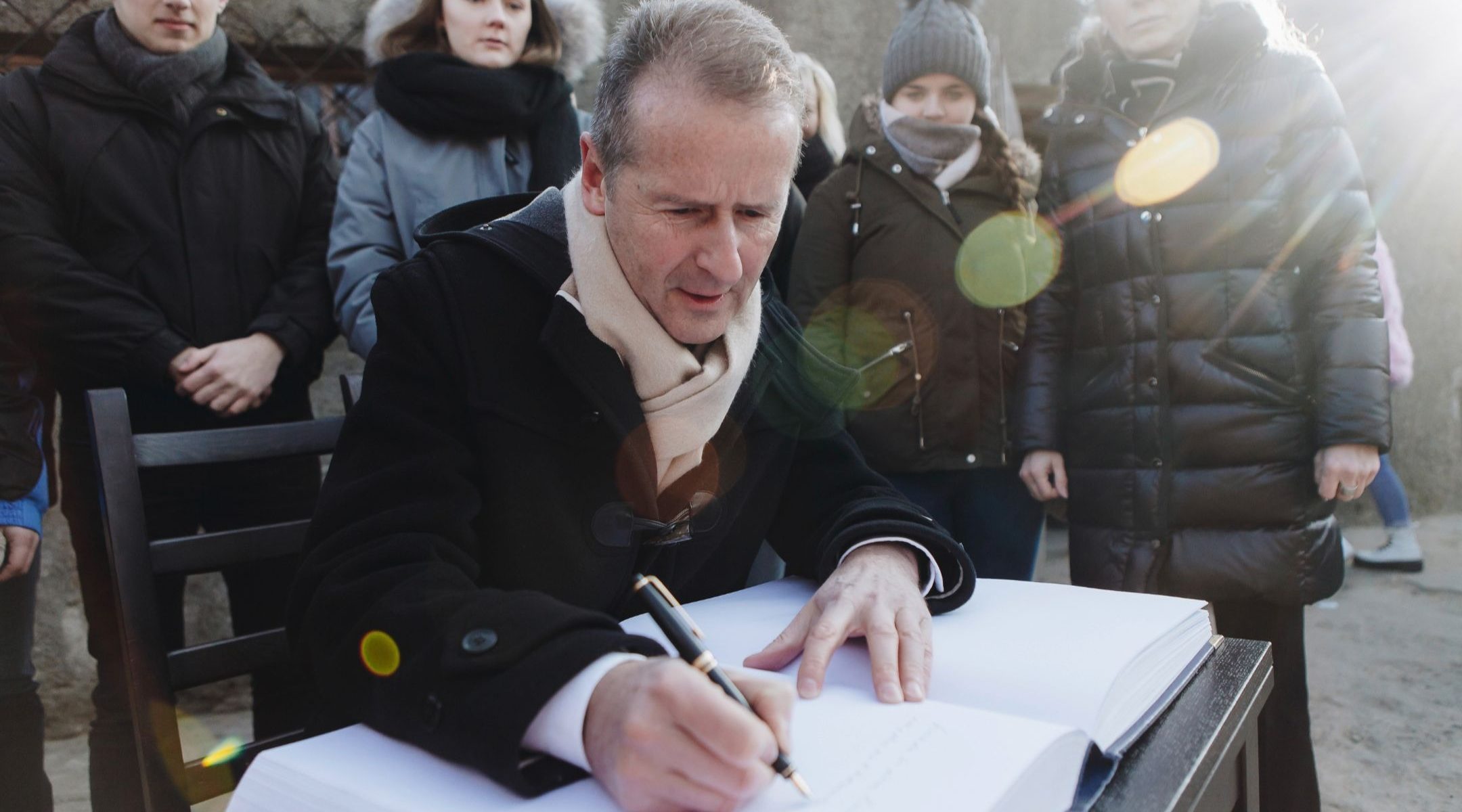 WASHINGTON (JTA) — Herbert Diess believes he has a special obligation to combat the rise of the far right in Europe because the company he leads was once quite literally its engine.

“Volkswagen has because of its history, and our history in the Second World War, we have an obligation to care about anti-Semitism and racism,” the Volkswagen CEO told the Jewish Telegraphic Agency in a rare interview this week. “We have more obligation than others. The whole company was built up by the Nazi regime.”

And now, alarmed by the boldness of the extreme right in Europe, Diess is taking action. The automobile manufacturing giant, which sells more cars than anyone else in the world, announced this week that it is funding the return of the Anti-Defamation League to Europe. The venerable Jewish civil rights agency has not had a presence on the continent since the early 2000s. At different times it once had offices in Moscow, Paris and Vienna.

The pick is significant: More than its other U.S. Jewish counterparts, like the American Jewish Committee and the Simon Wiesenthal Center, the ADL in recent years has emphasized above all the threat of violence from the far right. While it continues to speak out against anti-Zionism, the ADL has abjured to a degree the Jewish establishment’s reflexive both-sidesism that adds caveats about leftist anti-Semitism each time it emerges from the right.

Fueling the ADL’s change in emphasis has been the deadly violence that has emerged in the past two years from the right, including the neo-Nazi march in Charlottesville, Virginia, in 2017, which killed one counterprotester and injured 20; the murder of 11 worshippers at a Pittsburgh synagogue in 2018; and the deadly shooting at a San Diego synagogue in April that killed one worshipper and injured four.

Another spur has been President Donald Trump’s equivocation when asked to condemn violent acts by white supremacists, both after Charlottesville and a massacre at mosques in New Zealand.

“I don’t really” see white nationalism as a rising threat around the world, Trump said after the New Zealand murders. “I think it’s a small group of people that have very, very serious problems, I guess.”

The ADL has been a key actor in encouraging Democrats in Congress to push back hard against this perception, including at a congressional hearing last month that sought answers as to why under Trump, the Department of Homeland Security has shut down initiatives to track right-wing extremism.

The approach has earned the ire of some groups, especially the Zionist Organization of America, which regularly accuses the ADL of a “lack of attention to Islamic anti-Semitism” and for portraying “Trump and right-wing world leaders who truly love Israel and the Jewish people as anti-Semites or as empowering anti-Semitism.”

Unfazed, the ADL has cast far-right anti-Semitism as a global threat that must be addressed in European capitals as well as in the United States.

“We could not be more grateful for the opportunity to collaborate to strengthen this trans-Atlantic alliance,” ADL CEO Jonathan Greenblatt told JTA, discussing the support from Volkswagen.

Diess took time out from touring Volkswagen’s U.S. operations on Monday to announce the launch at the ADL’s annual Washington conference. His speech was off the record, but it echoed many of the precepts he put on the record in his interview with JTA earlier in the day in a tony office bleached white with stark lighting and space-age furnishings about 10 blocks from the White House.

The talks to establish the founding of an ADL office in Berlin have been underway for about a year, Diess said. But they acquired greater urgency recently with the release last month of an official German report showing a 20 percent spike in hate crimes targeting Jews and foreigners, and a recommendation later in May by the anti-Semitism commissioner in Germany that Jews not wear kippahs in public.

“Anti-Semitism is creeping up again, so clearly we have to do more. We’re doing nearly not enough,” he said.

Funding for the Berlin office will be in the low seven figures and will last for three years, with an option to continue, a Volkswagen spokesman said.

The ADL in its release listed four components for its initiative, which will include Germany and other European countries: education against bias in schools, in workplaces, lobbying in European capitals and research through surveys.

“The initiative will focus on assessing the root causes of anti-Semitism, extremism and bigotry in society and develop programs to counter it through advocacy and education, similar to the model ADL has used in the United States to fight anti-Semitism and discrimination against vulnerable populations for more than 100 years,” the release said.

German manufacturers, including in its automobile industry, were generally implicated in the Nazi regime’s crimes against humanity, particularly slave labor. Volkswagen became a symbol of the prosperous racially pure future Adolf Hitler promised Germans: affordable cars available to every German family. Photos proliferated at the time of Hitler inspecting prototypes.

With the launch of the war in 1939, Volkswagen switched to manufacturing armored vehicles, and it was among the first to use slave labor, mostly from the Soviet Union, but including hundreds of Jews from other parts of Nazi-occupied Europe. A company physician in charge of child care for babies born to the slave laborers was executed by the British after the war for neglecting the infants; their mortality rate at the “nursery” was close to 100 percent.

Since 1986, Volkswagen has endeavored to acknowledge its Nazi-era past, paying $2 million to underwrite a 10-year research project about its slave labor record that was published in 1996. The company offers its apprentices the option of spending two weeks at Auschwitz as part of their training; They learn about the Holocaust and restore the shoes of the victims that are displayed at the site as one of the only physical traces of their existence. Some 4,000 apprentices have taken up the option.

Diess, 60, toured Auschwitz in November and met with the apprentices. He frets at the return to Germany of anti-Semitic hatred that he says was largely unknown during his upbringing, noting that the school he attended in a town near Munich was named for the martyred Jewish diarist Anne Frank and educational visits to the Dachau concentration camp were commonplace.

“It’s really disturbing that the last five years it is creeping up again,” he said, noting the emergence of a robust far-right movement not only in Germany but in other European countries like Hungary and Poland.

He insists that Volkswagen’s own recent PR stumbles are not germane to the initiative with the ADL. In 2015, Volkswagen apologized for lying about violating emissions standards worldwide, and Diess himself was caught up recently in a faux pas. In March, speaking to Volkswagen managers at the company headquarters in Wolfsburg, he made a pun on the German acronym for earnings before interest, “Ebit,” saying “Ebit macht frei.”

That echoes the phrase “Arbeit macht frei,” “work makes you free,” which predates the Nazi era but has come to be irrevocably associated with the Nazis and adorned the gate at Auschwitz.

“Saying this in a place like Wolfsburg,” the site of the company’s one-time slave labor crimes, was insensitive, Diess told JTA.

“I regret that, and if someone was hurt, I apologize,” he said.

The ADL said in its release that the U.S. programming it plans to replicate in Germany includes training in combating anti-Israel bias. Diess was enthusiastic about the approach, noting the rise in Germany of anti-Jewish and anti-Israel hostility among Muslims, as well as Volkswagen’s extensive Israel operations.

Diess, wiry and generally of an energetic, happy disposition, grinned in describing his company’s investment in an Israeli startup that hopes to have an electric self-driving, ride-hailing service on the roads by 2022.

“We are fighting both things,” anti-Israel and anti-Jewish bias,  he said.

“This is a personal view: The Jewish people are making such an important contribution to the world, in science, in arts, in trade, in business,” Diess said. He added that “it is important to work with Israeli companies, it makes sense, on the one hand, because of our history.”

On the other hand, he said, reverting to efficient CEO mode, it also has “nothing to do” with our history.

“Israel,” he said, “has become a hub and a center of [research into] autonomous vehicles.”