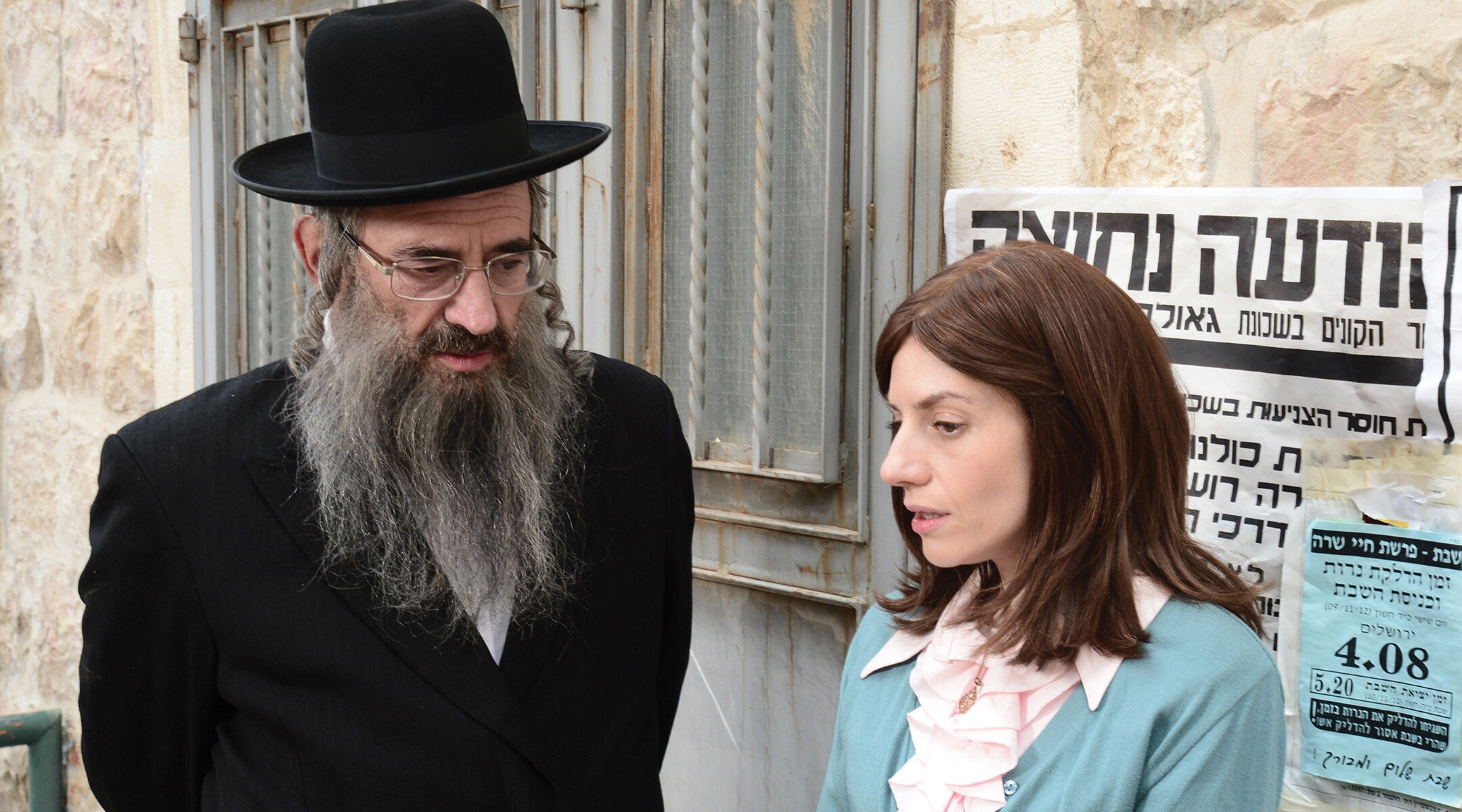 Riskin as Giti Weiss, above, with Doval’e Glickman as Shulem Shtisel, and right as secular Tel Avivi. (Ohad Romano)
Advertisement

SEEING GITI WEISS SLEEVELESS AND IN black leggings, as she is for our lunch at a Tel Aviv café, leaves some “Shtisel” fans devastated. “One man just dropped the things in his hands, and said he was disappointed,” she recounted. “He said, ‘I thought you are real.’”

Of course, I’m not actually dining with Giti, the fictional ultra-Orthodox Jerusalemite, but Neta Riskin, the non-religious actress from Tel Aviv.

Riskin dislikes Jerusalem, a “depressing” place where she feels “choked.” Her antipathy for the city is so strong that she was originally reticent about auditioning for “Shtisel.” Her character is a mom always surrounded by kids, but in real life she doesn’t have children or a partner, or, naturally, an ultra-modest wardrobe like Giti’s.

Riskin’s achievements go far beyond “Shtisel.” Though she didn’t decide on a career in acting until she hit 30, around 2006, she has become an icon of Israeli acting. She starred in the psychological TV thriller “The Gordin Cell” and the movie “Shelter,” in which she plays a Mossad agent. As a “sideline” she is an accent coach, her most famous client being Natalie Portman, whom she taught to perfect her Hebrew for her role as Amos Oz’s troubled mother in “A Tale of Love and Darkness.”

When Riskin started her training to portray Giti, with the help of a charedi expert, “I thought it would be all about religious beliefs, but she said it’s not about beliefs but about how you behave.” Hence, Giti’s ramrod straight sitting posture, often with eyes lowered.

Riskin believes that the writers’ decision to mostly sidestep matters of faith and belief, and focus instead on social behavior, is what has made “Shtisel” such a success. And this approach will ensure that writers steer clear of stock storylines in dramas about Orthodox Jews that many viewers are anticipating.

While she won’t talk about plotlines for future episodes, she does say that fans won’t be seeing characters having crises of faith and leaving the charedi fold. “People are waiting for a character who will break out, but it’s not an option there.

“The people in ‘Shtisel’ don’t look for a way out; they like their life and they don’t see anything wrong with it — that’s their community and family, and they don’t want out.”

But what about her husband Lipa, I shot back. Didn’t he more or less break out by going AWOL to Argentina, leaving rumors swirling that he’d taken up with a gentile woman? “We don’t know what he’s done,” she replied. “I have absolutely no idea.”

When Lipa finally returned home, and fans were yelling at their screens, urging Giti to give him a piece of her mind and uncover all the details of his disappearance, she calmly served breakfast and carried on as normal. When he tried to discuss his disappearance with her in the bedroom, she said she was tired, and the conversation has never happened.

Riskin admitted that the breakfast scene was “shocking” to her when she read the script. But she believes Giti’s “what-good-can-come-from-knowing?” ethos is true to her character.

She says Giti is “really challenging” to play because of her complexity. The character is determined that she won’t be pitied, that her children won’t be stigmatized because of family problems becoming public, and that she will retain her image as a pillar of strength.

“The reason Giti is stronger than the other characters is because she knows all along what she wants,” said Riskin. “She is a woman who didn’t believe in her abilities to survive, but then finds she can.”

“Shtisel” hasn’t changed Riskin’s attitude towards Judaism or warmed her to tradition, and she says she is now more convinced than ever that religion and state should be separated in Israel.

Riskin is candid about Giti, praising her good qualities and highlighting her shortcomings. She’s quick to criticize Giti’s parenting style, saying that her emotional dependence on her daughter Ruchami turned the girl almost into a “husband” figure — “traumatizing her” along the way. Yet she’s full of admiration for Giti’s strength, and thinks the way she masks her hurt and loneliness is empowering. “We always think suppressing is the worst [approach], but in some cases it can serve you well.”

Riskin is amused that she has unwittingly sparked wonky talk among fans about Giti’s wardrobe. She showed me one of many online threads about the symbolism of costume and set design. Her outfit — striped like that of a prisoner — was praised for implying imprisonment.

“It’s bull—-,” she said, revealing that the only reason the character is regularly seen in stripes is that she hates Giti’s “ugly” wardrobe — kept dull as she isn’t courting — and asked for stripes to brighten things up.

During filming for Season One, “we used to laugh and say no one is going to watch it anyway, it’s very niche.” But, of course, the show developed a mass following, and Riskin finds the exegesis that has resulted funny — though not alien. “I do the same with ‘Game of Thrones,’” she admitted