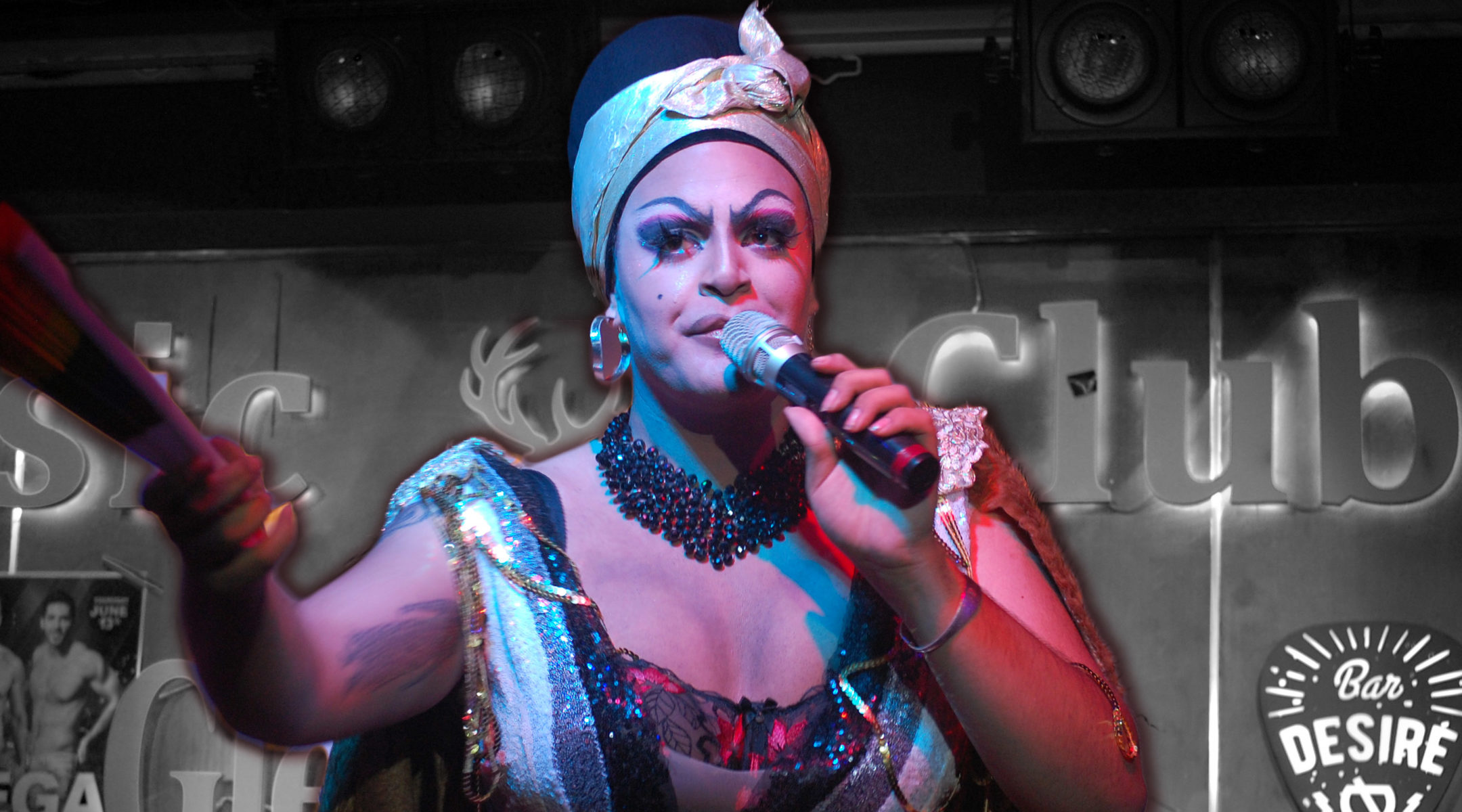 TEL AVIV (JTA) – The dimly-lit nightclub’s anxious patrons snap to attention when the “Fiddler on the Roof” song “Tradition” wails through the speaker.

Onto the small stage strides a busty Mizrahi woman, her lips defined by serious black lipstick and hair concealed by a luminescent headscarf. She is dressed as a parody version of a Hasidic man, wearing a long black coat over her frock and a top hat perched atop her kerchief-covered hair.

She clasps her hands, furrows her eyebrows, purses her lips and exclaims, for anyone still confused about what she’s performing, “Kanar al hagag!” — the movie’s title in Hebrew.

Her outsized presence easily overwhelms the stage and small club as she enthusiastically staggers around, waving her fists at the sky and dancing as only a Hasid knows how. During the furious performance, she tears off her garments to reveal an entirely new costume a full six times, depicting one stereotypical religious Jew — some male and some female — after another.

But the performer is in reality neither a woman nor a Hasid, but the 20-year-old genderqueer drag queen, combat soldier and political activist Mama de la Smallah, who switches between pronouns as easily as costumes. His journey to the stage was filled with twists and turns – and she’s only just getting started. 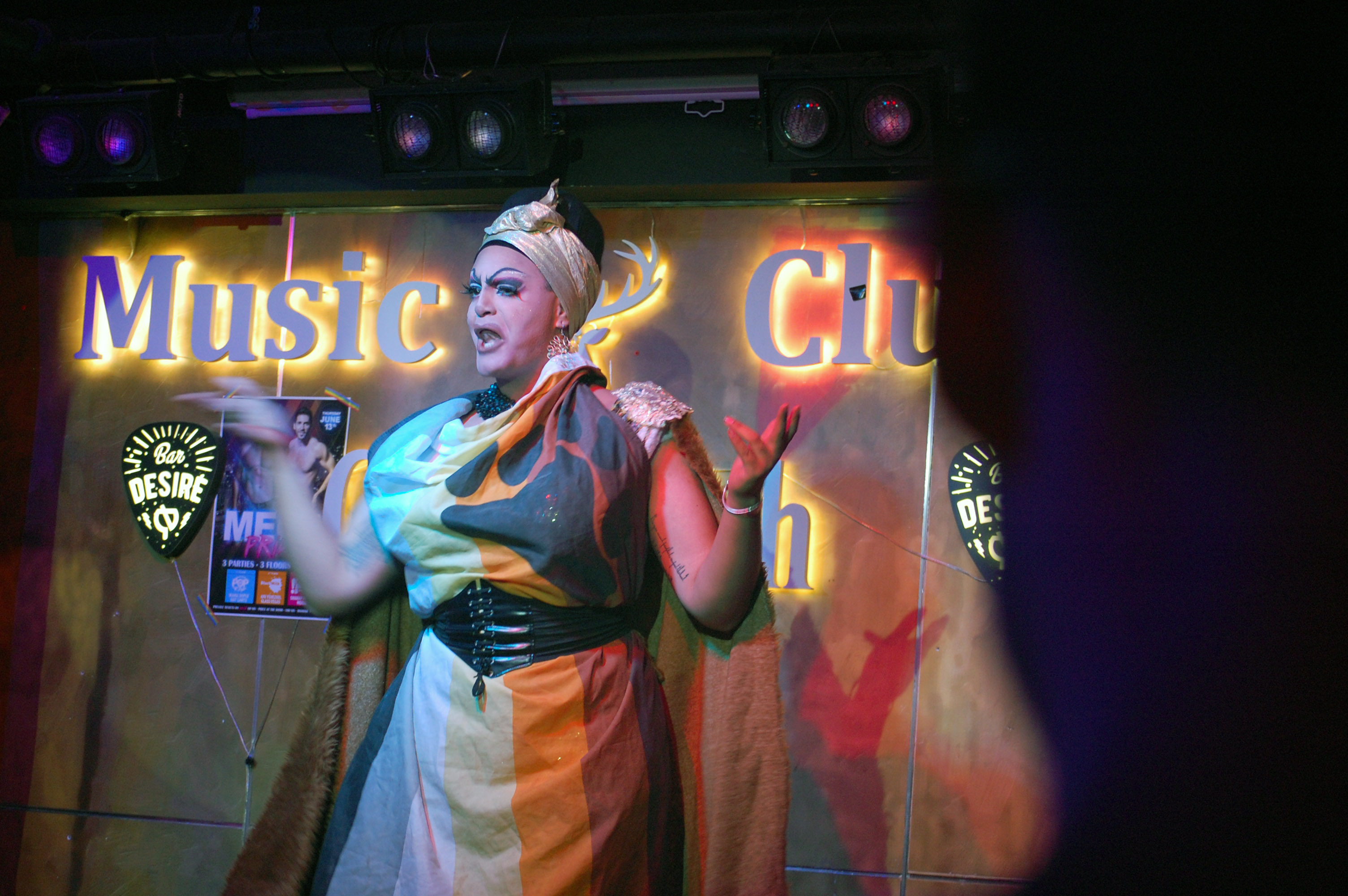 Drag has been around for centuries, but the art form is undeniably having a moment. Today, the 11 seasons (and counting) of “RuPaul’s Drag Race” can be streamed in high-definition on Netflix. Winning queens might not yet be household names, but they regularly secure lucrative high-fashion modeling contracts, charge thousands of dollars per performance and amass millions of followers on social media.

But for most of queer history – and in most parts of the world – a man daring to dress and perform as a woman is still a radical act. And while Israel certainly treats its LGBTQ citizens much better than most of their neighboring countries do, queer Israelis still have limited marriage, adoption and surrogacy rights.

This fight for equal rights, and the struggle to be taken seriously, is how Mama was born. 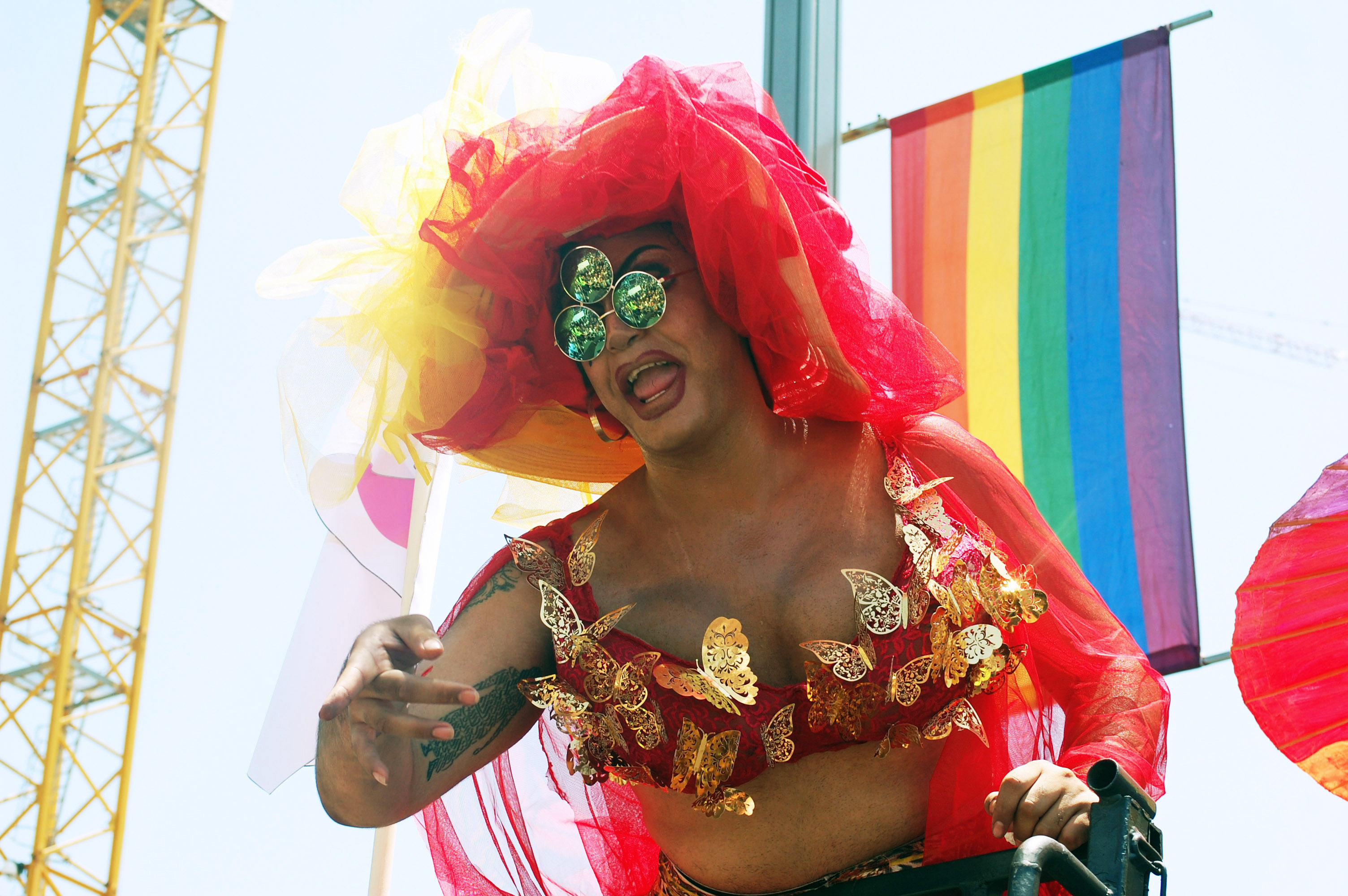 At the 2019 Tel Aviv Gay Pride Parade, Mama de La Smallah seems to have made it. She shared a float with the American TV star Neil Patrick Harris, wearing a red chiffon number adorned with dozens of gilded butterflies, which she designed and sewed herself. Hundreds of thousands of ecstatic sweat-drenched Israelis and tourists marched along with her, sweltering in the Mediterranean sun.

But Ellen Best, Mama’s name when not in drag, would be the first to tell you that the glitz and glamour are far from the point. In fact, Mama De La Smallah debuted not in a parade sponsored by the Israeli government, but as an act of protest against its treatment of its LGBTQ citizens.

“I’m a protest queen,” Best said proudly. In July 2018, he took his drag to the streets in a big, street-closing protest with 100,000 people in Tel Aviv’s Rabin Square over the issue of LGBTQ surrogacy, which is severely restricted in Israel.

Though he’d been experimenting with drag on and off since 10th grade, this was the first time Mama De La Smallah made a public appearance.

“The fun is the fun, but the job is to connect other people. Drag is about connecting the community,” he said in June over tapas at a trendy South Tel Aviv restaurant.

When not in drag, Best carries himself with a quiet confidence. He has thick tattoos on both thighs and, though he doesn’t drink much alcohol, chain-smokes Winstons, puffing big clouds of smoke even when indoors. If you try to rush through a crosswalk when the light is red, he may admonish you for not using the time to observe the world around you, and point out the architectural layers of the city in the same breath.

Best is a child of the periphery. He was born in Beer Sheva in 1998 and grew up in Dimona, a town best known for its “secret” nuclear reactor and home to Hebrew Israelites, Russian Jews and a religious Mizrahi community. He cites these colorful and disparate influences, along with his grandmother, as inspiration for the character of Mama.

Best has one older sister, two younger half brothers, an Indian Jewish father and a mother whose parents are haredi supporters of the Mizrahi ultra-Orthodox party Shas. His parents divorced when he was one, and he grew up “so poor that I didn’t realize that I didn’t have money.” In seventh grade, Best transitioned from religious to secular public school, where he attended dance classes instead of soccer because he was “a fat kid and I didn’t like to run.”

He was also bullied because of his long eyelashes. His classmates taunted him, saying he wore mascara, asserting this as undeniable proof that he was gay.

“In 8th grade, I thought, maybe I’m gay,” Best tells me, but he says he didn’t really know because didn’t even fully comprehend what that meant. He didn’t have a computer in the house, and his haredi grandparents weren’t exactly hosting candid discussions on human sexuality.

In 2014, at age 14, he first attended the Tel Aviv Pride Parade with some friends from IGY, an organization for LGBTQ Israeli youth – and came out to his mother a week later. 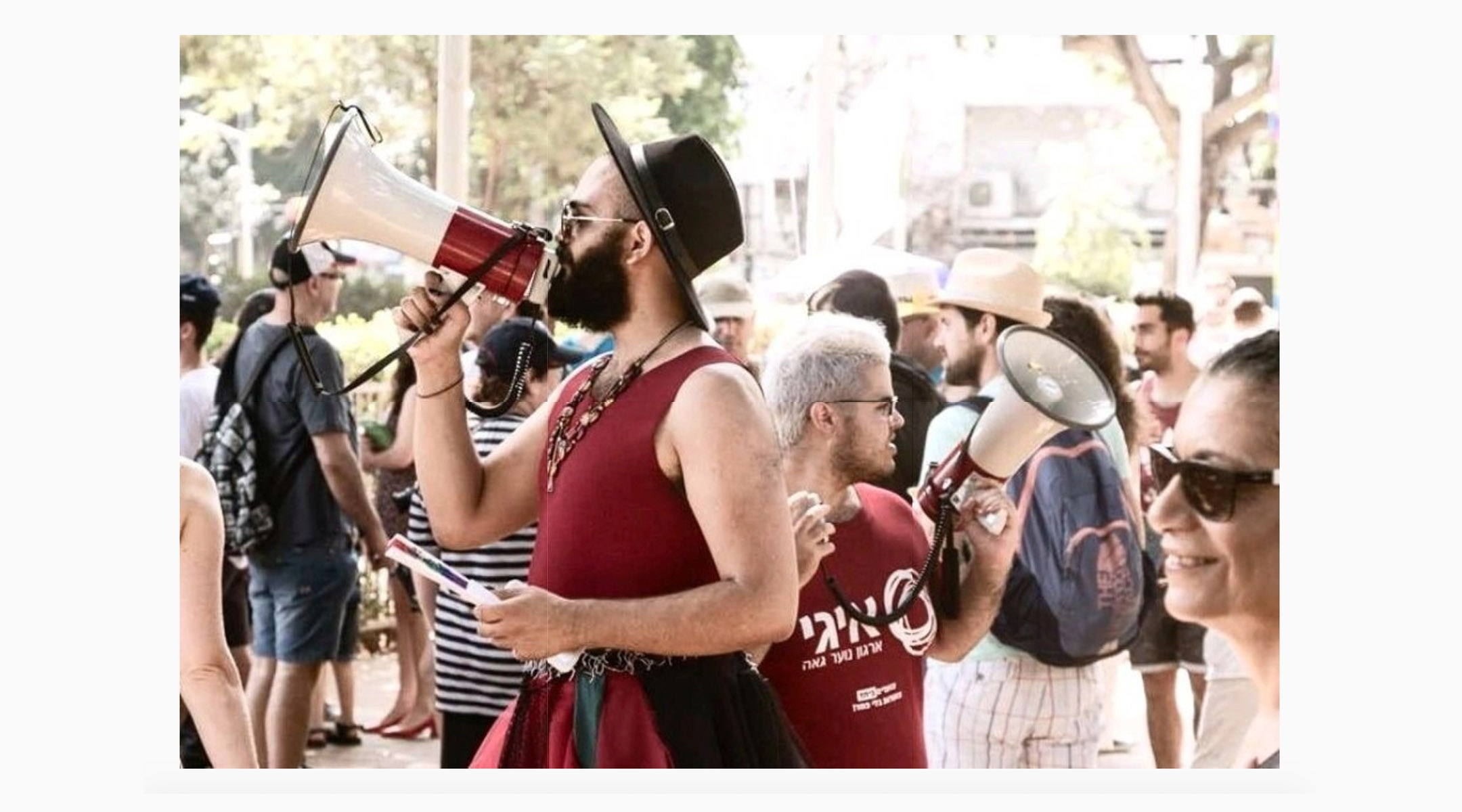 Ellen Best at a protest over LGBTQ surrogacy laws in Israel. (Courtesy of Best)

She didn’t quite know how to respond at the time, Best tells me. But about 6 months later, she had a coming out of her own: She told Best that she was an asexual lesbian, which means that she is not sexually attracted to anyone but is romantically attracted to other women. Best, in hindsight, speculates that this could have been because “they were very poor; my mom wasn’t thinking about relationships.”

Tragically, one year after Best came out to his mother, she got cancer.

When he turned 18, Best enlisted in the Israeli Defense Forces. Although he grew up living with haredi grandparents — it’s uncommon for haredi Jews to serve in the military, and when they do they are often ostracized by their communities — Best always knew that he wanted to serve. After high school, he and a friend enlisted in a program that involved service in Karkal, a light infantry combat unit that serves on Israel’s border with Egypt.

His mother died during his national service.

In many respects, his haredi grandparents have been remarkably tolerant of his lifestyle. His grandfather banned his own sister from the house when she spoke approvingly about conversion therapy at the Shabbat table.

His grandmother, he says, also “understands the passion” for why he does what he does, “but not the cause.” Best says he has a lot of other queer people in his family, including a trans uncle, but he was the first one to say, “hello, this is me, deal with it.”

While he can’t discuss his army service on the record, once he was finished with his time in Karkal, Best moved to Tel Aviv and got serious about drag. In Israel, like in the United States, serious drag performers often join houses, makeshift families of performers who look out for one another, sometimes living together and even taking a shared household name. Best is a member of WERK, a line of the house of Por De Bra, run by drag mother Galina Por De Bra (Gil Naveh).

While Best’s activism primarily focuses on LGBTQ issues, his drag persona highlights another pervasive tension in Israeli society. Jews from the Middle East and North Africa, commonly referred to as Mizrahi Jews, have long faced discrimination in Israel. While their descendants comprise a majority of the country’s Jewish citizens, their culture and language – much like queer culture and vernacular – are either appropriated or treated as a joke.

That’s one of the many reasons Mama’s performances are so powerful: With her voluminous headpieces, Middle East-inspired clothing and exaggerated curves, she is parodying not only Mizrahi women, but Mizrahi women as seen through the judgmental Ashkenazi gaze. By leaning into the absurdity of that view, she’s refracting some of that prejudice back into the eyes of those who have perpetuated it.

“I am speaking in Hebrew, thinking in English and paid in Mizrahi,” Best tells me, paraphrasing the Mizrahi poet Adi Keissar’s “I am the Mizrahi,” a scathing poem about her experience of racism in Israel.

Mama is unquestionably a rising star in the Tel Aviv drag scene. But his day-to-day reality is far from a cakewalk. He performs as Mama two to three times a week in the busy season, but sometimes only a few times a month.

Although the designer Liron Mar Mar, who he met through his drag house, has taken him under her wing, drag is still an expensive art form, and performers are typically responsible for paying for all that goes into their hair, makeup, costumes and performance. At this point, “the drag pays for the drag,” Best tells me.

Five years from now, Best plans on making more of Mama’s own performance clothes, starting a fashion line, making a name for herself outside of Israel and being even more political in drag.

Wherever Mama appears, whether crooning in a dusky club, haggling in the Jerusalem shuk at high noon or in the heart of the raucous chaos of the Pride Parade, one can’t help but feel that those around her are teetering ever closer – but not quite close enough – to the edge of being ready to internalize the political, cultural and artistic messages she embodies.

Even in liberal Tel Aviv, there’s certainly a lot of progress, both political and artistic, for Mama to make.