Here are 6 favorite Jewish foods you should stop eating 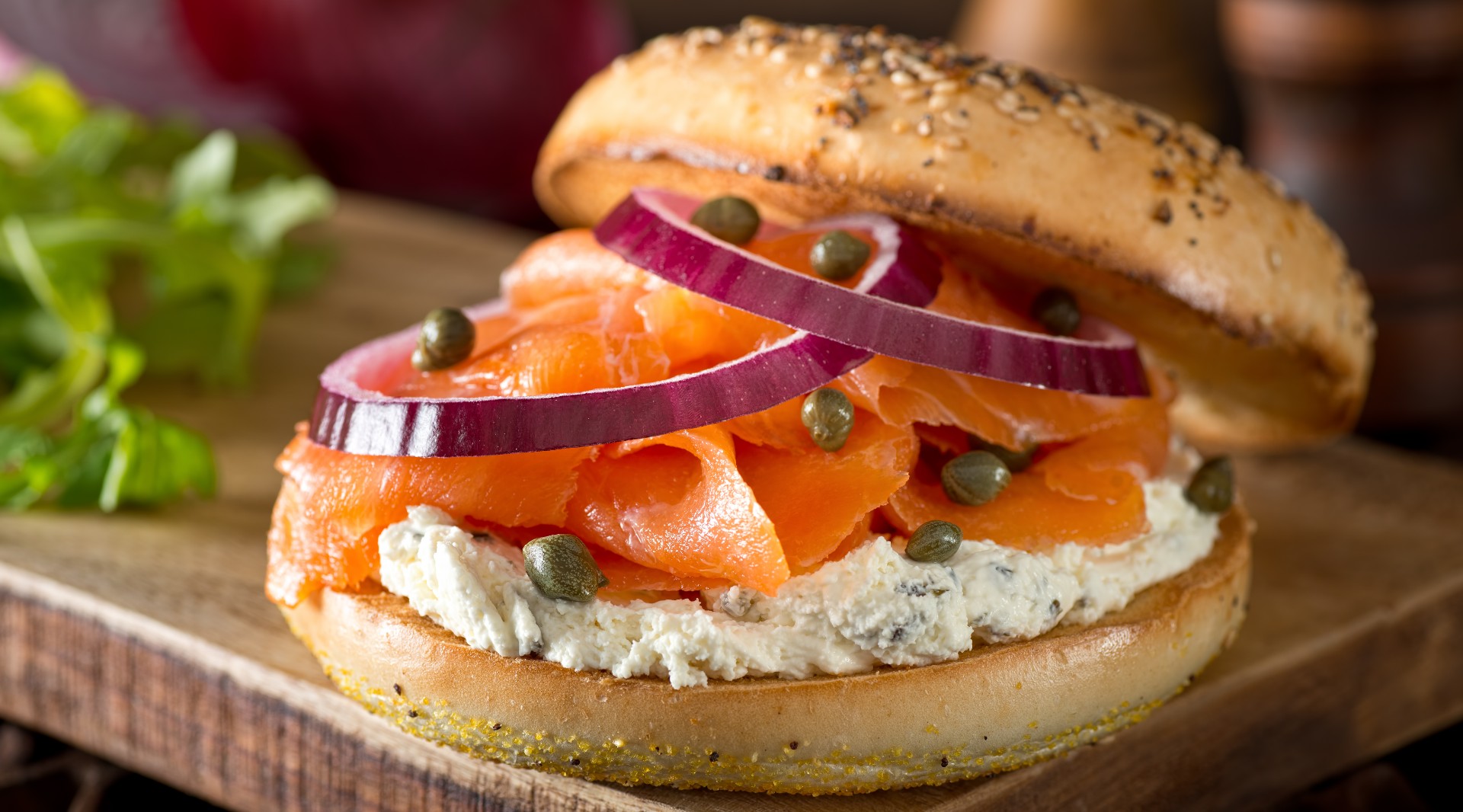 A bagel with lox and cream cheese is supremely unhealthy. The bagel alone has the nutritional equivalent of five slices of white bread. (Fudio/Getty Images)
Advertisement

With summer barbecue season finally here, Americans everywhere will be firing up their grills and feasting on their favorite foods.

But many of our culinary indulgences come with a cost. We’re not just talking about foods that are overly salty, fatty and sugary. There are foods that actually raise your risk for developing cancer — including some much-loved American Jewish classics.

“You want to have a diet of mostly healthy whole foods, and you want to proceed with caution and have a smaller portion of these Jewish delicacies that do not promote health,” says nutritionist and author Lisa R. Young.

It may be hard to avoid such foods entirely, Young says, but exercising portion control is essential.

Here are some classic favorites you might want to think twice about due to their potential to increase the risk of cancer.

It doesn’t matter what kind of meat you’re barbecuing, or whether you’re doing it over wood, charcoal or gas. Overly blackened or burn marks on most foods cause heterocylic amines, or HCAs, which have been proven to cause cancer in studies on animals. HCAs form when amino acids and creatine, a chemical found in animal muscles, react at high cooking temperatures. Fire from wood, charcoal or gas also emits polycyclic aromatic hydrocarbons, known as PAHs. According to the National Cancer Institute, both HCAs and PAHs can be mutagenic, which means they cause changes in DNA that may increase one’s cancer risk. Marinating foods bound for the grill can alleviate this somewhat, but the best remedy is to keep careful watch to make sure your food cooks evenly but doesn’t burn.

Pastrami, salami, hot dogs — there’s so much unhealthy stuff here it’s hard to know where to start. These foods all contain nitrates or nitrites, preservatives used to cure meats that prevent them from spoiling and give them that rosy color. But nitrates and nitrites are known carcinogens, occurring both naturally in some foods and as an additive in others. Nitrites can damage cells and react with other molecules found in food to create an enhanced cancer risk. For this reason, these Jewish delicacies top the list of foods to avoid when thinking about optimizing one’s diet.

Jews have a long tradition of consuming organ meats, from the Ashkenazi Jewish favorites chopped liver and kishke (cow intestine stuffed with gizzards, shmaltz and vegetables) to the Sephardic dish known as Jerusalem mixed grill, which consists of spicy sautéed chicken hearts, spleens and liver, often served with warm hummus or in a pita. Organ meats are a mixed bag: On one hand, they are packed with nutrients like vitamin A and folic acid, both of which are good for the heart. On the other hand, they are extremely high in saturated fat and cholesterol. While a high-fat, high-cholesterol diet is bad for the heart, studies show such diets are also associated with colorectal, breast, ovarian and prostate cancer. 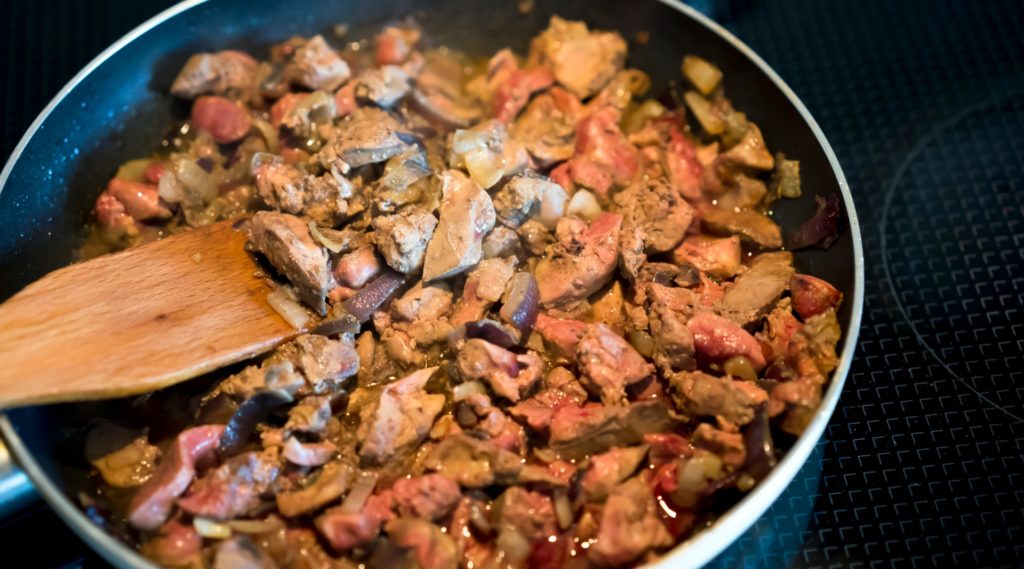 Liver and other organ meats, sauteed or chopped, are extremely high in saturated fat and cholesterol, which are associated with a variety of cancers. (Vitpho/Getty Images)

Sadly, it’s best if latkes and other fried foods are kept to a minimum. When food is cooked at very high heat, an amino acid called asparagine can react with sugars to produce acrylamide. This happens especially with latkes, since potatoes are high in sugar content. The chemical acrylamide is used in all kinds of industries to make dyes and plastics. When consumed by the human body, acrylamide is converted into a compound called glycidamide, which can cause DNA mutations that may lead to cancer.

This one is a real heartbreaker, because what Jewish occasion doesn’t call for a nice salmon, fresh, smoked or poached? Unfortunately, experts say, farmed salmon has on occasion been contaminated with chemicals that could be carcinogenic. Don’t let fish labeled “Atlantic salmon” fool you — there are large salmon farming operations in the Atlantic Ocean, where most salmon is farmed in this country. When buying fresh fish, always try to go with wild.

Lox, that Jewish favorite, is not as healthy as we would hope. If it’s farmed, it could have those dangerous chemicals that sometimes are associated with farm-raised fish. Even if it’s wild, smoking the lox often leads to the presence of nitrates, and the smoking process itself can add additional carcinogens. With bagels, lox and cream cheese, the whole package is unhealthy, according to Young.

“A bagel is the equivalent of about five pieces of white bread,” Young says, and cream cheese is essentially a combination of cream and milk that gives it a high fat content.

Young spoke about nutrition at a recent Israel Cancer Research Fund (ICRF) event where she stressed that moderation is the key to healthy eating.

Young advocates for a diet low in calories that includes a variety of foods focusing on fruits, vegetables, whole grains, lean meats, and vegetable oils. Hold the pastrami and knishes.

“While most causes of cancer are unknown, reducing environmental factors like unhealthy diets is important,” according to Dr. Mark Israel, the former director of Dartmouth College’s National Cancer Institute-designated Comprehensive Cancer Center and now the national executive director of the Israel Cancer Research Fund, the largest nonprofit organization dedicated solely to funding cancer research in Israel.

“Environmental exposures that impact on cancer risk, such as known carcinogens that are present in trace amounts in certain foodstuffs, can provide opportunities for individuals to decrease their risk of cancer by modifying their exposure to known hazards,” Israel comments.

“Further understanding of how such exposures contribute to the development of cancer can provide opportunities to interrupt those processes,” Israel says. “That’s another key area in which we are focused.”