The Jews getting arrested at ICE centers are just getting started 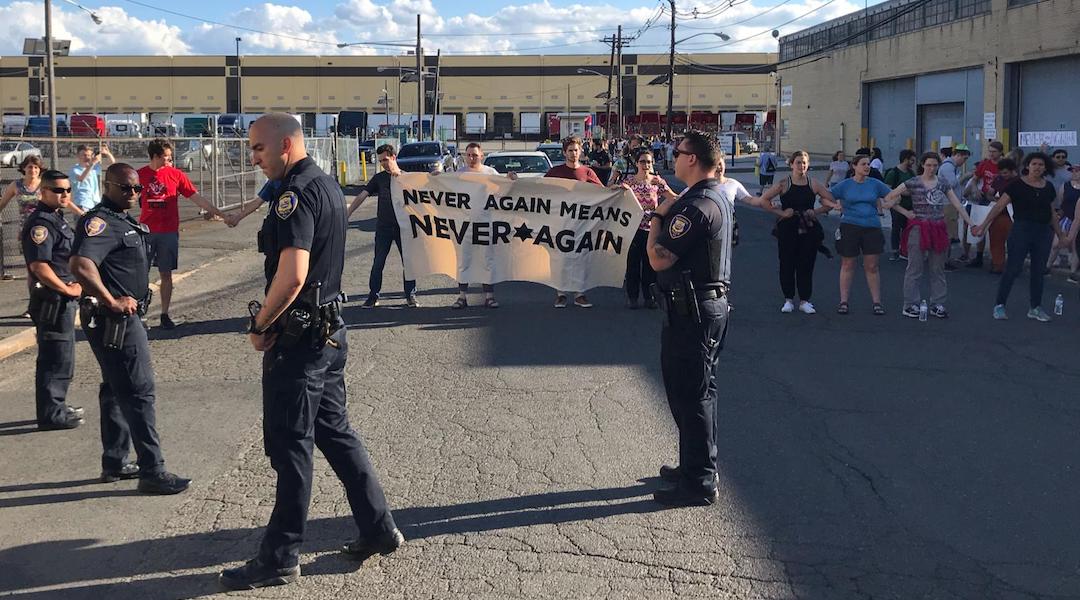 Police stand in front of protesters at a demonstration at an ICE detention center in Elizabeth, N.J., June 30, 2019. (Naftali Y. Ehrenkranz)
Advertisement

NEW YORK (JTA) — If you’re going to physically block an entrance to an ICE detention center, the handbook says, don’t act nice about it.

Do chant in Yiddish. Do sing Hebrew prayers.

“Defiant, angry, urgent, Jewish,” reads the #NeverAgainIsNow Action Toolkit, a six-page Google Doc meant for Jews planning to protest at Immigration and Customs Enforcement detention centers. “The goal is to actually make it impossible for ICE and/or the Democratic Establishment to do business as usual. Find the chokepoint and shut it down — we are not f**king around here.”

This is the digital handbook for a protest movement called Never Again Action that was born two weeks ago and is growing fast. The movement’s first action was to protest at an ICE detention center in New Jersey, where 36 people were arrested. Two days later, 18 people each were arrested in similar actions in Boston and Washington, D.C.

In Boston and New Jersey, the protesters were arrested at the entrance to the detention centers. In Washington, they were arrested in the rotunda of the Cannon House Office Building.

At least six actions in total have taken place at ICE facilities across the country, co-sponsored with other groups, according to Sophie Ellman-Golan, an organizer of the New Jersey demonstration. Never Again Action is planning another demonstration in D.C. on Tuesday to culminate this round of protests, though movement leaders say it’s only the first stage of a broader campaign.

“What is happening at the border is an abomination, but I also know that there are children in my own city, in my own community, that have gone to bed over the last three weeks without their parents,” said Amy Fischer, 33, one of the Washington protesters who was arrested. “I was trying to make a loud statement that what was happening was unacceptable and until these camps are shut down we will continue organizing.”

The demonstrations, which are live-streamed on social media, employ Hebrew songs and Jewish chants. In Chicago, protesters sang a Hebrew song that translates to “An eternal flame will be lit on the altar.” In Washington, Fischer said, the arrested protesters sang “Oseh shalom,” or “God who makes peace” while they were being carted off. The organization’s materials suggest saying the Mourner’s Kaddish for migrant children who have died in U.S. custody.

The protesters’ goals, organizers said, are to draw attention to the detention of migrant families and children, close the detention centers, reunite separated families and ensure protection for undocumented immigrants in the country. Activists acknowledged that marches alone cannot bring the results they are seeking. But they hope they can act as a motivator for officials to make policy changes.

Never Again Action’s materials say Democrats as well as Republicans bear responsibility for the conditions in the facilities.

“Many major civil rights movements in the U.S. have been led by civil disobedience,” said Julia Davidovitz, 26, one of the organizers of the New Jersey protest. “I think it’s a really important element of catalyzing the government to make a change, lighting a fire under their asses.”

When the group uses the phrases “Never again” and describes the detention centers as “concentration camps,” it’s intentionally alluding to the Holocaust. The protesters believe that what’s happening at ICE facilities is an atrocity, and that the Jews’ history of persecution, especially at the hands of the Nazis, compels them to act on behalf of other persecuted groups.

In that way, the group is explicitly taking a side in a debate that has raged ever since Rep. Alexandria Ocasio-Cortez, D-N.Y., called the detention centers concentration camps nearly a month ago. Organizers dispute the claims of Ocasio-Cortez’s critics, who say the comparison to Nazi concentration camps both overstates the situation in ICE facilities and trivializes the Holocaust.

“I think we should be using the strongest possible language to describe what’s happening because we’re witnessing an atrocity,” said Ellman-Golan, 27. She said those who have spent more energy condemning the language than the actual conditions in the camps were exercising “deeply selective outrage.”

Never Again Action draws on some of the same cohort of youthful activists who have riled legacy Jewish groups, either because they can be harshly critical of Israel or ally with others who are. But while several establishment Jewish groups condemned Ocasio-Cortez’s use of Holocaust terminology, there has been little public Jewish criticism of the Never Again Action protesters and demonstrations. In the past, Jews across a wide political and religious spectrum have supported immigrant and refugee rights.

Mark Hetfield, CEO of HIAS, the Jewish refugee aid organization, said he thinks the Holocaust analogy is inappropriate but the protests are worthy.

“I think their actions are terrific,” he said. “I totally support the protests themselves. This is something we need to be protesting. These are basically atrocities that the United States is committing along the southern border. I applaud their tactic of civil disobedience as well.”

Other Jewish organizations also are working on behalf of the migrants, especially as the Trump administration plans a mass roundup of undocumented immigrants on Sunday. T’ruah, the liberal rabbinic human rights group, runs a network of synagogues that provides or assists with sanctuary for undocumented families, has sent delegations to the border and has had members who have participated in the Never Again Action protests. HIAS has deployed lawyers to provide aid on the southern border and soon will do so in northern Mexico.

Boston’s Jewish Community Relations Council, an umbrella local policy group, has provided bond for 90 detained migrants. It accompanies undocumented immigrants to check-ins with ICE, and is encouraging synagogues to provide sanctuary. While the JCRC does not endorse civil disobedience, its director, Jeremy Burton, spoke kindly of the Boston demonstration Tuesday.

“I think that we all have an obligation to demonstrate our horror with what our government is doing,” Burton wrote in a text message. He invoked the 1938 burning of Munich’s synagogue to say that “when good people remain silent, those in power who seek to do bad things will take this as a sign that they can get away with even worse human rights violations.”

The New Jersey protest came together within six days through a group of activists who were connected through other progressive Jewish groups like Jews for Racial and Economic Justice and IfNotNow, the millennial Jewish group that protests Israel’s West Bank occupation. The Never Again Action guidelines for a pre-demonstration huddle talk about referencing “INN principles.”

While IfNotNow and Never Again Action share some methods, chants and activists, organizers from both groups said they are independent of each other.

The protests ban flags of any kind, including Israeli and Palestinian flags, seeking to keep the focus on U.S. policy. Debates about Israel and the progressive agenda have derailed the message of other protest groups, including the Women’s March, where Ellman-Golan works as the director of communications and digital outreach.

Ellman-Golan said she wants as many Jews as possible to join the movement.

“We’re asking Jews to show up,” she said. “We’re asking people who agree that human rights abuses are being committed. I would be sad if folks do not feel welcome.”