Rescued twice: The archive that survived the Holocaust and the AMIA attack 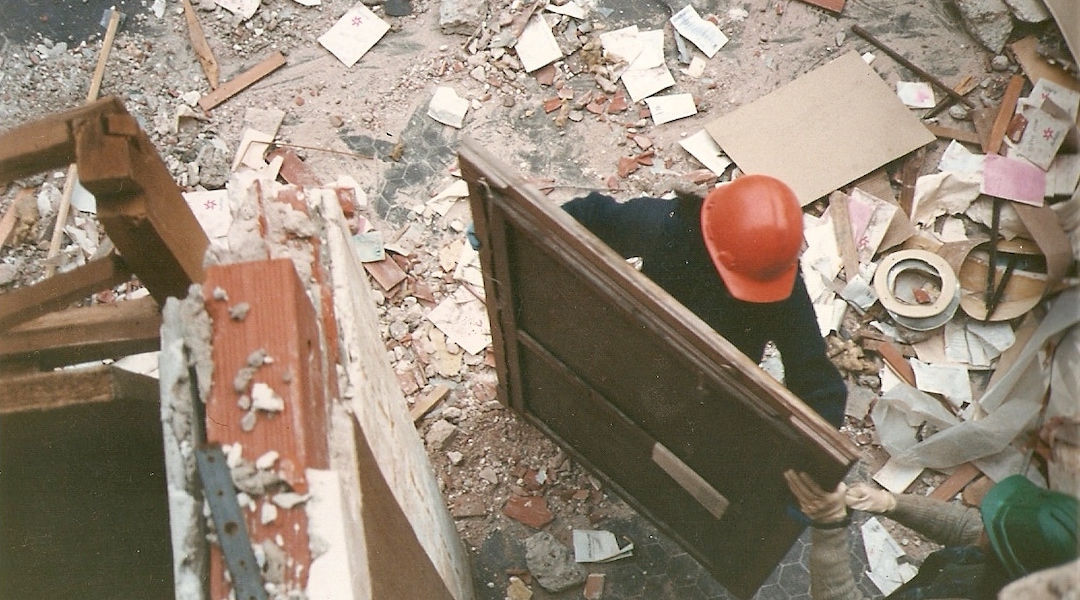 Ester Szwarc, the academic coordinator of the AMIA building's Idishe Wiesenshaft Institute, or IWO, said the archive had split in two “like an apple" on July 18, 1994. (Courtesy of IWO)
Advertisement

(JTA) — Abraham Lichtenbaum was getting ready to leave his house on July 18, 1994 when, at 9:53 a.m., he heard an explosion: The headquarters of Argentina’s 200,000-strong Jewish community, the AMIA, located less than four miles from his home, had been bombed.

Eighty-five people died and 300 were injured in what has become Argentina’s biggest terror attack. Lichtenbaum worked in the building and typically arrived there at 9 a.m. But he had been up the night before recording a weekly radio show at Radio Chai and on Monday mornings would usually come in at 10:30. This is what saved his life.

No record or artifact is more valuable than any of the lives lost on that day. But thanks to Lichtenbaum and others, the attack by terrorists linked to the Iranian-backed Hezbollah could not snuff out the Jews’ devotion to their history. In the days following the attack, they and a small army of volunteers managed to preserve not only pieces of Argentine Jewish history but memories that survived the century’s greatest Jewish tragedy.

Ester Szwarc, academic coordinator of IWO, is also alive today because of luck. Work was slow due to winter vacations and Szwarc had plans to go by the office to pick material for some festivals she was organizing. She had no morning shift during that time, so she was running later than usual. She heard news of the tragedy from a student who called to see if she was alive.

Upon reaching the site, Szwarc found the building had split in two, “like an apple.” The front part, where IWO’s reception office and part of the archive used to be, was demolished. Those offices also contained archives: encyclopedias and records with Jewish-Argentine music dating back to 1912, as well as documents and archives attesting to 50 years of IWO Buenos Aires’ institutional life — and catalogs of the library and the overall collection.

But the back part, which hosted the library and archives, was still standing, the building’s entrails exposed to the rain and wind. 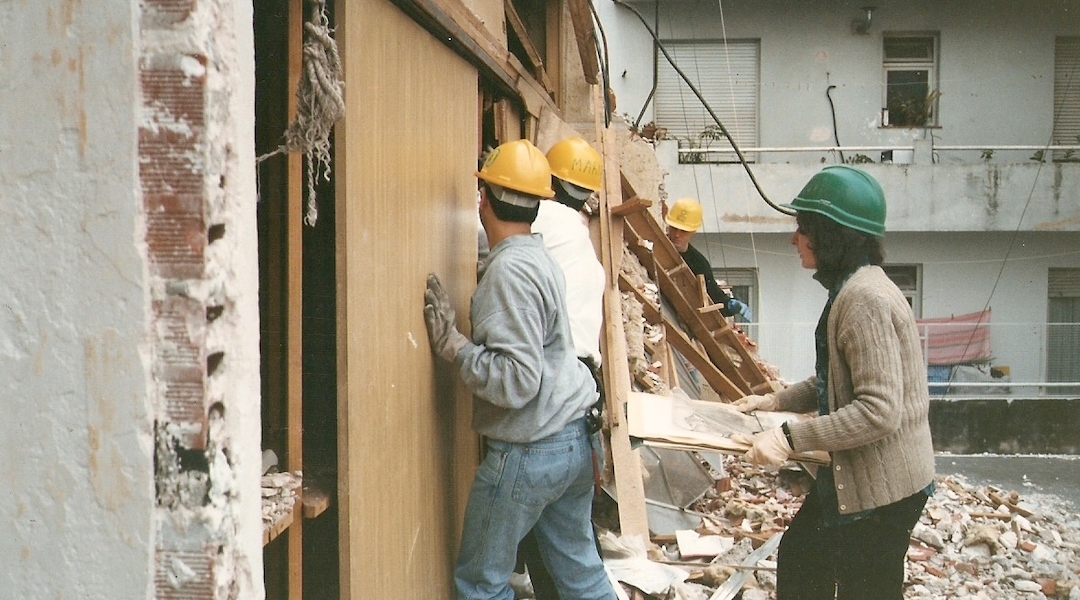 IWO was hosted on the third and fourth floor of the AMIA building and contained thousands of books, paintings, art collections, audio records, letters and Judaica artifacts documenting Jewish life in Argentina and Eastern Europe. (Courtesy of IWO)

“During the first two days of the attack, the first priority was to find survivors,” Diego Goldman, who spent those days on site, told the Jewish Telegraphic Agency.

Back then, Goldman was an 18-year-old high school student at the Rambam Institute, located a couple of blocks from the AMIA. He was on winter holidays that day, and set off on the one-hour trip from his house to the site after hearing of the attack from his screaming mother.

Looking toward the abyss

Two days after the attack, a Wednesday, Szwarc carried a brick-sized cellular phone as she walked to the part of building that was still standing to inspect the archive and report on its condition. The report was favorable and Lichtenbaum and other staff members where anxious to get inside and start the rescue operation, but local authorities were still determining if it was structurally sound.

At approximately 2 a.m. Friday of the same week, Lichtenbaum received the phone call from the authorities getting the permission he craved. Goldman also got a call from Szwarc, who had been his professor at the Rambam Institute, at around that time, telling him that she needed him on site.

They all met before dawn that day, and Goldman was asked to climb from the back of the building and through a window on the third floor to retrieve an important part of the archive. 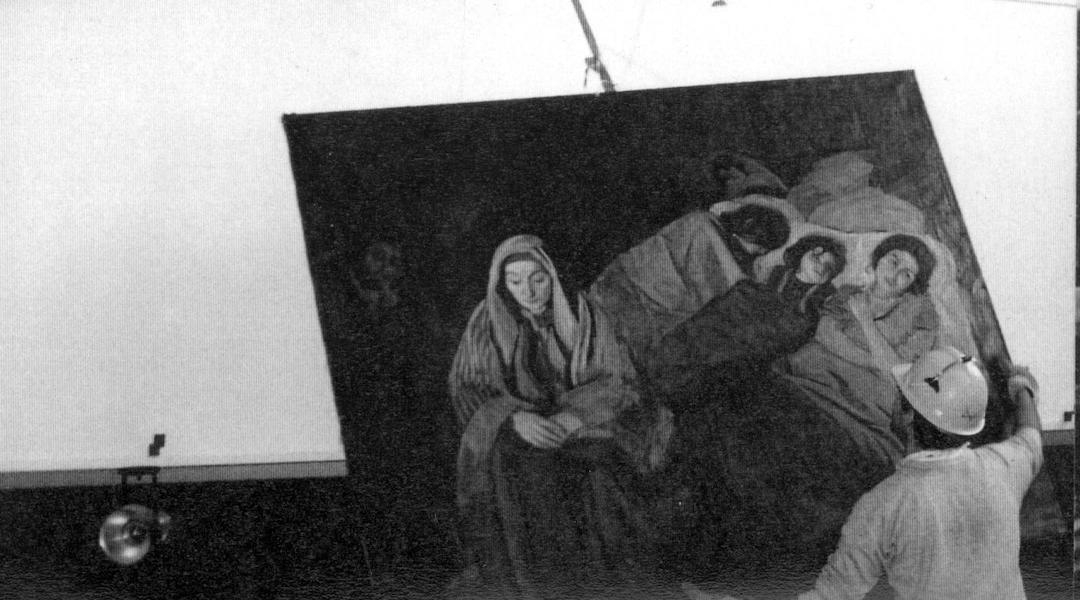 A painting gets lowered out of the AMIA building. (Courtesy of IWO)

“I went in with a flashlight and was scared to death at the idea of finding dead people lying around, even though the authorities had already cleared the space” Goldman told me. “It was eerie to be inside this huge library with a whole wall blown out, looking towards the abyss.”

According to Szwarc, who also went in, the path to reach the archives was covered in debris. But upon a closer look, the pieces of rubble turned out to be books.

“We were shocked. It was unthinkable for us: We needed to step on books to get to the archive. We couldn’t do it,” she told me. “We first had to clear them out.”

During those first 20 hours, the focus was solely on saving the archive.

“Different editions of our books are found all over the world,” Lichtenbaum told me, “but our archive contains unique documents on Jewish life that would’ve been lost forever, and this was our priority.”

A group of 10 to 15 young adults, led by the IWO staff, was in charge of putting these documents into a truck, and then carried them to a warehouse donated by a member of the Jewish community.

Then came the massive library. During the weeks that followed, some 800 volunteers, mostly between the ages of 14 and 25, took turns in an elaborate human chain that brought down the books three and four stories. Wearing gloves and helmets, they passed heavy plastic bags containing books, artworks and other rescued objects to four depositories located nearby.

“These kids carried the bags in the cold and under the rain for hours a day,” said Goldman, who became one of the coordinators. “Some of them even passed out from the effort.”

At the same time, Lichtenbaum documented the whole rescue process — influenced by Simon Dubnow, an Eastern European Jewish historian who allegedly asked people to document the horrors of Nazi terror, even as they were being led to their deaths. The footage was used in a short video documentary called “The Youth that Rescued Memory.”

The books were damaged from the rain and wind, and restoration work began almost immediately.

“We had no idea how to do it” Lichtenbaum said, “and we received help and courses from experts from Argentina’s National Library and Americans who had helped restore damaged archives in Florence.”

In order to get through the whole collection, large tables were set up in an underground space, where dozens of volunteers, wearing masks, used hair dryers and special towels to dry each book, page by page.

What shocked volunteers like Goldman was that some of these books had been rescued before. According to IWO’s current librarian, Ezequiel Semo, they had been part of the Allies’ program to repatriate European Jewish books from the ravages of World War II. 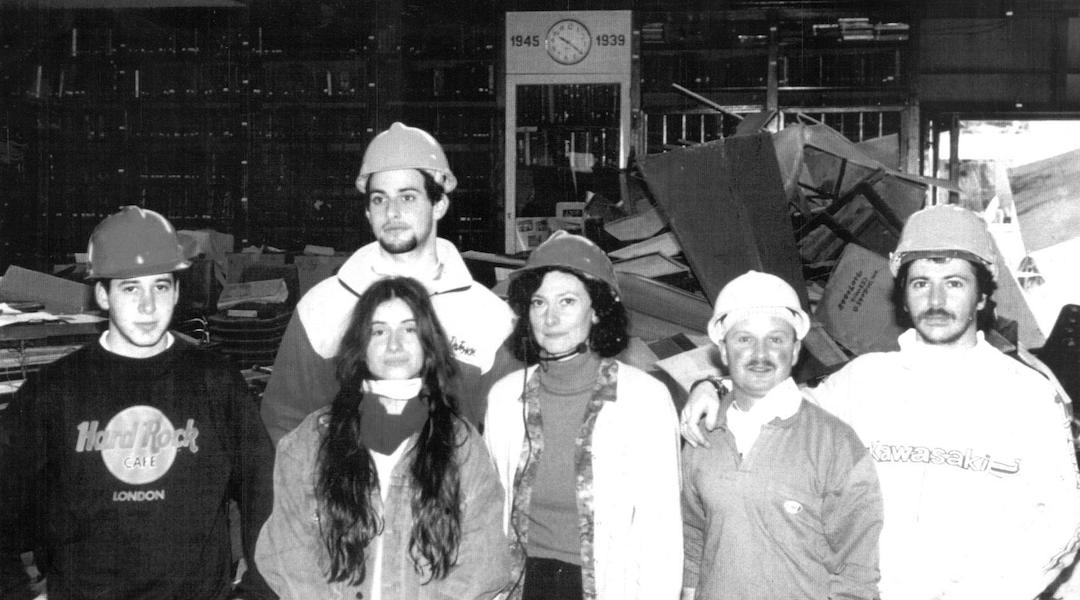 Ester Szwarc, third from right, with young volunteers in the wake of the AMIA bombing. (Courtesy of IWO)

The restoration and re-categorization of the collection took about a year, according to Lichtenbaum, who is still IWO’s director. All in all, 60,000 books, 32,000 newspapers and magazines, 9,000 photographs and documents, 2,100 LPs, 700 movie and film posters, 120 paintings, 38 statues and 17 musical instruments were saved.

“The perception of what it meant to be a Jew changed,” Goldman said. “Ever since the attack, police and bitahon [security] forces have been mobilized next to Jewish institutions and large walls have been erected in front of Jewish buildings to stop any potential car bombs.”

Like the rest of those interviewed, Goldman expressed sadness about what he considered to be the politicization and banalization of the attack. International and local authorities have long been confident that Iran, through its terrorist proxy Hezbollah, masterminded the attack. But over the decades the investigation stalled or was mismanaged by Argentine governments and law enforcement, sometimes to appease Tehran, sometimes out of indifference. Arrest warrants for various Iranian officials have never been carried out.

“It’s frustrating to think that, like with many crimes in Argentina, justice in this case will not be carried out,” Goldman said.

Lichtenbaum said that with each passing year, the indifference grows.

“Those under 25 know practically nothing [about the attack],” he said. “This is why the IWO has a special educational project in which we visit elementary, middle and high schools throughout Argentina to talk about what happened.”

Participants in a memorial ceremony on the 22nd anniversary of the AMIA Jewish center bombing in Buenos Aires hold photos of some of the 85 victims, July 18, 2016. (Leonardo Kremenchuzky courtesy of AMIA)

According to Lichtenbaum, all of the Jewish infrastructure has been restored, except for IWO, which is still in a temporary building.

Today the collection, which has found a home in the offices where it moved after the attack, is now a little bit bigger. There are boxes with remnants of the AMIA (like a letter “A” picked up from the rubble) and destroyed Yiddish typewriters, which Semo says still have pieces of concrete sand dust stuck to them.

As for the books rescued from the Shoah, they are now aptly called by IWO’s staff the “Double Rescued.”

Reflecting on the experience, Szwarc says those who put in so much effort on the project didn’t do it all just for themselves.

“There’s a Yiddish concept called the ‘Di Goldene Keite,’ which talks about the historical link that ties each generation to the next,” she said. “We are responsible for transmitting and preserving this heritage. We are the people of memory, after all.”