Why did Kellyanne Conway ask a Jewish reporter about his ethnicity? 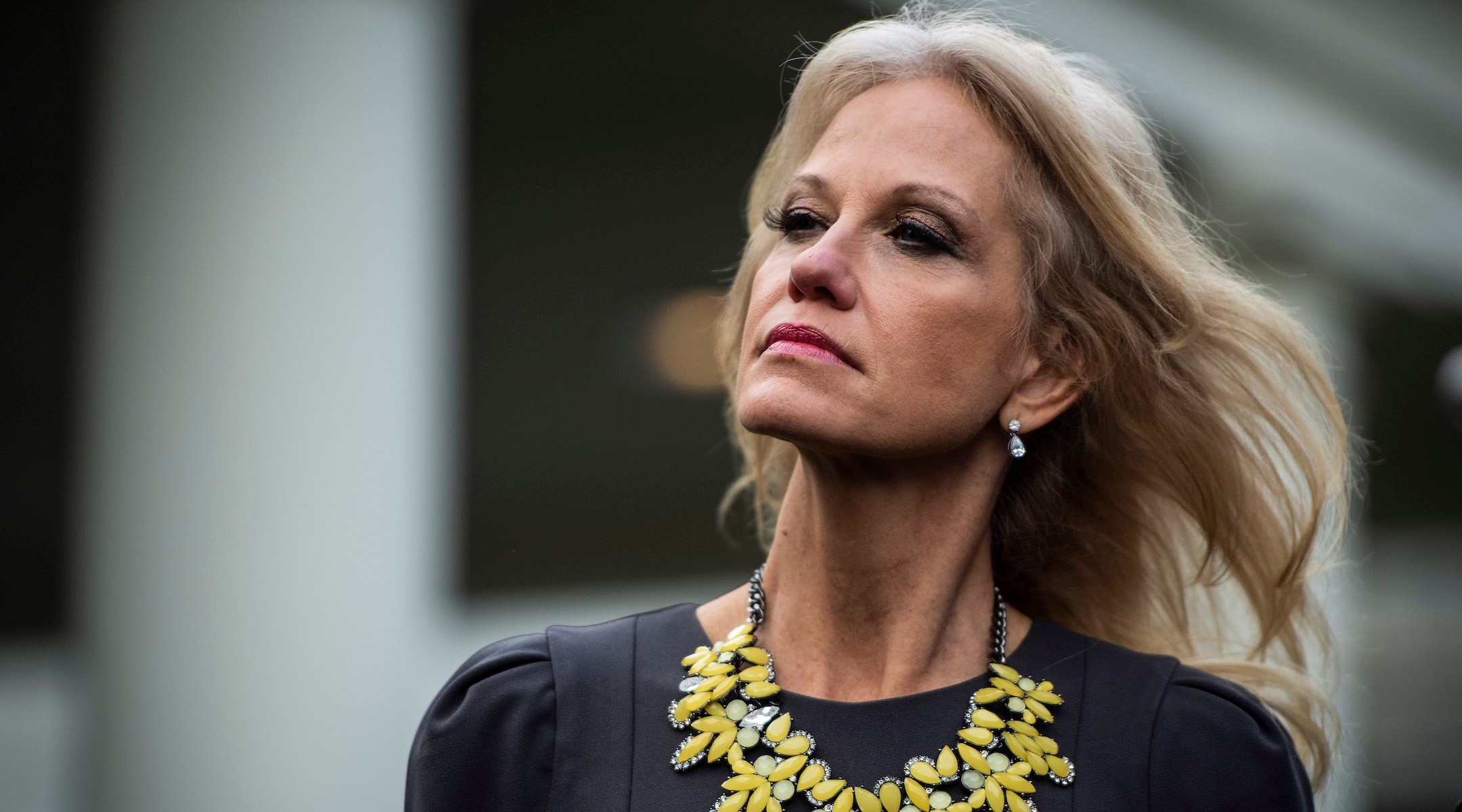 (JTA) — What was Kellyanne Conway trying to say when she asked a Jewish reporter, “What’s your ethnicity?”

During a press gaggle Tuesday at the White House, Breakfast Media correspondent Andrew Feinberg asked the White House counselor a question about President Donald Trump’s tweet condemning four Democratic congresswoman for “loudly and viciously telling the people of the United States, the greatest and most powerful Nation on earth, how our government is to be run.” In the same tweet, Trump suggested the lawmakers, all woman of color, should “go back” to the “places from which they came.”

Feinberg asked Conway which countries she thought the president had in mind.

Replied Kelly: “What’s your ethnicity?” When Feinberg responded “Um, why is that relevant?” she continued, “No, no, because I’m asking you a question. My ancestors are from Ireland and Italy.”

Feinberg later said he hadn’t a clue why Conway asked the question.

So what did she mean?

Twitter liberals played this as Conway trying to “other” a Jewish reporter, or at least insinuating that perhaps Feinberg had an ethnic affinity for “The Squad,” as the four freshman lawmakers have come to be known.

CNN’s Chris Cillizza wrote: “It feels as though Conway is asking for proof of some sort of lineage before she is willing to answer the question from Feinberg.”

Feinberg, for the record, didn’t see it that way. Although he felt the question was “bizarre,” he tweeted, “No, I don’t think she was being anti-Semitic.” (Trump, meanwhile, has been defending his own remarks by saying all four of the congresswomen are anti-Israel and anti-Semitic.)

In a sorry-not sorry follow-up tweet, Conway tries to explain: “This was meant with no disrespect,” she said of her question to Feinberg. “We are all from somewhere else ‘originally.’ I asked the question to answer the question and volunteered my own ethnicity: Italian and Irish. Like many, I am proud of my ethnicity, love the USA & grateful to God to be an American.”

This was meant with no disrespect.

We are all from somewhere else “originally”. I asked the question to answer the question and volunteered my own ethnicity: Italian and Irish.

Like many, I am proud of my ethnicity, love the USA & grateful to God to be an American 🇺🇸 https://t.co/OvBALIO6WP

Conway no doubt was prepared to defend Trump from what had become the widespread critique of his remarks: that they were racist, and/or a signal to nativist followers that — as Charles Blow interpreted them in a New York Times essay condemning Trump — this is “a white country, founded and built by white men, and destined to be maintained as a white country.” Or as Rep. Will Hurd of Texas, the sole black Republican House member, told CNN: “I think those tweets are racist, and xenophobic. They’re also inaccurate. The four women he’s referring to are actually citizens of the United States. Three of the four were born here.”

(Rep. Ilhan Omar, a refugee from Somalia, is the only one of the four who is not native born: Rep. Rashida Tlaib is Palestinian-American; Rep. Alexandria-Cortez’s father was born in Puerto Rico; Rep. Ayanna Pressley is African-American.)

By acknowledging Americans are “all from somewhere else ‘originally,’” Conway seems to suggest that the president didn’t care which countries the women come from. It was their criticism of America that stung.

In a quick pivot from her exchange with Feinberg, Conway went on to say of Trump, “He’s tired, a lot of us are sick and tired of this country — of America — coming last to people who swore an oath of office.”

The president doesn’t see ethnicity, in other words. He just sees a lack of patriotism. All four women have been critical of Trump administration policy on immigration, national security, the environment and social welfare. He would have directed his remarks at any lawmakers who, in his words, “loudly and viciously” attacked the government.

“The point Conway seemed to be trying to make was that Trump, who does not have a racist bone in his body, might have told any Democratic critic to ‘go back’ to the ‘crime infested places from which they came,'” she wrote. “The fact that none of the four women he targeted are white, and that two of them are Muslim, had nothing to do with it!”

If that was what Conway was trying to say, she’s likely to get some pushback at home. In an essay for The Washington Post, her husband, George, a frequent critic of Trump, expressed his own opinion about the president’s remarks.

“Telling four non-white members of Congress — American citizens all, three natural-born — to ‘go back’ to the ‘countries’ they ‘originally came from’? That’s racist to the core,” George Conway wrote. “It doesn’t matter what these representatives are for or against — and there’s plenty to criticize them for — it’s beyond the bounds of human decency. For anyone, not least a president.”