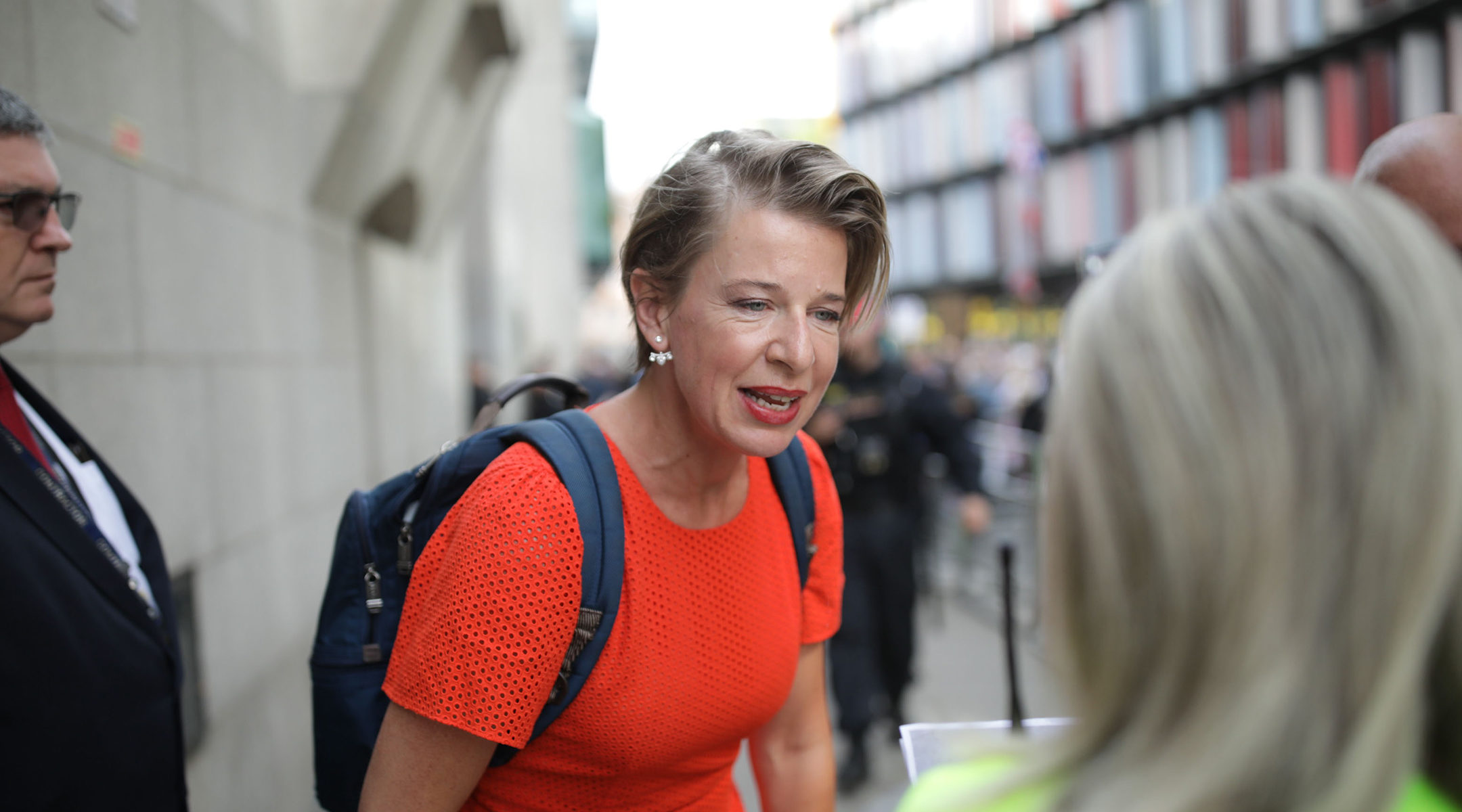 (JTA) — To her critics, British journalist Katie Hopkins is less an anti-immigrant activist than a flat-out Islamophobe, demonizing Islam in defense of what she calls “White Brits.”

Such views have earned her scathing criticism and rejection by leaders of British Jewry.

But on the ground in the United Kingdom, Hopkins’ engagement with parts of the Jewish community and other minorities, as well as her growing focus and action on Israel, have earned her numerous Jewish supporters.

In an article Saturday, The New York Times noted that President Donald Trump, already under fire for a tweet targeting, among others, two Muslim-American lawmakers, retweeted an endorsement of him by Hopkins. The Times characterized Hopkins as “a right-wing British commentator who has drawn repeated condemnation over a long history of anti-Muslim remarks and for casting blame on a Jewish leader for provoking a synagogue shooting.”

Indeed, Hopkins suggested last year on Twitter that British Chief Rabbi Ephraim Mirvis’ favorable views on immigration were somehow connected to the slaying last year of 11 worshippers at the Tree of Life synagogue in Pittsburgh. The Pittsburgh shooter had written that he was enraged by the pro-immigration policies of a Jewish group and others.

Don’t blame Trump, Hopkins wrote. Rather, “Look to the Chief Rabbi and his support for mass migration across the Med[iterranean],” she wrote. “There you will find your truths.”

The Times also wrote about her many criticisms of Islam and use of the term “final solution” to describe what needs to happen in Manchester — presumably, to Muslims — following a terrorist attack there in 2017.

But Hopkins, 44, also represents the meeting place of far-right European nationalism and pro-Israel sentiment. In fact, she has been criticized by some on the far right for allegedly embracing Israel. Meanwhile, some on the left say she’s done this to whitewash her own anti-Muslim racism and even anti-Semitism.

“It feel like it’s [Israel is] kind of my natural home,” Hopkins said in Tel Aviv last year to an audience that had gathered for a screening of her documentary film “Homelands” about the flight of Christians and Jews from Europe. Hopkins, who has 969,000 followers on Twitter, then said, “It’s my ambition to be Jewish.”

She recalled telling an Israeli cab driver who asked whether she was Jewish.

Hopkins, a former branding professional for the British meteorological service, gained fame in 2007 with her appearance on the British edition of “The Apprentice” reality television show. She also said in the Tel Aviv speech: “All of my friends are Jewish, I hope I’ll get through osmosis if I rub up against them enough.”

Such comments did not go unnoticed among neo-Nazis who otherwise relish her calling immigrants arriving on boats “cockroaches” that should be stopped by “gunboats,” or her journalistic focus on “White Brits” who are “becoming a minority” in neighborhoods and towns that are becoming predominantly Muslim, as she explains in “Homelands.”

“Alas but she loves Jews if I recall,” one user of the neo-Nazi website Stormfront wrote last year.

Another user wrote: “She’s what most people here would call ‘alt-lite.’ She’s part of the Jew Ezra Levant’s Rebel Media now.” It was a reference to the Canadian media website to which she used to contribute.

Hopkins began writing there following her dismissal from LBC Radio over the “final solution” tweet. (Amid an outcry, she deleted the tweet and said she ought to have written ‘true solution’ not to be ‘disrespectful to the survivors in Manchester.’”)

Hopkins, who declined to be interviewed for this article, also deleted her tweet about the synagogue shooting.

Following the Chief Rabbi tweet, she quickly deleted the quote and offered something resembling an apology – an action that Hopkins, a mother of three, has said she does not believe in.

“I have never apologized for anything I’ve said,” Hopkins said in 2015. “I find it very disappointing when people apologize. You should have the positive moral attitude to stand by what you say.”

Jonathan Hoffman, a former vice president of Britain’s Zionist Federation, traces Hopkins’ growing interest in Israel and Jews partly to her viewing European Jews as canaries in the coal mine – the first targets of Muslim hardliners she fears will eventually target other groups in their adoptive countries.

“I think she genuinely sees the fact that with Israel, Jews have somewhere to run to,” Hoffman told JTA.

He added: “I think it’s a conspiracy theory, this idea that she’s using Israel or the Jewish community as some kind of prop to support her anti-Muslim behavior. I don’t buy that. I don’t think she’s that clever, actually.”

But Hoffman does not believe that it would be appropriate for any Jewish group to host Hopkins as a speaker because “she’s crossed the line into racism” in her rhetoric about White Brits vs. Muslims.

“I don’t hear anyone from the Jewish community speaking like that, not even on the right fringes,” he said. (Hopkins attended a Zionist Federation fundraiser in London last year as another guest’s plus one. The federation apologized for hosting her, explaining it did not plan to.)

The Board of Deputies of British Jews has been one of Hopkins’ most outspoken critics and has decried the support shown to her by some British Jews.

After the right-leaning Jewish group Campaign 4 Truth hosted Hopkins for a screening earlier this month of “Homelands,” the board’s president, Marie van der Zyl, tweeted: “This vile Muslim-baiting film should never have seen the light of day. Shame on those who hosted and promoted such an event.”

The film transitions between non-Jewish Europeans’ fear about Islam to the decisions by Jews who left France amid anti-Semitic violence that watchdog groups say is fueled almost entirely by Muslim extremists.

Hopkins was scheduled to screen the film this year in Israel, but the event was canceled after the municipality of Raanana pulled the plug.

Though he disagrees with the premise and terminology of Hopkins’ film, Hoffman says he can see its internal logic, which he argues is also the reason that Hopkins has recently focused on Israel in her documentary and beyond.

“If you believe in the idea that Europe is doomed, which I don’t think I do, then it’s a reasonable point to make: Jews have somewhere to run to, non-Jews don’t,” Hoffman said.