Want to help immigrants? Don’t go to the border. 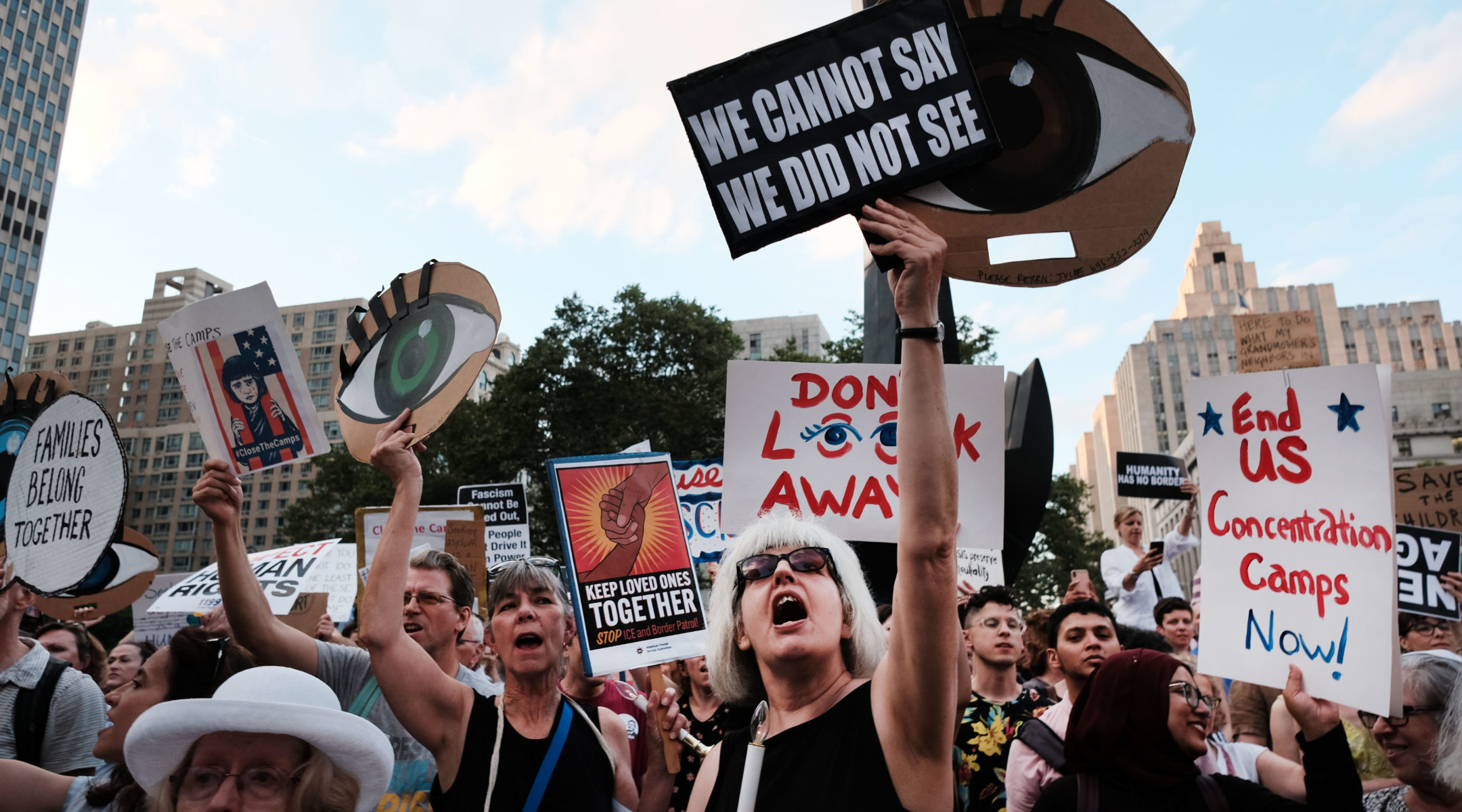 Hundreds gather in New York City for a "Lights for Liberty" protest against migrant detention camps and the impending raids by Immigration and Customs Enforcement in various cities, July 12, 2019. (Spencer Platt/Getty Images)
Advertisement

NEW YORK (JTA) – Over the past few weeks, I’ve been getting inquiries from Jewish communities all over the country about taking a trip to the U.S. border with Mexico.

T’ruah, the organization where I work, has been one of the leading Jewish groups speaking out against the inhumane conditions for migrants. Together with the Jewish refugee organization HIAS, we have brought two delegations of rabbis and cantors to the border to bear witness and stand in solidarity with asylum seekers.

So you might be surprised to hear that I’ve been telling those thinking of making a trip of their own to reconsider.

What I hear in the recent surge of calls and emails is that Jewish congregations and institutions want to see for themselves what is happening and to galvanize their communities to take concrete action.

I appreciate the intentions behind these desires. Immigration policy over the past few decades has been wholly inadequate to address the global refugee crisis and provide for the 11 million undocumented immigrants here – and the Trump administration has accelerated and intensified the weaponization of federal agencies against those who come here seeking refuge.

Many of us in the Jewish community have reached a breaking point. Concentration camps, law enforcement deployed to round up targeted groups, families separated and caged, and children dying in state custody all have painful historical resonances.

I applaud the desire to do something. But that something doesn’t always need to be going to Texas, or New Mexico, or Arizona or California. 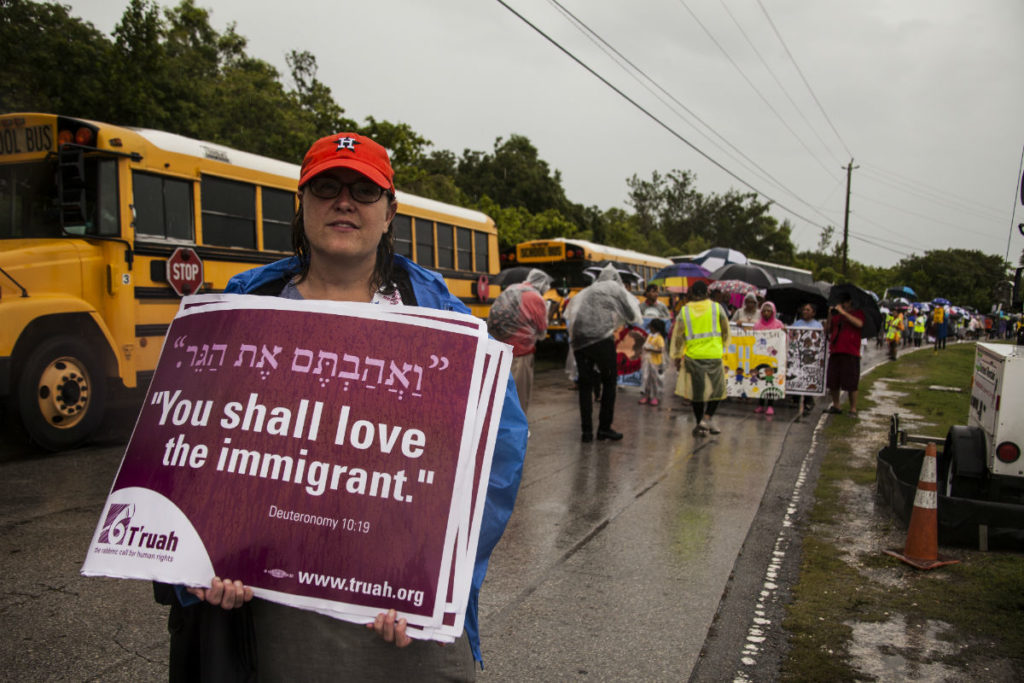 Rabbi Salem Pearce at an interfaith vigil outside the Homestead Detention Center in South Florida, where more than 2,000 child migrants are being held, June 16, 2019. (Maria Alejandra Cardona for T’ruah)

While T’ruah has taken delegations to the southern border in conjunction with local, immigrant-led organizations, we’ve worked hard to make these visits about amplifying the work of these local organizations and not disrupting their efforts or requiring them to host or accommodate us.

T’ruah also spearheads a network of more than 70 synagogues committed to supporting migrants, whether by offering protected sanctuary space, legal assistance, accompanying people to Immigration and Customs Enforcement check-ins or various other actions.

For years, if not decades, the organizations at the border have been providing services for people crossing the border, fighting bad laws and building power for marginalized communities. To them this is decidedly not a new problem. Many of them are also stretched to the breaking point to accommodate worsening conditions. Border tourism only adds to the pressure.

Plus, what is happening on the southern border isn’t just happening at the border: It’s happening all over the country. ICE operates in all of our communities. Detention centers are spread throughout the country. Families are being separated just a few miles from where I sit in Manhattan. Even closer, and every day, immigrants are being hunted down by ICE.

We do not all need to go to the border in order to have a major impact on protecting immigrants and refugees. We can engage in action right here in our own communities.

Here are just a few things you can do:

Go to the nearby events that are planned by or in conjunction with immigrant-led organizations.

In just a few weeks, on the Jewish holiday of Tisha b’Av, a day of mourning, communities all over the country will be holding special vigils outside ICE facilities. Help organize one or participate in one that’s already being organized.

If you see ICE agents where you live, and you are a citizen and thus do not need to worry about being deported, confront the agents (nonviolently, of course) to make it more difficult for them to do their job. Ask them to show their judicial warrant and remind them that even if they have a warrant allowing them to detain someone, it does not allow them to forcibly remove someone from their home or vehicle. Remind them that they should not detain any minors.

Donate the money you would have spent on a synagogue trip to the border to organizations directly serving impacted communities. Make a monthly donation to several of these organizations — and get 10 of your friends to do so, too.

If you do decide to go to the border, take a few weeks off from work and volunteer there doing whatever you’re asked to do. Immigration lawyers are particularly needed.

Wean yourself from companies that fuel the crisis.

Amazon provides ICE with the technology to collect, store and manage the vast amount of data it uses to surveil and deport immigrants. Pressure businesses like Core Civic, Xerox, Comcast, Deloitte and many, many more that profit from and enable the immigration-industrial complex.

As a community, study and discuss Mijente’s “Free Our Future: An Immigration Policy Platform for Beyond the Trump Era.” Many of the protests happening recently have featured calls to defund and/or abolish ICE. This document explains why and makes the case for reimagining our broken immigration system. Also, there are a variety of study and discussion resources in T’ruah’s “Mikdash: A Jewish Guide to the New Sanctuary Movement.”

Have your synagogue become a sanctuary space as part of T’ruah’s Mikdash network. Build relationships with your local interfaith or immigrant-led organization doing this work. Call your members of Congress as often as you can. Request meetings while your representatives are home in their districts next month.

How we are treating immigrants who have just arrived and those who have been here for 50 years, and everyone in between, is morally abominable. And that treatment is likely to continue for some time. There are many, many things to do right now – and most are best accomplished from right where you are.