What The New York Times got right and wrong about BDS: An exchange 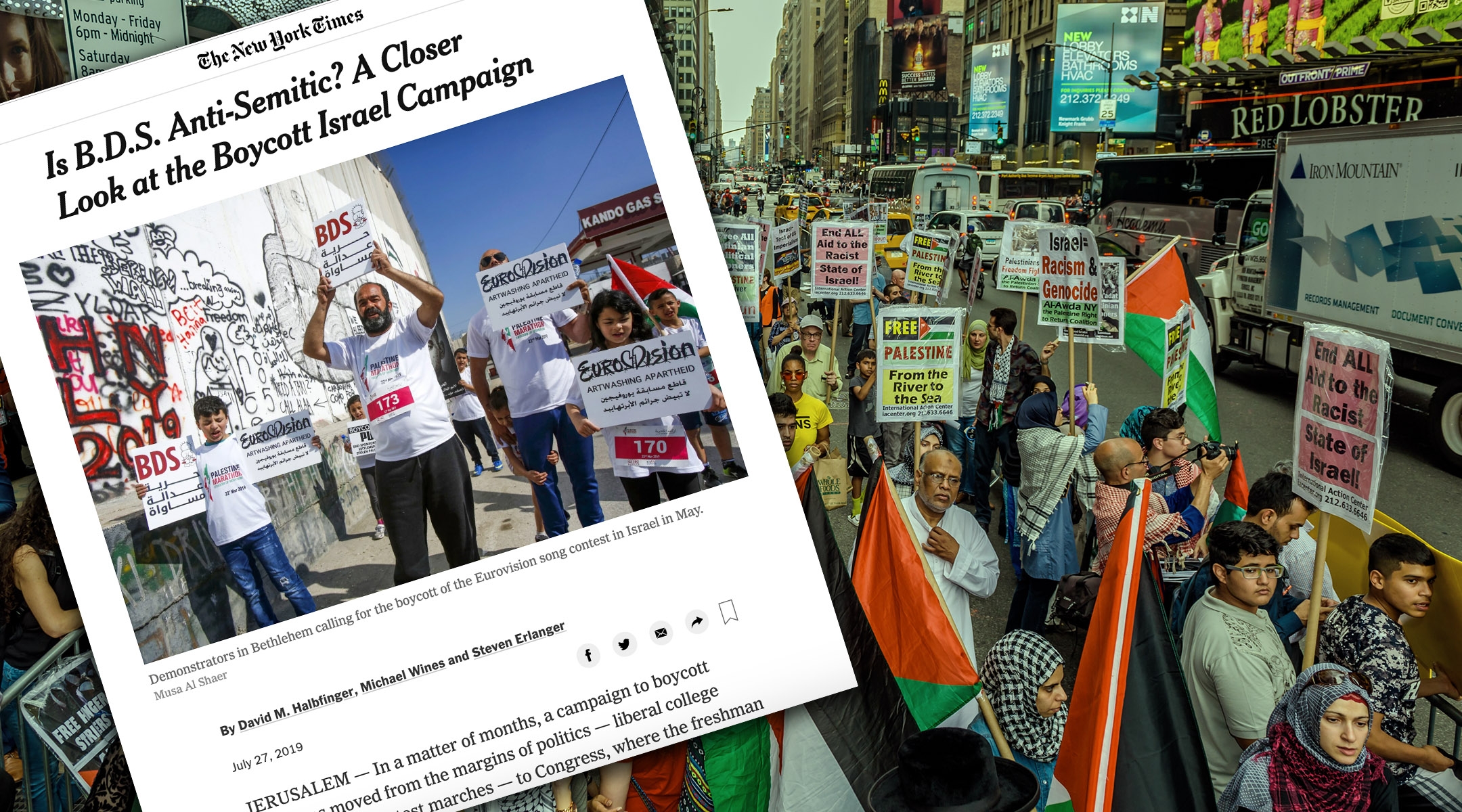 A New York Times explainer of the movement to boycott, divest from, and sanction Israel; a gathering on the International Day of Quds in Times Square, NYC. (Erik McGregor/Pacific Press/LightRocket via Getty Images)
Advertisement

NEW YORK (JTA) – The Jewish Telegraphic Agency’s editor in chief, Andrew Silow-Carroll, and its opinion editor, Laura E. Adkins, shared their thoughts on a recent New York Times article answering “some of the most difficult questions” about BDS, or the Boycott, Divestment and Sanctions movement against Israel.

Andrew Silow-Carroll: Hey Laura, I wonder what you thought about The New York Times explainer on BDS. The Times usually hears it from both sides when they set out to provide what they consider a balanced view of a controversial aspect of the Israeli-Palestinian conflict (and what aspect isn’t controversial?). But I thought in this case they did a pretty good job, particularly in making it clear why the pro-Israel opposition to BDS is not confined to the right.

I thought the authors (three!) did an especially good job in explaining that BDS — the actual movement, under the umbrella of the Palestinian BDS National Committee — is not a “peace” movement in the sense that they want a just outcome for Israel and the Palestinians. We know that the Israeli left, to the degree that it still exists, shares its goal of ending Israel’s occupation of the West Bank. But The Times noted how BDS goes much further, especially in seeking, as the article explains, “a right of return to the Palestinians classified as refugees — the original refugees and their millions of descendants.” The Times notes how opponents reasonably predict that such an influx “would spell the end of a Jewish majority.”

And beyond their actual program, the article notes how the BDS leadership rejects the very idea of a Jewish state — or at least where it sits now. When asked if Jews can have their own state, Omar Barghouti, one of the movement’s founders, replies, “Not in Palestine.”

By “Palestine,” Barghouti means all of Israel, not just the West Bank. The Times reminded readers that this isn’t a group merely seeking civil rights and independence, but the dissolution of Israel as we know it.

Laura E. Adkins: I agree with all of your conclusions if we let the evidence cited by The Times stand on its own. But an explainer needs to properly contextualize the discussion topic for readers as well, and that’s where I feel The Times missed the mark.

My biggest beef with the explainer is that their framing softens the BDS movement’s aims, and glosses over the fundamental reason why most supporters of Israel object so vigorously to it: BDS has never been about the 1967 occupation of the West Bank – it’s always been about Israel’s creation in 1948.

The Times explainer claims that BDS’s first fundamental demand is “ending its occupation of all land captured in 1967,” and adds that “many who embrace BDS see it aimed primarily at ending Israel’s occupation of the West Bank.”

But The Times is softening the language used on the BDS movement’s official website, which calls not for an end to the occupation of land captured in 1967, but for an end to the “occupation and colonization of all Arab lands,” which certainly includes Tel Aviv and Jaffa as much as it does Ramallah and Bethlehem.

The movement’s site further asserts that “For nearly seventy years, Israel has denied Palestinians their fundamental rights and has refused to comply with international law. Israel maintains a regime of settler colonialism, apartheid and occupation over the Palestinian people.” The only logical conclusion of this statement – and of the actions of BDS supporters – is that the movement calls not for a retreat to the 1967 borders, but for the destruction of the modern state of Israel. It is not just “many Israelis,” as The Times asserts, who see things this way.

I reject the idea that anti-Zionism is fundamentally anti-Semitic. But to truly understand the BDS movement, it’s not enough for The Times to parrot the line that, while BDS is certainly anti-Zionist, “BDS does not advocate for any specific outcome.”

In 2019, being actively anti-Zionist means the group is not calling merely for a shrinking of Israel, nor for further integration of Arab Israelis into Israeli society, which a casual reader of this explainer certainly could miss.

ASC: That’s a good deep read. I wonder what the average reader, who is not as immersed in these issues as we are, would take away from the article, if they made it all the way to the bottom. Because once they get there, they find out that BDS has not been all that effective, and that one reason it has any oxygen at all is the way Israel itself is exaggerating the threat of BDS. Doing so, claims The Times, “adds to the sense that Israel is besieged and that the Palestinians are not really interested in peacemaking, bolstering right-wing arguments for continued expansion of Jewish settlements in the West Bank.”

I might have added that BDS supporters also exaggerate their success, and the media often buy in.

LEA: It’s a great point. Dany Bahar and Natan Sachs, writing for the Brookings Institute, demonstrated in 2018 that Israel’s economy is advanced enough that the economic impact of BDS is virtually nil. However, that doesn’t stop the Israeli government from investing hundreds of millions in raising the alarm about its very real impact on how Israel is perceived in the amorphous “international community.”

Pro-Israel advocates often point out that vastly disproportionate attention is paid to calling out Israeli human rights abuses at the United Nations. While this may smack of “whataboutism,” I can’t help but think that some of this extra focus on the Israeli-Palestinian conflict is due to the BDS movement’s popularity among the activist class.

Of course, you’re right that proponents of annexation, or even those uninterested in aggressively ending Israel’s control over the West Bank and Gaza, also benefit politically from making the specter of BDS loom much larger in our minds.

ASC: I also think The Times overstated the popularity of BDS in the Jewish community, saying “it appeals to those, including a significant number of politically liberal Jews, who are frustrated by the Israeli occupation of the West Bank, and the blockade and frequent bloodshed in Gaza.” The frustration is real, but I’d love to see how they define “significant.” Yes, most liberal American Jews want to see a revived peace process and sometimes are embarrassed by what looks like disproportionate responses to Hamas aggression (or, should I say, fierce military responses in the absence of diplomatic will). And BDS might have appeal among a vocal fringe of the Jewish left, especially as you look at younger cohorts. But I suspect that most liberal Jews here want to work within an Israeli consensus of what is and isn’t acceptable, and BDS, for a truly significant number of Israelis and American Jews, is beyond the pale.

Eric Alterman states the liberal Zionist case in a separate op-ed in The Times describing how both the proponents and opponents of BDS exaggerate its impact for their own purposes. He writes: “As a liberal Jew who agonizes over what this endless occupation is doing — not only to the Palestinians but also the Jews, both here and in Israel — I wish I could find a movement that actually sought to help Israel realize the folly of the self-destructive path it is currently on and simultaneously advance the cause of a peaceful state for the Palestinians.”

Am I wrong? Is BDS making more inroads among Jews under, say 30, than I realize?

A major Jewish donor frustrated with the lack of young Jews involved in anti-occupation, pro-Israel work once put it this way to me: The vast majority of American Jews are pro-Israel. But among Jews who are involved in activism centered around the Israeli-Palestinian conflict, anti-Israel activists are overrepresented.

I wouldn’t say that BDS is making any major inroads among American Jews who are actively involved in Jewish communal life, organizations like the Workmen’s Circle and others aligned with the socialist movement and radical politics aside. But as we know, Jewish communal institutions and synagogues are having trouble attracting millennials and Gen Y Jews into the pews and to open their pocketbooks at all, so in 2019, that’s probably not the place to look to best gauge BDS’s appeal among Jews.

Here’s what we do know: Polling data consistently tell us that most Americans do not know what the BDS movement even is. Although those who do and support it are overrepresented among younger and more highly educated cohorts, the reality remains that most Americans of all ages and backgrounds do not support the movement. Boycotting Israel is simply not an important issue for most Americans, even the young “woke” Jewish ones.