Not The Squad: Rep. Elissa Slotkin and her ‘Gang of 9’ offer Democrats a path of moderation 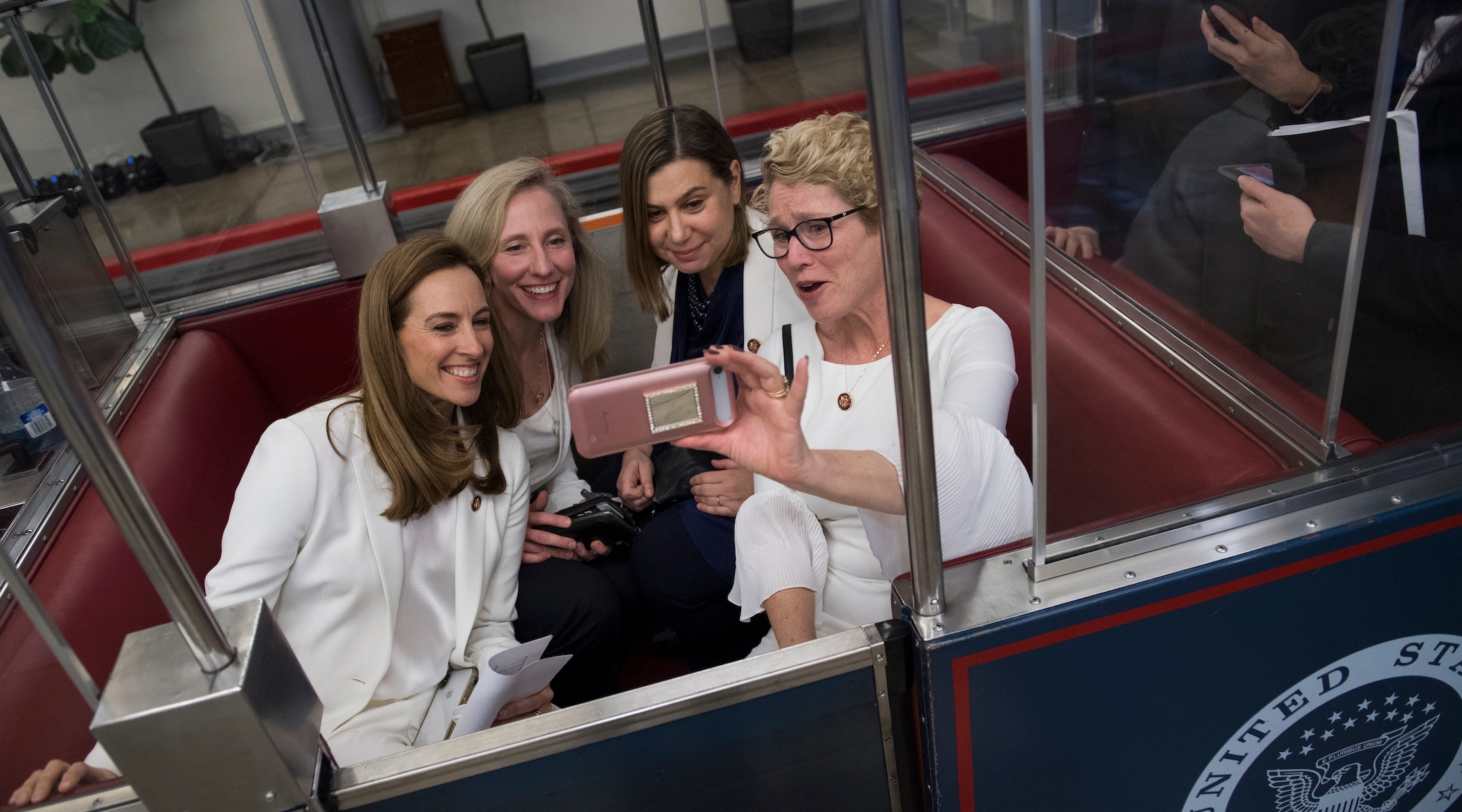 LANSING, Michigan (JTA) — Tom Dalton could be the poster boy for Elissa Slotkin’s path to a second term and, she would argue, to Democrats keeping the U.S. House of Representatives.

The 67-year-old Vietnam navy vet routinely votes Republican — but says he would not hesitate to vote for Slotkin, a Democrat, if he had the opportunity.

“Seeing what’s happening today in the news, all you hear is negative this and negative that, I would love to know if there’s a lot more of what I saw today,” he said, after Slotkin and the Republican in the neighboring district, Tim Walberg, thanked him for his military service at a Veterans of Foreign Wars hall in this central Michigan town split between their districts.

“I want to thank you for being a Republican and a Democrat,” Dalton said, emphasizing the “you” after the duo gifted him with a ceremonial pin.

In an interview two days later, Slotkin told the Jewish Telegraphic Agency that she sees bipartisanship as key to any success in Michigan, which flipped to Trump in 2016 by a tiny margin. She was one of two Democrats to pick up seats in the state last year, ousting the Republican incumbent in an upset.

“In my district, I have a very clear mandate to work across the aisle,” she said. “It’s why I was sent to Washington.”

“My father was a Republican and my mother was a Democrat,” she said. “In Michigan, we always fought about sports, not politics. The vitriol from Washington has been imported in our swing state and people can’t stand it. You saw how happy people are when people work together.”

Slotkin, a former CIA analyst, is one of nine veterans of the national security apparatus who are freshman Democrats in Congress and who call themselves the “Gang of Nine.” Three of them are Jewish: Slotkin, Elaine Luria of Virginia, a Navy veteran, and Max Rose of Staten Island, an Army veteran.

The “Gang of Nine” contrast sharply with another clique in the freshman Democratic class, “The Squad” of four progressive congresswomen who include Rep. Ilhan Omar of Minnesota and Rashida Tlaib of Michigan. Although they wouldn’t describe themselves this way, you might call them the “Anti-Squad,” freshmen whose security backgrounds and moderation form an alternative to the progressives who have become symbols of divides within the Democratic Party (and between the parties). 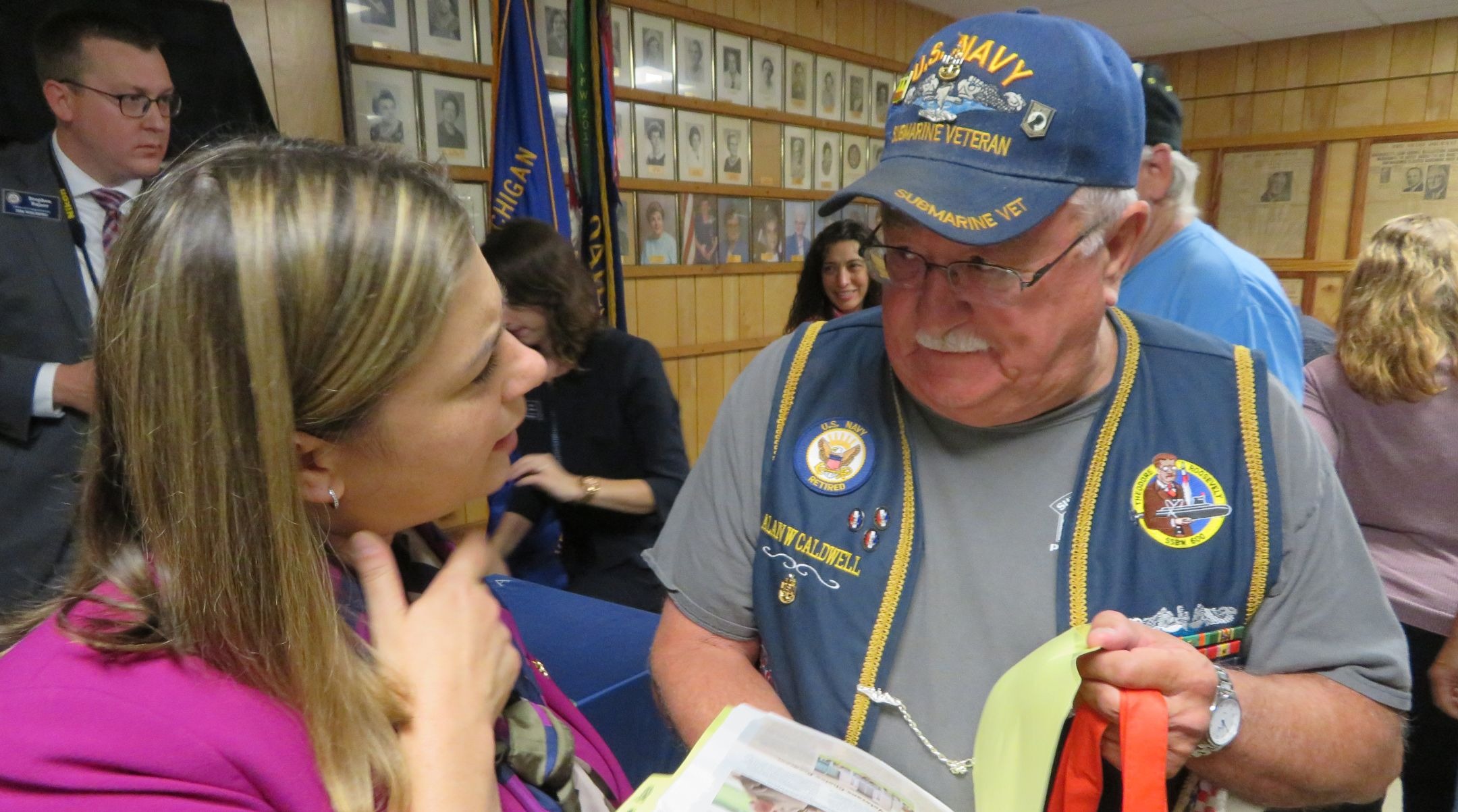 Slotkin speaks to Alan Caldwell at a Veterans of Foreign Wars post in Lansing, Mich., July 30, 2019. (Ron Kampeas)Slotkin said both her national security past and her Jewishness informed her emphasis on bipartisanship.

In Congress, Slotkin has built ties with Midwestern Republicans by advancing Great Lakes region environmental improvement bills and has taken a lead in championing typically Democratic issues, among them preventing foreign influence in U.S. elections and protecting migrants at the southern border.

She is already well known in her caucus for her attention to detail, in evidence at the VFW event, billed as a Veterans Resource Fair. Slotkin listened intently to Martha Williams, who says her husband, who died last month, was never adequately compensated for the sufferings he endured from Agent Orange, an herbicide U.S. troops used in Vietnam. She instructed Williams on how to fill in a request form. Asked if Slotkin was attentive, Williams smiles and nods vigorously.

A few moments later, Slotkin tells the crowd that she has a special pin for the spouses of Vietnam veterans and hands it to Williams, who tears up.

Another veteran, Alan Caldwell, pulled out a folder with clippings about H.R. 303, a bill that would ensure that veterans get disability benefits as well as retirement pay, initiated by Florida Republican Gus Bilirakis. Slotkin asked for the clipping to remind herself to become a co-sponsor. Caldwell was pleased.

“She done good!” he told a Slotkin aide.

Slotkin’s commitment to reaching across the aisle extended to defending Jews from what she called a “precipitous rise” in anti-Semitism, she said in the JTA interview.

“When we have a four-fold increase in violent anti-Semitic attacks, people being killed in Poway and Pittsburgh, when cemeteries are being abused and there are increasing threats to institutions, it’s important we come together in a bipartisan way and are concerned about each and every incident of anti-Semitism, of white supremacy,” Slotkin said. “Where people are trying to split Americans from each other I want there desperately to be bipartisanship.”

In remarks recorded last weekend at a Detroit area fund-raiser for Jewish Democrats, Slotkin appeared to skewer Republicans for talking about anti-Semitism only to court Jewish support. Although the full context of her remarks are not clear from the reporting by the Washington Free Beacon, a GOP mouthpiece, Republicans pounced. 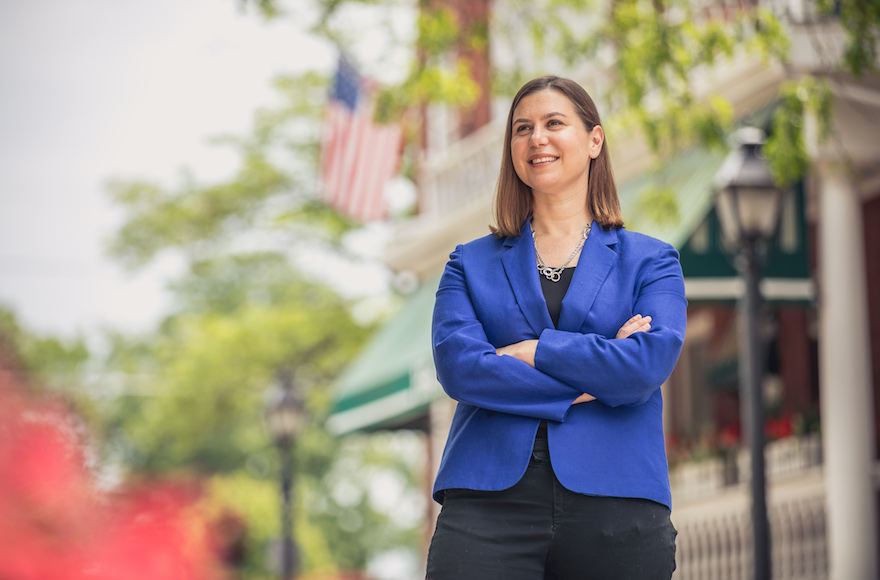 Although it is clear that she has not finished her sentence, the recording cuts off there.

“Congresswoman Slotkin should refrain from denigrating her fellow Jews by saying that they are only wanted for their money,” the Republican Jewish Coalition said.

Slotkin said the remarks were part of a broader critique of attempts by Trump and the Republican party to depict Democrats as the sole purveyors of anti-Semitism. Trump, for example, has repeatedly called the party anti-Semitic and anti-Israel because of pronouncements, criticized by lawmakers on both sides of the aisle, made by Omar and Tlaib.

“We need to be hyper-vigilant to focus on anyone who is anti-Semitic, and we can’t pick and choose, and we shouldn’t let the Jewish community be used as a pawn in the discussion,” Slotkin said.

“She is correct that Republican attempts to use anti-Semitism and Israel as political wedge issues will fail at attracting Jewish voters,” Soifer said.

Slotkin, meanwhile, was among the Democrats who called on Omar to apologize for a tweet suggesting Jewish money in the form of campaign contributions had distorted U.S. Mideast policy.

“Rep. Omar’s comments traffic in age-old stereotypes and anti-Semitic bias, drag down public conversation, and are counter to our fundamental values of religious freedom and mutual respect,” she said in a statement. “Elected officials must lead by example, particularly now, and carry out their responsibility to unite rather than divide the public.”