Gymnast Agnes Keleti survived the Holocaust to win 10 Olympic medals. At 98, she’s as feisty as ever. 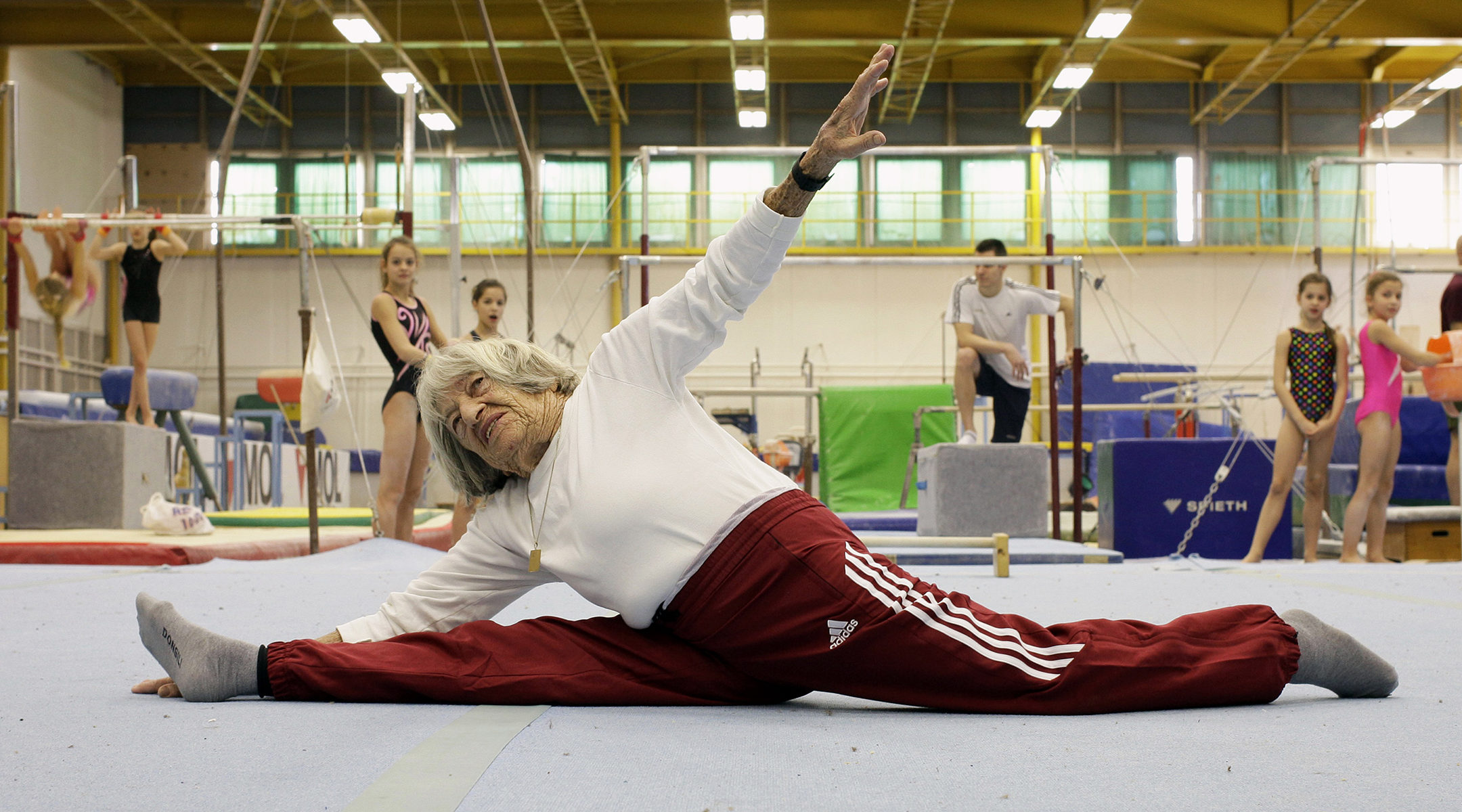 BUDAPEST (JTA) — When journalists ask Agnes Keleti about her health, she gently smiles and slowly extends her right hand in apparent gratitude for the question.

Keleti yanks anyone who is foolish enough to grasp her hand with enough force to throw them off their balance.

Then she replies: “I’m fine, thanks. Yourself?”

Such agility, defiance and humor are traits that helped Keleti, 98, survive the Holocaust in hiding and become Hungary’s most successful living athlete. She has no fewer than 10 Olympic medals as a gymnast — most of them won after she reached the relatively ripe age of 30. She is also among the most decorated female Jewish Olympians of all time, behind U.S. swimmer Dara Torres’ 12 medals.

Keleti, who left Hungary in 1957 and lived in Israel, is now celebrated as a national hero here, where she returned three years ago to be with one of her two sons.

In Budapest, Keleti leads a comfortable life in a central apartment that she shares with a female caretaker and about 40 orchids that had been discarded but rescued and nursed back to health by both women.

“I have a good life here, I feel at home,” Keleti told the Jewish Telegraphic Agency last week after lighting the Olympic flame at the European Maccabi Games. The quadrennial Jewish sporting event is being held in this capital city and ends Wednesday.

Keleti is entitled to a monthly stipend of $13,000 in accordance with a law that compensates Olympic athletes proportionately to the number of medals they won. (Only she and the late fencer Aladár Gerevich have won 10.)

She is interviewed regularly on national television here and invited to official events. A giant portrait of Keleti adorns the side of a building in Budapest alongside those of other living Olympic champions.

She didn’t always feel this secure.

Keleti has dementia that impacts her short-term memory, but has not changed her positive and cheerful outlook and disposition. Nonetheless, she recalled in the interview with JTA that she had left Hungary in 1957 because “there was a lot of anti-Semitism.”

“It wasn’t a good atmosphere to be Jewish, even for a star athlete,” she said.

Growing up in a well-to-do family, Keleti delighted her parents with her musical talent, which emerged as early as age 3 and led her to become a gifted cello player. Her athletic capabilities emerged at 4, when her father taught her to swim during a vacation near Lake Balaton.

“My father had two girls, and he raised me like a boy,” she said.

The outbreak of World War II, when Keleti was 18, halted her athletic development.

She survived the Holocaust thanks to falsified identity papers, pretending to be from the countryside and having little education.

She worked as a maid (“I was strong and I worked hard. Nobody asked questions,” she recalled) at an estate and later at a munitions factory. Keleti’s mother and sister were saved by the Swedish diplomat Raoul Wallenberg. Her father and uncles were murdered at Auschwitz.

Keleti resumed her training as a gymnast in 1946. She was prevented from competing at the London Olympics in 1948 because she broke her collarbone in training.

Four years later she won her first Olympic gold medal, in the floor exercise, at the 1952 Helsinki Games. Keleti was 31 and competed against athletes 10 years younger. She also won a silver medal and two bronze medals in other events, including uneven bars.

This would have been a respectable pinnacle for the career of any professional athlete.

But for Keleti, it was merely the warm-up to her spectacular performance at the ’56 Olympics in Melbourne. At 35, competing against gymnasts half her age, she collected four gold medals and two silver.

A video about Keleti’s Olympic career created by JTA’s sister site Kveller has been viewed more than 29 million times on Facebook.

“I drove myself hard,” Keleti said in reply to a question about the secret to her success. “I drove the girls I taught hard, too,” she added, referencing her years as the head coach of Israel’s national gymnastics team. “It’s the only way to get performance. Being nice and motherly doesn’t do it.”

Sergiusz Lipczyc, an Israeli former professional boxer who attended the Maccabi Games, recalls watching Keleti motivate her trainees at the Wingate Institute near Netanya in the 1960s.

“She was a tough cookie,” he said. “I remember her correcting one girl’s exercise by saying in front of everybody, ‘Don’t open your legs like that, it’s not nighttime just yet.'”

Two years shy of a century, Keleti still has a sharp tongue that makes it challenging to find suitable caretakers, her younger son, Raphael, said during the interview with his mother.

“It took a while to find someone who was emotionally unshakable,” he said.

Dismissing him with a wave of her hand, Keleti told JTA, “Never mind him, you’re not here to interview him, direct your questions to me.”

In retrospect, Keleti said the girls she trained were too young and that the teenagers competing internationally today are a crucial two years younger than they ought to be for their own physical and mental health.

“The girls begin too early in life and the exercises they do are too straining,” she said. “It’s become a circus. Training needs to begin at 16 and the earliest competing needs to happen is at 18.”

Keleti is credited with essentially founding the national gymnastics team in Israel. She said her arrival there was largely circumstantial.

While competing in Melbourne, the Red Army quelled an anti-communist uprising in Budapest. Keleti filed for asylum and stayed in Australia, where a former teacher from the Jewish Gymnasium in Budapest, Zoltan Dikstein, looked her up and persuaded her to attend the 1957 Maccabi Games in Israel.

The country was so poor and Keleti’s sport so undeveloped that she had to bring her own bar and rings.

Her arrival was a rare feather in the cap of Maccabi organizers and the Israeli media couldn’t get enough of Keleti. Her stardom helped secure her teaching position at the Wingate Institute, where she trained several generations of gymnasts.

It was in Israel that she met her late husband, Reuven Shofet, with whom she had two boys.

“I grew up knowing my mother was Wonder Woman,” Raphael said. “She ran the household, she taught us music, helped with our homework, cooked meals so tasty that all the neighbors’ kids wanted to stay for dinner. Oh, and in her spare time she was an international and local celebrity who traveled to coach athletes at the Olympic Games. No biggie.”

Keleti has visited dozens of countries in her lifetime. The ability to travel out of communist Hungary when few others could leave was a major reason she became a professional athlete in the first place, she said. But she hasn’t seen enough of the world, Keleti told JTA.

In 2017, she won the Israel Prize, the Israeli government’s highest civilian distinction, in the sports category.

Keleti was still able to perform a leg lift and a split that year, but she said her skin has since become too thin to safely attempt such feats now. The problem is keeping her from exercising for the first time in her life.

“But who cares,” she said. “There’s more to life than sport.”