Trader Joe’s is not your synagogue. But what if? 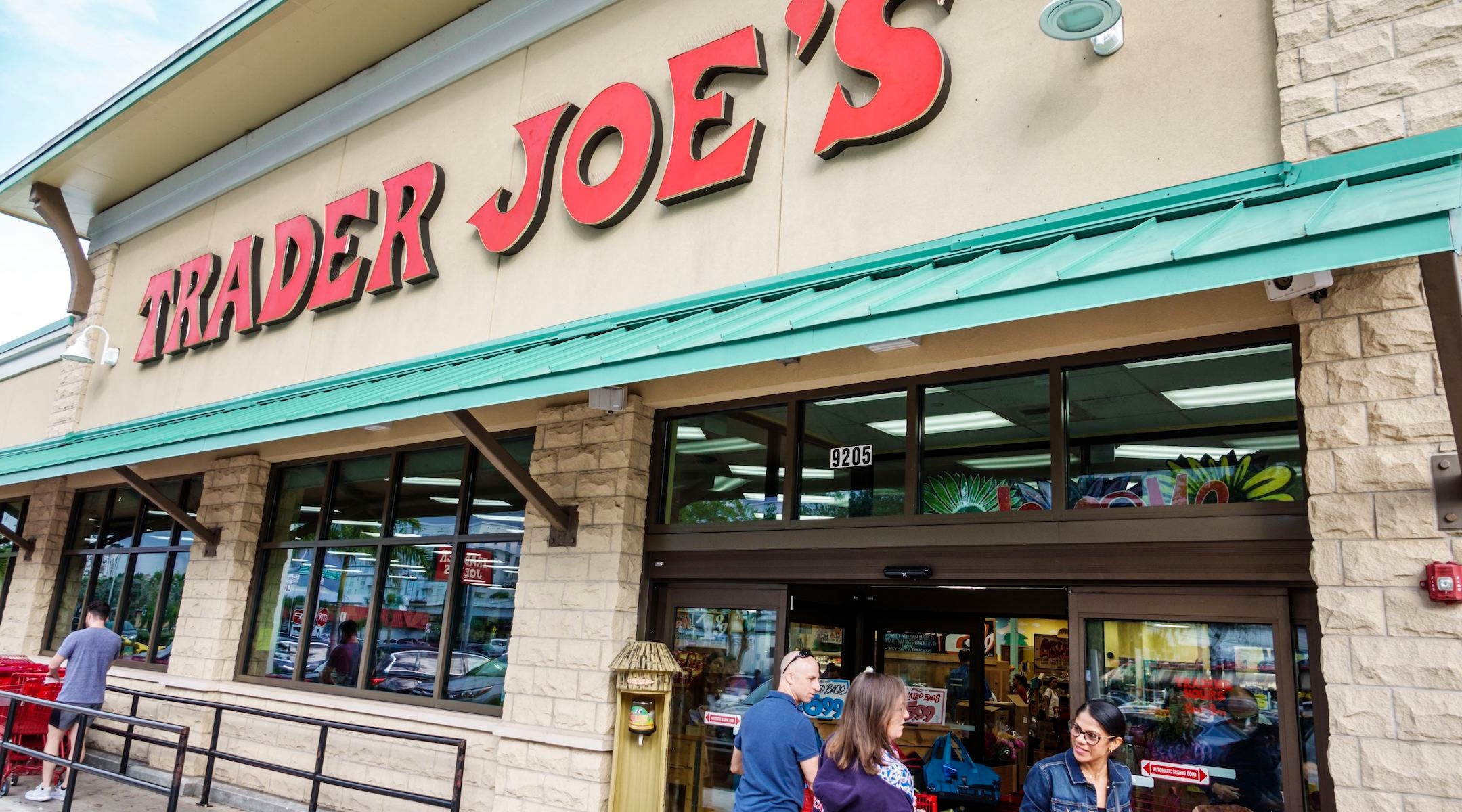 The view outside a Trader Joe's in Miami, Fla. Could some lessons of the chain’s success be applied to making Jewish life better? (Jeffrey Greenberg/Universal Images Group via Getty Images)
Advertisement

(JTA) — You know that thing when you pick up the leash and the dog runs to the front door, ready for his walk?

That’s me when my wife asks if I want to go to Trader Joe’s.

I’m not alone in this. The grocery chain has a big, almost cultish following. The lines in the Manhattan stores are DMV length, and a bouncer is often outside letting customers in one at a time. People regularly tweet about the store’s products, wondering why they discontinued the Boffo candy bar or the Roasted Cocoa Nibs (OK, that was just me). I actually listen to the company podcast, which is the journalistic equivalent of subscribing to an inflight magazine — but I do it anyway.

I could spend hours chatting on the “Kosher Trader Joes” Facebook page. Come join 36,000 members as they heatedly debate whether the frozen Shakshuka Starter is the best or worst idea ever.

Why am I so devoted to a grocery chain? Is it the friendly Margaritaville vibe? The free coffee and samples? The workers who actually stop what they are doing and walk you to the product you can’t find?

The answer is yes, yes and yes — and if you are suggesting that I need a hobby, know that I am not alone in pondering how this California-born, now German-owned chain earns more revenue per square foot than any of its competitors. The Freakonomics radio show recently reran an episode devoted to the topic.

So no, it’s not just me. But I am perhaps the first to wonder how the lessons of TJ’s success could be applied to making Jewish life better.

But first, here’s what Freakonomics found out when it asked academics and former TJ’s employees (the company is fairly tight-lipped) about what makes it successful:

The employees — that army in Hawaiian shirts — are friendly and available. Freakonomics host Steven Dubner explains that Trader Joe’s stocks its shelves during business hours (unlike typical grocery stores), so the staff interacts with customers.

The stores are familiar and distinct. TJ’s tiki bar aesthetic was developed for its first store in Pasadena, California, but each store reflects its particular locale (the walls of my local branch feature a timeline of northern New Jersey’s historical highlights — that’s not an oxymoron, wiseguy).

“There’s a playful vibe, as if to say, ‘Hey, you’re just buying food; food is delicious, so enjoy yourself,'” Freakonomics explains. “There’s also an artsy vibe, a writerly vibe — more so, oddly enough, than in a typical bookstore.”

TJ’s offers choice — but not too much choice. Sheena Iyengar, a professor at Columbia Business School, has done studies showing that people want variety, but in moderation.

“When it comes down to making a choice, we don’t want that choice to be too hard or too conflict-ridden or too burdensome,” she explains.

“They don’t overwhelm you with choice, which is why you’re more willing to examine each novel choice,” Iyengar says.

It mixes tradition and novelty, the familiar and the new. Customers have their favorite products, but TJ’s is “famous for constantly introducing new products — experimenting with them, really,” Dubner explains.

Iyengar compares it to a treasure hunt.

“It doesn’t give me the boring stuff, it keeps me excited because I want to see, what do they have?” she says. “And what do they have that might get me thinking about something I don’t ordinarily think about? So they also maintain the mystery of novelty for me.”

They mix the high and the low. Dubner calls it “a rather unsubtle blend of healthy, or at least healthy-seeming, and hedonistic.” So the Organic Green Vegetable Foursome sits across the freezer aisle from the Cookie Butter Ice Cream. TJ’s honors your aspirations to feel better about yourself, even offers the goods to help you, but also says you are entitled to cut loose a little.

Not everything about TJ’s translates to, say, your local synagogue. TJ’s relatively low prices are a big draw. People will always complain about the high price of being Jewish, although how a synagogue can keep its dues low and keep its lights on is beyond my expertise as an English major.

But TJ’s has figured out a way to turn a dutiful chore into something resembling a community. There’s a lot to work with there. Can Jewish institutions be friendlier and do more to make their members and constituents feel more welcome? Do they pay enough attention to the physical environment — the design cues that reflect the values of the congregation or the organization? Can a spirit of experimentation and novelty — even whimsy — live alongside the traditions that are non-negotiable?

Michael Roberto, a business professor at Bryant University, says it’s difficult to replicate the way TJ’s does business. But certainly places that are trying to engage people spiritually and intellectually can emulate what he calls the “soft things”: “Not just the kind of people you hire, but the way you train them and the culture you create.”

Am I saying Jewish institutions need to treat average Joes like Trader Jews? No. I would not stoop to so low a pun.