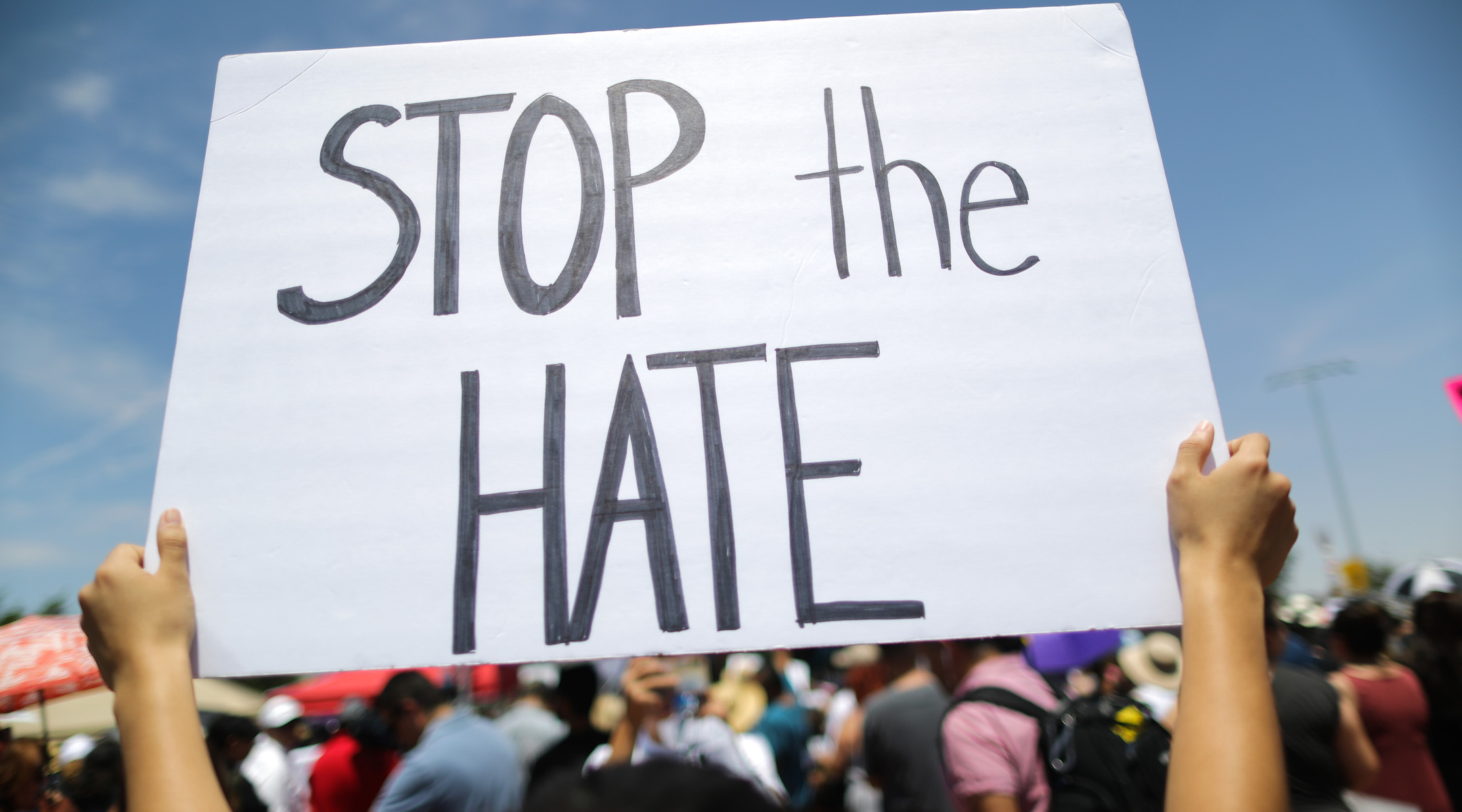 A demonstrator holds a sign at a protest against President Trump's visit following the mass shooting in El Paso, which left at least 22 people dead, on Aug. 7, 2019 in El Paso, Tex. (Mario Tama/Getty Images)
Advertisement

WASHINGTON (JTA) — After a white supremacist gunman murdered 22 people in El Paso, Jewish groups that track hate say now is the time to get serious about the threat from the far right.

In fact, Jewish security officials say, the crisis calls for the kind of response that followed 9/11 — building a system to track white supremacists from scratch. Since the 2001 attacks, white supremacists have been responsible for a far greater number of killings than international terrorists.

The El Paso shooter cited the racist “great replacement” theory — that people of color and Muslims plan to “replace” whites in the West — in his manifesto. His targets were Mexicans.

The same theory fueled the murder of 51 Muslims at two New Zealand mosques earlier this year. Similar theories spurred deadly attacks over the past year at synagogues in Pittsburgh and in Poway, California. According to the Anti-Defamation League, white supremacists have killed at least 73 people since the August 2017 neo-Nazi march in Charlottesville, Virginia.

“We need a wholesale rethink, in terms of our domestic security posture, to address violent extremism and bias crimes,” said George Selim, a former senior official at the Department of Homeland Security who is now the ADL’s senior vice president for programs.

Critics of President Donald Trump say he has used rhetoric similar to white nationalists in describing immigrants (“invasion”) and areas populated by people of color (“infestation”). Questions have resurfaced about Trump downplaying the white nationalist threat and rolling back programs that track white supremacists.

Trump visited El Paso on Wednesday, and appears to have recognized, at least rhetorically, the need to face down white supremacists.

“In one voice our nation must condemn racism, bigotry and white supremacy,” Trump said at the White House on Monday. “These sinister ideologies must be defeated. Hate has no place in America. Hatred warps the mind, ravages the heart and devours the soul.”

Jewish security officials say it may not be  enough in dealing with white supremacists, and hearken back to what happened after 9/11.

“We need to harness some of that same energy that we as a country demonstrated 18 years ago to face this new threat and provide law enforcement with what they need to confront a threat that number for number has been more deadly than foreign terrorist organizations,” said Michael Masters, who directs the Secure Community Network, the security arm of national Jewish organizations.

The 9/11 attacks led to a spate of efforts to track international terror: the creation of the Department of Homeland Security; the enactment of the Patriot Act; the enhanced targeting of the financial networks that fund terrorists.

”We do not have the necessary tools,” said Masters, a former senior official at the Cook County, Illinois, DHS. “Law enforcement can’t take advantage of the same tools to address terrorism as they can international terrorism.”

Michael German, a former FBI agent who infiltrated white supremacist groups, said Homeland Security is ill equipped to address the threat. That’s both because of Trump administration disinterest, he said, and because DHS concentrates on tracking publicly available intelligence sources rather than focused investigations.

“Its agents don’t do the investigations, so it doesn’t really have direct access to reliable and up to date information that would be useful to intelligence products it publishes,” said German, who is now a fellow at the Brennan Center for Justice.

Fighting domestic terrorists like the government fights foreign ones could be a hard sell. Progressive Democrats already are calling for the dismantlement of DHS, identifying it with what they call the Trump administration’s excesses in detaining and deporting migrants. The Patriot Act, which passed overwhelmingly in its day, became a bugbear of the left because civil libertarians object to how it enabled email and cyber surveillance.

An FBI official said that free speech rights do not allow tracking people according to their membership in a group, or because of their ideology.

“The FBI investigates activity which may constitute a federal crime or pose a threat to national security,” the official wrote in an email. “Our focus is not on membership in particular groups but on criminal activity. The FBI cannot initiate an investigation based solely on an individual’s race, ethnicity, national origin, religion, or the exercise of First Amendment rights, and we remain committed to protecting those rights for all Americans.”

Masters and Selim emphasized their attachment to the First Amendment, and said the changes they were seeking should not impinge on speech freedoms. Masters said his Secure Community Network and ADL are training Jewish institutions to identify potentially dangerous markers in communications they receive. The number 14 and 88 both have significance for neo-Nazis and are used in their communications, for example.

But they said there are several ways the government tracks international terrorists that could apply to domestic terrorists as well.

“While law enforcement can monitor communications between people connected with foreign terrorist groups, even for U.S. citizens,” he said, “those same tools don’t exist for terror groups in the United States.”

In watching international terrorism, authorities are able to track key words and phrases in online communications and then seek a warrant to identify the interlocutors.

Tracking finances: The Treasury, using the State Department designated-terrorist list, is able to stop financial transactions that provide “material support or resources” to a foreign terrorist organization. The prohibition could be applied to domestic groups, Masters said, and allow for the prosecution of those who provide material support to domestic terrorists.

Breaking down silos: The Patriot Act increased information sharing among government agencies and law enforcement. (The CIA failed to share information with the FBI that might have led to the identification of the 9/11 attackers.)

Masters said that intelligence sharing on domestic terrorism could be enhanced at all levels, including internationally.

“One thing we have to recognize, the connections between manifestos in Christchurch [New Zealand], Poway and El Paso — there is a connection between these movements internationally,” he said, as well as with neo-Nazis in Ukraine.

Social media: Because of the First Amendment, social media giants have been reluctant to ban white supremacists in the United States. But Masters said that, as private companies, they have that ability, and should be pushed harder to combat bigotry on their platforms.

“Recognizing the incredible import of free speech protections, that is separate from the abilities of a private company to recognize when their platform is being used in such a way that does not meet the standards set for their own platform,” he said.

Education: “It’s not limited to arrest and incarceration,” Selim said. “We need efforts at the state and local level, convened by the federal government, that integrate law enforcement, mental health and education providers to provide whole community wraparound services to intervene in the process that we know takes place when individuals are consuming incendiary literature, when individuals are saying ‘white genocide.’”

German, the former FBI agent, said that process, known as community policing, must be handled with care. He added that previous programs to counter violent extremism were at times “damaging to the communities they targeted and often thinly veiled intelligence-gathering operations.”

“The police are part of the problem, so empowering them absent a larger police reform effort seems problematic,” German said. “The communities often targeted by white supremacist violence are also disproportionately victims of police violence and abuse.”

Masters said that the government officials now staffing threat assessment are eager to do the work.

“We have no stronger partners in the community than the men and women working in these organizations,” he said. “They are supporting us on a daily basis.”

In New Rochelle, where NY’s outbreak began, my parents’ community yearns for normal

Amid George Floyd protests, Trump called Antifa a terror organization. Here’s what you need to know about the anti-fascist group.

Tending wounds and distributing supplies: Minneapolis Jews care for a city in turmoil

‘We stand in solidarity’: Jewish organizations respond to the protests over George Floyd’s death