In Hungary, some left-wing Jews are ready to work with a far-right party led by a former neo-Nazi 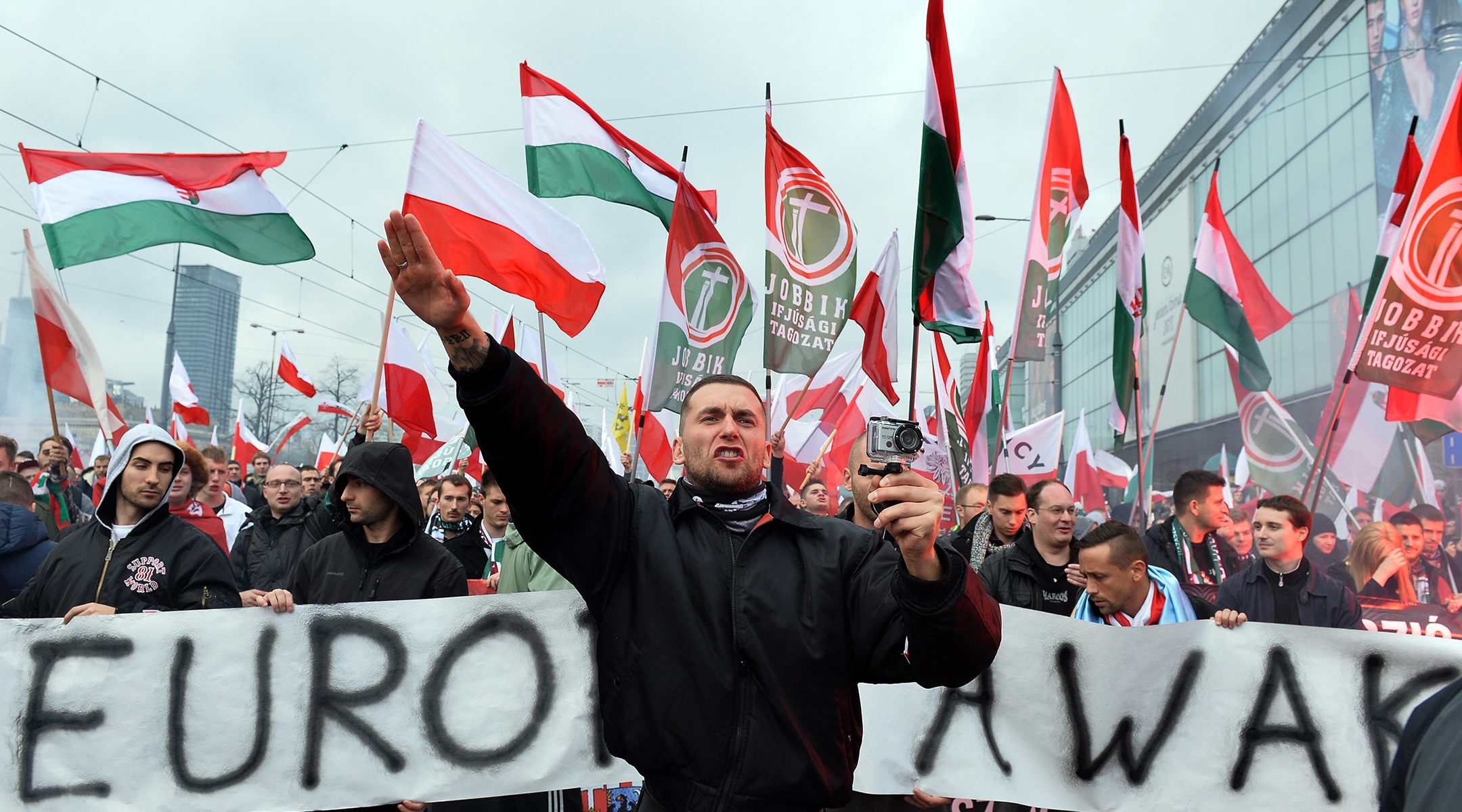 BUDAPEST (JTA) — In 2011, Hungary’s largest Jewish group called on the Justice Ministry to ban the far-right Jobbik party, describing it as “anti-Semitic” and “fascist.”

Now some in the Jewish community, and even inside Mazsihisz, see Jobbik as a legitimate partner for effecting democratic change, despite its blunt racism.

Years ago, opposing Jobbik was natural for Mazsihisz, a liberal-leaning federation of Hungarian Jewish organizations. Jobbik’s virulent incitement has made it an outlier, even among European ultranationalist movements.

Despite some attempts at rehabilitation, racism still appears to be part of Jobbik’s political DNA. Its current leader, Tamas Sneider, is a former skinhead who confessed to beating a Roma person in 1992 with metal cables in an allegedly racist attack. In a 2013 speech in parliament, Jobbik’s second in command, Marton Gyongyosi, called for drawing up a list of all Hungarian Jews because they are “security risks.”

But the political landscape has shifted. There is growing frustration with the ruling party, the right-wing Fidesz, and its iron grip on power. Anti-Fidesz left-wingers, including within Mazsihisz, have turned toward Jobbik as a potential partner.

This process has resulted in an unlikely alliance ahead of local elections in October featuring Jobbik and left-wing parties that once were among its harshest critics, including the Hungarian Socialist Party and the Democratic Coalition.

Many observers are stunned by the cooperation between ultranationalists and their formerly staunch opponents. World Jewish Congress President Ronald Lauder wrote in February that reports of the alliance “deeply troubled” him.

But to many Hungarians who have had enough of Fidesz rule under Prime Minister Viktor Orban, the deal makes sense.

A masterful politician with nationalist populist tendencies, Orban has had an unshakable hold on Hungary’s politics for more than nine years thanks to a series of landslide electoral successes after first serving as prime minister from 1998 to 2002. He has made Fidesz so powerful that the party has received triple the votes of the runner-up in every parliamentary election since 2010.

Against this backdrop, Jobbik and left-wing parties hope their newfound partnership will deliver the first major blow in nearly a decade to Orban’s hold on power.

The Orban years have been bad for liberals. He has cracked down on human rights groups, immigration, the rule of law, higher education and the free press. But his populist shift has harmed Jobbik, too, having stolen its base. Jobbik crashed in this year’s European Parliament elections, receiving only 6 percent of the vote compared to 14 percent in the 2014 elections.

In response, Jobbik has pivoted from promoting crude anti-Semitism to competing for mainstream voters.

Gabor Vona, the party’s previous leader, sent a Hanukkah greeting to Jewish groups in 2016. The next year, he said Jobbik would drop its anti-Israel line and “treat Israel as any other country.”

In 2014 and 2015, Vona had vowed to “immediately resign if somebody found out I had Jewish ancestry.” But in a 2017 interview with the Forward, Vona said, “Over the past two or three years I made it clear that there is no place for any racism or anti-Semitism in the party.”

That claim was a dramatic shift for Jobbik, whose nationalist line has become more inclusive and focused on Fidesz’s corruption scandals. But given the party’s history, liberal and Jewish community leaders dismissed Vona’s recent statements.

As Jobbik tried to soften its image, the Orban government’s relations with Mazsihisz became more fraught than ever. In 2014, the Jewish group suspended its contacts with government officials because of a Budapest statue that it said whitewashes Hungarian complicity in the Holocaust. Other Jewish groups disagreed with that position.

“Theoretically, the situation is that now in Hungary, Fidesz is the far-right party and Jobbik is a center-right party, but still on the far right,” said Adam Schoenberger, director of Budapest’s Marom Jewish progressive organization.

Schoenberger, however, is also critical of the left-wing’s alliance with Jobbik because he believes it is doomed to fail.

Debate over the left-Jobbik alliance erupted last year in the Jewish community when a local Jewish leader endorsed a Jobbik mayoral candidate named Attila Kiss. The Jewish leader said Jobbik “is not a Nazi party.”

But in 2009, Kiss had called on fellow city councilors to “take up sickles and hacks” and “exorcise the synagogue.” Mazsihisz filed a criminal complaint against Kiss, accusing him of incitement to racist violence, but it was dismissed by local prosecutors.

Mazsihisz distanced itself from the endorsement of Kiss. But, tellingly, the group’s statements did not condemn Jobbik specifically and spoke only of the organization’s commitment to nonpartisanship in general.

“For the past three, four years, Mazsihisz has indeed been much less critical of Jobbik,” Peter Feldmajer, a former Mazsihisz president, told the Jewish Telegraphic Agency. “Someone [at Mazsihisz] has figured out that the left-wing opposition must join forces with Nazis to overthrow Fidesz.”

Feldmajer criticized the new alliance, calling it “a disgrace and a betrayal.”

Mazsihisz has denied endorsing the deal between the left wing and Jobbik, and says it is not allied with any party.

“We have never had, we don’t have and we will not have any relation with Jobbik,” Mazsihisz President Andras Heisler told JTA. He also doubted Jobbik’s sincerity about opposing anti-Semitism, given that the party’s leaders have made anti-Semitic statements.

Rabbi Shmuel Glitsenstein, one of 17 rabbis working for the Chabad-affiliated EMIH rabbinical group in Hungary, strongly disagrees with the idea that Fidesz is a threat to Jews.

“From a Jewish perspective, the Orban governments have been close to ideal,” he told JTA.

Both EMIH and Mazsihisz have received millions of dollars’ worth of assets and funding in recent years from the government, leading to several new synagogues and Jewish schools opening across the country.

“Those who spoke about fighting anti-Semitism and are now ready to cooperate with Jobbik expose their hypocrisy and indifference to the hatred of Jews,” Glitsenstein said.

The Hungarian Jewish community is perceived as largely liberal, and if it is upset about the Jobbik alliance, the community is not being vocal about it. Left-wing parties have seen some internal dissent over the alliance, Schoenberger said, but they have not had a mass desertion of Jews like the one experienced by Britain’s Labour Party, which is facing its own anti-Semitism problem.

The left-wing parties and supporters of the “stupid coalition with Jobbik entered it out of utter desperation,” said János Kőbányai, the left-leaning editor of Múlt és Jövő, a Hungarian-Jewish magazine. While he rejects the deal, Kőbányai shares the despair he says led to it.

“Orban is dismantling democracy, revising history, including of the Holocaust, and curtailing freedoms Hungarians died to preserve,” Kőbányai said. “I fear that in such a climate, no Jews will want to come to the synagogues he is helping to build.”