Problems arise when you’re Jewish at the Renaissance Faire

By Wilhelmina Gottschalk August 14, 2019 2:30 pm
from Kveller This link opens in a new window 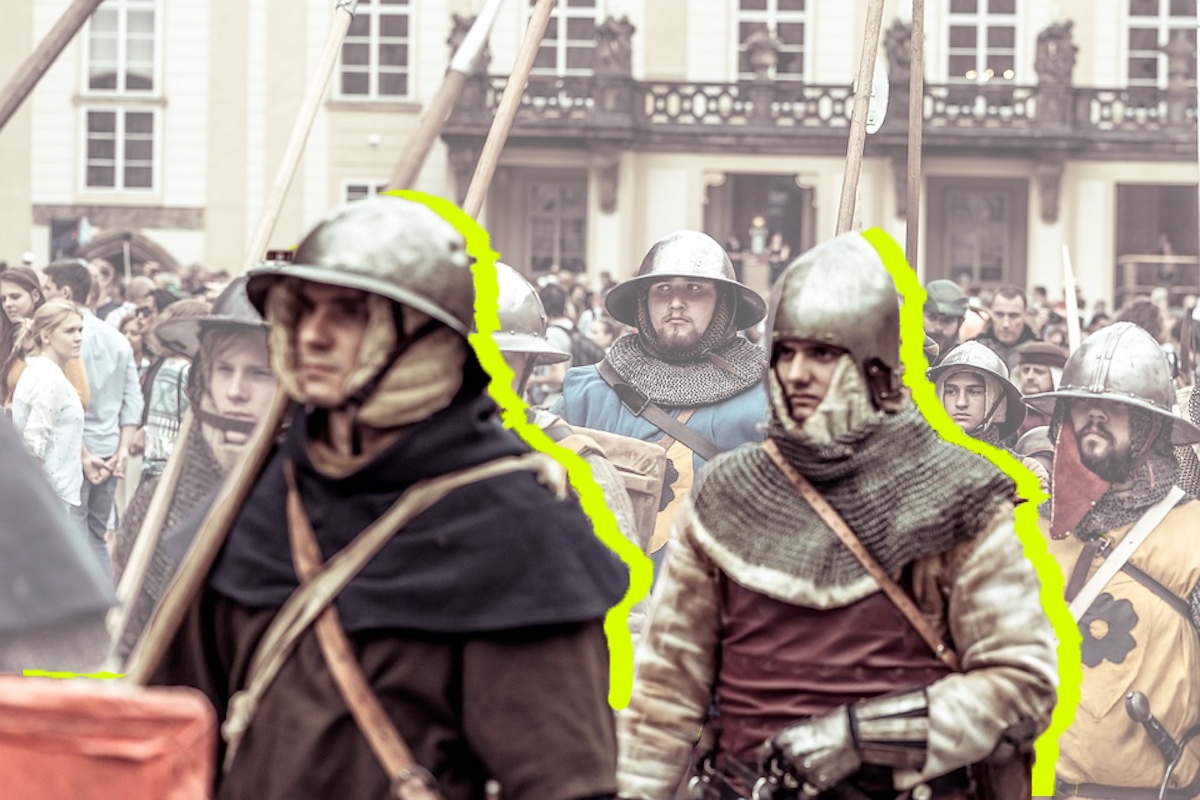 “To repeat, after you have been knighted by Her Majesty the Queen, you will proceed in this direction to receive your certificate,” said the woman, speaking in courtly, faux British accent.

She was wearing an elaborate costume — including a heavy, full brocade skirt —  despite the sweltering temperature. Yet she was clearly enjoying herself as she prepared participants for a “children’s knighting ceremony” at the local Renaissance Faire.

I had taken my kids, ages 4 and 6, to the Renaissance Faire — an outdoor festival that’s in a semi-historical, if anachronistic, setting that is roughly supposed to resemble Elizabethan England. Included in the ticket price are entertainment options for all ages — including bawdy tavern songs, blacksmith demonstrations, jousting tournaments and the opportunity to rest on pleasantly shaded benches while the queen of the festival conferred titles on babies, toddlers and young children.

My kids seemed semi-interested in being knighted, which meant this activity was winning out over all the other entertainment options we had tried so far. Participating in an interactive dramatic story about a friendly dragon was deemed “boring;” marching with the local militia had not been (perhaps thankfully) a draw; even the bright red shaved ice they had begged for after lunch had turned out to be a disappointment.

Needless to say, our day was not going how I’d imagined it would. I love Ren Faires — I even worked at one during high school, hawking hand-dyed tunics and skirts that the whimsical shop owner had sewed through the winter and sold all summer. I have fond memories of going to my first faire, when I was 7. I wore a conical hat with hot pink veils that draped from the top, and I loved the way everyone called me “m’lady.”

My children, however, were unimpressed by the costumes, the live shows and the silly antics. I was starting to hear the dreaded question, “When can we go home?” This chance to be knighted by the queen was one of my last hopes for giving them a good impression of the day.

So, we joined the queue and waited for the queen to arrive. A few minutes later, she came to greet the small lords and ladies lined up to receive her favor — sorry, favour.

The herald called out the name of the first child. The queen then held the sword above the kid’s head and proceeded to tap each of his shoulders, as she announced to the gathered families: “In the name of God, Saint Gregory and Saint Michael, I dub thee Sir Tanner, defender of the realm.”

Hearing the words of the knighting — the saints, in particular — I realized that I had a problem. Or, at least, a choice to make. I hadn’t expected this ceremony would have a religious element, and I definitely hadn’t thought that my children would receive their titles in the name of saints, devout Christians who had lived their lives according to a faith very different from ours.

As I saw it, I had two options. Option 1: I could sit quietly and let the kids be knighted in the names of Saint Gregory and Saint Michael. They had never heard of saints, and I doubted there was too much blasphemy involved in receiving a fake title from a fake queen who had become royalty simply by rising through the ranks of the local Ren Faire players. Not a big deal, right?

Option 2: Disrupt the ceremony — thereby earning myself the title “Lady Weird Mom” — and take a stand for religious pluralism in make-believe Elizabethan England.

Whatever my personal preference, I had noticed my husband tense as soon as the queen mentioned the saints. And so, like Mordechai from the Purim story — who would bow down only to God — it was time for me to bring my religious identity to the royal court.

I made my way to the lady’s maid, who was helping the children line up in an orderly fashion for their knightings.

“Hi! Um, excuse me, is there any way I can get my kids knighted without mentioning the saints?” I asked.

The maid, a woman in her 20s or 30s who clearly had experience corralling children on behalf of Her Majesty the Queen, looked confused.

“Without mentioning the saints?” she asked. This was obviously not a question she heard often.

I nodded. “Right, without the saints,” I said.

“We’re Jewish,” I added, hopefully communicating that though my request may seem a bit absurd, at least it was absurdity with precedent.

“I suppose we could do that,” she said. “No one has ever asked before. Perhaps they could be knighted in the name of an angel? Perhaps Azriel?”

I couldn’t remember offhand who Azriel was, and seeing as I’m a Jewish educator, I didn’t think that was a good sign.

“An angel sounds great,” I said. I named the first two angels I could think of — archangels that are said to reside close to the divine throne and who, conveniently, have name recognition in both Jewish and Christian settings.

“How about Gabriel or Michael?” (Later I learned that Azriel was the angel of death. Quite a choice for a 4-year-old’s knighting, so I’m glad I passed!)

“Very well,” the lady said, still in character and speaking with the appropriate British-ish accent. “When you approach the queen, I shall go with you to inform her of the change. The queen is a bit on autopilot when she performs the knightings, so it may take her a moment to understand the request. Are your children both young lords?”

“Very well. In whose name would you like the young lady knighted? The queen prefers to use Saint Anne.”

Now it was my turn to be confused — my first thought was that angels are androgynous and should be fine for any young lord or lady. However, when the queen’s handler suggested that my daughter be knighted in the name of Sarah, in addition to an angel, I agreed rather than debate an angel’s gender identity.

“So, Sarah and which angel?”

A few minutes later, my 4-year-old daughter, the lady’s maid, and I approached the queen.

The maid quickly explained to the queen that there was a slight change in the ceremony, and that my daughter should be knighted “in the name of Sarah and Gabriel.”

“No, just Sarah,” I said. “From the Bible.” And then, back to that urge to make the request sound reasonable, “We’re Jewish.”

“Very well,” the queen said. But then, before starting the ceremony, she asked in appropriate Elizabethan fashion: “Do you know God?”

“Yes,” I said, glad that I understood what her oddly phrased question meant.

The queen held the sword over my daughter’s head and proceeded to tap her shoulders: “In the name of God, Sarah and Gabriel,” she said, “I dub thee Lady Hedy, defender of the realm.”

The queen’s guard indicated where we should go to receive a personalized certificate. I was so relieved that the knighting was over that I didn’t even witness my 6-year-old’s ceremony, presumably performed in the name of God, Michael and Gabriel. But in that moment, I was just another mom at the Ren Faire, repeating the spelling of my child’s name to the court calligrapher.