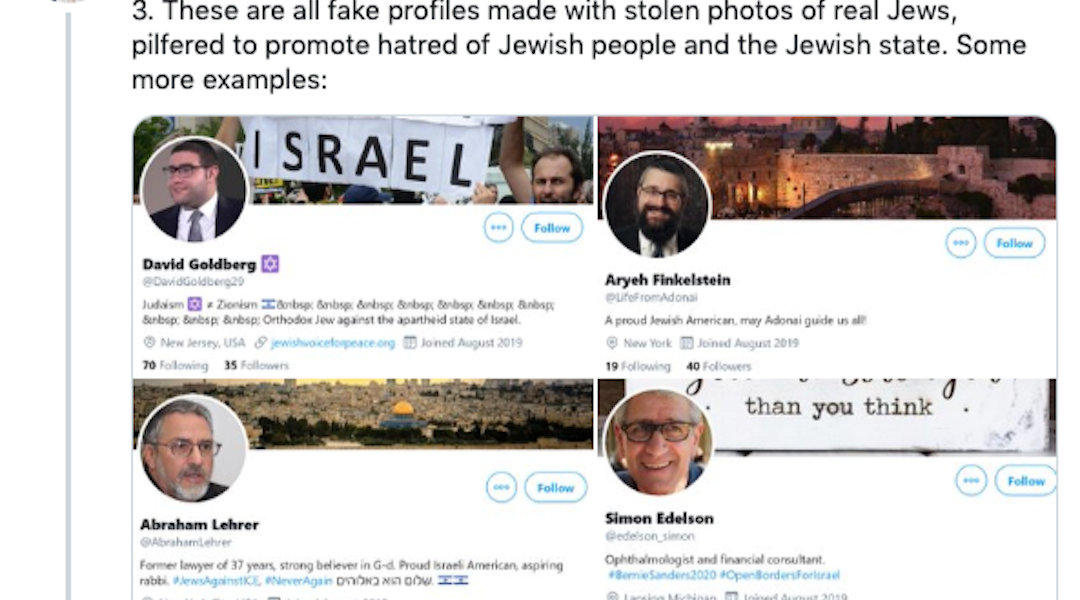 “You will have the benefit of labeling anyone an anti semite who disagrees with you,” the anonymous post suggested on Friday.

Various Jewish Twitter users shared screenshots of the fake accounts and the 4chan post on Monday, including Atlee Solomon and Yair Rosenberg. The fake accounts use photos of real and purported Jews and stereotypically Jewish names.

3. @AdelbergChaim is also a fake account with the image taken from a stock photo as shown here:

2. After the call went out on 4chan, a network of new Twitter accounts run by white supremacists pretending to be Jews popped up. Often, they masquerade as Orthodox Jews, Israelis and/or Jewish leftists. They all follow each other and promote anti-Semitic and anti-Israel content. pic.twitter.com/rA2cFBm8jW

Some of the accounts claimed to be affiliated with Jewish Voice for Peace, a left-wing organization that supports the Boycott, Divestment and Sanctions movement against Israel. Others expressed support for Bernie Sanders’ presidential campaign and Jewish protests against ICE. Many promoted anti-Semitic ideas.

“#JewishRacism is alive, well, and very real. I am Jewish and see this same hatred towards European people from Jews every day,” read a Friday tweet by an account using the name “Simon Edelson.”

“Some of us Jews have been known to bend the truth at times for our own advantage,” read a tweet by an account called “Chaim Adelberg.”

Avital Chizhik Goldschmidt, an editor at the Forward, said one of the accounts used a photo of her husband, a rabbi, under a fake name and biography.

Impersonation campaigns have become a tool for online trolling and disinformation campaigns by governments and private individuals. On Monday, Twitter and Facebook took action against China for using hundreds of fake accounts to sow political discord during the Hong Kong protests.

Under Twitter policy, “accounts portraying another person in a confusing or deceptive manner may be permanently suspended.”

A Twitter spokesperson said the social media site was aware of and looking into the profiles.

“Based on our investigations, we have already permanently suspended several accounts. When we find accounts in violation of our policies, we take action according to our rules,” the representative told the Jewish Telegraphic Agency in an email.

The lightly moderated 4chan has developed a reputation for serving as a platform for malicious posts and online harassment schemes.