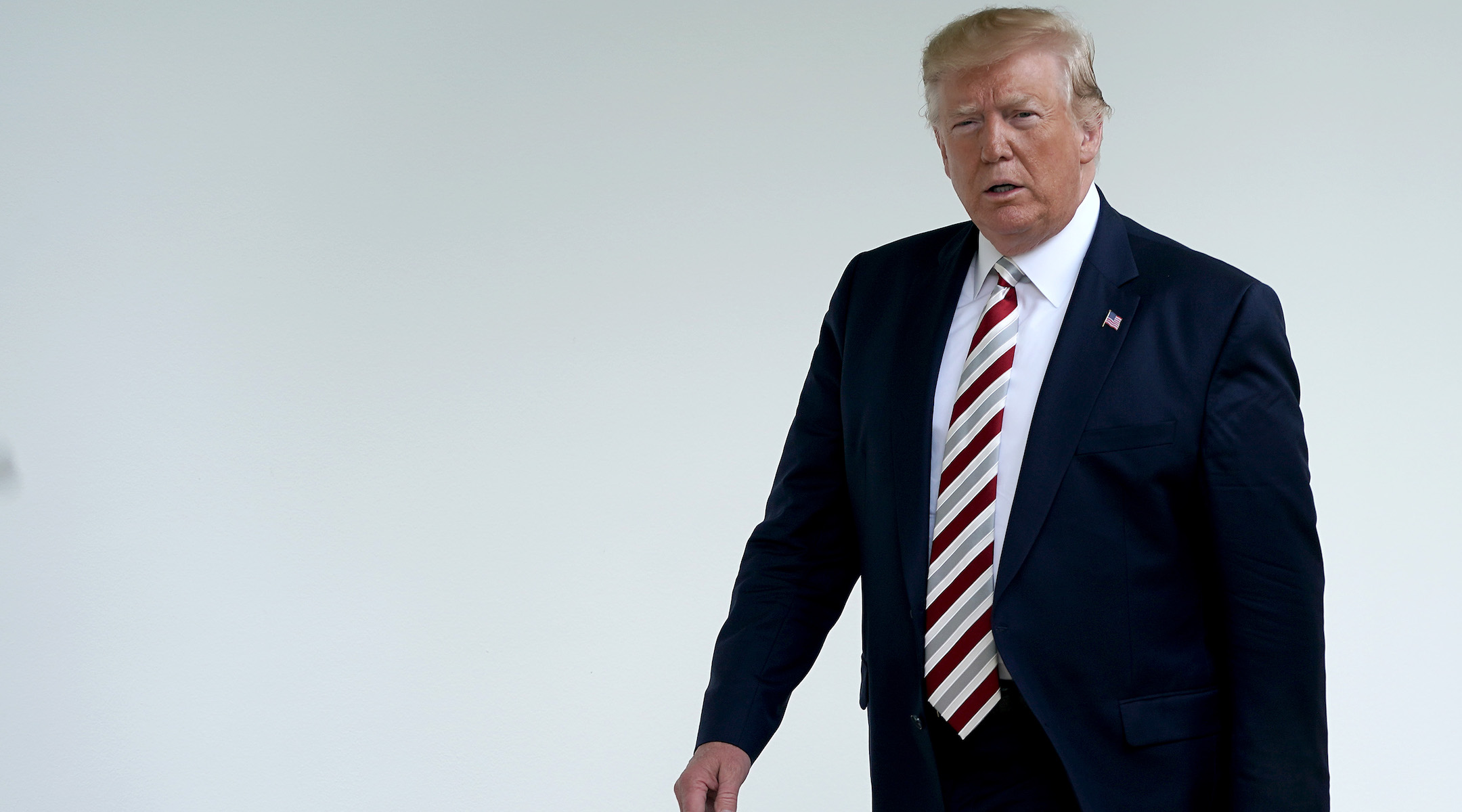 (JTA) — Centrist and left-wing Jewish groups panned President Donald Trump for accusing Jews who vote for Democrats of disloyalty, with some calling his remarks “dangerous,” “divisive” and displaying “textbook anti-Semitism.”

“I think any Jewish people that vote for a Democrat, I think it shows either a total lack of knowledge or great disloyalty,” Trump said at a news conference Tuesday.

A reporter had asked Trump about remarks by Rep. Ilhan Omar, D-Minn., that the United States should reconsider its aid to Israel after the Jewish state denied entry to her and Rep. Rashida Tlaib, D-Mich., both supporters of the Israel boycott movement.

American Jewish Committee CEO David Harris called on Trump to “stop such divisive rhetoric and to retract his disparaging remarks.” He called the president’s remarks “shockingly divisive and unbecoming of the occupant of the highest elected office,” and said that American Jews “have a range of political views and policy priorities.”

The Anti-Defamation League’s CEO, Jonathan Greenblatt, said in a tweet that it is “long overdue to stop using Jews as a political football,” and that charges of disloyalty have long been used to attack Jews.

Trump’s comments are “unsurprising given his record of abhorrent and dangerous remarks, as well as his efforts to leverage Israel as a wedge issue in U.S. politics,” David Halperin, executive director of the Israel Policy Forum, said in a statement that called on Republicans to join Democrats in condemning the comments.

The comments show a “total lack of knowledge about Jewish people,” Daniel Sokatch, CEO of the New Israel Fund, said in a statement. “Trump wants to weaponize Israel and anti-Semitism to attract Jewish support, all while aiding and abetting Israel’s ultranationalist right, coddling white nationalists, fawning over dictators, and engaging in the worst kind of divisive racial politics at home. But it won’t work. In fact, it is a sure-fire way to alienate the American Jewish community even further … SAD!”

Stosh Cotler, CEO of Bend the Arc: Jewish Action, said that “President Trump’s abhorrent statement today accusing the vast majority of Jewish Americans who oppose him of ‘disloyalty’ is textbook antisemitism and should be called out as such, without hesitation.”

“I am a proud Jewish person, and I have no concerns about voting Democratic,” Sanders told a cheering crowd. “And, in fact, I intend to vote for a Jewish man to become the next president of the United States.”

Halie Soifer, the executive director of the Jewish Democratic Council of America, slammed the president’s comments.

“President Trump is right, it shows a great deal of disloyalty to oneself to defend a party that protects/emboldens people that hate you for your religion,” the group said on Twitter. “The @GOP, when rarely confronted w/anti-Semitism of elected members always acts swiftly and decisively to punish and remove.”