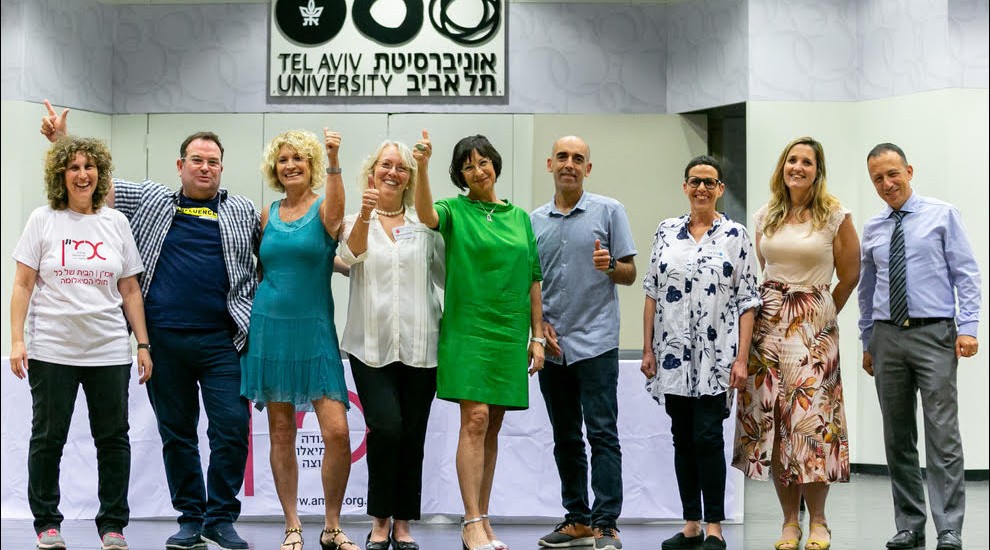 Members of AMEN, the Israeli Association of Myeloma Patients, attend a patient conference at Tel Aviv University, May 2019. (Courtesy of AMEN)
Advertisement

TEL AVIV — Shlomit Norman was only 42 when doctors diagnosed her with multiple myeloma — a bone marrow cancer with no known cure that rarely strikes people under the age of 65.

At the time, the youngest of her three boys was 10, and few patients with the disease survived for more than a couple of years.

“I told my best friend that she’d have to be in charge of my son’s bar mitzvah because I didn’t think I’d be around by then,” recalled Norman, who lives in Haifa.

But thanks to some innovative treatments with roots in Israeli research, Norman managed to outlive her initial prognosis and today leads a relatively stable life 12 years later.

“For the first 10 years after I was diagnosed, I was in a partial remission after my first bone marrow transplant and I had a fantastic quality of life,” she said. “But in 2016, I relapsed and had another transplant. Since then, I’m on maintenance medicine. Other than fatigue, and numbing in the hands and feet, I’m OK.”

According to the American Cancer Society, some 13,000 Americans die annually from multiple myeloma — commonly referred to as myeloma and first documented in 1844. But the typical life expectancy for patients following diagnosis has surged from two years to nearly 10. Some people now live for more than two decades with the illness.

A significant part of the global progress in treating multiple myeloma — in which the body produces too many plasma cells, “crowding out” other types of blood cells like platelets and red cells, all of which are necessary for optimal health — stems from research conducted in Israel.

In 2004, Aaron Ciechanover and Avram Hershko, scientists at Haifa’s Technion-Israel Institute of Technology, won the Nobel Prize in Chemistry, along with American biologist Irwin Rose, for their discovery years earlier of the ubiquitin proteasome system, a pathway responsible for the degradation of proteins within the cell.

This discovery was crucial to the creation of a whole class of treatments called proteasome inhibitors — drugs that slow the degradation of protein and thereby inhibit the cancer’s progress, explained Dr. Yael Cohen, head of myeloma services at Tel Aviv’s Ichilov Hospital, also known as the Sourasky Medical Center.

“Velcade, a drug which came out of that, was revolutionary, and it’s still used as first-line treatment for myeloma in most places around the world,” Cohen said.

Dr. Mark Israel, national executive director of the New York-based Israel Cancer Research Fund, which helped fund Ciechanover’s research and raises millions of dollars every year for cancer research in Israel, said the early work on proteasome inhibitors was groundbreaking even if the scientists at the time didn’t fully realize all its implications.

“When Ciechanover and Hershko got the Nobel Prize for something important, they had no idea they had discovered an efficacious drug target that inhibits multiple myeloma,” Israel said. “But if they had never done their work, everybody with the disease would still be dying quickly.”

Now there are second- and third-generation drugs based on the same research, such as carfilzomib, a selective proteasome inhibitor given to patients via an intravenous line, and ixazomib, the first oral therapy for multiple myeloma. 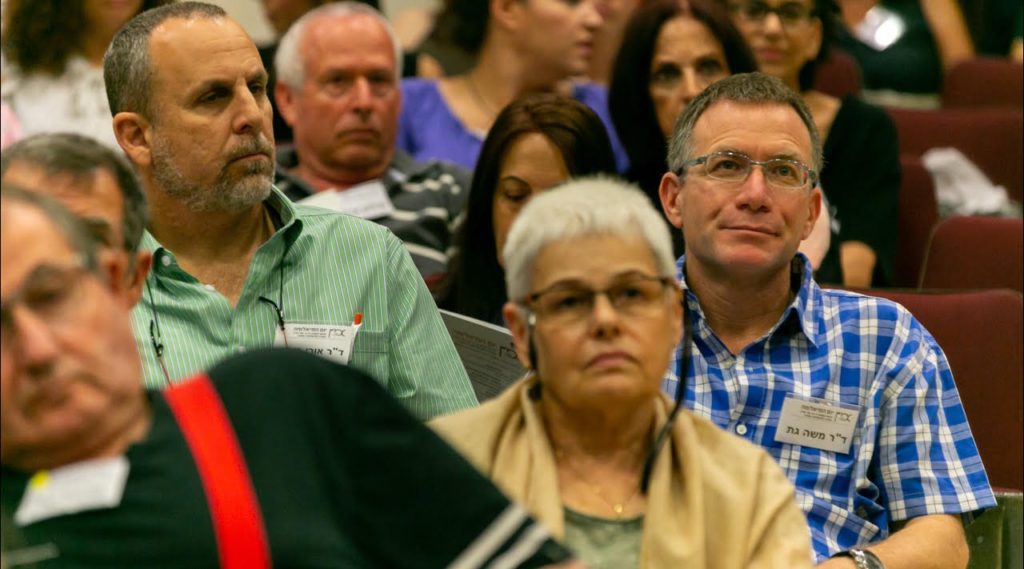 Scientists at the AMEN conference at Tel Aviv University. (Courtesy of AMEN)

A more recent Israeli contribution to treating multiple myeloma was the invention of the CAR-T cell based on early work by Zelig Eshhar of the Weizmann Institute of Science in Rehovot.

“Eshhar’s idea was to take a T cell, modify it genetically by implanting a hybrid receptor that can target the cancer cell and have a second component that activates the T cell to kill the cancer cell,” Cohen said. “This was later developed for the treatment of leukemia and lymphoma, and we are now hoping to open CAR-T clinical trials in Israel to treat multiple myeloma in the next few months.”

Dr. Moshe Gat chairs the Israeli Multiple Myeloma Study Group, a gathering of 20 to 30 physicians who meet every few months to discuss current topics in myeloma. The group runs some joint clinical trials and advocates for better patient care and enhanced access to medication.

“When I was a fellow 15 years ago, the median survival for a patient with multiple myeloma was 2 1/2 years,” Gat said. “Since then it’s nearly quadrupled, and I don’t know what to say to a new patient since so many treatments are coming online.”

About 550 people in Israel are diagnosed with multiple myeloma each year, with some 3,500 patients living with the disease at any given time, according to Norman, who chairs AMEN-The Israeli Association of Myeloma Patients. The nonprofit, founded in 2005, advocates for multiple myeloma patients throughout Israel, including offering support through monthly meetings, empowerment workshops and an active Facebook group with more than 600 members.

“These days, people are living with myeloma much longer than they used to,” Norman said. “Even if they’re diagnosed at the age of 40, they will make it into their 60s.”

The most difficult thing about living with myeloma, Norman said, is the inevitability that her health will take a turn for the worse.

“For now there’s no cure, so even when you’re in remission you know it’s going to come back,” Norman said. “You don’t know when or how, but every physician you ask will say ‘You’re going to relapse.’ We always carry this fear.”

While the median age for a multiple myeloma diagnosis is 70, some patients get it much younger. Norman says it is outdated thinking to view it as a disease of the elderly.

Myeloma is one of the many cancers that the Israel Cancer Research Fund is targeting through research.

“We’re trying to use the best minds in the world to ask the fundamental questions about cancer cells: How do they grow, how do they metastasize, how do they invade normal tissue and ultimately do things which make people sick and die?” said Israel of the ICRF. “We contribute to the fund of knowledge on which cancer interventions are based. This is where the investment really counts.”