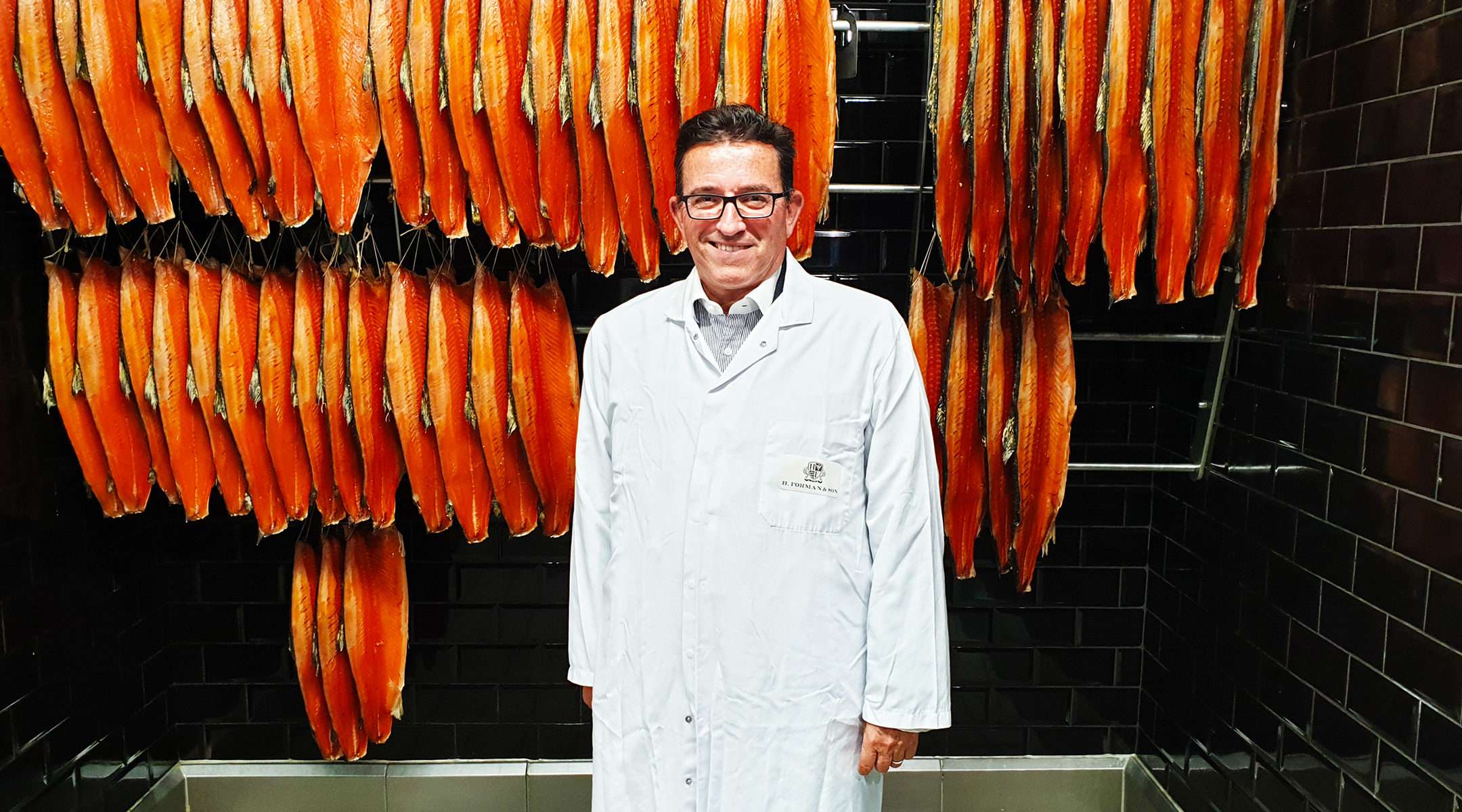 Lance Forman shows off the final product of his smoked salmon factory in the East End of London, Sept. 4, 2019. (Cnaan Liphshiz)
Advertisement

LONDON (JTA) — Twenty years ago, this city’s oldest maker of smoked salmon endured a series of catastrophes that convinced its Jewish owner that his family business was a goner.

In 1999, a fire consumed three-quarters of its factory. A year later, flooding forced it to relocate. A year after that, the factory had to move yet again because its land was seized to make way for the Olympics.

“It was the most awful five years,” said Lance Forman, whose maternal great-grandfather opened the H. Forman & Son factory in 1905 in London’s gritty East End after immigrating from what is now Ukraine.

Each new crisis “could’ve been the end of the road” for the company, said Forman, who now employs about 80 employees and processes about two tons of fish daily. “But we always managed to find the silver lining under the cloud.”

Informed by this experience and his ancestors’ resilience, Forman says he is confident that his business will be able to weather the gathering storm of Brexit. The United Kingdom is set to leave the European Union on Oct. 31 with unknown consequences for its currency, economy and government.

In fact, Forman is an enthusiastic supporter of Brexit. In May, he was elected to the European Parliament for the Brexit Party, the anti-EU party led by Nigel Farage, the provocative British politician who has been criticized for employing anti-Semitic tropes.

One of Forman’s pet peeves is the EU’s penchant for regulation and the problem it creates for small businesses like his. As an example, he cites EU dictates that in 2003 forced him to slap a warning label — “May contain fish” — on transparent packages of smoked salmon at a cost of $20,000 for new packages.

It’s “ridiculous,” Forman said. “If a person who’s allergic to fish doesn’t know that smoked salmon isn’t good for them, then the allergy is the least of their problems.”

Forman has had to change flooring twice as the EU zigzagged on that issue. He is paying about $150,000 each year for refrigeration that he says is unnecessary but nonetheless is required by the EU. Forman believes some of the regulations are promoted by corporate lobbyists intent on knocking out smaller competitors.

In the factory’s small cafeteria hangs a picture of Forman’s father at work in the 1960s proudly holding up a prime filet as three employees smile for the camera. In the background, fish carcasses are seen laid out on the floor along a brick wall.

These humble (and perhaps unhygienic) beginnings stand in stark contrast to the sophisticated processes employed today at Forman & Son, whose London cure smoked salmon in 2017 received a protected geographical indication, or PGI, from the EU — a status indicating that a product’s geographic origin is essential to its unique characteristics. Brexit might result in the loss of that status, but Forman is unfazed, dismissing PGI as just “a marketing element.”

Each day, carts of fresh iced Scottish salmon are processed by a skilled team that takes just minutes to clean, fillet and debone a fish. Company policy is to use fish only within 48 hours of being caught. The fish are then salted and hung to dry in kilns. Salmon fillets being dried in a kiln ahead of smoking at the H. Forman & Son fish factory in London, Sept. 4, 2019. (Cnaan Liphshiz)

They are treated with smoke from sustainably harvested oak wood. The wood is smoked using friction, a method that reduces wood consumption to a mere few blocks a day and allows for precise dosage, preventing the oversmoking effect that can overpower salmon’s natural flavor.

This smoking process was introduced to the East End of London by Jewish immigrants like Forman’s great-grandfather, Aaron, who took on the English name Harry after arriving here in the late 19th century.

To be sure, the Scots also smoke fish, including salmon. But Forman says their drying methods are inferior, resulting in slimier meat. More crucial, at Forman’s they carve up the fish instead of leaving the smoked layer on the outside, sealing off the rest of the fish from bacteria and leaving its natural taste unaltered.

“When British chefs discovered East London smoked salmon, they fell in love with it because all the other smoked fish of the period would leave their taste in your mouth for three hours, meaning you can’t use them as starters,” Forman said.

He still enjoys snacking on his product, which features prominently at the restaurant located inside the slickly designed factory. Forman even named one of the restaurant’s offerings the Boris Bagel after Prime Minister Boris Johnson, a longtime friend and ally who has vowed to advance the Brexit process. 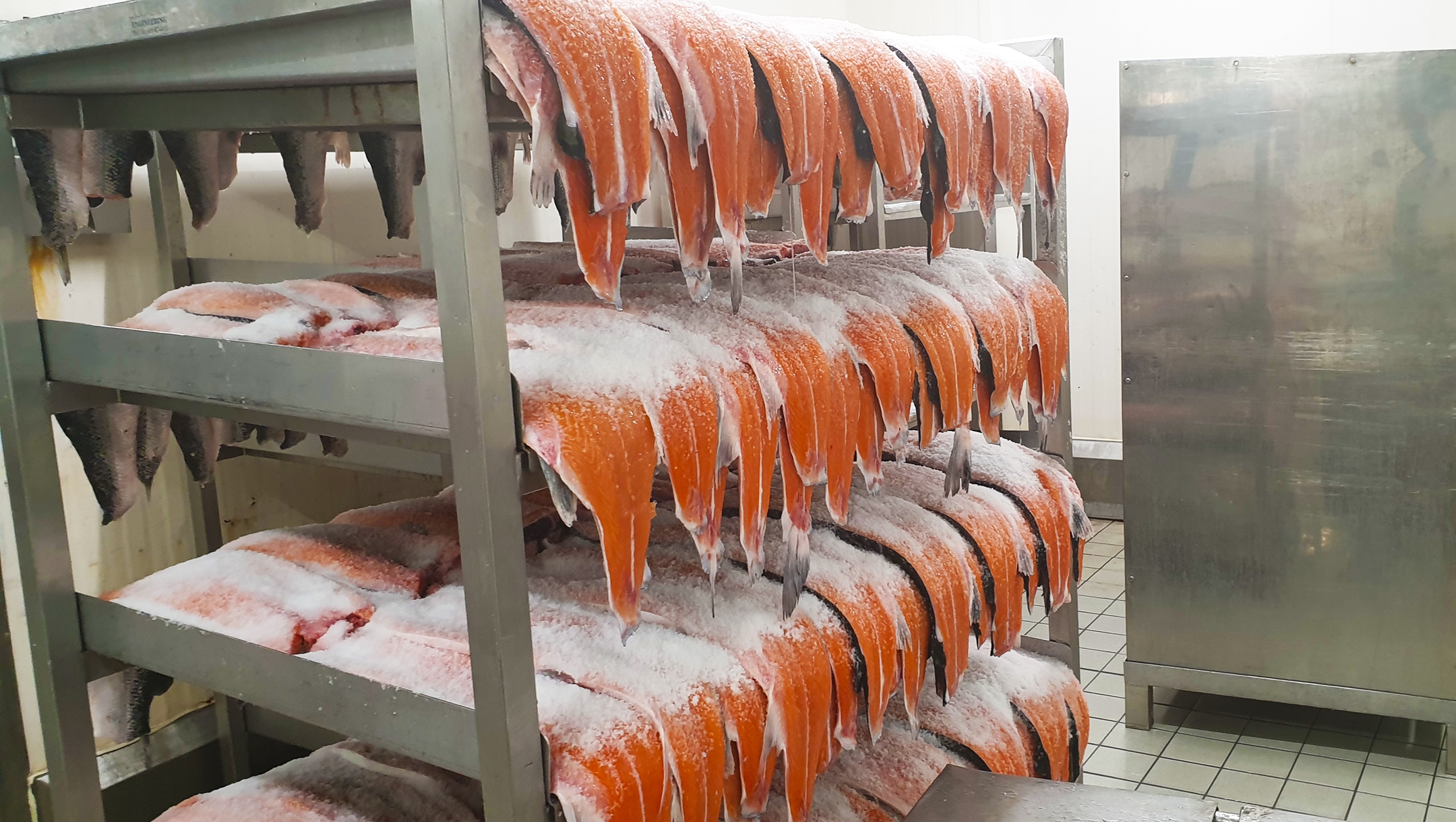 For Forman, the nativist arguments for Brexit — chief among them that EU membership increases immigration at the expense of native Britons — take a distant backseat to the economic ones. He believes the euro will collapse within the next 15 years and, when it does, “EU economies will crash and the United Kingdom will get sucked into the mess, just as it has in the past.”

The point of Brexit is “mostly to show other countries they can leave, so the European Union can be dismantled in a controlled fashion,” Forman said.

Some British Jews with immigrant roots fear that the Brexit project is awakening xenophobic tendencies and triggering hate crimes. In May, Forman’s factory was a target of one when a 30-foot swastika was painted on its facade. Forman says he was targeted not because he’s Jewish but because he supports Brexit. He says he learned that from a woman who called the factory to tell him that that the person responsible for the swastika was a graffiti artist.

Forman also denies that the anti-Semitism accusations against Farage, the Brexit Party chief, have any merit. A former leader of the hard-right UK Independence Party, or UKIP, Farage has regularly inveighed against “globalists” — a term some believe is coded language for Jews. In 2017, Farage said that the “Jewish lobby” in the United States has significant influence despite the fact that the Jewish community is “quite small.” Farage has squarely rejected the charge that those comments are anti-Semitic.

Forman says that Farage left UKIP “because it was getting a bit xenophobic” and, in part, blames the British media for the anti-Semitism controversy, charging that it falsely portrays “UKIP and Brexit as xenophobic projects in what sort of has a tendency of becoming a self-fulfilling prophecy because it consolidates support for these causes among xenophobes.”

Besides, it isn’t hypernationalism that threatens Jews, according to Forman, but postnationalism. The EU, he says, “places national sentiment in a straitjacket, and people will resist. It will collapse and release an ultranationalist backlash.”