Europe is propping up Iranian terror while demonizing Israel 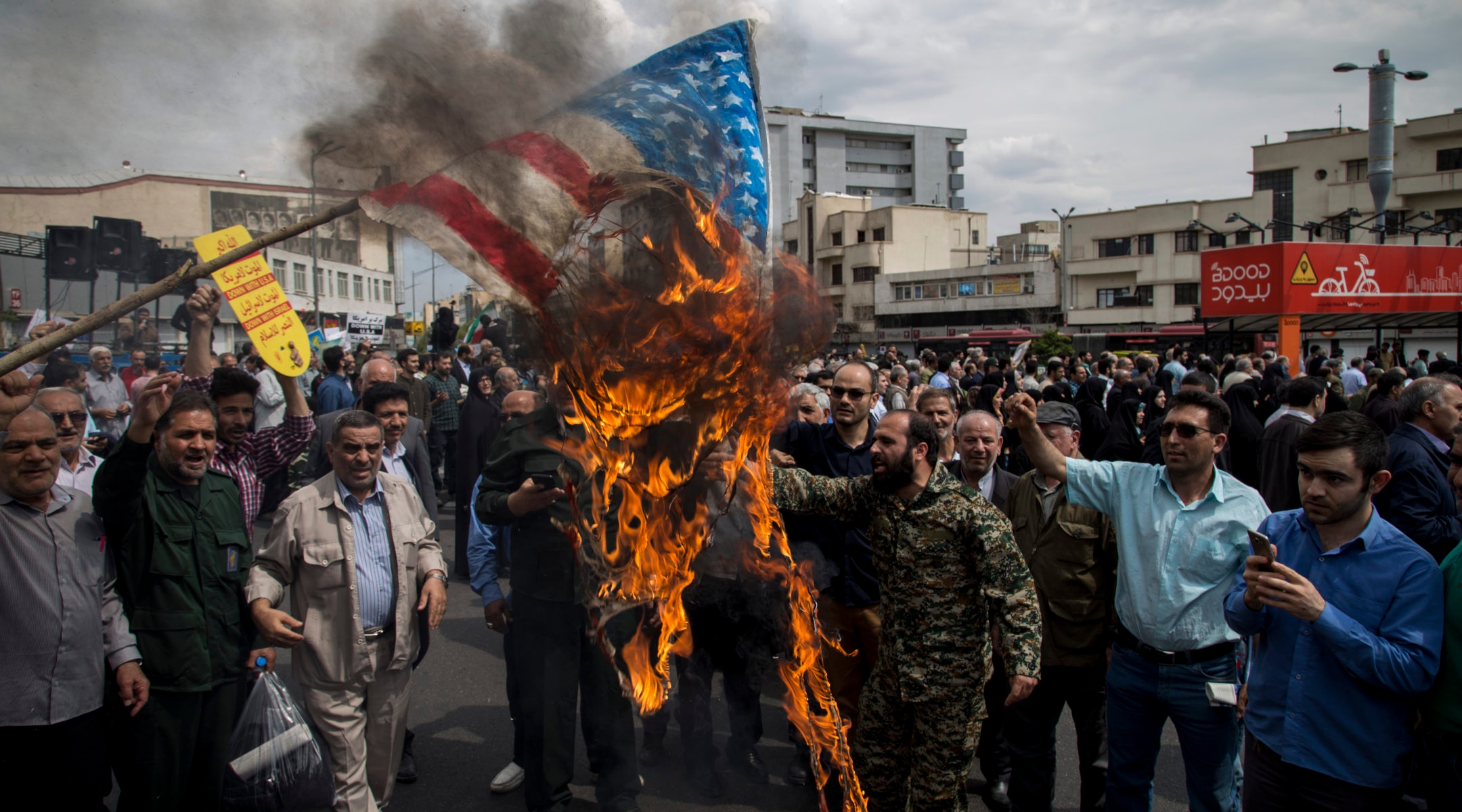 NEW YORK (JTA) — It’s not everyday that a world leader manages to wrestle the attention and agenda from Donald Trump. But at the recent G7 summit in Biarritz, France, French President Emmanuel Macron took center stage (at least for a few moments) with his surprise invitation to Iran’s foreign minister, Jarad Zarif.

Trump has been putting the squeeze on Iran, walking away last year from the 2015 Joint Comprehensive Plan of Action and ratcheting up sanctions on the Islamic Republic. In turn, Macron and other European leaders have been waging a two-front campaign — keep Iran tethered to the nuclear deal long enough to get Trump and the United States back on board.

In addition to the Zarif invitation, French officials this month reportedly proposed a $15 billion letter of credit to compensate Iran for U.S. sanctions and incentivize that country to keep the terms of the 2015 deal.

In order to understand how grievous a mistake this is, Macron just has to follow the money released to Iran since the JCPOA was signed.

The sanctions rollback was designed to aid everyday Iranians,  but the main winner has turned out to be Iran’s terrorist infrastructure. Last year, the Washington Times reported that the U.S. government has “traced some of the $1.7 billion released to Iran by the Obama administration to Iranian-backed terrorists in the two years since the cash was transferred,” including Hezbollah “along with the Quds Force, Iran’s main foreign intelligence and covert action arm and element of the Islamic Revolutionary Guards Corps.” According to U.S. Treasury Under-Secretary for Terrorism and Financial Intelligence Sigal Mandelker, upwards of $700 million a year is going to Hezbollah alone.

This shouldn’t be surprising. The United States, under both Democratic and Republican administrations, has long designated Iran as the world’s leading state sponsor of terrorism, with almost “global reach.” According to Matthew Levitt of the Washington Institute, Hezbollah for years has been “involved in criminal enterprises, including narcotics trafficking and counterfeiting European currency,” and the terrorist organization’s operatives “run one of the largest and most sophisticated global criminal operations in the world.”

Europe hasn’t been spared from Iran’s terror activities. As journalist and author Con Couglin wrote in a piece for the Gatestone Institute, Iran has a “well documented sponsorship of terrorism” in Europe, most infamously the 2012 Burgas bus bombing of a civilian vehicle, killing five and injuring 32.

Yet the Europeans, even before Trump showed up in the White House, longed to get into bed with Iran — for their own economic self interests.

It makes one’s head spin that Germany, France and Britain created and actively promote the Instrument of Trade Exchanges, a financial mechanism that economically benefits Iran, allowing it to continue to support terror. INSTEX, a complex barter system, was created to financially enrich Iran and protect European business from being targeted by American sanctions.

It’s bad enough that European nations are seemingly doing everything they can to help Iran back into the international community’s good graces. Making matters worse, they aren’t cutting the Middle East’s only democracy much slack.

In June, EU’s senior legal adviser, Judge Gerald Hogan, recommended labeling Israeli goods that originate in the disputed West Bank so that consumers in Europe can boycott these goods — a move reminiscent of Europe’s boycotting products from apartheid South Africa.

Hogan isn’t an outlier. Even as they ignore Iran and its proxy’s Holocaust denials, European nations regularly take actions to shine a negative light on Israel, for example through their support of one-sided United Nations Security Council resolutions.

Germany and the rest of Europe claim that the JCPOA mandates financially helping Iran, stating that their other malevolent activities can be independently targeted.

But Europe’s refusal to confront Iran’s missile development, human rights abuses and international support of terrorism is inexcusable. There is nothing ambiguous in the anti-Semitic rantings of Iran’s supreme leader that should allow any European to re-spin Iranian venom into anything but what it is: the absolute desire for the destruction of Israel.

After the 2015 agreement, Iran increased its financial support of Hezbollah from $200 million to $800 million, and the Europeans yawned, maintaining unflinching support for a flawed agreement with a regime whose raison d’etre remains the destruction of Israel. That wouldn’t be tolerated against any other nation in the world.

The Europeans can’t pretend to be bolstering a peaceful Iran while ignoring the leaders’ anti-Semitic words and actions — not to mention support for countless international terrorist attacks — over decades.

If Europe continues to demonize Israel while allowing Hezbollah to fundraise on the continent, all while taking whatever profits it can get by financially and diplomatically supporting the world’s leading state sponsor of terror, then Europe is morally lost — perhaps forever.