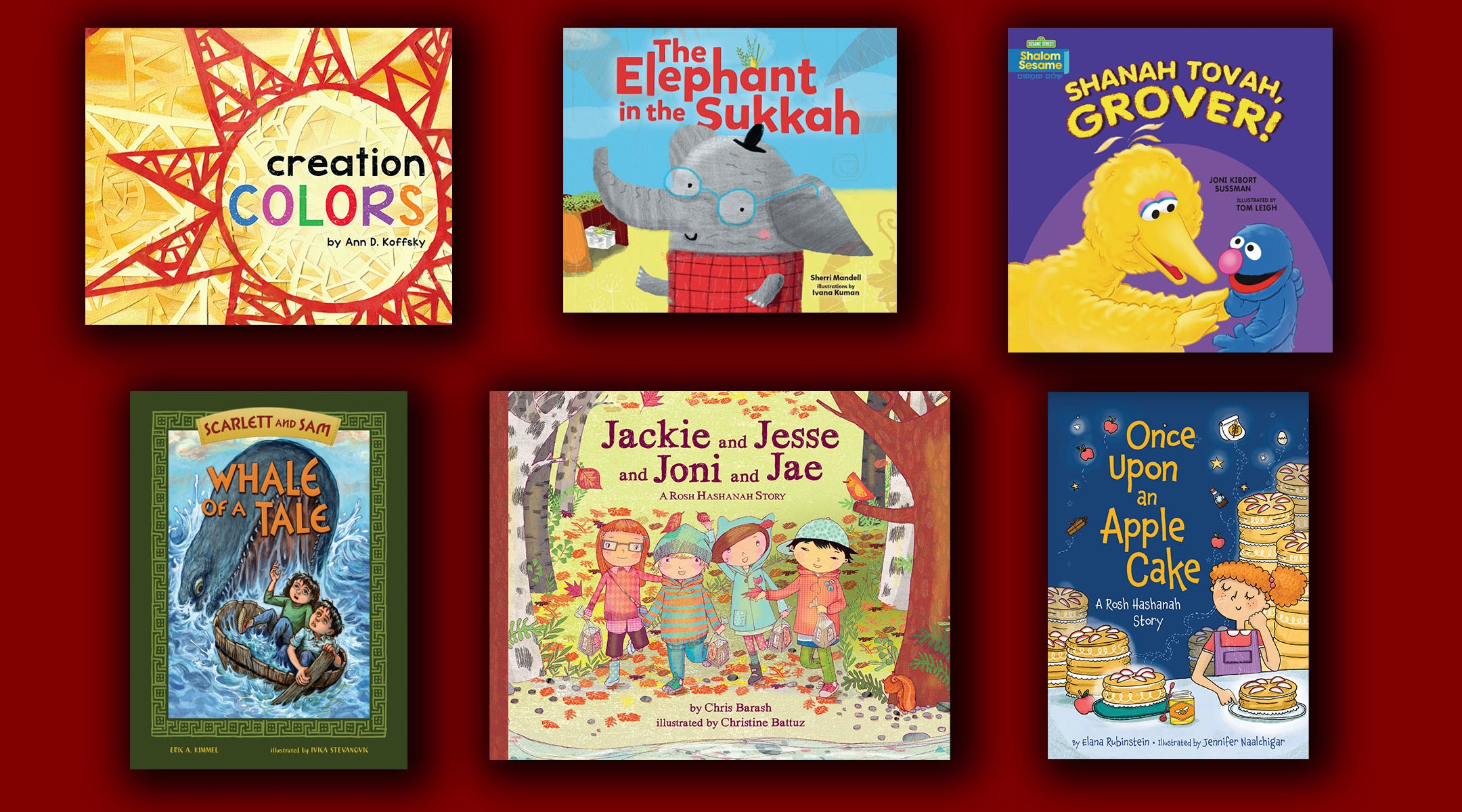 (JTA Montage; photos of the covers come via the books' publishers)
Advertisement

BOSTON (JTA) — A Rosh Hashanah apple cake bake-off fit for reality television and another installment in the Scarlet and Sam series from the award-winning author Eric A. Kimmel are among the highlights in the crop of new High Holiday books for children.

Six engaging and fun reads for kids of all ages seize the spirit of the Jewish holidays and the excitement and anticipation of beginning anew, reflecting on the past, and celebrating the warmth and joy of Jewish traditions with family and friends.

Kimmel’s “Whale of a Tale” provides a modern-day riff on the biblical Book of Jonah read aloud in synagogues on Yom Kippur, preaching forgiveness over revenge. The master storyteller adds his laugh-out-loud wit to this ancient and intriguing story.

In “Once Upon an Apple Cake,” the children’s book debut for author Elana Rubinstein, you get a zany, charming story of the meaning of family and the strength of Jewish tradition. Not to mention a terrific recipe, too.

Other offerings bring the Sesame Street characters led by Grover and a brilliantly colorful biblical story of Creation by another award-winning author, Ann Koffsky. Not to mention for Sukkot, an elephant making his way into a sukkah.

The Jewish New Year begins on the night of Sept. 29.

In this humor-filled, heartwarming chapter book, readers meet Saralee, an endearing 10-year-old Jewish girl whose cute-looking nose possesses the unusual superpower to sniff out scents and flavors. As Rosh Hashanah approaches, Saralee, whose family owns a restaurant, is excited to bake her zayde’s (grandfather in Yiddish) popular apple cake with a mystery ingredient that even Saralee can’t figure out.  Trouble lay ahead when a new family opens a restaurant and threatens to take over the apple cake business.

When zayde bumps his head, he temporarily forgets the secret to the cake. Will Saralee rise to the occasion, bake the perfect cakes and win a contest judged by a famous food critic? More than anything, Saralee wishes that her grandfather returns home from the hospital for Rosh Hashanah.

The cartoon illustrations by Jennifer Naalchigar add zest to Rubinstein’s efforts. The recipe is included at the end of the book.

Whale of a Tale
Eric A. Kimmel; illustrations by Ivica Stevanovic
Kar-Ben; ages 6-10

Travel back in time in the third installment of the Scarlett and Sam Jewish-themed chapter book series for older readers by Kimmel (“Hershel and the Hanukkah Goblins”). The lighthearted adventure begins when the brother and sister twins offer to take their Grandma Mina’s centuries-old carpet to be cleaned at the local rug shop. Engrossed in conversation with their mysterious ride-hailing service driver, Jonah, they forget to take the prized carpet with its aura of magic that their proudly Iran-born grandmother brought with her as she fled tyranny in her country.

Suddenly they find themselves transported to Jaffa in ancient Israel amid carpet sellers in the shouk (market). They stow away on a ship, where they reunite with Jonah, who they learn is the biblical prophet. The stormy caper shines with references to the biblical tale, as the kids and Jonah go overboard and are swallowed up in the slimy belly of a big fish (is it really a prehistoric shark, they fear?). With fierce determination, the clever kids prod the reluctant Jonah to travel to Nineveh, to be faithful to God and justice, and to speak out to the ruthless Assyrian king.

Join Grover, Big Bird and other beloved Sesame Street characters as they welcome Rosh Hashanah with honey and apples, a shofar, and a festive meal with songs and blessings. Joni Sussman’s simple verse is perfect for reading aloud to little ones and for preschoolers eager to read on their own, paired with veteran Sesame Street artist Tom Leigh’s delightful, colorful illustrations.

In this gloriously illustrated picture book of papercut art, Koffsky (“Judah Maccabee Goes to the Doctor”) presents young kids with the biblical story of Creation through the prism of color: from separating light from dark to the bubbling blues of the water, to the yellows of the sun, and the stripes and spots of the animals. After God created the first two people, a world full of people of all shades and hues followed. And then, on the seventh day, God rested.

This simple, lyrically told story is perfect for Simchat Torah, the joyful festival at the end of the High Holidays that anticipates the start of the new cycle of the weekly Torah reading that unfolds with Genesis.

On a crisp fall day, four good friends stroll hand in hand toward the river clutching small bags of sliced bread. The diverse group is following their rabbi and neighbors to tashlich, the custom during Rosh Hashanah of tossing crumbs or other small objects into moving water to symbolically cast away mistakes from the past year. Kids will relate as the friends recall misdeeds, like when Jae shared Jackie’s secret.

Chris Barash’s lovely rhyming verse comes to life in Christine Battuz’s cartoon-like drawings in warm autumn tones of browns, orange and green. On the closing page, the friends are seen from behind, walking home, again hand in hand — a palpable reminder of the power of asking for and extending forgiveness, a theme central to the High Holidays.

The Elephant in the Sukkah
Sherri Mandell; illustrated by Ivana Kuman
Kar-Ben; ages 3-8

Nothing will get between a young boy named Ori and Henry, a lively elephant who once was a circus star but now is sent to a farm for old elephants where no one sings or has fun. When Henry wanders out one evening, he is enchanted by the joyful music and singing he hears from the Brenner’s family sukkah. After a few nights, he even learns the Hebrew words.

Young Ori hears Henry singing along outside the sukkah and is determined to find a way to bring the animal inside to fulfill the mitzvah of welcoming guests. The boy’s surprising solution shines with kid-friendly inventive thinking.

Kids will chuckle at illustrator Ivana Kuman’s double-page spread as Henry, in his red-checkered shirt and small black cap, tries every which way to squeeze into the sukkah. On an author’s page, readers discover that the out-of-the-ordinary idea of elephants in a sukkah crossed the legalistic minds of the Talmud’s rabbis.