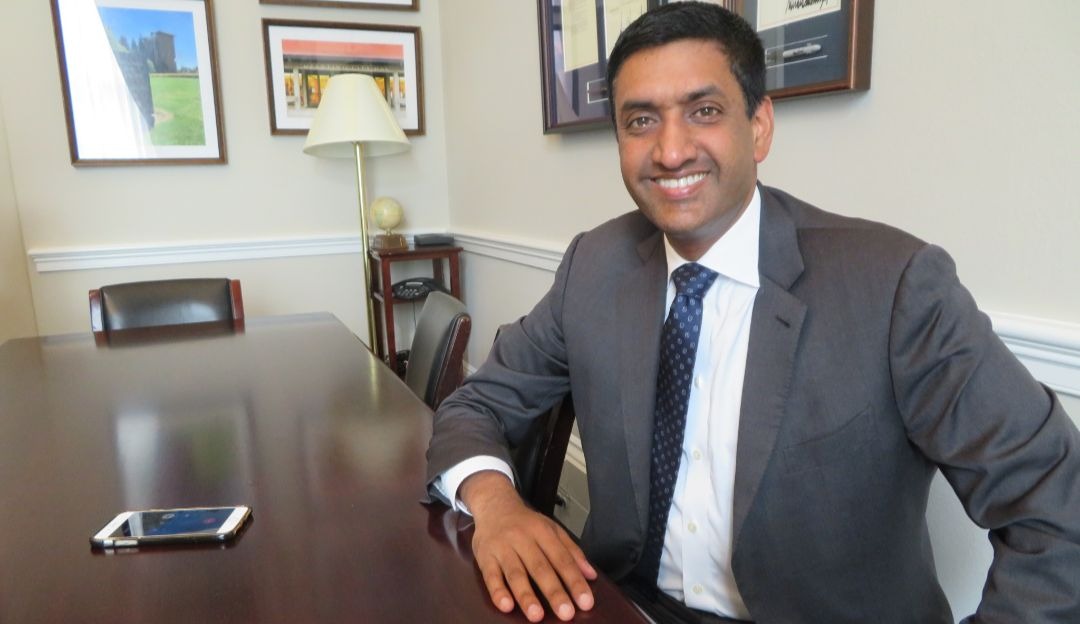 Ro Khanna in his congressional office, Sept. 17, 2019. The California congressman wants close U.S.-Israel ties to continue, but says that should not preclude the American government from using the relationship as leverage to push for changes in Israeli policy. (Ron Kampeas)
Advertisement

WASHINGTON (JTA) — Ro Khanna, a rising star among progressive Democrats, wants to make a point about how to be progressive and pro-Israel, so he quotes Alan Dershowitz.

Yes, that Alan Dershowitz, the Fox News habitue who has accused the Democratic Party of “tolerating anti-Semitism.”

“I don’t agree with all of Professor Dershowitz’s book,” the California congressman said, referring to “The Case for Israel,” Dershowitz’s 2003 effort to advance a liberal argument for Israel. “But where he makes that point about not singling out a country unfairly — you have to stand up for human rights consistently around the world.”

Khanna, 43, whose House district encompasses much of Silicon Valley in Northern California, initiated an interview in his Capitol Hill office with The Jewish Telegraphic Agency.

Here’s the point he wants to make: The United States and Israel have a “deeply intertwined” relationship that ought to continue, but that shouldn’t preclude the American government from using the relationship as leverage to push for changes in Israeli policy.

“The vast majority of the Democratic Party wants this relationship to continue to succeed,” he said, “[but] we want it to succeed on progressive values that bring peace and human rights.”

It’s a fine line to walk as Democrats grapple with accusations — including from within — that the party is drifting away from Israel, and as its progressive wing grows increasingly vocal in its criticism. Republicans, chief among them President Donald Trump, have sought to imprint the party with the stamp of four congresswomen known as “The Squad,” two of whom back the boycott Israel movement: Ilhan Omar of Minnesota and Rashida Tlaib of Michigan. Trump has called the party anti-Semitic.

Yet Khanna, a seasoned Democratic activist and a formidable fundraiser able to tap the deep reserves of wealthy liberals in his district, is intent on establishing his approach to Israel as a valid position within his party’s progressive wing. A senior adviser to the presidential campaign of Sen. Bernie Sanders of Vermont, Khanna is a rising star in the party, having ousted a veteran Democrat, Mike Honda, in 2016.

Born in Philadelphia to Indian immigrants, he has been ensconced in the party’s progressive wing for decades, having campaigned as a University of Chicago student for Barack Obama’s first run for state Senate in 1996. Khanna went on to earn a law degree at Yale and was named by Obama, during his first term, to a top Commerce Department role.

In 2011, Khanna started exploring a congressional run almost as soon as he arrived in Silicon Valley to practice and teach law. In 2016, the year he was elected to Congress, Khanna was among a handful of Democratic candidates who endorsed Sanders’ bid for the party’s presidential nomination.

One of the first things Khanna mentioned in the interview was the close ties between Silicon Valley and Israel’s high-tech sector. In December, he moderated a panel discussion in his district titled “Israel-Silicon Valley Roundtable on Entrepreneurship.” He praised Irwin Federman, a constituent and venture capitalist who has invested in Palestinian businesses in the West Bank.

On Israel issues, Khanna is closer to Squad member Ayanna Pressley of Massachusetts, who similarly represents a district with a large population of wealthy liberal Jews. Khanna and Pressley both voted for a House resolution condemning the Boycott, Divestment and Sanctions movement targeting Israel, and both said they were heeding the sensibilities of their Jewish constituents.

“We each take these votes alone but aim to represent the districts we serve,” Pressley said on Twitter after the vote, responding to Israel-critical leftists who berated her for her vote. On Twitter, Khanna quoted Pressley’s tweet and added: “I believe @AyannaPressley we can work on a progressive agenda for peace on these principles. 1) Halt all settlement growth; 2) Halt Palestinian home demolitions; 3) Ease the terms of the Gaza blockade.”

In the JTA interview, Khanna said it makes sense to heed a minority in determining what constitutes bigotry — to a point. Though he opposes BDS, Khanna like many Democrats opposes bills that would penalize Israel boycotters.

“Every person needs to be very careful with the language and listen to the communities being impacted,” he said. “That doesn’t mean you suppress your political views.”

Khanna declined to name Omar or Tlaib, or to directly address the comments that have drawn fierce criticism from some pro-Israel sources. In addition to backing BDS, both freshman lawmakers have fretted about what they see as excessive pro-Israel influence in terms that critics say are anti-Semitic. Omar has apologized for some of her statements.

Instead, Khanna broadly called for toning down the rhetoric and fostering greater tolerance. He cited the cooperation between Tlaib and Andy Levin, a Jewish progressive representing a Detroit-area district neighboring hers as a model.

“What I would suggest is the Levin-Tlaib peace plan,” he said.

Khanna’s progressive bona fides would seem to repudiate the thesis advanced recently by New York Times columnist Bari Weiss, author of the new book “How to Fight Anti-Semitism,” that leftists focus intently on the Palestinians but ignore the plight of oppressed Muslims elsewhere.

Khanna is co-sponsoring two separate bills that would counter China’s treatment of Uighers, an oppressed Muslim minority in China that Weiss alleges progressives have ignored. And he has called repeatedly for an end to arm sales to Saudi Arabia over its war in Yemen.

“What would be hypocritical for me is not to speak out for the human rights concerns of Palestinians,” he said.

Nonetheless, Khanna is sensitive to how pro-Israel Americans feel singled out, especially on college campuses.

“I’ve had students and their parents saying they’re uncomfortable about going to Hillel or being open about their faith,” he said. “Just like I think we shouldn’t penalize boycotts, or speaking about Palestinian rights, we have to have equal respect for people who are practicing Jews or supportive of the U.S.-Israel relationship.”

Khanna said his views hew close to younger Jewish Democrats in favoring a close U.S. relationship with “progressive values.” Just as young Indian Americans like himself favor relations with India but long for peace with Pakistan, Jewish Democrats of his generation support the relationship with Israel but long for peace with the Palestinians. The political action committee affiliated with J Street, the liberal Israel lobby that supports a two-state solution to the Israeli-Palestinian conflict, has endorsed Khanna.

In an aside, Khanna said his brother was married in a Hindu-Jewish ceremony, noting that a combined chuppah-mandap (the wedding tent used by Hindus) is increasingly common.

“You can buy them online,” he said.

Khanna backed a bill this year to consolidate U.S. defense aid to Israel at about $3.8 billion per year, but he also favors leveraging U.S. aid as a means of pressuring Israel to end Palestinian home demolitions, release imprisoned Palestinian minors and stop settlement building. During the interview, he whipped out his smartphone and Googled instances of presidents (Eisenhower, Carter, Reagan, Bush Sr., Obama) who had used American assistance to extract concessions from Israel on territory or other issues.

Khanna, who is gathering signatures for a letter calling on Israel to stop the demolitions in the West Bank, declined to go into specifics about what aid he would favor using as leverage.

“I support continued aid to Israel,” Khanna said, “but the American president has a whole range of options.”