NEW YORK (JTA) — It was a blunt statement in the midst of a cordial conversation: “I’m wondering why you’re here.”

That was Nina Totenberg, the NPR legal affairs correspondent, to Supreme Court Justice Ruth Bader Ginsburg at Thursday night’s Moment magazine awards dinner, where the justice had just walked out to a standing ovation.

Ginsburg, 86, is aware that she has been out and about just after completing radiation therapy during her latest bout with cancer, and she answered the question gracefully.

“This latest has been my fourth cancer bout,” she said. “And I found each time that when I’m active, I’m much better than if I’m just lying about and feeling sorry for myself. It’s necessary — a necessity — to get up and go. It’s stimulating. And somehow, in all of these appearances I’ve had since the end of August, whatever my temporary disability is, it stops, and I’m OK for the time of the event.”

The longtime justice held up throughout the entire evening, where she was the inaugural recipient of the Jewish magazine’s Human Rights Award. But Ginsburg didn’t shy away from talking about her retirement with Totenberg, her “favorite interviewer.”

When Totenberg asked if Ginsburg had any regrets about not stepping down during the Obama administration, shocked whispers rippled throughout the crowd.

“It has been suggested by more than one commentator, including some law professors, that I should’ve stepped down during President Obama’s second term. When that suggestion is made I ask the question: Who do you think the president could nominate that could get through the Republican Senate that you would prefer to have on the court than me?” Ginsburg replied to loud applause.

The justice also spoke candidly about her Jewish heritage.

“Neither one of us is a person who goes to temple every Saturday,” Totenberg observed. “But you are a very, I think it’s fair to say, faithful Jew.”

Ginsburg replied, “Some of my most treasured moments growing up were of my mother lighting the candles on Friday nights. I love Passover because we would change the dishes, and I wish we could use the Passover dishes year round.”

Ginsburg went on to speak about sitting shiva for her mother, Celia, who passed away when she was in high school.

“The house was filled with women, but only men could recite the Mourner’s Kaddish. I thought that was wrong,” she said.

The duo then went on to discuss how the Supreme Court used to be in session during the Jewish High Holidays, Rosh Hashanah and Yom Kippur. Ginsburg, of course, changed that tradition.

“The chief [justice’s] first response was, ‘Well, we confer on Good Friday. So why can’t we sit on Yom Kippur?’ And I was trying to think of an argument that would appeal to him, and I came up with a winner,” Ginsburg said to a large laugh.

Her argument? For the Jewish lawyers who had come into town, it was their once-in-a-lifetime moment to argue on the Supreme Court.

(Two years ago, she was a surprise Rosh Hashanah visitor at a D.C. synagogue.) 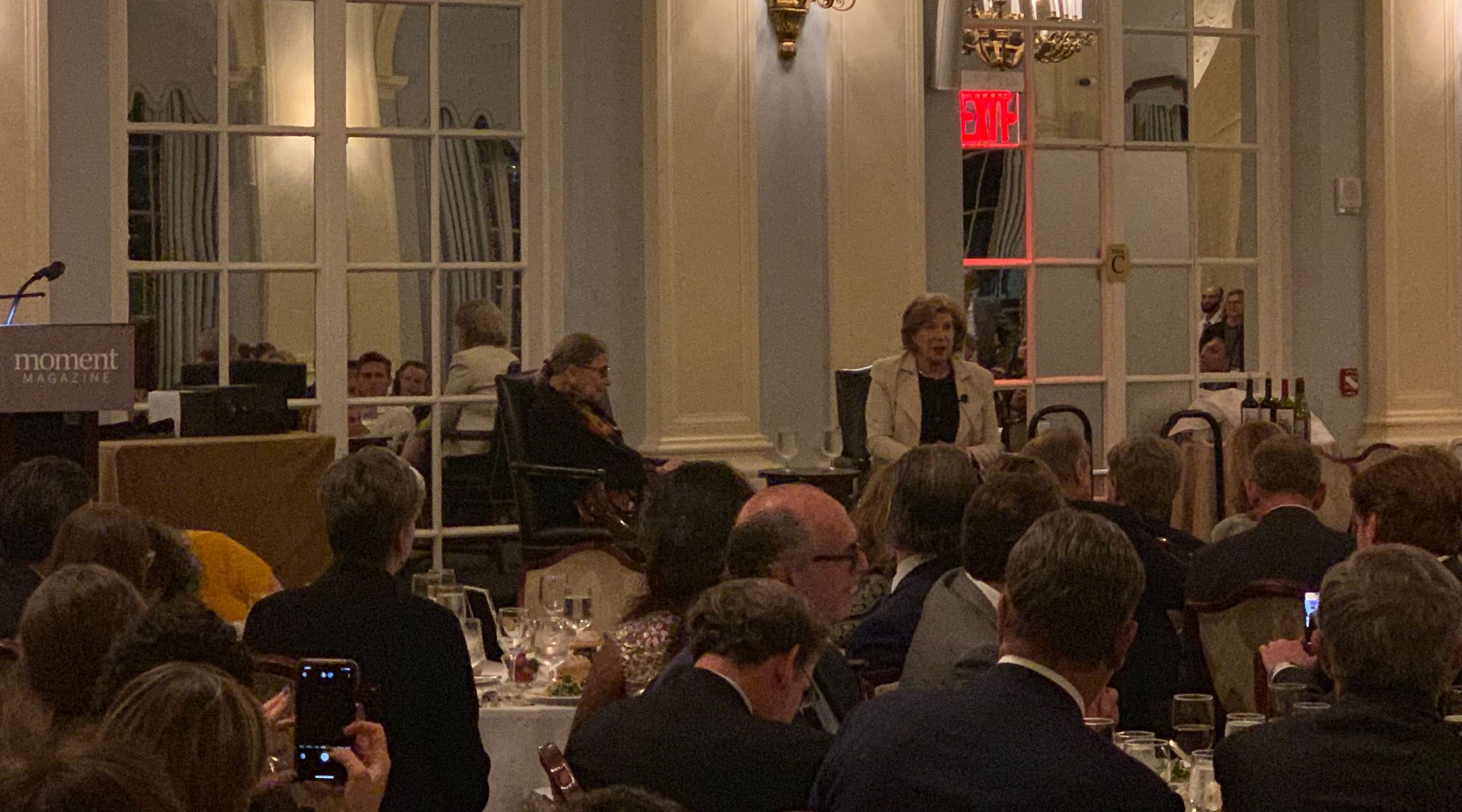 In her acceptance speech later in the evening, Ginsburg began, “I know that good fortune, ‘mazel,’ accounts in large part for the success of my effort to achieve equal citizenship stature for women, and also for the office I have now held for more than 26 years. And, most recently, for the Notorious RBG.”

Her speech also addressed the question of role models. She pointed to two Jewish women who were both raised in the U.S., “whose humanity and bravery inspired me.”

“Emma Lazarus was a Zionist before that word came into vogue. Her love for humankind, and especially for her people, is evident in all her writings,” Ginsburg said about Lazarus. “Her poem ‘The New Colossus,’ etched on the base of the Statue of Liberty, has welcomed legions of immigrants, including my father and grandparents — people seeking in the USA shelter from fear and long-fought freedom from intolerance.”

The other role model she discussed was Hadassah founder Henrietta Szold.

“My mother spoke of her glowingly. Szold, too, was a Zionist — even before Theodor Herzl came on the scene. Among her many undertakings, she started night schools to teach English and trades to waves of Jewish immigrants coming from Russia and other Eastern European countries,” Ginsburg explained. “My father, born near Odessa, arrived in New York in 1909 at age 13. He was the beneficiary of a night school.”

She then went to tell an anecdote about Szold declining the offer of a male friend to say Kaddish for Szold’s mother. In Jewish law, men traditionally say the prayer daily for a loved one who has passed away. Ginsburg quoted the entirety of a 1916 letter that Szold wrote, which displayed her passion for her Jewish heritage and for feminism:

“You will wonder, then, that I cannot accept your offer. Perhaps it would be best for me not to try to explain to you in writing, but to wait until I see you to tell you why it is so. I know well, and appreciate what you say about, the Jewish custom; and Jewish custom is very dear and sacred to me. And yet I cannot ask you to say Kaddish after my mother. The Kaddish means to me that the survivor publicly and markedly manifests his wish and intention to assume the relation to the Jewish community which his parent had, and that so the chain of tradition remains unbroken from generation to generation, each adding its own link. You can do that for the generations of your family, I must do that for the generations of my family.”

Ginsburg wrapped up her remarks by referring back to an older statement she gave on her own heritage as a Jew and her occupation as a judge.

“I am a judge, born, raised and proud of being a Jew,” she said. “The demand for justice, for peace, for enlightenment, runs through the entirety of the Jewish history and Jewish tradition. I hope that in all the years I have the good fortune to continue serving on the bench of the Supreme Court of the United States, I will have the strength and courage to remain steadfast in service of that demand.”