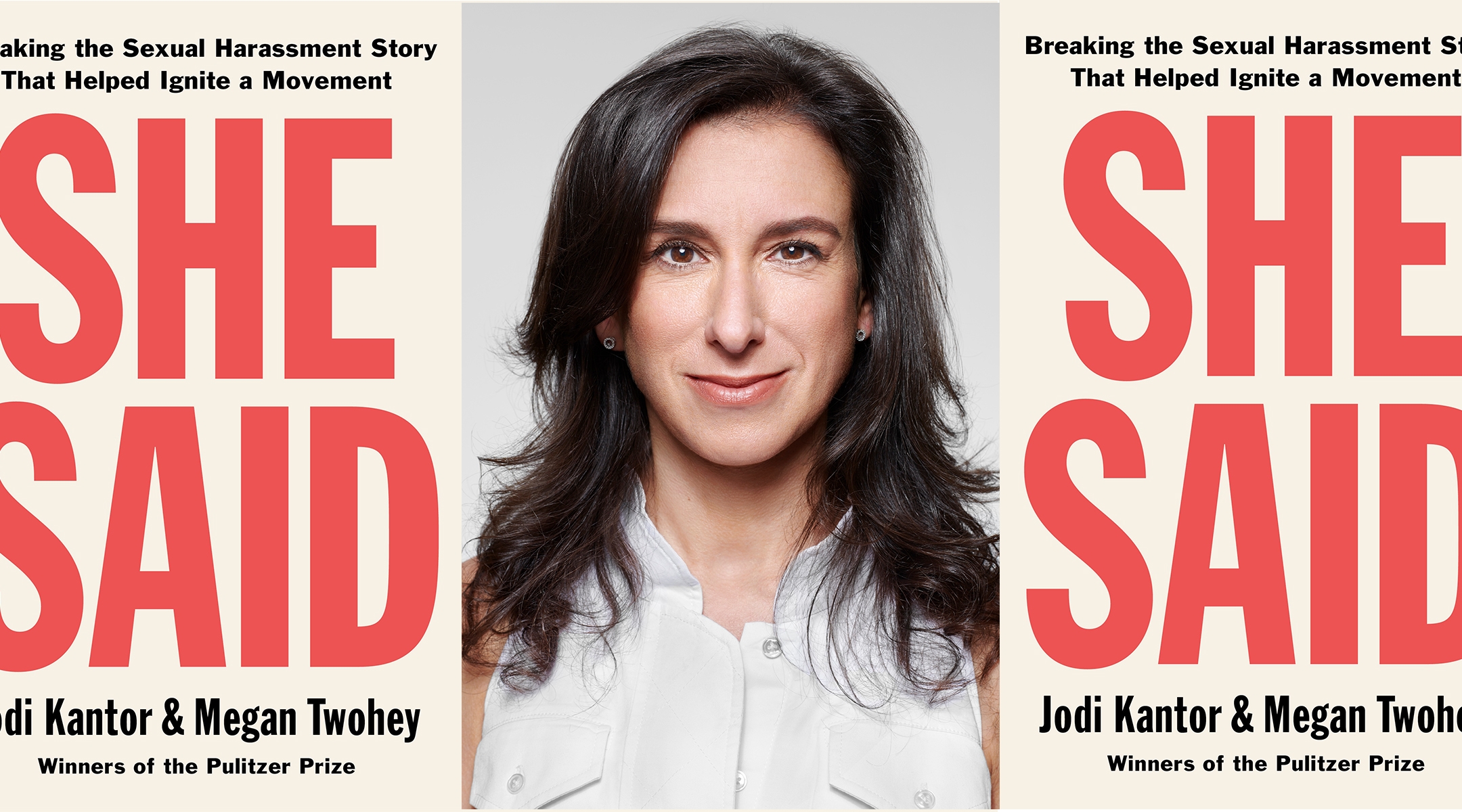 Jodi Kantor's new book "She Said," written with her New York Times colleague Megan Twohey, gives readers an inside look at the reporting of the Harvey Weinstein story and others integral to the #MeToo movement. (Martin Schoeller/70 Faces Media Montage)
Advertisement

Even though the activist Tarana Burke coined the concept of MeToo in 2006, the reporting by Kantor and Twohey about Weinstein helped transform it into a global movement. Their new book, “She Said: Breaking the Sexual Harassment Story That Helped Ignite a Movement,” reaches back into early 2017 and details how they reported out the Weinstein story.

They purposefully included many original documents — including a memo that the feminist lawyer Lisa Bloom wrote about the ways she was going to manipulate on Weinstein’s behalf, and texts between Kavanaugh accuser Dr. Christine Blasey Ford and her lawyers — so, as Kantor explained to the Jewish Telegraphic Agency, “readers have the ability to examine this for themselves.”

Kantor spoke with JTA about “She Said,” Harvey Weinstein and what it means to her that the anniversary of the story’s publication coincides with the holiest day of the Jewish year.

JTA: We’re having this conversation the day before Yom Kippur, a Jewish holiday all about atonement. Do you think it’s possible for someone to atone for sexual assault? For people to forgive?

Kantor: I just want to answer it a little bit of a different way because I’m not a rabbi, but I am a journalist. It’s also almost two years to the day since we broke the Weinstein story, and Yom Kippur that year was just a few days before publication. And I remember just being completely overcome by how strong the High Holiday themes were in the story. Because there was so much about reckoning, and what happened in the past, and sin, and whether that could ever be redeemed or compensated. And then, after publication, it turned into a collective reckoning.

Yom Kippur this year coincides with the third anniversary of the Access Hollywood tape leaking, the second anniversary of the publication of the Weinstein story and the first anniversary of Christine Blasey Ford’s testimony. It just leads to these collective questions of how, together, are we going to resolve all these issues as constructively as possible.

Do you think anything has changed in those two years?

Part of what’s so confounding is that everything has changed and nothing has changed. And that’s part of why we wrote the book — we did it to bring you behind the scenes of these events and bring you to ground zero. People have developed such powerful feelings about #MeToo. This book was an invitation to come with us, to join our partnership and to come understand these events as they transpired. We’re bringing you into these first hushed phone calls with actresses as they began to tell us Weinstein stories. You’ll meet the Deep Throat of the Weinstein investigation, an accountant who worked for Weinstein for 30 years who gave us critical information. You’ll be there in the room as Christine Blasey Ford is preparing her testimony with her lawyers.

You and Megan were in the news recently about an interview with Bob Woodward at Sixth & I, a D.C. synagogue that became heated. What happened?

We understood the audience’s concerns, but we were also really grateful to Woodward for volunteering to moderate the evening. Even some of the questions that caused controversy still gave us a chance to explain things, to share things that we thought really important. Megan and I have faced much worse than a fumbling question or two, and we don’t want anyone to stop asking questions or bow out of the conversation for fear that they’re going to say the wrong thing.

Every question is an opportunity to talk about #MeToo. These topics are messy, and they are controversial, so even if a question comes out a little awkwardly, that’s fine. Because we want people, and especially men, to remain in the conversation, and we want them to keep asking.

I love that “She Said” also includes stories of women who didn’t speak out. In the introduction, you write that “we write about those who did speak out, along with other women who chose not to, and the nuances of how and when and why.” Can you expand on this?

Many women were actually barred from talking about their own experiences because of secret settlements and money they’d accepted. Others chose not to come forward, and “She Said” explores why. And then, towards the end, we describe Christine Blasey Ford, who has the most complicated “she said” story we’ve ever encountered, in terms of what she did and did not want to say publicly at various stages leading up to that unforgettable testimony.

Has your Jewishness influenced your reporting, and has reporting on #MeToo impacted you personally?

I don’t write about being Jewish, but in terms of personal background, it’s been hugely influential. My grandparents are Holocaust survivors, my grandmother is still alive — she is turning 96. I grew up believing in the power of stories. I grew up around a lot of traumatized people, a lot of people with numbers on their arms, and a sense that some people were willing to talk about the worst things that had happened and others weren’t. If you spend a lot of time with survivors, you feel that difference [with regard to] who is willing to talk about their experiences and who isn’t. That is something I was aware of from a really early age.

Even though it took me a long time to became an investigative journalist, in retrospect, I grew up steeped in the questions of investigative journalism. Meaning, how could something like this have happened? Who helped? Why didn’t anybody intervene? How did it work? What really happened? Are the victims willing to share their experiences? Those really pervaded my childhood.

The biggest impact of the reporting has been to really affirm this idea that facts can drive social change. You can’t solve a problem you can’t see. Even many of us who thought we knew something about gender in this country had no idea the extent of what women had endured inside the workplace and beyond.

I found it really moving that you and Megan use the statement “I can’t change what happened to you in the past, but together we may be able to use your experience to help protect other people” to encourage women to share their stories. Why does this opening work?

That line was something Megan had formulated during many years of reporting sex crimes. When she first shared that line with me on the phone, she was still on maternity leave and we were not yet working together. It really clicked with me because I thought that is the best reason to talk to a journalist.

A lot of “She Said” dives into the “complicitness” of the people who surrounded Weinstein in his abuse for so long. Is there anything that surprised you the most while writing it?

That whole theme of who helped and who hindered was really surprising to us. We never could’ve guessed that Lisa Bloom, this super feminist celebrity attorney, was in fact going to cross lines and help Weinstein. We never could’ve suspected that her mother, an even more feminist attorney, had done settlements with victims of Weinstein, [Bill] O’Reilly, [Larry] Nassar — helping to conceal the problem. We certainly never could’ve guessed that Gwyneth Paltrow would’ve become one of our most valuable sources, helping so avidly behind the scenes in the investigation. She had been Weinstein’s biggest star. I think that the question of what people’s public faces are, and what their private faces are, and how each of them acted in relation to Weinstein’s alleged misdeeds is really surprising.

Did Weinstein’s Jewishness come up at all? Did it impact anything throughout the story?

I know the Weinstein, and also the Jeffery Epstein stories, are very embarrassing to Jews. But I think people should take comfort in knowing that this is just universal.

The New York Times has looked into Silicon Valley and academia and restaurant workers and factories and all of these different fields, and one thing we saw for sure was that this problem is not specific to any group or background. Bill Cosby, Larry Nassar, Harvey Weinstein … it just ranges across fields.

What conversation do you hope arises out of “She Said”? What do you hope readers take away?

I hope readers see it as an X-ray into power and a chance to ask the big questions about how power works. Not just in the Weinstein story, but in our own lives. If you hear a rumor about something going wrong in the workplace, do you intervene or not? That’s something that all of us face.

This interview has been edited and condensed for brevity and clarity.

A private investigator observed a Cleveland-area synagogue during the High Holidays. Its worshippers are outraged