Squeezed for burial space, Jerusalem prepares to open an underground city of the dead 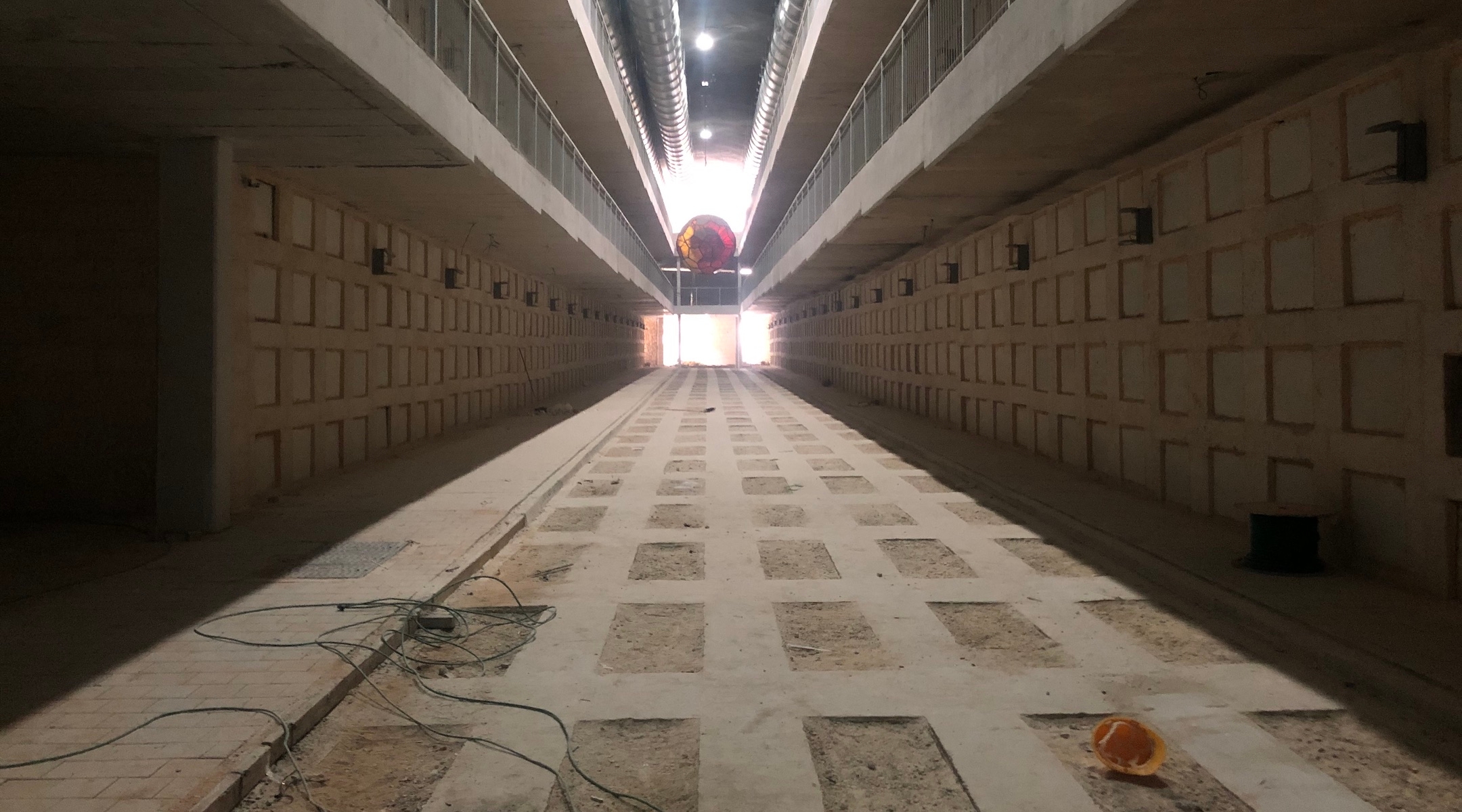 A new tunnel network will ultimately hold some 23,000 bodies and is expected to be filled within a decade. (Sam Sokol)
Advertisement

JERUSALEM (JTA) — Carved into the rock on the side of a mountain directly under the Har HaMenuchot cemetery here lies the entrance to Jerusalem’s newest necropolis, a city of the dead that its designers hope will relieve a shortage of burial space in the capital.

A local engineering firm and Jerusalem’s largest burial society have devised a plan to radically change how Jerusalemites dispose of their dead by building a modern system of burial caves, a throwback to a practice discontinued some two millennia ago.

During the Second Temple period, it was common to briefly inter bodies in caves and after a time rebury the bones in niches carved in tunnel walls. Rolzur Tunneling and the Chevra Kadisha Kehilat Yerushalayim don’t plan to revive the exhumation part, but they are carving crypts again in tunnels. The partners expect to soon open the first section of a massive underground complex that they claim will eventually hold more than 20,000 bodies. 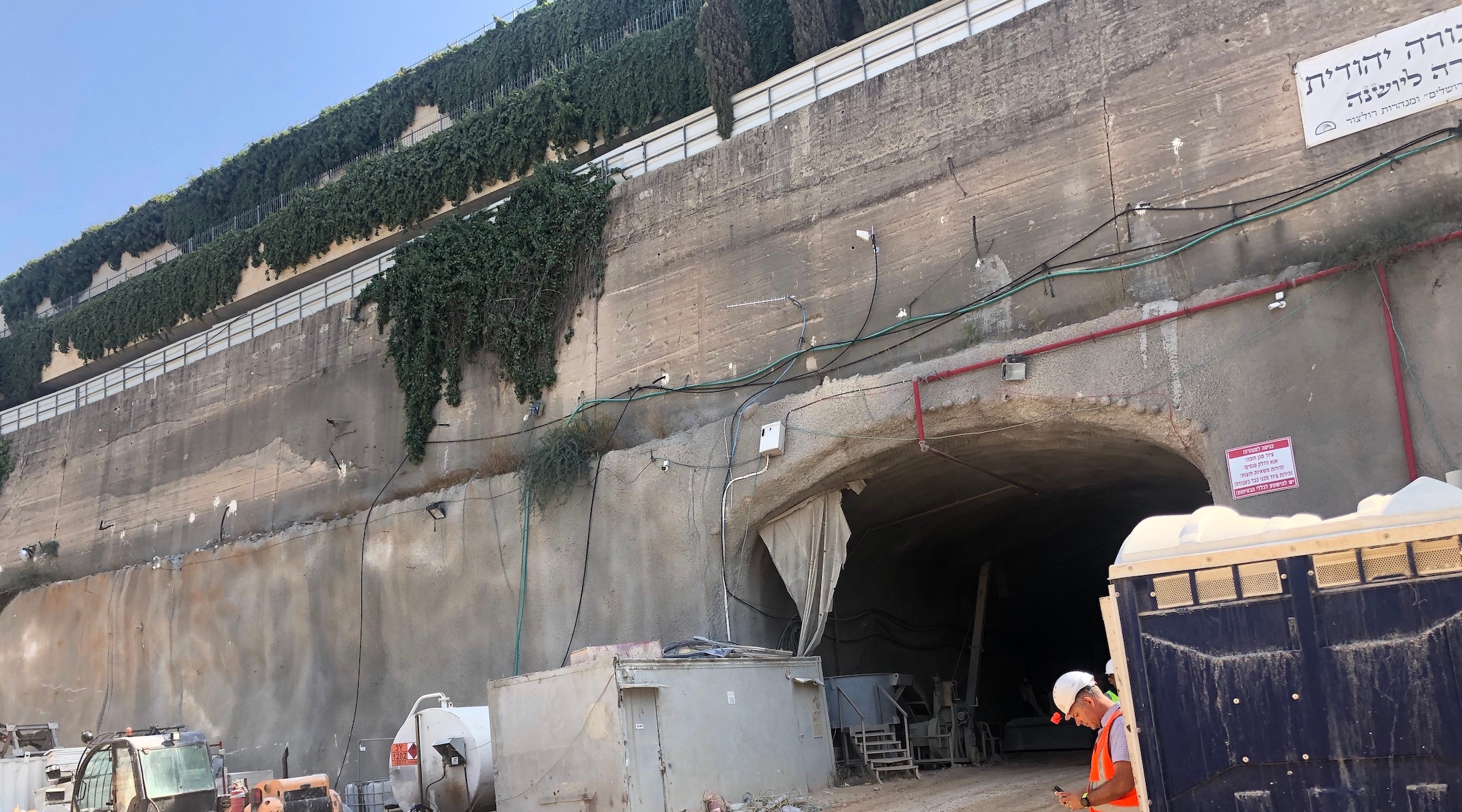 The entrance to the necropolis sits under the existing Har Hamenuchot cemetery. (Sam Sokol)

“The cemeteries will grow and grow, and this will be at the cost of the living,” Rabbi Hananya Shahor, the executive director of Kehilat Yerushalayim, told the Jewish Telegraphic Agency. “In a few hundred years, we won’t have space to live here. And if so, something is wrong with the system. So we started thinking about making the size of the cemetery as small as possible because we need the surface to live.”

Jerusalem’s burial crunch is driven by a growing population, increasing urban density and high demand for burial in Judaism’s holiest city. At Har Hamenuchot, located at the western entrance to the city, the dead already are buried in multi-tiered structures rising several stories above the hills and dominating the approach from Tel Aviv. The structures have alleviated the problem somewhat, but they are expensive to build and still take up a considerable amount of space above ground.

“The outer part of the globe is very full and there is not much space to stretch,” said Adi Alphandary, Rolzur’s chief of business development. “But you only have to go below [ground] and there is a whole world waiting for you.”

Without the tunnel project, Alphandary said, Jerusalem is “doomed” to become a graveyard.

Upon its completion later this month, the $77 million design will incorporate multiple connected tunnels beneath the existing cemetery, each with burial plots carved into rock several stories high. Visitors will take elevators down to graves located in air-conditioned tunnels as deep as 160 feet below ground. Automated systems will keep electrical use to a minimum. An app to enable mourners to easily find their loved ones is also in the works. 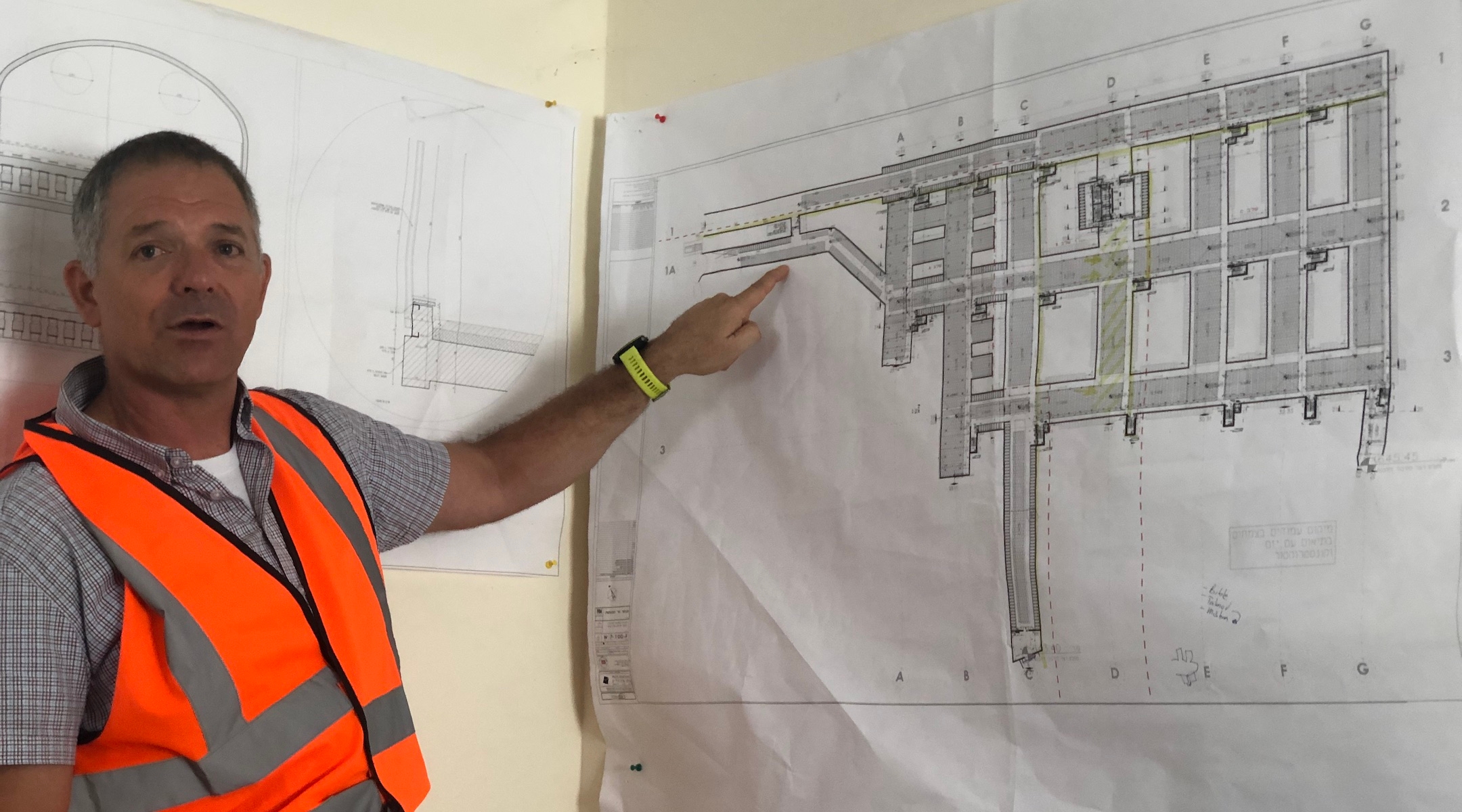 Adi Alphandary of Rolzur Tunneling points to architectural plans for the Jerusalem necropolis that will open soon. (Sam Sokol)

While the unfinished tunnels emit an undeniable horror movie vibe, those that are complete feel more like a public concourse than a graveyard. The walls are lined with Jerusalem stone and the floors are brightly lit. Large glass lighting fixtures, created by an artist in Germany, create an upscale aesthetic.

Alphandary said the tunnel system in many ways is more similar to a skyscraper than a traditional cemetery.

“What you will see is a massive technology and engineering project, but we joke that our blueprints were written in the days of the Mishna and Gemara,” he said, referring to ancient Jewish texts dating to the early centuries of the Common Era.

The tunnels were dug from the top down using special drilling machines that carved out burial niches on the walls. Controlled explosions and heavy equipment were used to lower the floor to make room for more niches. Bodies will be interred both in the floor and on multiple levels along the walls. In parts of the tunnel system where the rock could not handle the excavation of holes in the walls, crypts have been fabricated out of heavy duty polystyrene. 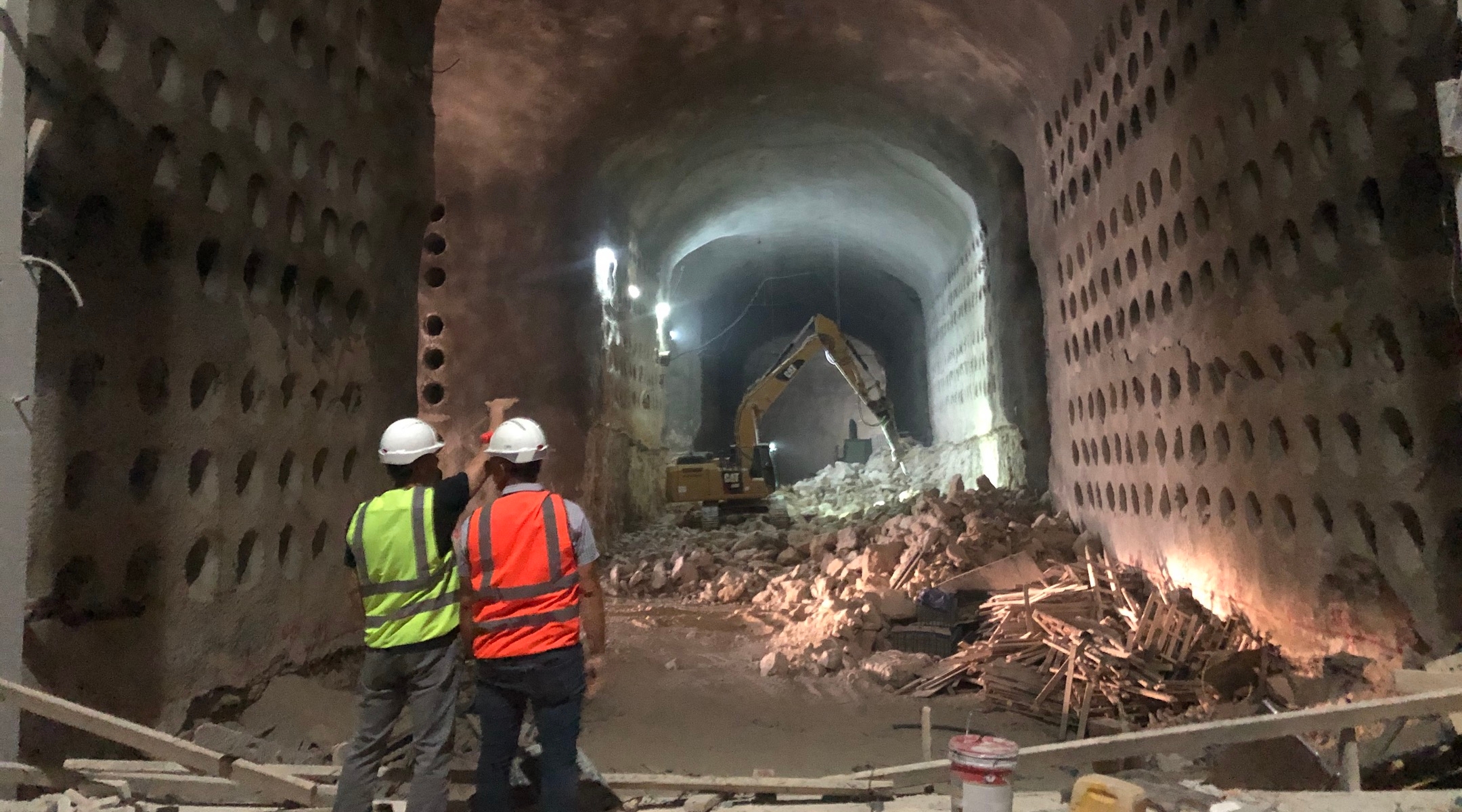 The dead will be placed in burial niches several stories high along the sides of the massive tunnels under the Har Hamenuchot cemetery. (Sam Sokol)

Despite the high cost of construction, Alphandary believes the cost of burial should still be competitive.

“There will be no maintenance for the graves themselves, no weather, no wind or snow,” he said. “On the other hand, there will be electricity. But in order to minimize the amount needed, we are using smart city tech like automated ventilation and lights.”

The tunnels may also be more convenient for mourners. Rather than walk across uneven ground, mourners can take an elevator and then move across a smooth tunnel surface to a grave.

“A man in a wheelchair can easily visit relatives,” Alphandary said. “There will be real climate control as well. It won’t be so hot that people faint.”

The entire facility will have a capacity of 23,000 graves spread out over about a mile of tunnels. At current rates, the structure is expected to be filled within a decade, which has led some critics to question whether it’s worth it. 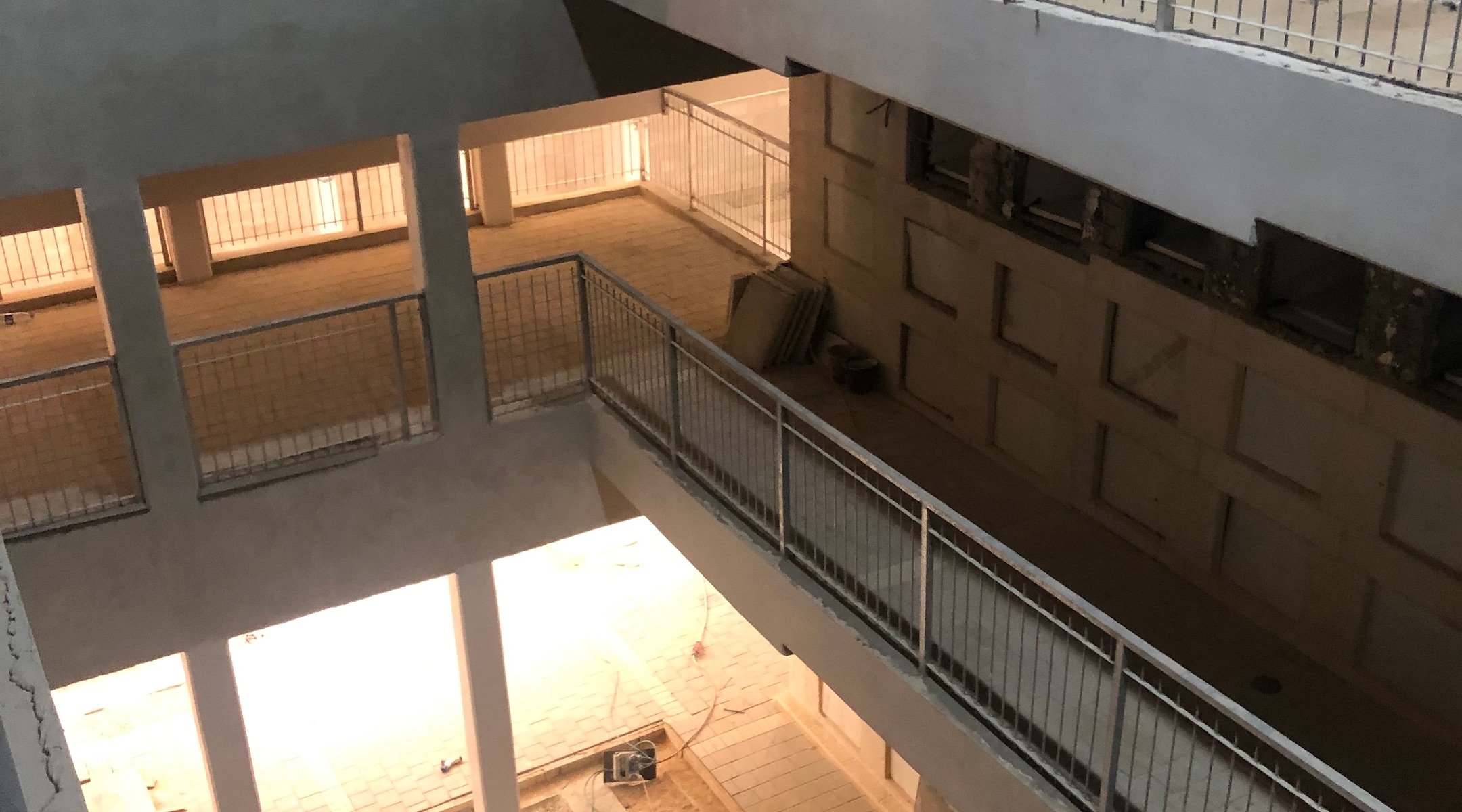 When completed, multiple elevators will take mourners down into the tunnels. (Sam Sokol)

Rabbi Seth Farber, the founder of Itim, an advocacy group that works to help Israelis navigate the country’s religious bureaucracy, said the project only solves the problem for a few years. Instead, he said, Israelis should get past the idea that burial grounds must be in cities.

“I think we should build in the Negev and have public transportation and solve the problem for the next 100, 150 years,” Farber said, referring to Israel’s large and mostly unpopulated southern desert.

“In Haifa they built a cemetery outside of the city and the residents are paying a lot to have burials in the city,” he said.

“Once all the areas around the city are filled, the government will decide where the next place will be. If it’s in Beersheba, someone will have to take a day off work to visit a grave. This will harm the people.”