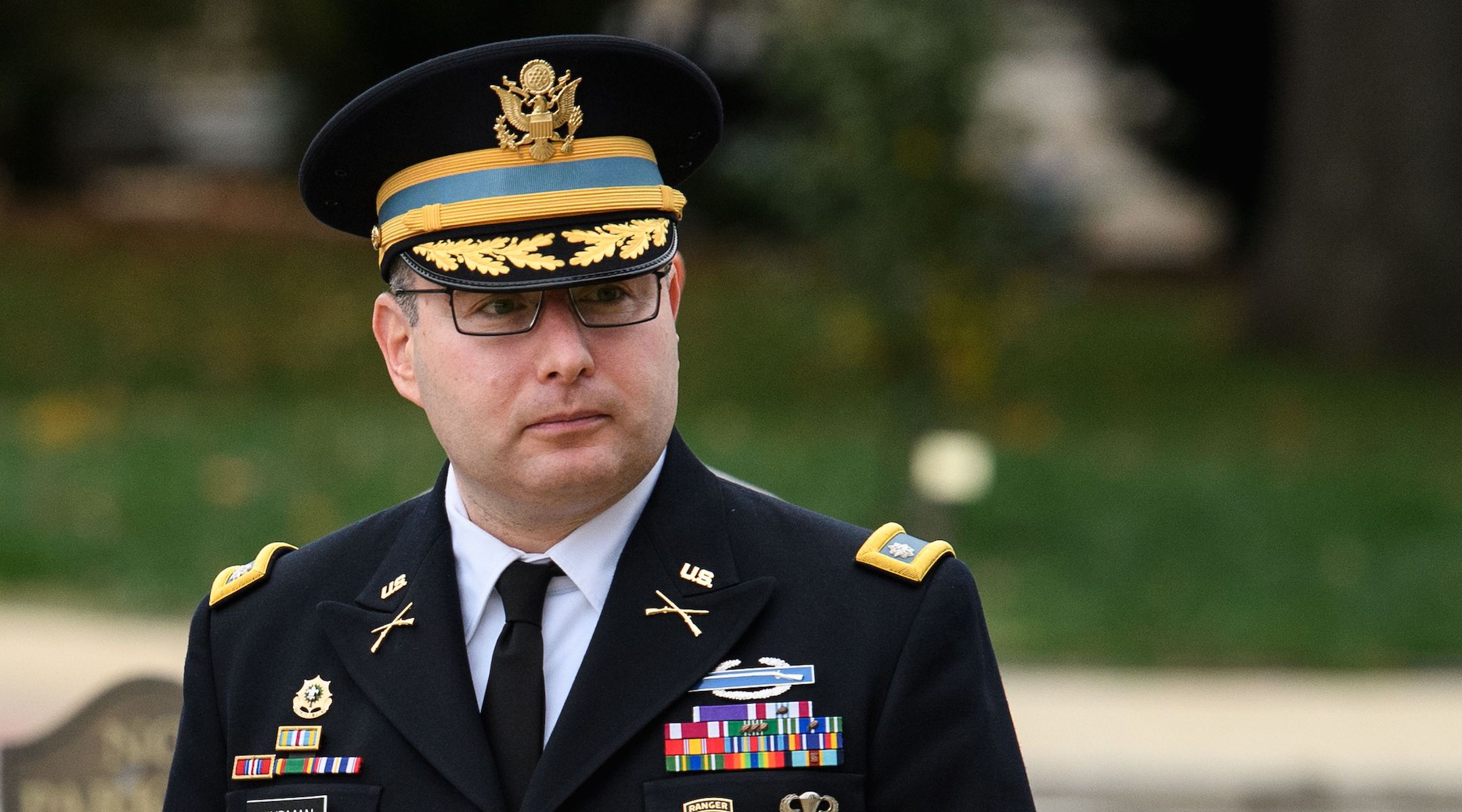 WASHINGTON (JTA) — Lt. Col. Alexander Vindman, the National Security Council staffer set to deliver dramatic testimony confirming that President Donald Trump sought dirt from Ukraine on a political rival, is a Jewish refugee from that country when it was part of the Soviet Union.

“I did not think it was proper to demand that a foreign government investigate a U.S. citizen, and I was worried about the implications for the U.S. government’s support of Ukraine,” Vindman, an Army officer and the top NSC official handling Ukraine, says in testimony posted Monday evening by The New York Times, which he is set to deliver to congressional investigators on Tuesday.

Trump has denied that he sought a quid pro quo in a July phone call with Volodymyr Zelensky in which he asked the Ukrainian president to investigate former Vice President Joe Biden, a leading contender for the Democratic presidential nomination. Trump simultaneously was withholding nearly $400 million in congressionally approved defense assistance to Ukraine. Trump released the assistance last month and has insisted that it was not held back as a means of pressuring Ukraine to find damaging information about the Bidens.

Vindman, who listened in on the conversation in his official capacity, would be the first whistleblower to have firsthand knowledge of the call.

“I realized that if Ukraine pursued an investigation into the Bidens and Burisma, it would likely be interpreted as a partisan play which would undoubtedly result in Ukraine losing the bipartisan support it has thus far maintained,” he said in his prepared testimony.

Burisma is a mining concern that for a period employed Biden’s son Hunter. Allegations by Trump and others that Biden and his son were engaged in corrupt behavior have not been substantiated.

Vindman earned a Purple Heart for bravery when he was wounded in Iraq by an IED. He graduated from Harvard with a degree in Russian, Eastern European and Central Asian studies.

An online album by Carol Kitman, a photographer, documents the life of Vindman and his twin brother, Eugene, who also served in the military, since she spotted them in 1980, then 4 years old, strolling in Brooklyn’s Brighton Beach with their grandmother. They had arrived from the Soviet Union in 1979, according to Kitman.

His mother had died in Ukraine, and his father brought the twins and an older brother to the United States for a better life along with their maternal grandmother, who would care for them. A 1985 photo of the twins and their grandmother sitting on the boardwalk in Brighton Beach, known as “Little Odessa” because of the influx of Jews from Ukraine, featured in a Ken Burns documentary on the Statue of Liberty.

“Upon arriving in New York City in 1979, my father worked multiple jobs to support us, all the while learning English at night,” Vindman says in his written testimony. “He stressed to us the importance of fully integrating into our adopted country. For many years, life was quite difficult. In spite of our challenging beginnings, my family worked to build its own American dream.”

Kitman used the boys as models in a Jewish counting book, “One Mezuzah.” One of the online album photos shows them learning Torah from a rabbi, the husband of her co-author.

Another photo shows Alexander marrying his wife, Rachel, under a tallit. Eugene Vindman is a lawyer on the national security council.