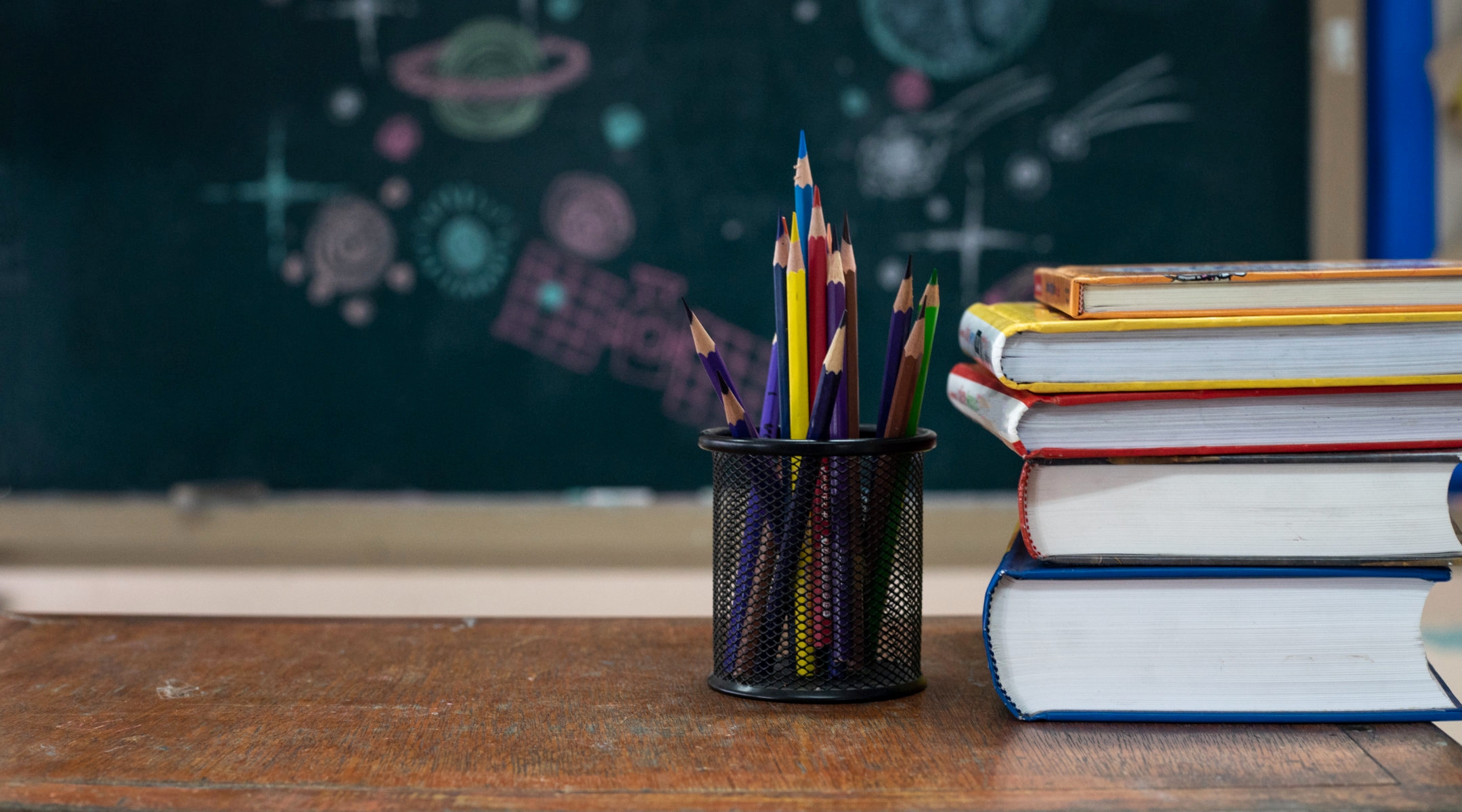 An elementary school with colored pencils on the teacher's desk. (iStock)
Advertisement

BIRMINGHAM, England (JTA) — My heart jumped when I saw the phone number of my oldest son’s school on the screen.

“Don’t worry, Lucas is fine. Only — I just wanted to let you know that there was a little anti-Semitic incident at school today.”

Breathe in, breathe out.

“What happened this time?” I asked.

The last time there had been a “little anti-Semitic incident” was when Lucas mentioned being Jewish in a religious education class during the first year of secondary school, and one of his classmates teased, “Hope you don’t get gassed!” That time I had to bring it to the school’s attention.

My husband and I grew up in insular Canadian Jewish communities. We attended Jewish day schools through high school, Jewish sleepaway camps and Shabbatons. We met on our year abroad in Israel. When we had kids, I wanted them to have the same strong sense and love of Yiddishkeit that I had. So we sent them to Jewish preschools and Jewish day schools.

When my husband was offered a job at the University of Warwick, in Coventry, England, a place with a negligible Jewish population, I realized our children would have upbringings very different from our own. But in many ways I was excited about what that meant: friends from all kinds of backgrounds, worldliness, empathy across ethnic and religious lines. Also, who doesn’t love a British accent?

We moved to Birmingham so that we could send our children — who were then all elementary school age —  to King David Primary, the only Jewish school between London and Manchester. Small and heimish, academically solid in both secular and religious studies and located in a lovely, leafy area of this city, it was a no-brainer. My children would not only get a Jewish education, but they would also get the diversity I treasured and lacked in my own youth: the KD students and their families come from Britain, Israel, America, Canada and France — as well as Pakistan, India, Malaysia and Bosnia.

About 85 percent of the student body of King David Primary is Muslim. If you enter the schoolyard, you’ll see most mothers wearing headscarves; many wear a full niqab. Some of the girls wear headscarves, too, and the boys, who are required to cover their heads (it is an Orthodox Jewish school, after all), wear the Muslim white knit caps that seem barely distinguishable from kippahs. The kids all participate in daily prayers, covering their eyes and reciting the Shema. They do weekly school kiddushes, eat in a sukkah on Sukkot and perform a mock seder before Passover.

In England, where there is no separation of church and state, a “collective act of daily worship” is required by all primary schools according to the School Standards and Framework Act of 1998. Unless the school is a specific faith school, that worship must be “wholly or mainly of a broadly Christian character.” In other words, as we and many other religious minority groups see it, all schools in England are faith schools — some are just more honest about it.

Religious schools here are state-funded and require that applicants fill out a nominal Declaration of Practice of Faith to receive priority admission (this practice-based determination emerged as a result of a 2009 landmark case in which a child was not granted admission to a London Jewish state school because his mother’s conversion was not recognized by the chief rabbi). Answering only one question in the affirmative (i.e., “Do you perform the Mitzvah of Mezuzah by ensuring one is affixed to the front door of your home?”) is sufficient to be considered Jewish by the state’s standards.

So, Jewish children are given priority, but with a limited number of Jewish kids to fill the classrooms of King David, the doors are opened wide to children of the neighborhood — and neighboring faiths.

Some Muslim families choose King David because it offers a good education. Others appreciate its kosher food, which many Muslims consider halal. And it is thought that a school that is intended for a religious minority is likely to be more sensitive to religious minorities.

One Muslim friend of mine, whose sons are classmates of my children, told me about her family escaping the Bosnian genocide. I told her that my grandparents were Holocaust survivors. She said that our tragic history and sense of community — similar to her own — was part of what drew her to the school.

At its core, Islam has very close ties to Judaism, and grassroots organizations are popping up around the globe to remind us of our connections. So why should I be surprised that our Muslim friends make up some of our greatest allies?

Let me return to the call from my oldest son’s school. Lucas is in secondary school, having graduated from King David a number of years ago. The secondary school has a diverse student body and tries to be sensitive to the different needs of the students, but we have our grievances. Every year we have to argue with the school to let Lucas take the Jewish High Holidays off (we’ve involved our rabbi and a religious education advisory committee).

Still, things go smoothly for the most part. Lucas likes his school.

The recent incident involved a boy who was new to the school. Every period, he was asked the same question by the teacher: “What brought you to our school?” and every period he gave the same answer: “My teacher at my last school was Jewish! And I hate Jews!”

When he got to Lucas’ class, he repeated this behavior — and the person who stood up for my son was a Muslim student named Omar.

Omar and Lucas are not really “mates,” as they say here. I don’t think that’s why Omar stepped up when the situation arose. I think that in addition to having parents with good values, Omar is sensitive to racism, and particularly anti-Jewish racism, because he is a graduate of the King David Primary School.

Maybe it’s a “funny thing” that Muslims say the Shema, as observers to the school have noted, and maybe the Jewish education does not have the depth it would have if all the students were Jewish. But it does seem to have a profound effect on the children who go there, and these children carry with them a respect for Jews that they spread far and wide.

Karen E. H. Skinazi
, PhD, is a senior lecturer and Director of Liberal Arts at the University of Bristol in the UK. She is author of Women of Valor: Orthodox Jewish Troll Fighters, Crime Writers, and Rock Stars in Contemporary Literature and Culture (Rutgers University Press, 2018).
The views and opinions expressed in this article are those of the author and do not necessarily reflect the views of JTA or its parent company, 70 Faces Media.