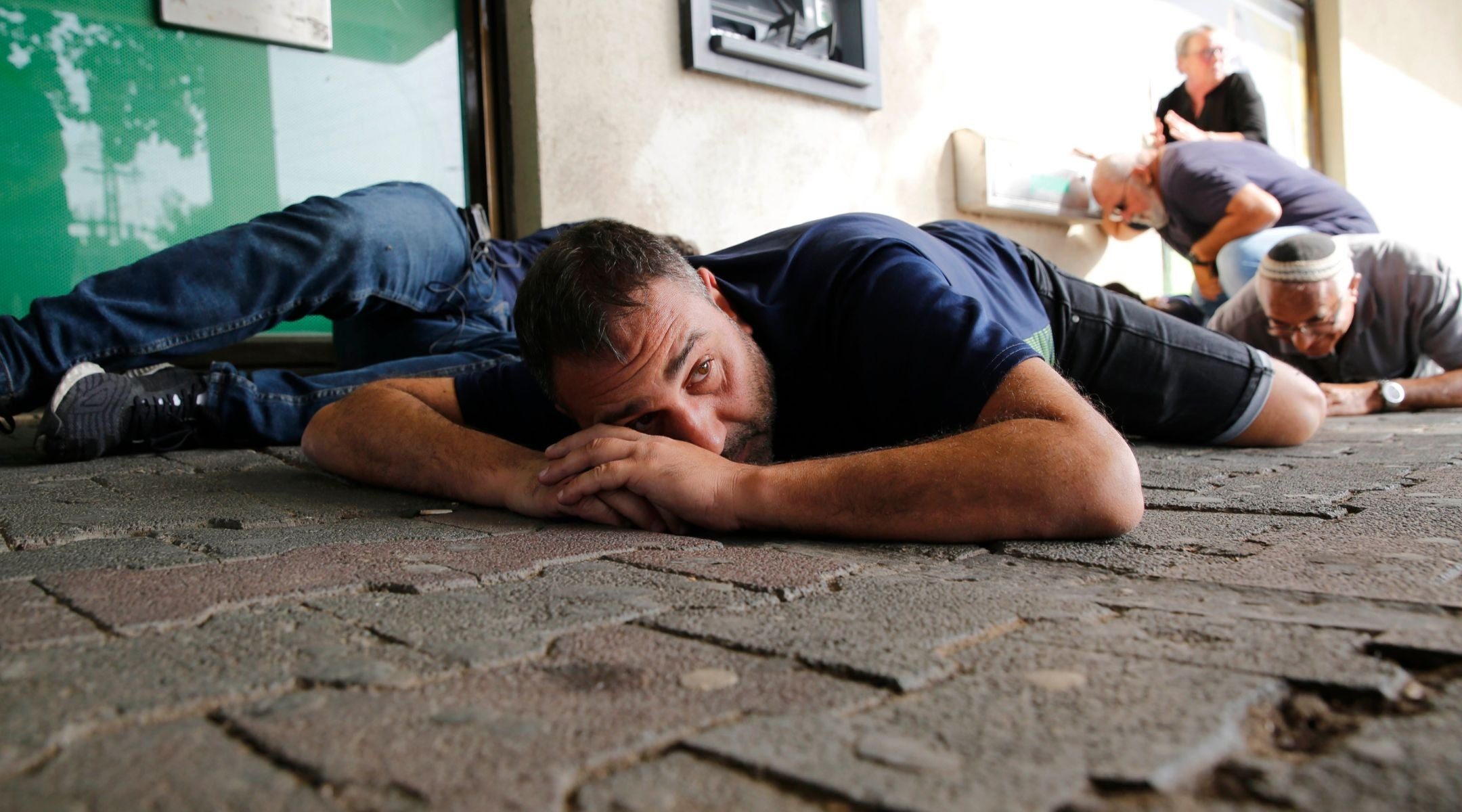 Israelis take cover in the street during a rocket attack from Gaza on Ashkelon, in southern Israel, Nov. 13, 2019. (Gil Cohen-Magen/AFP via Getty Images)
Advertisement

JERUSALEM (JTA) — Palestinian terror groups have fired more than 300 rockets on Israel as the barrage continued for a second day.

After a brief overnight lull, the attacks continued beginning early Wednesday morning on the southern and central parts of the country since the targeted killing by the Israeli army of Palestinian Islamic Jihad senior commander Baha Abu al-Ata on Tuesday morning.

The Iron Dome missile defense system has intercepted some 90 percent of the rockets, according to the Israel Defense Forces. Most of Wednesday’s rockets fell in communities near the Gaza border, though at least one round targeted Latrun, located 15 miles west of Jerusalem.

On Wednesday morning, Islamic Jihad claimed responsibility for the attacks, saying they were in response to the assassination of Abu al-Ata and also for the attempt to kill senior Islamic Jihad leader Akram Al-Ajouri in Damascus, for which Israel is being blamed by the terror group.

Islamic Jihad said it was not ready to discuss a cease-fire with Israel. A spokesman for the group said it will “continue conveying our message to Israel and once we finish, it will be the time to speak about calming things down.”

The IDF struck back at Islamic Jihad targets on Wednesday, including rocket launchers and a rocket manufacturing factory. At least 23 Gaza Palestinians have been killed in the strikes, according to reports citing Gaza’s Health Ministry. More than half of the dead have been claimed as members of Islamic Jihad and other terror groups.

Israeli Prime Minister Benjamin Netanyahu at the start of a Cabinet meeting on Wednesday reiterated to citizens that “this could take time,” and warned them to follow the instructions of the IDF Home Front Command.

“I said yesterday that we are not bent on escalation, but that we would respond to every attack against us, and respond very sharply. Islamic Jihad would do well to understand this right now, instead of when it will be too late,” he said. “We are determined to fight to defend our country and if they think that these barrages or these strikes will weaken us or lessen our determination, they are mistaken.”