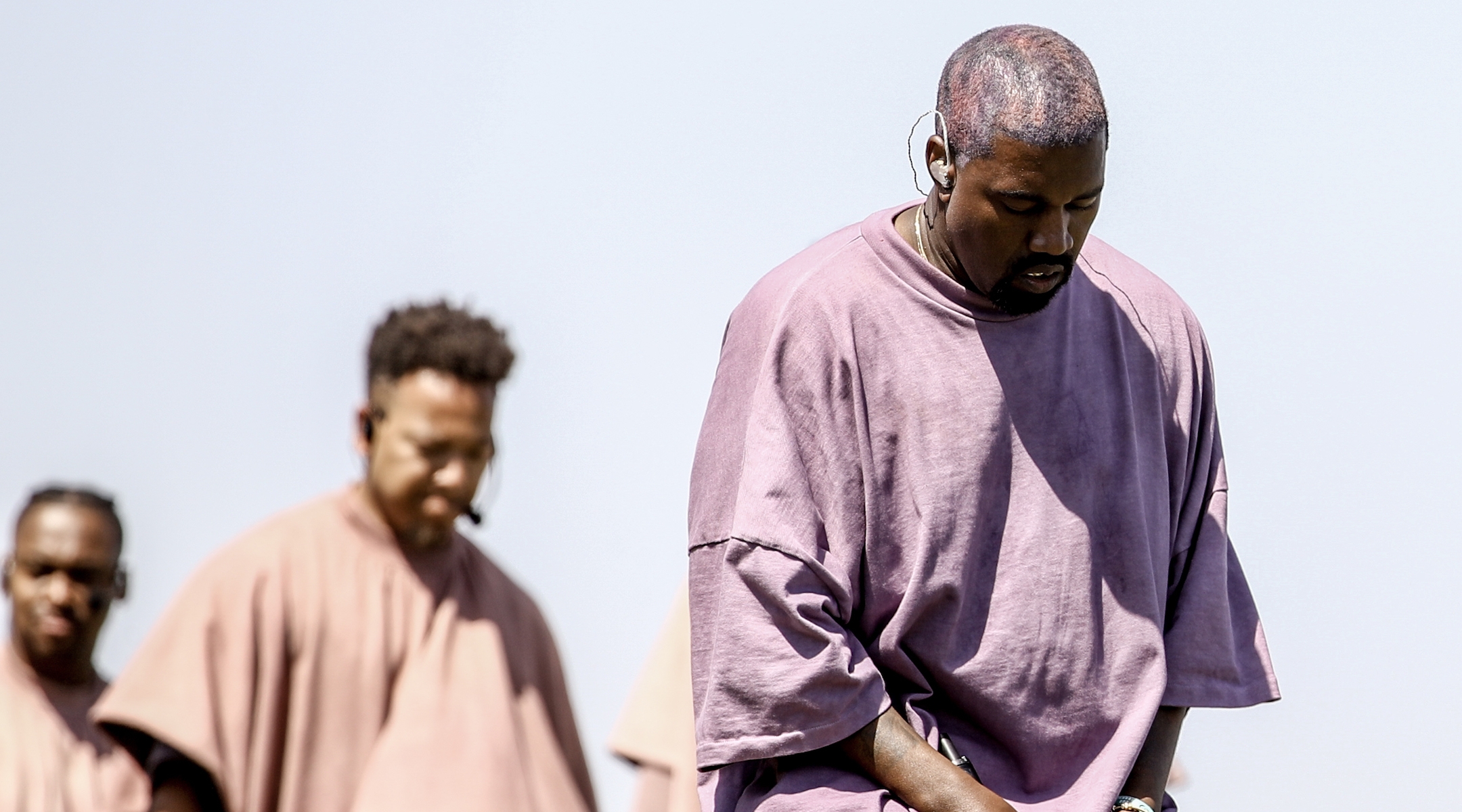 (JTA) — Love him or hate him, rapper Kanye West has done nothing if not evolve over the course of his career. He has cycled through mainstream hip-hop, auto-tuned singing, soulful sampling, epic egotistical commentary and — as he would happily tell you — much more.

At the moment, West is in the midst of an intensely religious phase.

Since the beginning of the year he has held what he calls a Sunday Service each week — a pop-up Christian service of sorts that has rotated through different (at times secret) locations across the country. It involves some prayer, but it’s mainly focused on a live gospel choir covering songs by him and others. Some of his celebrity friends have started attending, and it’s become so popular that he bought a property in Wyoming to host larger versions.

Last month, West released a gospel-infused album titled “Jesus is King,” on which he raps and sings almost exclusively about his newfound love for God. He has since announced he will produce a “Jesus is King Part II” with the help of Dr. Dre and visited Joel Osteen’s megachurch in Houston.

So it wasn’t overly surprising when West announced that he is premiering a religious-themed opera at the Hollywood Bowl in Los Angeles on Nov. 24. According to a news release, the opera, titled “Nebuchadnezzar,” is “based on the biblical story of the Babylonian King from the Book of Daniel” and “recounts Nebuchadnezzar’s transition from wicked, imperious, self-declared ruler to a true believer who finds salvation in his faith.”

While questions around the authenticity of West’s entire project have split the black and Christian communities, this opera in particular should be raising more eyebrows because of what Nebuchadnezzar did to Jews: He destroyed the First Temple and initiated the Babylonian exile.

Here’s the story: In 588 BCE, Zedekiah, the last ruler of the Kingdom of Judah, attempted to rebel against Nebuchadnezzar, the king of Babylon. Nebuchadnezzar retaliated by laying siege to Jerusalem, starving out the Jews for two years. In 586, the Babylonian army burned down the city, including the First Temple. Nebuchadnezzar enslaved the surviving Jews.

It’s one of the bloodiest episodes in Jewish history, remembered each year on the fast day of Tisha b’Av,  which also marks the end of a three-week period of mourning tied to the destruction of both the First and Second Temples, as well as other calamities to befall the Jewish people. It’s a somber time during which observant Jews traditionally abstain from celebrations and other joyful activities.

West has likely become enamored with Nebuchadnezzar for less sinister reasons. The rapper, who was diagnosed as bipolar in late 2016 and went through a nervous breakdown before discovering his newfound religiosity, has claimed in interviews that Nebuchadnezzar also was bipolar and similarly found his faith following an episode of mental illness. Some scholars say the Babylonian believed at one point that he had turned into an ox.

From the Bible: “He was driven away from people and ate grass like the ox. His body was drenched with the dew of heaven until his hair grew like the feathers of an eagle and his nails like the claws of a bird. At the end of that time, I, Nebuchadnezzar, raised my eyes toward heaven, and my sanity was restored. Then I praised the Most High.”

Despite that positive narrative from the Nebuchadnezzar storyline, and whatever inspiration West may have taken from it, the bloody history remains. West might want to check on the specifics of whom he’s praising these days.