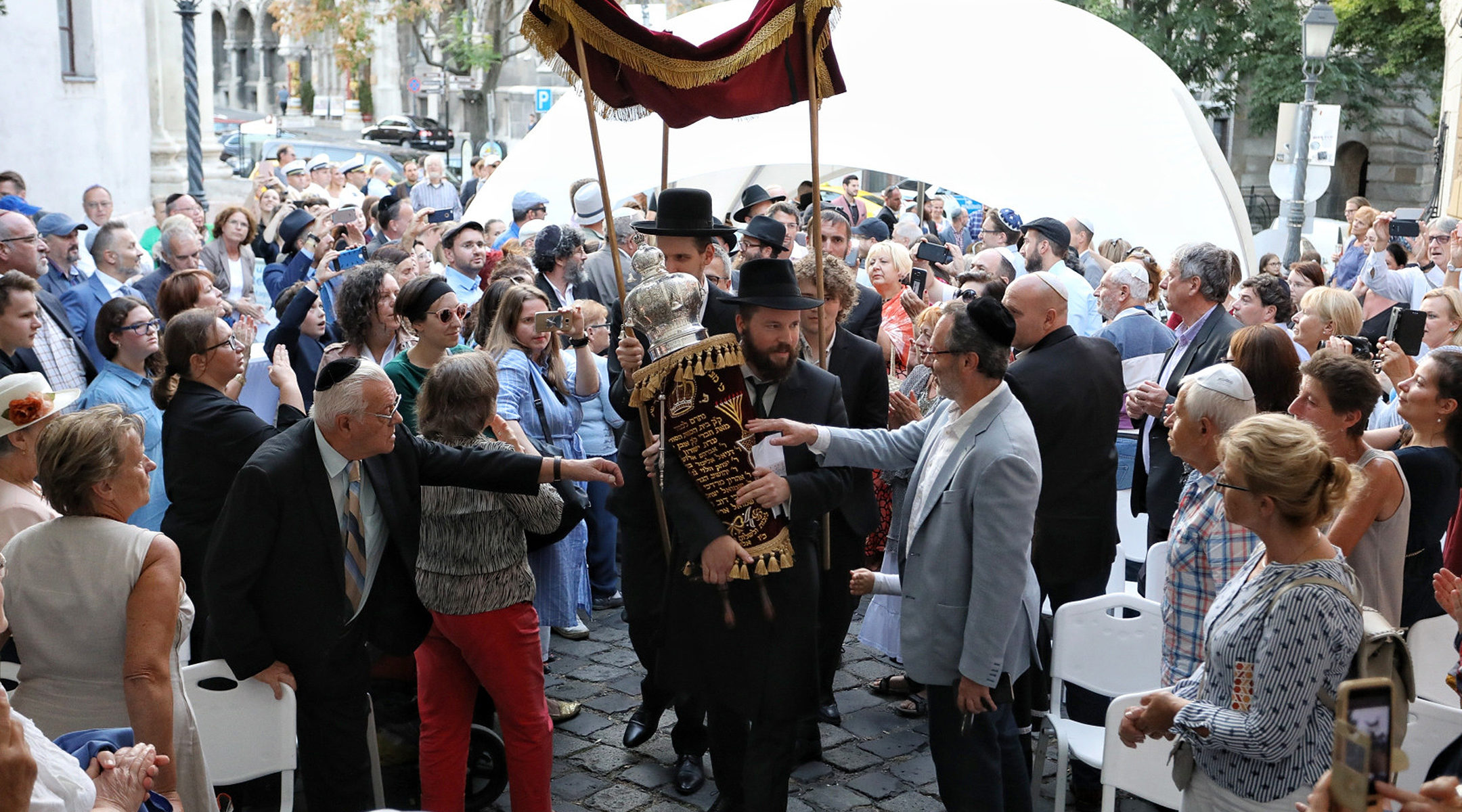 BUDAPEST (JTA) — Most of this Hungarian capital’s approximately 20 synagogues are concentrated in three districts in Pest, the bustling half of the city east of the Danube River, along with five Jewish community centers, multiple Jewish schools and several kosher shops.

Clustered in the beating heart of Budapest’s famous nightlife, the synagogues of Pest tell a remarkable story of revival following the devastation of the Holocaust and decades of oppression under communism.

But to Cintia Perlaki-Myers, a 23-year-old expectant mother, those houses of worship pale in comparison to the drabber and relatively unknown synagogues of Buda, the city’s western and quieter half, where Budapest’s Jewish story began about 1,000 ago. 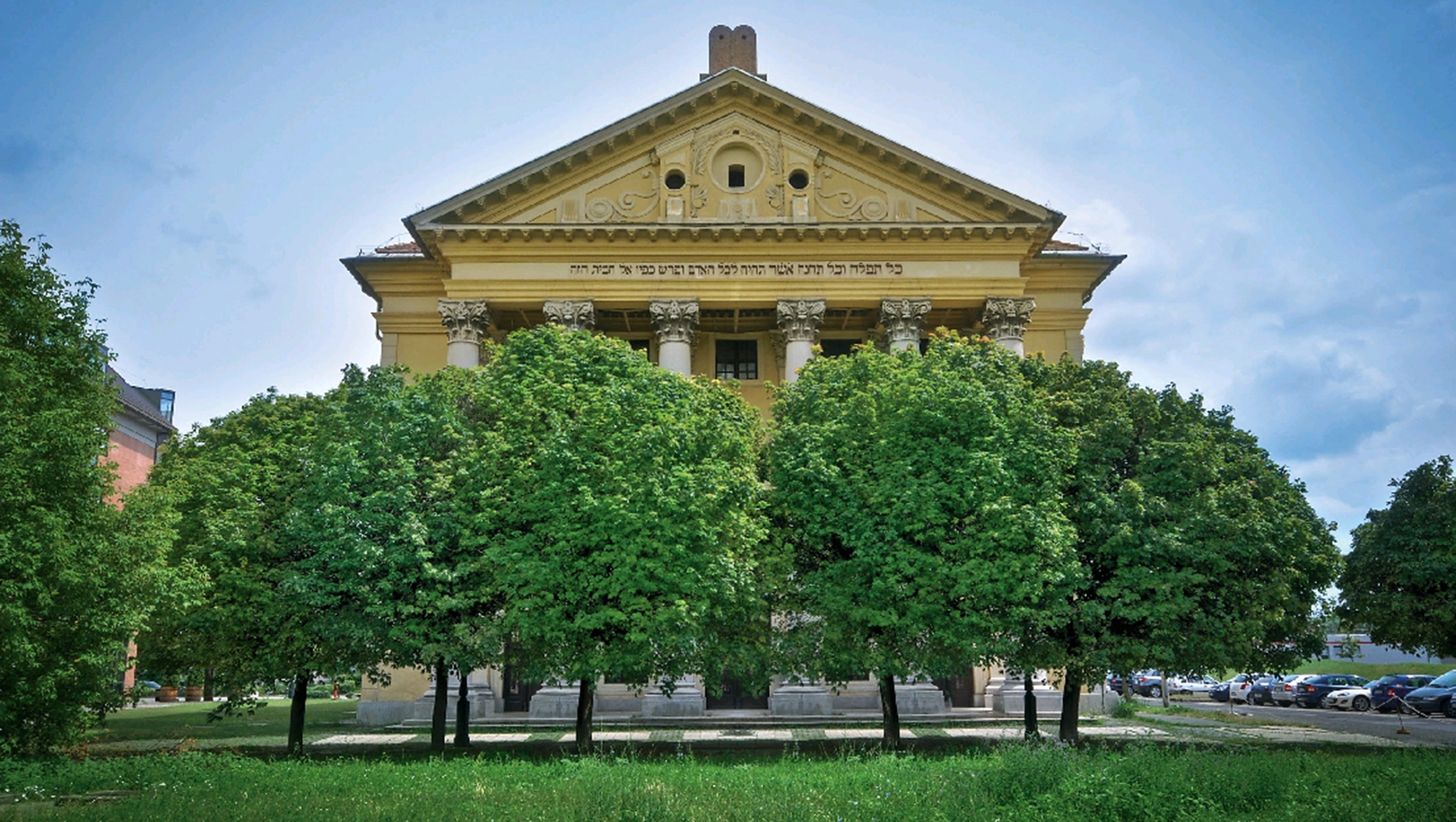 The Obuda Synagogue in Budapest is a 200-year-old French Empire-style building. (Courtesy of EMIH)

“It’s continuity. It’s victory,” Perlaki-Myers said of her 2017 wedding in Buda’s largest synagogue, the Óbuda Synagogue, a 200-year-old French Empire-style building where her great-grandparents also wed. “Standing under the chuppah at the place where they had stood, I felt like we won, the Jews won. Despite everything they did to destroy us, we are still there.”

Jewish life has been making a slow but significant return to leafy and placid Buda in recent years. Three of the four synagogues in Buda today have opened since 2010. In 2016, a Jewish high school opened there for the first time in over a century.

The latest addition to Jewish institutions in Buda also was the most symbolic one. Last year, the Buda Castle Synagogue, the oldest in the city, was reopened following centuries of disuse.

Established in 1346, the synagogue operated for more than three centuries until it was ransacked by crusaders who took the city from Turkish rulers in 1686, according to the tiny museum housed in the synagogue. Tucked deep inside the castle walls, the museum offers a welcome respite from Budapest’s crushing heat waves in summer. 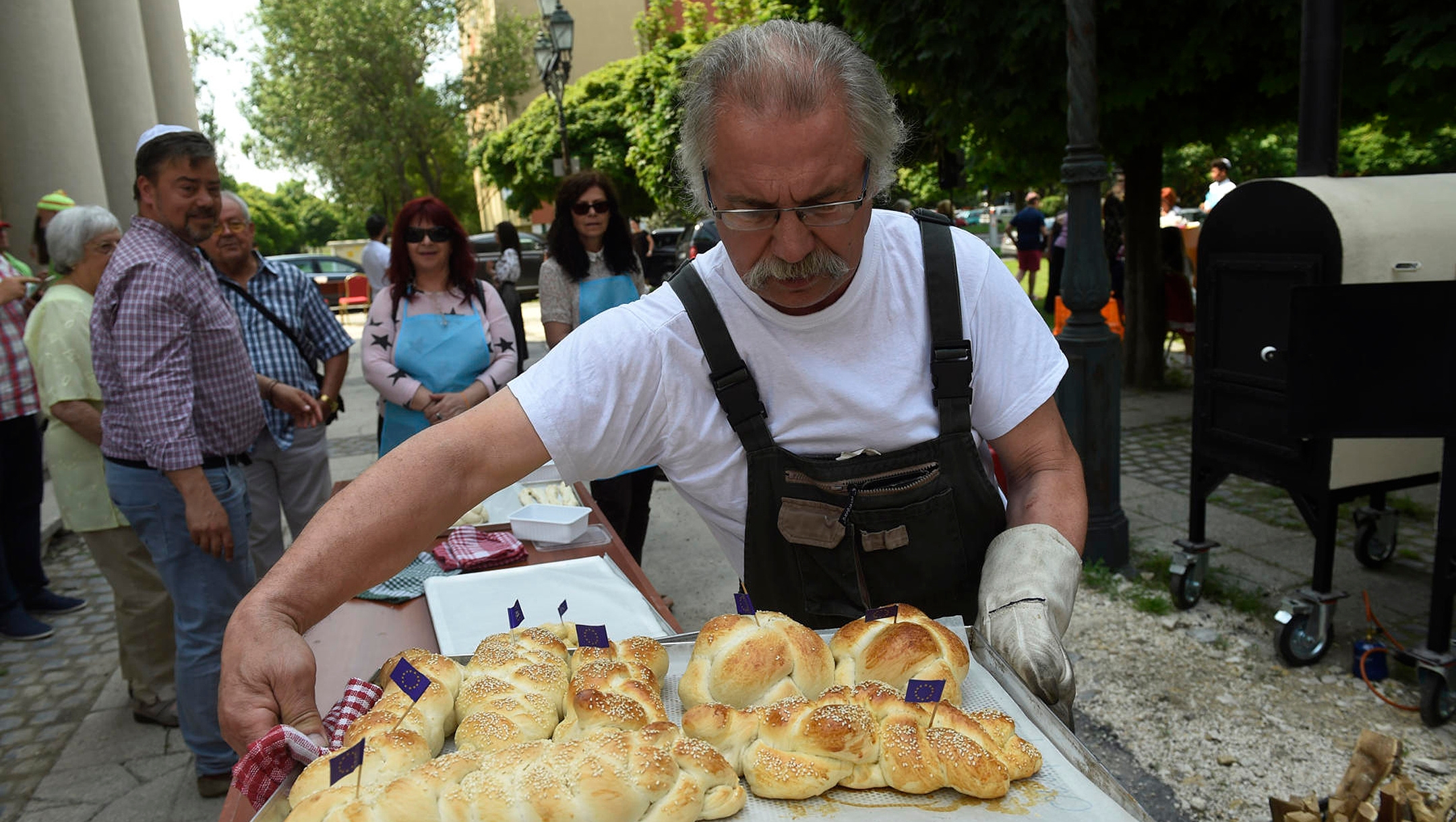 Jews have lived in Buda since the second half of the 12th century, according to the Beit Hatfutsot Museum of the Jewish People in Israel. The first mention of Jews living in Pest came more than a century later, in 1406.

At first, Jews built synagogues in Buda because that was the only place they were allowed, said Rabbi Shlomo Koves, the head of Unified Hungarian Jewish Congregation, or EMIH, an affiliate of the Chabad Hasidic movement. Koves also runs the Obuda Synagogue.

But the Jews left in droves for Pest after the city’s unification in the 19th century. Many were drawn to Pest because their businesses were there, but moving meant a serious decline for Judaism in Buda. Still, Buda had a thriving Jewish community until the Nazis arrived in 1944.

Nobody knows how many Jews live in Buda today, but their presence began to grow slowly after World War II as Buda became the residence of choice for locals seeking a higher quality of life than in crowded Pest. Despite being roughly equal to Pest in size, Buda has only 28 percent of the Hungarian capital’s population of 1.7 million.

Today, the Obuda Synagogue is “a nice place to meet and talk about business” for the many bankers, entrepreneurs and investors who comprise a significant part of the local Jewish community, according to Ivan Eros, a 41-year-old economist who moved here from Pest’s 13th district in 1997.

On Friday nights, many worshippers stick around for a plate of cholent, the iconic Ashkenazi bean stew. Regulars can expect birthday cakes from other congregants, said Nora Szilagyi, another community member. 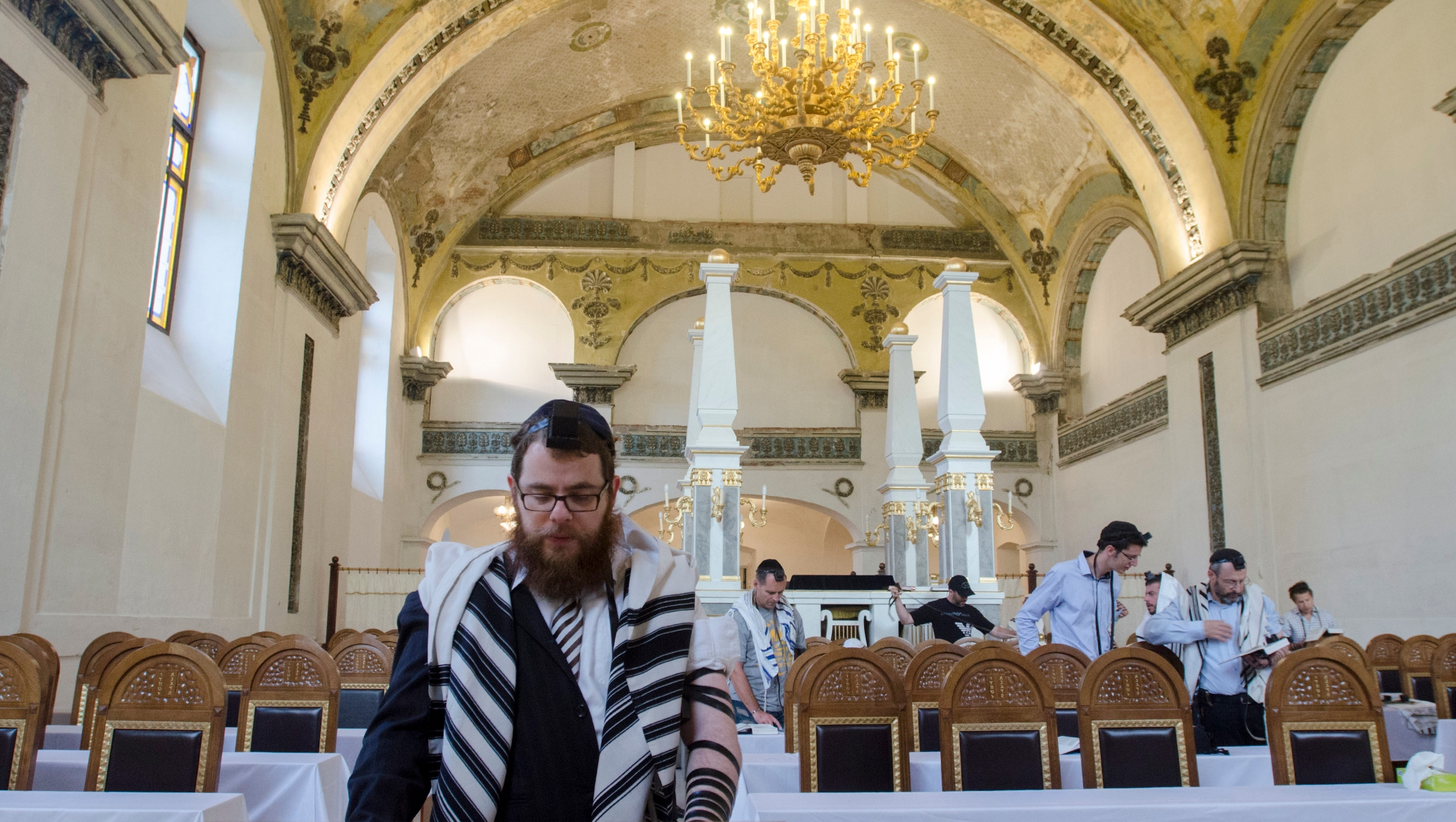 Janos Lang, a Holocaust survivor who was born in this part of town, celebrated his 82nd birthday at the synagogue earlier this month. A retired musician and businessman, he attends Friday night prayers and a Torah study group.

Lang said he has made many good memories at the Obuda Synagogue. His earliest recollections, however, are full of fear and pain.

At the age of 7, he and his family were kept prisoner opposite the shuttered synagogue in a so-called Yellow Star House — one of 1,934 Budapest buildings that Nazi collaborators turned into small detention centers during the Holocaust. He escaped but was sent to the ghetto in Pest, where his grandmother barely managed to feed him. Once she served meat that she carved off a dead horse.

“The loss of life during the Holocaust was horrible, and so far irreplaceable,” Lang said, adding that the revival of Jewish life in Buda and in Hungary “can only mitigate [some of] this loss.”

Two of Buda’s synagogues are Orthodox and affiliated with Chabad. The other two are Neolog, a Jewish denomination native to Central Europe that is roughly equivalent to Conservative Judaism in the United States.

All of them, however, are what locals describe as “heimish,” a Yiddish word that means cozy and homey. The synagogues of Pest are larger, but some are tourist attractions where foreigners often outnumber the locals.

Rabbi Tamas Vero’s Frankel Synagogue, a 400-seat Neolog establishment that was the only synagogue that remained open in Buda during the communist era, advertises itself as “the most friendly” in Budapest and “famous for welcoming young families with children.”

The 2015 opening of the Maimonides Jewish school, spearheaded by Koves, gave a major boost to Jewish life in Buda, according to Peter Klein, a businessman who attends Koves’ synagogue and enrolled his daughter at Maimonides. 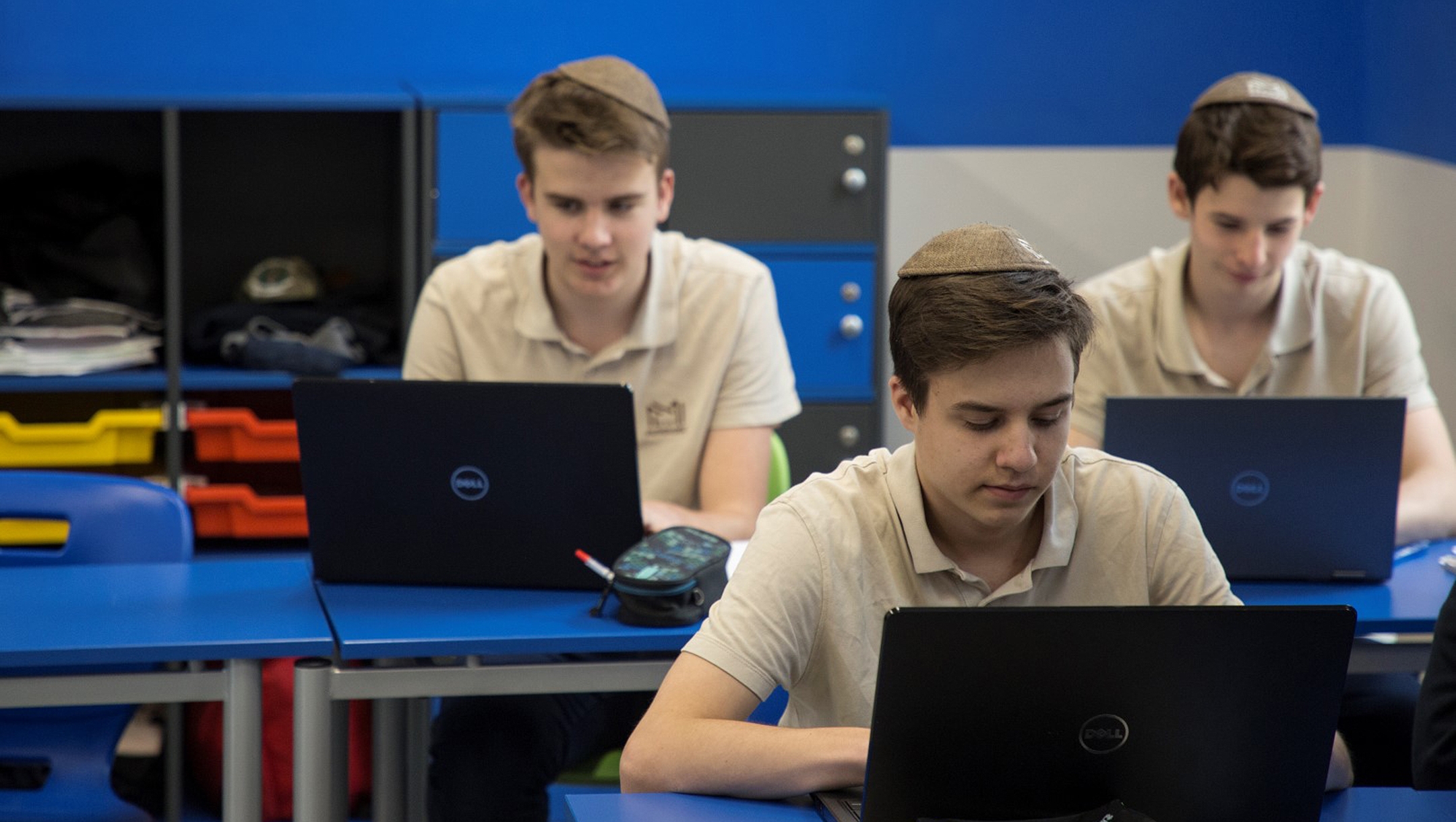 “It matters that there’s now a synagogue near us, that there’s a school nearby,” Klein said. “Budapest isn’t huge and Pest is just across the river, but it makes things just a little more comfortable to be Jewish.”

Maimonides has a student body of about 50 and its design resembles a high-tech startup, with state-of-the art touch screens for chalkboards. EMIH waves tuition costs for students who are Jewish according to Orthodox Jewish law.

Some of Buda’s newly opened Jewish institutions — including the school, the castle synagogue and the Obuda Synagogue — exist thanks to help from the Hungarian government, which some critics say has encouraged anti-Semitism with its nationalist agenda, including a campaign against the left-leaning Hungarian-Jewish billionaire George Soros.

But Lang disagrees, calling the government of Prime Minister Viktor Orban “a good friend of the Jews and also the State of Israel.”

“How long will this keep, I do not know,” he said, adding that after all, anti-Semitism in Hungary has “a grand tradition.”

“It depends always on the government in power,” Lang said.