Hummus is becoming popular in Ukraine. Jews there opened a zhug factory to capitalize on it. 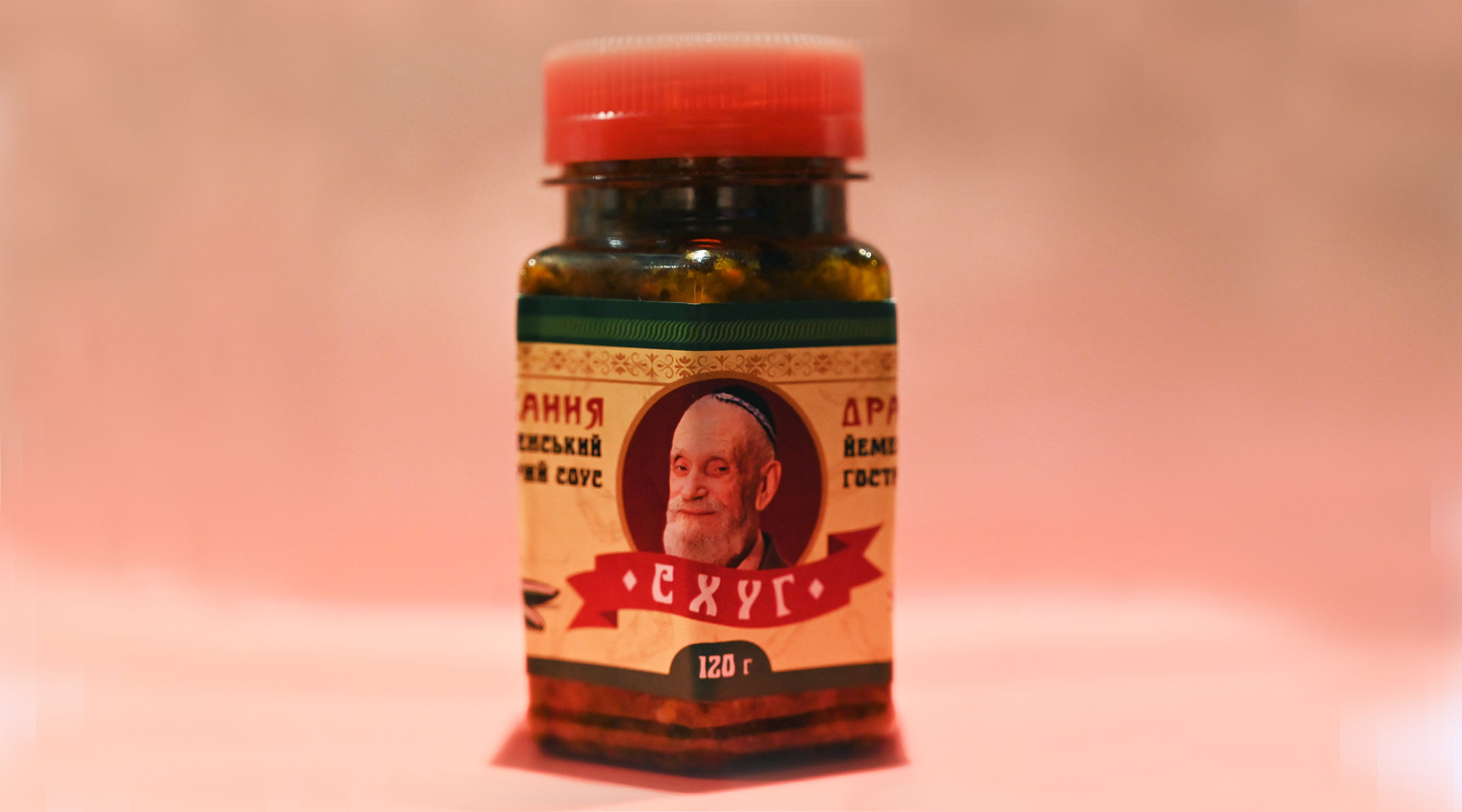 TAIROVE, Ukraine (JTA) — For a couple of days each week, the Black Sea breeze carries the aroma of cilantro across this town near Odessa.

The smell blends nicely with the scents that by noon rise from blander and more traditional Ukrainian foods boiling in the kitchens of this working-class suburb. But the herb common in Middle Eastern cooking isn’t part of anyone’s dinner here.

Rather it’s the main ingredient in the spicy Yemenite hot sauce known as zhug, a common topping for hummus that Ukranian Jews are producing in the hopes of meeting communal needs amid a slowing economy.

Earlier this year, the Odessa Jewish community opened a zhug factory in a converted residential apartment. The factory — apparently the only one of its kind in Ukraine, and perhaps in Eastern Europe — hopes to ride the growing popularity of hummus here. Even only a few years ago, the staple Middle Eastern dish hadn’t been available for sale almost anywhere in the country, according to the Depo news site.

“Zhug is doing well because four, five years ago the average, non-Jewish person in Odessa had no idea what hummus is,” said Anatoliy Kesselman, the head of the Odessa branch of Hesed, a local Jewish charitable organization and the inspiration for the zhug factory. “But over the last couple of years, hummus arrived in most supermarkets.”

Kesselman was driven to open the factory by the mounting economic needs of Ukrainian Jews.

According to Kesselman, the costs of utilities like gas and heating have risen by a factor of seven since 2013, when revolution broke out in Ukraine and the country found itself in an armed conflict with Russia. The economic situation both increased the demand for Hesed’s assistance while limiting the ability of local philanthropists to shoulder the burden of providing relief. Local donations have shrunk by about 80 percent since 2010, Kesselman said.

With that in mind Kesselman, a longtime lover of hummus, noticed that the Middle Eastern chickpea paste was starting to pop up in Ukrainian supermarkets decades after its debut in the West.

“I like hummus, but a plate without zhug is a shame,” said Kesselman, who used to depend on friends and family visiting Israel to keep him in supply of the sauce.

Kesselman got a local businessman to convert an apartment in Tairove into a zhug factory. He recruited community members to work there and found a local rabbi, Avraham Wolf, to provide kosher supervision. The product, marketed under the menacing label Dragon’s Breath, is cleared for sale by Ukraine’s Ministry of Health. 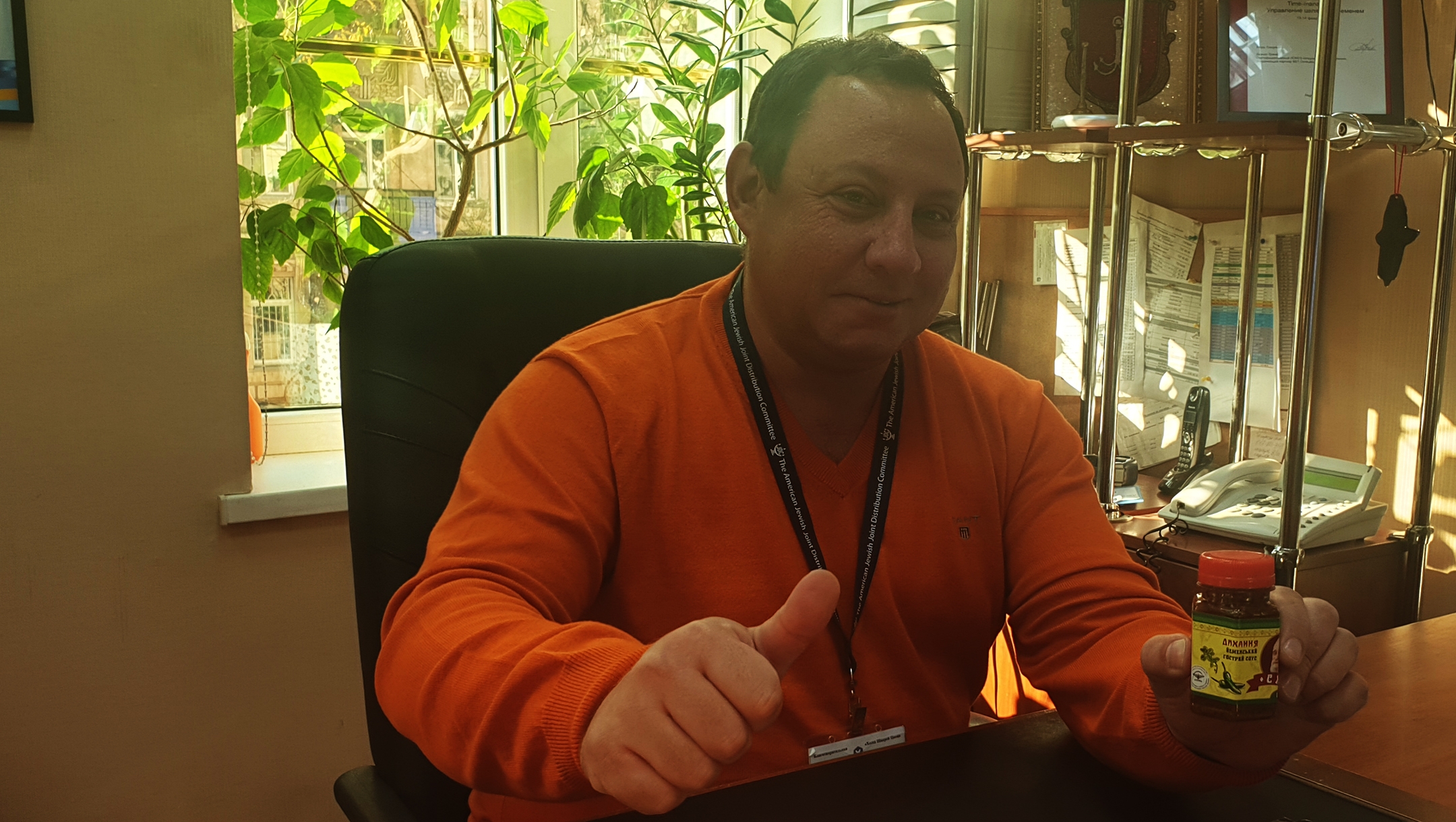 Situated only 340 miles from the Turkish coast, Odessa may be the ideal place in Ukraine to start producing zhug. Centuries of interaction with the Middle East have accustomed the local palate to the region’s flavors.

The Dragon’s Breath logo features a portrait of Boris Volkov, an elderly Jew who is among the 5,500 recipients of assistance from Hesed in the Odessa region. He is wearing a kippah and sporting a white beard. Volkov agreed — with some reservation — to have the beard trimmed for the photoshoot.

Since the factory became operational six months ago, it has sold 1,700 4-once jars of zhug that sell for the equivalent of $2.50 — a relatively high price in a country where the median monthly salary is about $400.

Stores that specialize in kosher food were the first to feature the spice, but the big break came in August when the Kopika chain of supermarkets, which has more than 70 branches across southern Ukraine, agreed to stock the zhug. Sales increased dramatically.

Kopika has waived its margin, transferring all profits to Hesed, which thus far has seen a profit of several thousand dollars. The funds have paid for activities and medical costs for about 26 children with special needs, Kesselman said.

The monies could not have come at a more critical time for Odessa’s Hesed branch. Funding from the Joint Distribution Committee, the American-based Jewish relief organization, and its partners for projects in Ukraine was about $50 million in 2018 — $3 million less than Hesed’s average annual budget since 2012 and 16 percent lower than what the JDC allocated to Ukrainian projects at the start of the crisis in 2014.

The Odessa initiative is part of a wider effort by JDC to train its employees and encourage and its beneficiaries across the region to set up profit-making micro-enterprises. JDC also provides training for

In Chisinau, Moldova, the local Hesed chapter last year published a cookbook of local recipes that it sells locally. And in 2017, the JDC-sponsored Jewish community center in Zaporizhzhia, in eastern Ukraine, opened a secondhand store staffed by volunteers and stocked with items donated by community members.

At the zhug factory, a three-room apartment with its balcony used to cool steaming pots of zhug, two mentally challenged recipients of Hesed aid — Kostiya Aliabiv, 35, and Alla Donskaya, 32 — are packing the product they prepared with their mothers.

“We’ve received so much from Hesed, it feels good to be giving back,” said Tania, Anna’s 59-year-old mother. “When you have a disabled child, only people who are experiencing the same thing really understand how it’s like. It leaves you isolated. And this is an opportunity to come together with people in my situation. It reminds me of when I would cook with my family and neighbors in a communal apartment during communism.”

None of the volunteers have dared to taste the zhug, according to Luba, Kostiya’s 71-year-old mother.