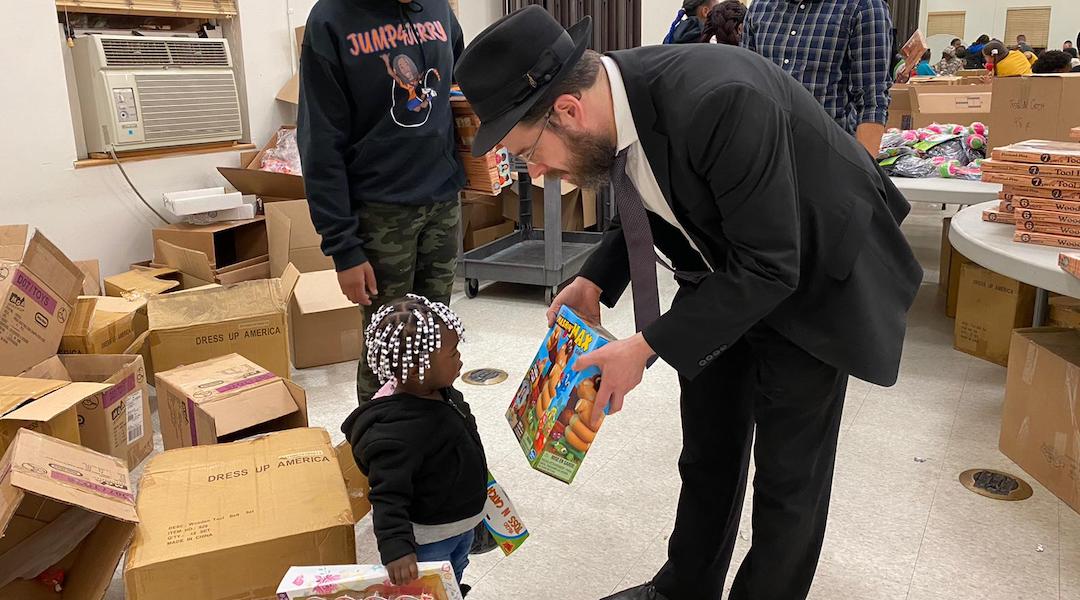 Rabbi Moshe Schapiro shows a toy to a child during the charity drive in Jersey City, N.J., Dec. 23, 2019. (Courtesy of Benny Polatseck)
Advertisement

(JTA) — All day Monday, volunteers trickled in and out of the Mary McLeod Bethune Life Center in Jersey City’s Greenville neighborhood, lining up boxes upon boxes of pretzel challah, soup mix, hummus, turkey and chocolate. Trucks backed up to the community center to unload pallets of food and toys from nearby Jewish vendors.

Thirteen days earlier, and just four blocks down Martin Luther King Drive, two shooters entered the JC Kosher Supermarket, killing three people during a gun battle with police and shaking this African-American neighborhood with a growing Hasidic community. (The shooters had killed a police officer before taking a van to the market.)

On Monday, the feeling could not have been more different, black and Jewish volunteers working together on a charity drive on the second night of Hanukkah and two days before Christmas. The food and presents were delivered to hundreds of local families in need.

“We’ve been in communication since the tragedy on Dec. 10 trying to find ways to work together as a community,” said Pam Johnson, a drive organizer and the leader of the Jersey City Anti-Violence Coalition Movement. “We wanted to make sure that we sent a clear message of solidarity, that we are all in this together.”

The drive was born of an informal meeting Thursday between Jewish community leaders and local officials. By Monday, with the help of Masbia, a network of Brooklyn soup kitchens, a handful of kosher food vendors, Jewish-owned toy companies and a nonprofit came together to rustle up supplies.

“A lot of nice words are being spoken, and, yeah — unity, unity — but we wanted to find a way to really show the community that from now on, unity means more than words,” said Benny Polatseck, who volunteered at the event. “There needs to be more awareness in the Orthodox community that we live together in the community. We have to acknowledge and see one another.”

Watch how members the Jersey City Hasidic Jewish community and the African-American community came together last night to bring a little bit of light and lots of holiday cheer to the grief-stricken neighborhood of Greenville in Jersey City. pic.twitter.com/9mVGRRdfR8

Some 40 cases of soup mix, 12 cases of chocolate, 20 cases of hummus, 60 cases of turkey slices and 30 cases of pudding arrived on pallets, much of it from Kayco, a kosher food company. Yoni’s Pretzel Challah, in the nearby town of Saddle Brook, delivered some 300 loaves each of challah and ciabatta. The Metropolitan Council on Jewish Poverty supplied stacks of baking kits with oil, flour, baking soda and other staples. Toys4You brought dolls, building sets and ball games.

On Monday, families lined up around the block to receive the goods. Johnson estimates that 250 families benefited from the drive. A team of 10 volunteers from across the community was there to set up, staying past 8 p.m.

“It felt amazing — it’s more than amazing,” said Chesky Deutsch, who has lived in Greenville for two years and was an organizer of the drive. “We moved into this community, and I see these people every day, and I see some of them are really desperate, really, really in need, and I really feel for them, so it felt amazing to actually do something.”

Deutsch and Johnson both said that Greenville’s black and Jewish residents share common priorities: keeping their kids safe and the neighborhood affordable. They plan to meet in the coming days to see how they can continue collaborating. Other neighborhoods in and around New York City with African-American and Jewish residents have seen interethnic tensions in the past, something Deutsch says has been largely absent in Greenville. 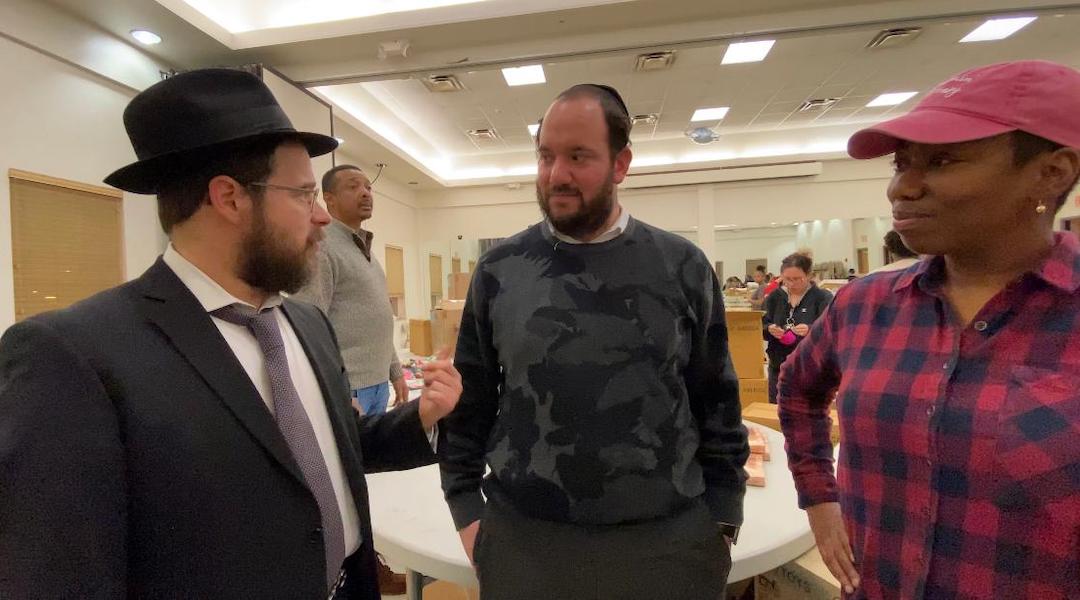 “Greenville, Jersey City, should be the example of how a community [is] not only coexisting but literally living door by door in harmony,” he added.

Johnson said there are no particular tensions between blacks and Jews in Jersey City. The black community’s concern about gentrification isn’t specifically directed at Jews, a phenomenon that extends beyond the city’s growing Jewish community. She hopes that the charity drive will lead Greenville’s residents to collaborate on a shared agenda that transcends ethnic background.

“Events like yesterday [are] something that shows a clear unity in our community as far as it pertains to everyone feeling like they’re being thought about and their cries are being heard,” Johnson said.  “If we’re united as a community, we can demand and force our elected officials to create policy.”