How Miami became a haven for Venezuelan Jews 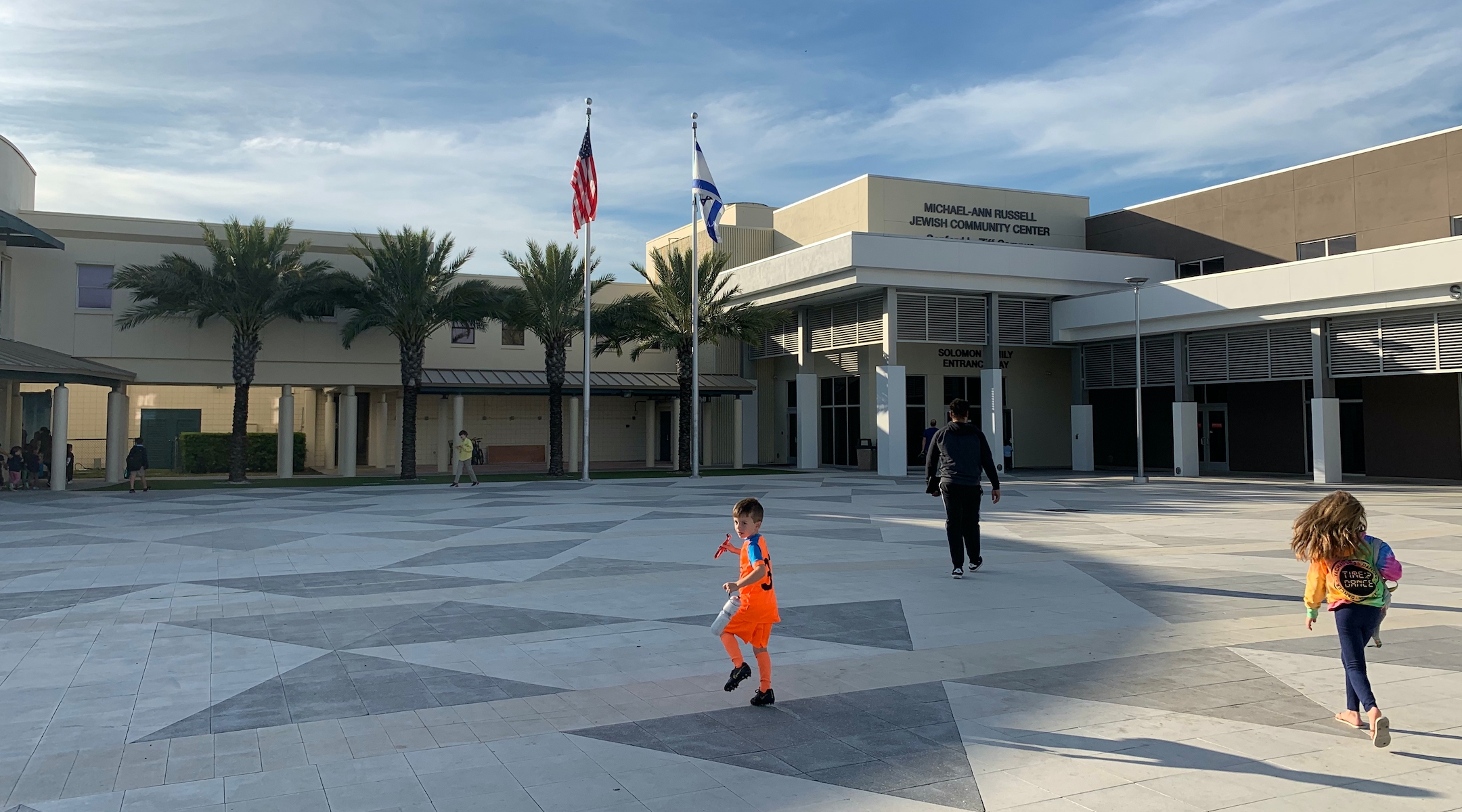 NORTH MIAMI BEACH, Florida (JTA) — Jackeline Nichols knew it was time to leave her native Venezuela when within the span of a few months two of her neighbors were kidnapped. Though both were eventually returned after their families paid ransoms, the incidents shook Nichols.

Then, one of her kids got sick with a stomach flu and her husband needed to go to five different pharmacies to get medicine.

These situations are not out of the ordinary in Venezuela, whose once flourishing economy has collapsed over the last few years as the country has been mired in a political crisis. Poor living conditions — including a rise in professional kidnappings alongside shortages of food and medicine — have led millions of Venezuelans to flee.

“We were putting our families at risk,” said Nichols, 43, who served as president of the Hebraica, the Caracas Jewish community center, from 2012 to 2014. “We have three children and they were getting to be teenagers, where we knew they would want to start going out with friends and going to the mall and doing the things that teenagers do, and we felt that it was no longer safe for them.”

Though her husband is American and has family in Chicago, and the couple had job offers in other cities, the choice was obvious. 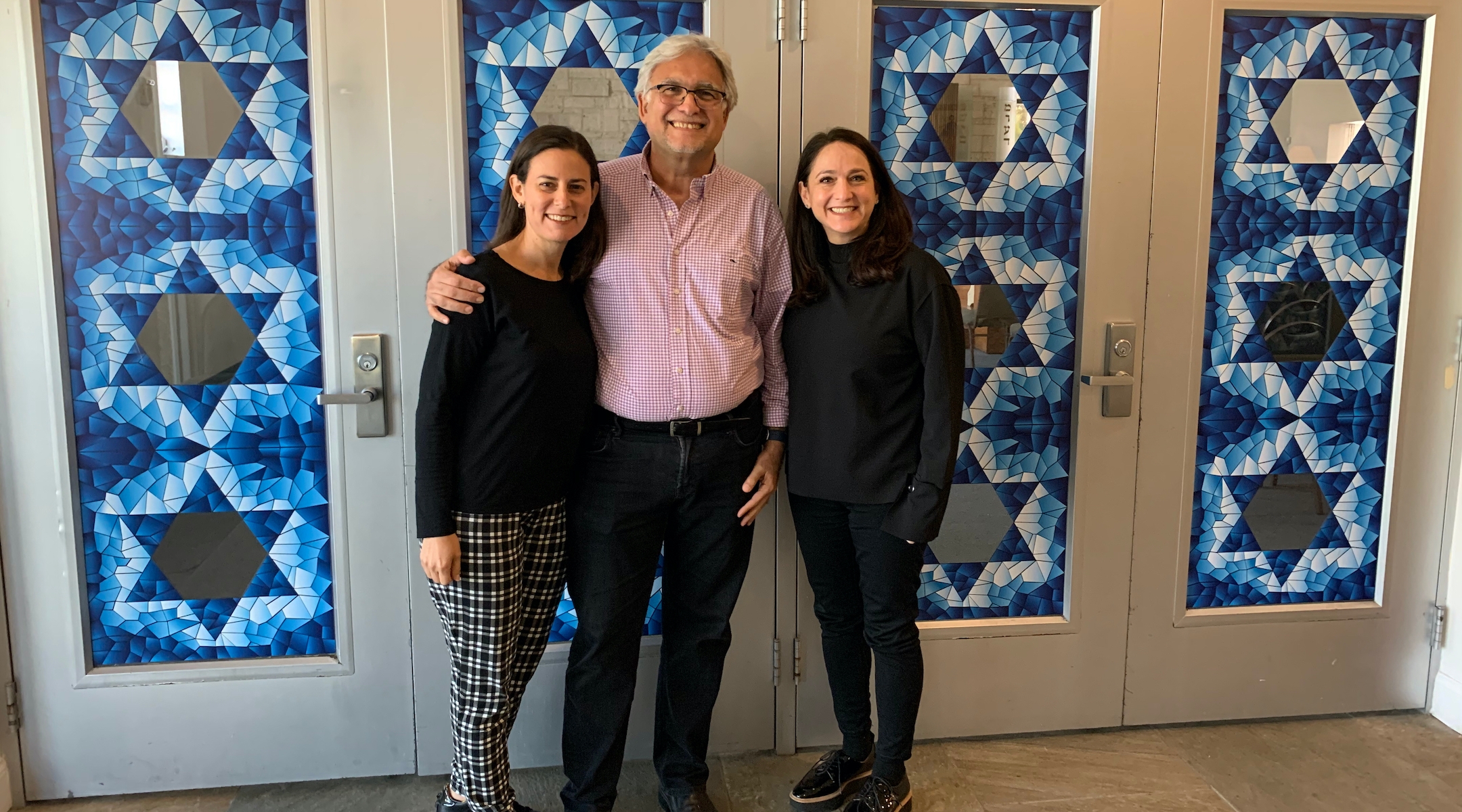 From left to right, Jackeline Nichols, David Bassan and Dana Nicolaievsky are all members of Skylake Synagogue, which has a large Venezuelan population. (Josefin Dolsten)

“We knew that here we had half of their classmates that had already moved in elementary school,” Nichols said. “We had uncles and cousins that we could have Shabbat with. The neighborhood they were familiar with because they had been here on vacation many times. So Miami is the stepping stone. This is the easiest transition, in some ways, for many of us here.”

Miami is home to a large Latin American Jewish population. The first wave of Jewish immigrants from Latin America came from Cuba after Fidel Castro’s revolution in 1959. The area has since seen Jews come from a number of other countries in the region — including Venezuela, Colombia, Mexico, Argentina and Peru.

Visitors to the Michael-Ann Russell Jewish Community Center in North Miami Beach can expect to hear more Spanish than English spoken on its 17.5 acre campus.

“In the elderly community, you’ll find more English speaking than you would find Spanish speaking here — that’s 75 and older — and then the moment you move down to 50s and [under], that reverses itself,” said CEO Alan Sataloff.

Around 80 percent of the JCC’s members come from Latin American countries, and Venezuelans make up the largest portion of that group, at 40 percent. At a recent Maccabi games event, where kids compete for their country of origin, 460 kids out of the 2,000 participants represented Venezuela.

The fastest growing ethnic group within the Jewish community of Miami is Hispanic Jews, who represent the plurality of foreign-born adults, according to a 2014 population study by the Greater Miami Jewish Federation. The study also found that Venezuela was the fourth largest home country for foreign-born Jews in the region — after Israel, Cuba and Argentina.

Venezuelans have continued to move since then and many settle in North Miami Beach and nearby Aventura, a Miami suburb. Venezuelan Jews are also highly active in the Jewish community.

The North Miami Beach JCC has tailored its programs to the Latin American community. It has a department called Hebraica, which is the name for Jewish community centers in various Latin American cities, not only Caracas. The department offers a range of programming for Hispanic Jews, including a youth group.

Even the activities it offers reflect the community’s preferences. Soccer and dance, both popular in Latin America, yes. Baseball, an American staple, no.

Having a place to go for such activities helps ease the transition for new emigres such as Nathalia Coriat, who moved with her family two years ago. Like many others, Coriat, 43, wasn’t happy about leaving the tight-knit community in Caracas behind, and she misses Hebraica, where she would frequently take her children.

“I would like to go back to Venezuela, but it’s not a real thing now,” said Coriat, who lives in Aventura. 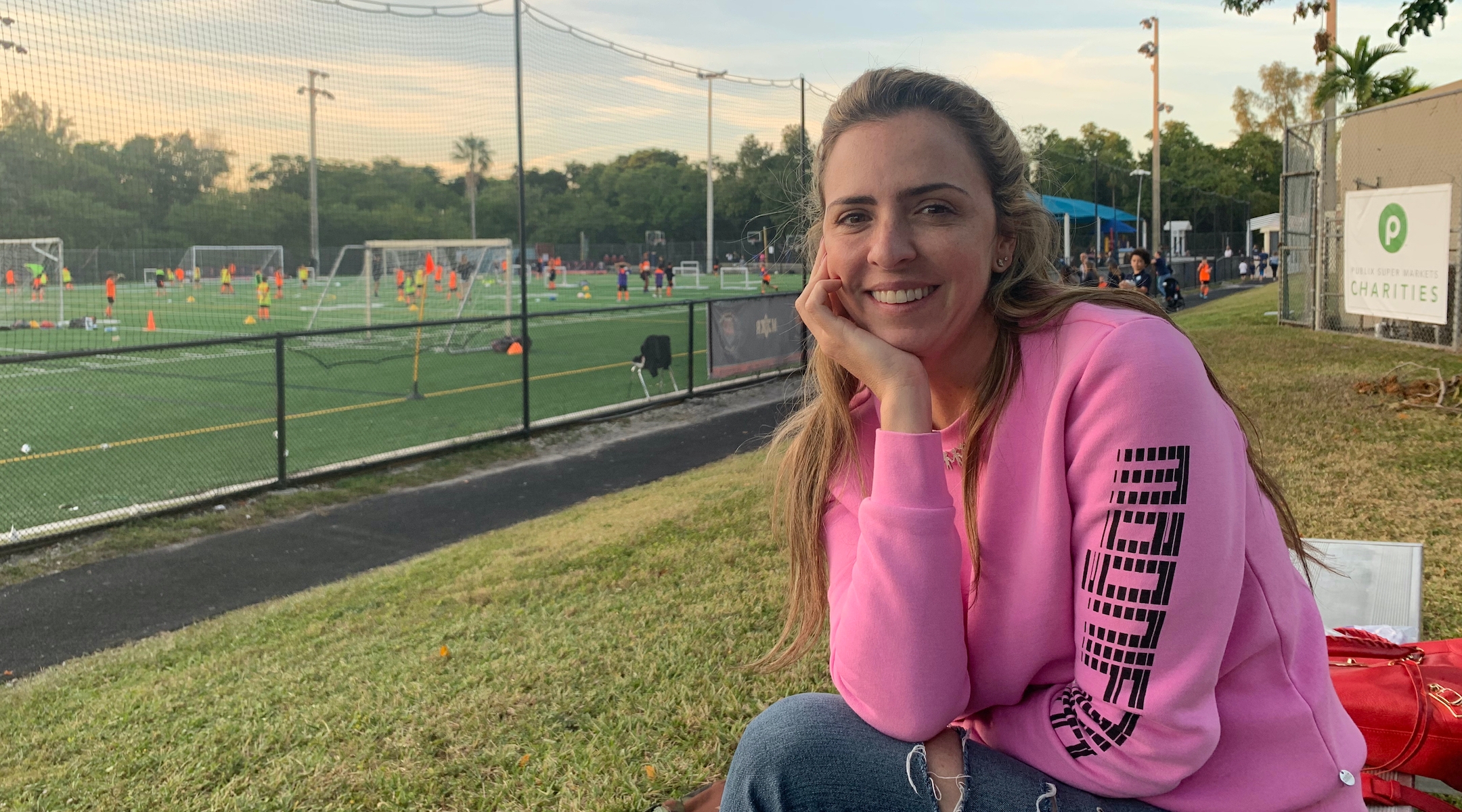 Nathalia Coriat moved to Aventura from Caracas two years ago with her family. (Josefin Dolsten)

Though many in the Jewish community are sad to leave, almost everyone wants to do so, Coriat said.

“The people that have the possibility to move [do]. A lot of people in Venezuela, they can’t move because to live here is very expensive,” she said.

In the 1980s, there were an estimated 25,000 Jews living in Venezuela, but today that number is said to be 5,000, said Nichols, the Caracas community leader who left the country in 2015. She said that out of about 70 kids who graduated from the Jewish high school in Caracas two years ago, only 10 stayed in Venezuela.

Some Jews move to Israel, Spain or Panama, but Miami is often the destination of choice for wealthier families, who are able to get residency permits by studying or finding jobs in the United States, or through investment visas. As the community in Venezuela has shrunk and aged, the newcomers in Miami have helped bolster new communities.

One such community is Skylake Synagogue, a Modern Orthodox congregation in North Miami Beach where Nichols is a member.

The synagogue is led by Rabbi Ariel Yeshurun, an Israeli who came to Miami after having served as a rabbi on the island of Curacao. When Yeshurun, whose family comes from Iran and Yemen, started at Skylake Synagogue six years ago, the synagogue had around 250 members. Today, the synagogue has some 700 members, about 90 percent of whom are immigrants from Latin America. Around 65 percent of those are from Venezuela.

“A few Venezuelans came here. A friend brings a friend and slowly but surely this community developed into one of the strongholds [of the] Venezuelan presence here in Miami,” he said.

To keep up with rising demand, Yeshurun, 43, started to buy up properties around the synagogue around four years ago. Now he has bought five lots to build a 49,300 square-foot complex that will take up most of the block.

The planned complex will house two separate sanctuaries (one for Ashkenazi and one for Sephardi services), a social hall that will fit around 1,000 people, classrooms, a mikvah ritual bath, a library and a store that will sell clothes at a steep discount to those in need. It will also host activities for kids.

Yeshurun hopes to start building after Passover, and thinks the whole project will take around five or six years to complete, with the first phase being done in about two years.

“We saw the growth and the potential for more growth,” he said. 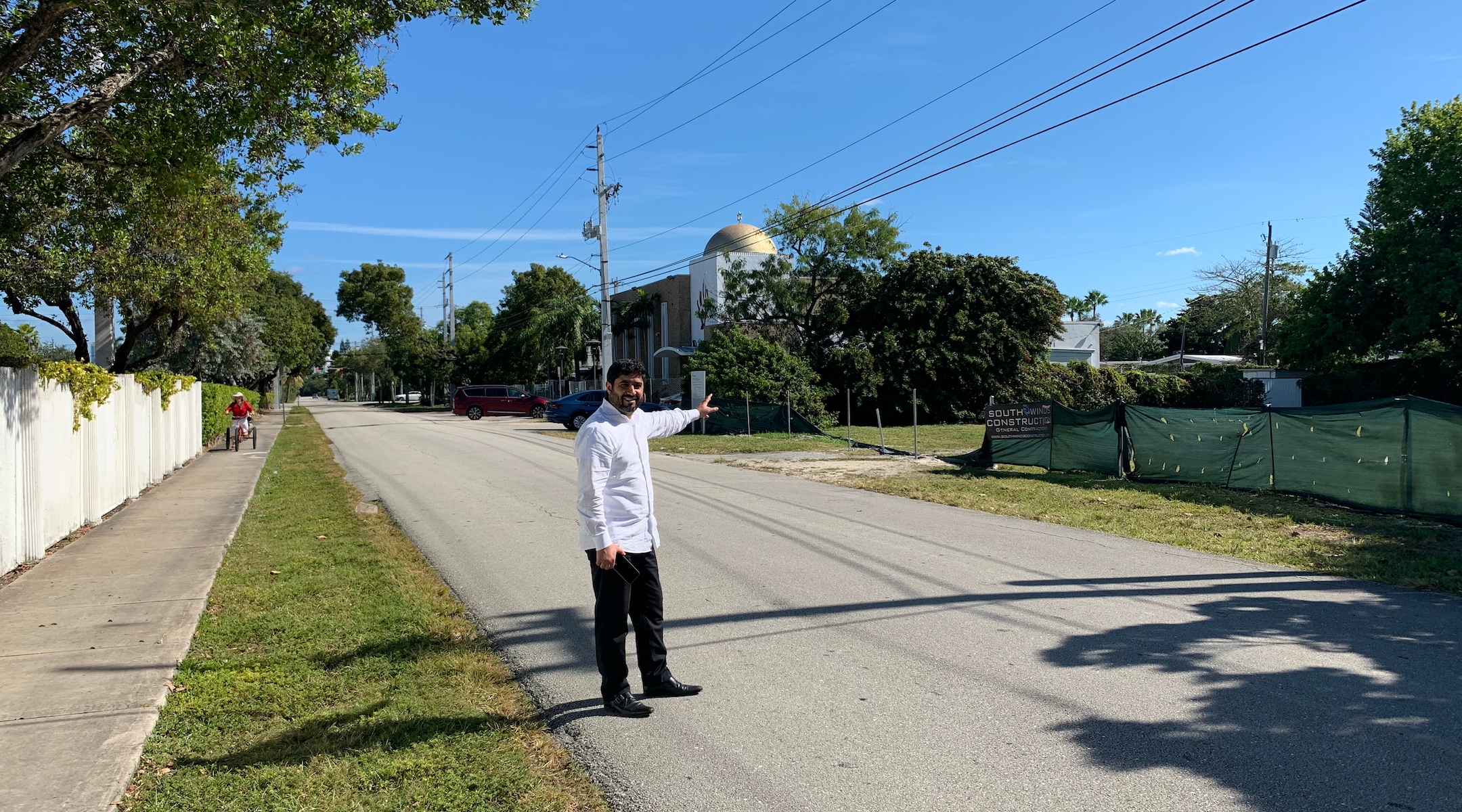 For many, the synagogue provides a way to connect with their roots while also integrating into life in their new home.

“We used to go to shul every Friday evening in Caracas and we know the melodies by heart,” said Nichols. “And coming here for a Shabbat on Friday evening and you feel in a strange place and then you start hearing the exact same melodies for Lecha Dodi and Mizmor Shir and everything, and the kids feel, ‘OK, I can relate to that.’”

Jewish communities in Venezuela, like in other Latin American countries, are home to both Ashkenazi and Sephardi Jews. In order to make both groups feel at home, Yeshurun uses melodies from both traditions during a typical Shabbat service. When someone is called to recite a blessing over the Torah, the rabbi will use the melody that matches that person’s tradition.

That resonates with David Bassan, who left Caracas with his family eight years ago.

“[In Venezuela,] we are a small community, but everybody [studies] in the same school and everybody knows [each other]. We was together, Sephardi and Ashkenazi, and it was a great family,” said Bassan, 62.

The Venezuelans in Miami have made things easier for Jews from other Spanish-speaking countries as well, says Dana Nicolaievsky, who moved from Mexico City to North Miami Beach 10 years ago.

“They have enriched the Latin and non-Latin community here in Miami because they are as active as they were in Venezuela,” said Nicolaievsky, 49, a member of the Skylake Synagogue. Her husband serves as president.

Meanwhile, the experience has also been a ride for Yeshurun, who had been weighing leaving the rabbinate to become a doctor before deciding to accept the job at the congregation.

“We’ve grown beyond our wildest dreams,” he said.