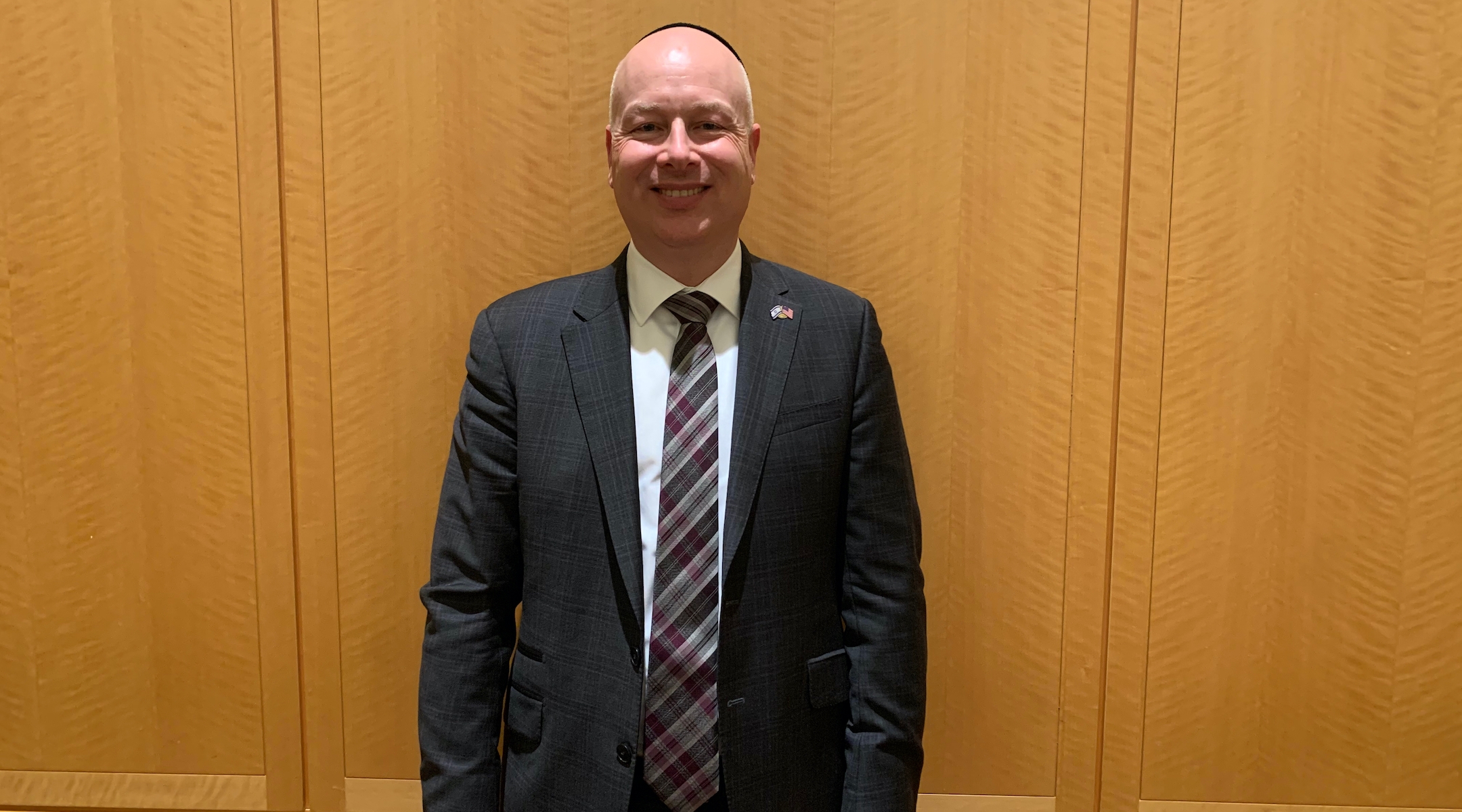 Greenblatt, 52, who worked as a lawyer for Trump for two decades prior to joining the administration, spoke at Congregation Keter Torah in Teaneck, New Jersey, the Modern Orthodox synagogue where he is a member. The event was organized by the Northern New Jersey Holocaust Memorial & Education Center to raise money for a new Holocaust memorial in the township, which has a significant Jewish population.

Sporting a black yarmulke and an American and Israeli flag lapel pin, Greenblatt delivered a long and wide-ranging speech that recounted how his Hungarian-born parents survived the Holocaust and how their stories had impacted him. As his wife and four of his six children listened in the audience, he also denounced the recent spike in anti-Semitic attacks, though he cautioned against pointing fingers at anyone in particular for the increase.

The Jewish Telegraphic Agency spoke with Greenblatt after the event. Here is the conversation, which has been edited for length and clarity.

JTA: What has your life been like since leaving the White House?

Greenblatt: I’m really enjoying it. I have breakfast with my wife every morning. I’m having a lot of very interesting meetings. But mostly spending time with my family, trying to catch up on three years and really just trying to be a father and a husband again.

What are your career plans now?

I don’t know yet. I’m doing some consulting. I want to explore what the opportunities are and where my talents best lie. But I’d like to keep my foot in the region. I’d like to be involved with that to the extent I can and support the White House to the degree that they continue to work on this file.

People recognize that Israel and its neighbors are doing business today in ways they weren’t doing three, five, seven years ago. And people would like to get involved in that, so a lot of people are approaching me, [asking]: “How can I do business in Saudi Arabia, the Emirates, Qatar? What does it take and how do we deepen the connections between Israel and the region and bring it forward?”

In your speech, you talked about how well-received you were as an observant Jew in the Arab world. Did that surprise you?

I’m not sure I was surprised, but I learned with each visit just how much more alike we are than we are apart and how much more willing they are to be open minded and accepting. And that doesn’t mean that all of a sudden we are going to create peace — it’s far more complicated — but on a human-to-human basis, the interactions were amazing. Palestinian, Saudi, Emirate — it doesn’t matter.

Are you hopeful about peace between Israel and the Palestinians?

I think they have a lot of very tough issues to work out. I don’t know if the two sides will come to agreement on those tough issues.

It sounds like you’re still not quite sure if it’s possible to achieve peace.

Do you think you brought Israelis and Palestinians closer to that goal?

I think we’ve gotten closer to creating a plan that both sides should take seriously. And if they really spend time on it and actually talk to each other, they could make progress. Will they do that? That remains to be seen.

Why hasn’t the peace plan been released yet? Will it be released before Israel’s third election this year?

I’m not in the White House, so I don’t know. And if I knew, I couldn’t tell you anyway. But I think they’re going through the analysis that we went through the two last elections and I think they have to make a decision. Is it going to help the peace plan to release it pre-election, or post-election pre-government, or is it not? I don’t know what the results of that analysis are.

What’s your proudest accomplishment and biggest regret from your time in the White House?

My biggest regret is not being there for the launch [of the peace plan]. That is a shame, but I do have a wife and children, so I had to return.

Proudest? I would say probably being part of the decision regarding the Jerusalem recognition, the embassy, the Golan, probably speaking at the United Nations Security Council in a way that needed to be spoken to it for years.

Did your view about the possibility of peace change?

I became more hopeful because of the interactions with ordinary Palestinians and Israelis, particularly the Palestinian side. The everyday people that I met and the everyday Arabs and the Arab leadership — not the Palestinian Authority, certainly not Hamas — gave me a lot more hope than when I went into the job.

What are your concerns ahead of the 2020 election, specifically as it relates to Israel or Jewish issues?

I think it’s hard to answer that question until we see who the candidate is on the Democratic side. [There are] a lot of candidates still left in the field. Some of them who would be probably very not helpful to Israel, others I’m not sure about.