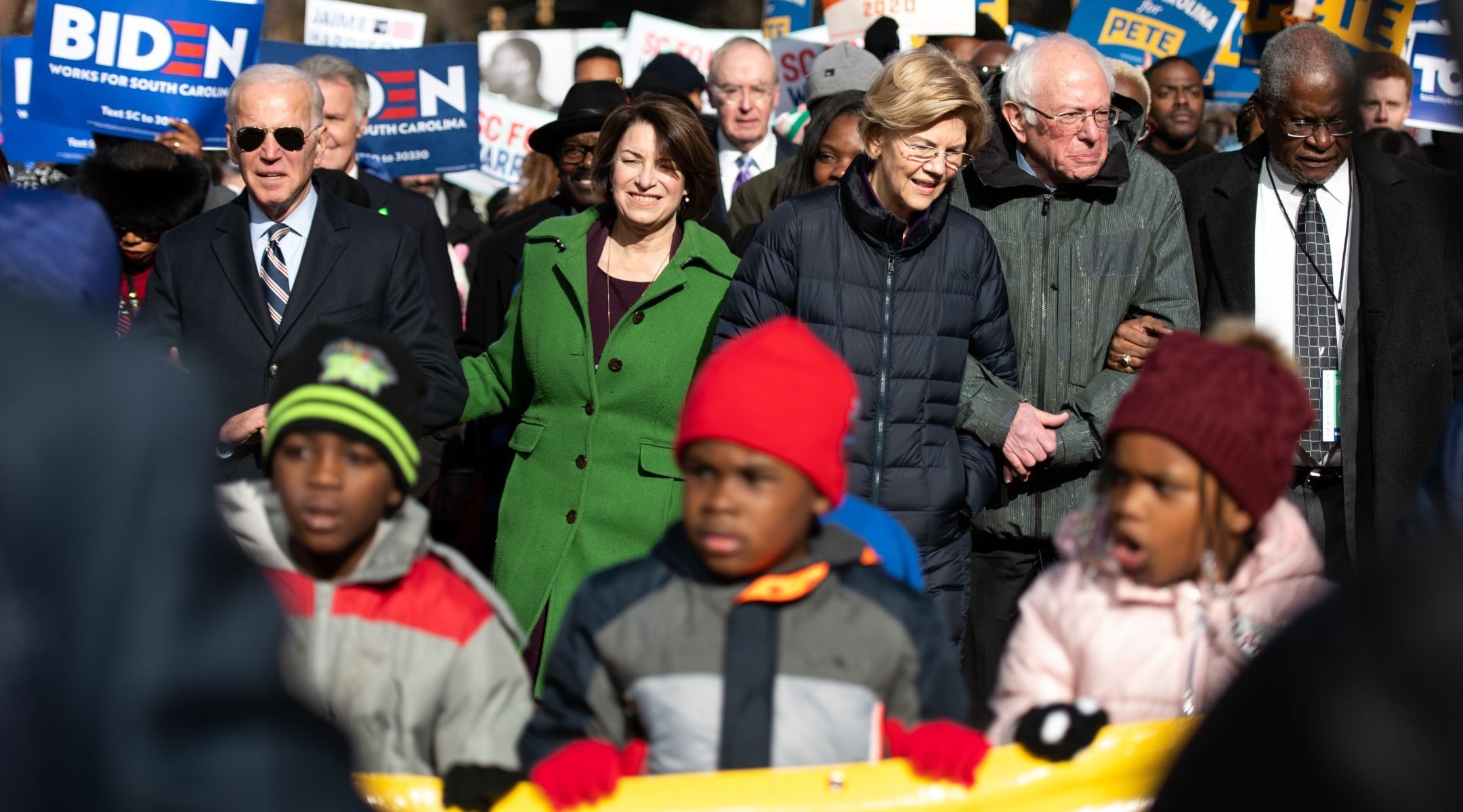 WASHINGTON (JTA) — The Democrats running for president have hewed to the party line in criticizing the Israeli-Palestinian peace plan rolled out by President Donald Trump: Unilateral annexation of settlements is the wrong way to go.

The tone was first set by House Speaker Nancy Pelosi and Senate Minority Leader Chuck Schumer, who each seized on the failure of the Trump administration to include the Palestinians in the peace process and the apparent green light that Israel gets in the plan to extend its law to West Bank settlements.

“The proposal that was presented today raises many questions,” Pelosi, a California Democrat, said Tuesday, “specifically regarding unilateral annexation, settlement freezes and lack of negotiations with the Palestinians.”

Schumer, a New York Democrat who is known for his closeness to the prominent Israel lobby AIPAC, said both sides should come to the negotiating table.

“Unilateral action taken by either side in response to the release of the Trump administration’s plan will diminish the prospects of a future peace,” he said.

That was the consistent response from candidates who chose to address the deal, and one of them, Sen. Elizabeth Warren of Massachusetts, pledged to reverse the effects of the plan. Here are their statements.

Warren: “Releasing a plan without negotiating with Palestinians isn’t diplomacy, it’s a sham. I will oppose unilateral annexation in any form — and reverse any policy that supports it.”

Joe Biden: “A peace plan requires two sides to come together. This is a political stunt that could spark unilateral moves to annex territory and set back peace even more,” the former vice president said. “I’ve spent a lifetime working to advance the security and survival of a Jewish and democratic Israel. This is not the way.”

Mike Bloomberg: “Every peace plan deserves a chance, but any viable plan requires buy-in from both sides, and over the past three years the president has done nothing but hurt the U.S.’s position as an effective broker in the Israeli-Palestinian conflict,” the one-time mayor New York said. “As this process unfolds it is critical that neither party take unilateral steps that could trigger instability and violence.”

Pete Buttigieg: “Peace requires both parties at the table. Not a political green light to the leader of one for unilateral annexation,” the former mayor of South Bend, Indiana, said.

Bernie Sanders: The Vermont senator objected to the plan, but not as a candidate — the message came from his Senate office.

“Any acceptable peace deal must be consistent with international law and multiple UN Security Council resolutions. It must end the Israeli occupation that began in 1967 and enable Palestinian self-determination in an independent, democratic, economically viable state of their own alongside a secure and democratic state of Israel,” he said. “Trump’s so-called ‘peace deal’ doesn’t come close, and will only perpetuate the conflict, and undermine the security interests of Americans, Israelis, and Palestinians. It is unacceptable.”

Sanders, Warren and Sen. Amy Klobuchar of Minnesota, another presidential candidate, joined a letter to Trump sent by 12 Democrats in the Senate expressing their “profound concern” over the plan.

“We write to express our profound concern regarding your decision to release a one-sided Israeli-Palestinian plan forged without any Palestinian involvement or support,” the senators said. “Unilateral implementation of this one-sided proposal will risk eliminating any remaining prospects for achievement of a peaceful and viable two-state solution.”