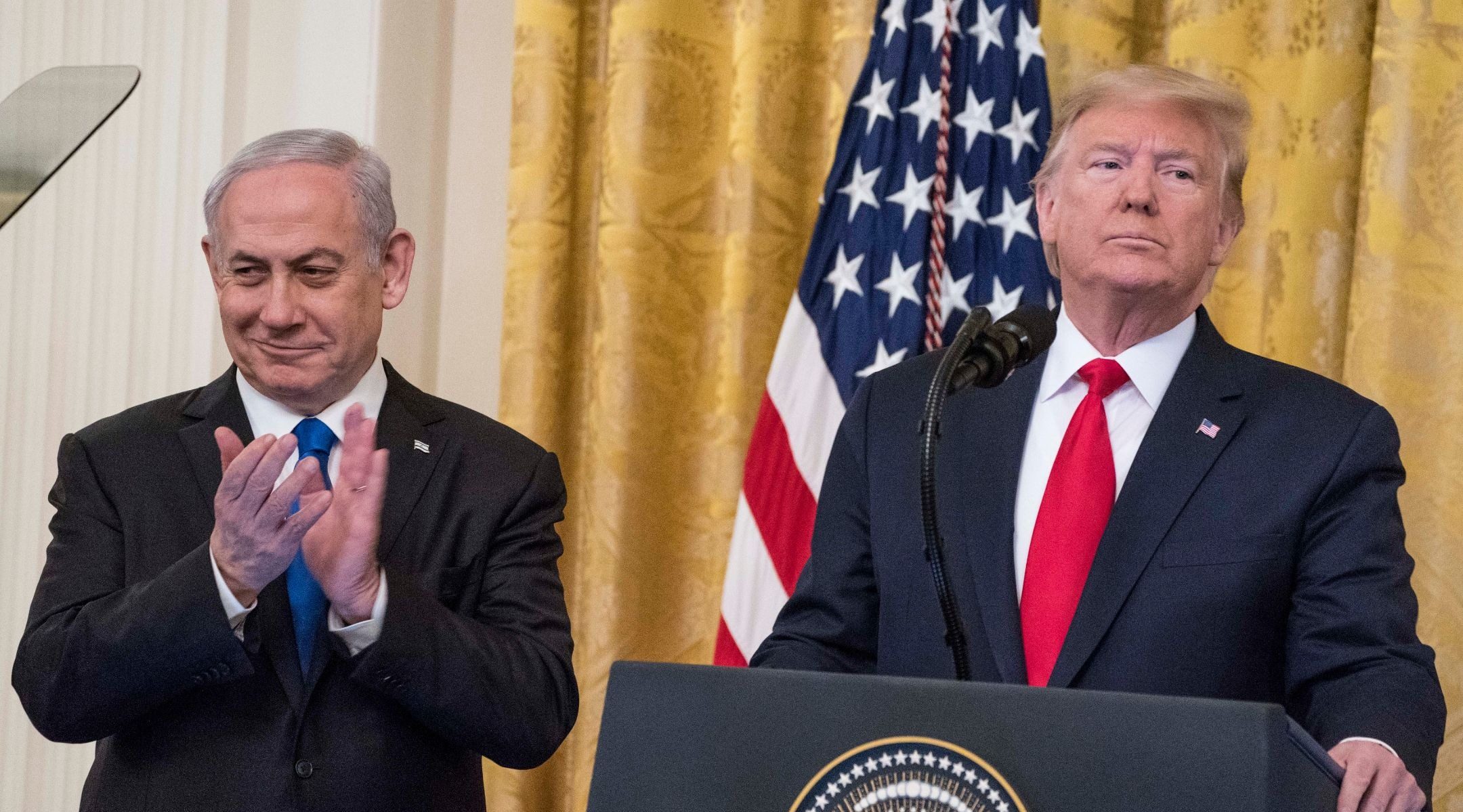 WASHINGTON (JTA) — “Jared Kushner,” Israeli Prime Minister Benjamin Netanyahu solemnly intoned to the young man whose bed he once borrowed, “without your wisdom, your persistence, your resolve, this day would have never come.”

The setting Tuesday was the White House’s East Room, adorned with portraits of first ladies past. To Netanyahu’s left was President Donald Trump, beaming at his son-in-law adviser for having delivered what Trump called a “great deal” and what Kushner had more modestly dubbed “a vision to improve the lives of the Palestinian and Israeli people.”

There were cheers. There may have been a few tears.

There wasn’t, however, a lasting sense of victory for Kushner.

Within an hour Netanyahu and Kushner, who has known the prime minister since the Israeli borrowed the teenage Kushner’s bedroom during a U.S. tour, were disagreeing on what comes next.

“There will be an extension of Israeli law into the Jordan Valley, the north of the Dead Sea and all the Jewish settlements,” Netanyahu told Israeli reporters after the White House meeting.

That would happen, he said, on Sunday with a vote at the weekly Cabinet meeting, and he used a memorable phrase: “The same law will apply in Tel Aviv as it does in Itamar,” one of the more far-flung settlements.

“I don’t believe that’s going to happen this weekend,” Kushner, who in recent weeks has been urging Netanyahu not to precipitously annex territory, said on CNN.

Even the terminology was soon contested.

“He got Israel to agree to a state!” Kushner told CNN of his father-in-law, pleading with pundits not to underestimate the breadth of Trump’s accomplishment.

Netanyahu did not mention the word “state” once in his briefing until he was prompted by a reporter.

“There are those who will call it a state,” he said. “I don’t object.”

His preferred term? “Conditional and limited recognition.” (Try fitting that on a coin.)

Kushner told CNN that his 181-page proposal would succeed where others had not because its detail mitigated vagueness. He may soon find out that when it comes to the Middle East, no amount of detail will control outcomes. Today’s peace vision may be tomorrow’s Palestinian state or next week’s fish wrapping.

Jared Kushner, winner or loser? A winner on Tuesday, maybe.

“I know how much the Jewish future means to you and to your family,” Netanyahu said at the White House. “Well, Jared, today you have helped secure that future.”

Down the line, not so clear. Already Tuesday there were protests in Middle Eastern capitals against the deal, suggesting that Kushner might end up being remembered as the man who foreclosed on this latest chance for Middle East peace.

The deal’s long-term consequences for the other major players remains similarly unclear. Here’s a look at some of the folks who may be triumphant or furious right now and for whom fortune might change.

Winner: In the middle of an impeachment trial, only the third in U.S. history, the president has pulled off Israel’s agreement to a deal with the Palestinians that would culminate in statehood.

“Today, Israel takes a big step towards peace,” Trump said at the rollout.

Trump made clear that a deal would help secure something he very much wants after three years of scandal: a legacy.

“Forging peace between Israelis and Palestinians may be the most difficult challenge of all,” he said. “All prior administrations, from President Lyndon Johnson, have tried and bitterly failed. But I was not elected to do small things or shy away from big problems.”

Potential loser: Trump might have to look for his legacy outside the Middle East. Palestinian Authority President Mahmoud Abbas gave the deal “a thousand no’s.”

Netanyahu primarily sees the plan as a means of consolidating Israel’s presence in the West Bank. At the outset of his meeting with Israeli reporters, he enumerated more than 20 outcomes of the plan that he depicted as positive for Israel. None of them included the word “peace.”

Asked about the likelihood of the plan leading to peace, he said, “Will the Palestinians even agree to a modicum of this?”

As a distraction from impeachment, the rollout Tuesday lasted just a few hours. That evening, Senate Majority Leader Mitch McConnell, R-Ky., told colleagues that he could not block witnesses from testifying. That likely will lead to an appearance by John Bolton, Trump’s former national security adviser, who is ready to testify that Trump conditioned aid to Ukraine on that country investigating the president’s political rivals — the crux of the impeachment case.

Winner: Netanyahu told Israeli reporters that the proposal was a “historic breakthrough”: Israel’s eastern border would finally be determined as the Jordan River; Israel would have absolute security control over the entire area now encompassing Israel, the West Bank and the Gaza Strip; no settlers would be removed from their homes; and the Trump administration would block any international blowback, including sanctions on Israel.

Not only that, the prime minister said, Israel gets those goodies upfront while the Palestinians have to prove themselves before they get anything.

The conditions include recognizing Israel as a Jewish state, stopping payments to families of terrorists, ending any actions targeting Israel in international courts and asking Israel’s permission to join international bodies. The limitations to which Netanyahu referred are on Palestinian sovereignty, particularly related to Israel’s continued control of the air, land and sea, as well as all passages in and out of the area.

Potential loser: Netanyahu had to be prompted by reporters to acknowledge it, but he made considerable concessions in accepting the deal. Even if the plan does not culminate in a Palestinian state, its terms will linger.

Netanyahu has agreed to a plan that would have a Palestinian capital in eastern Jerusalem, something he swore would never happen. (If the capital came to be, he told Israeli reporters, would reside in the portion of Jerusalem outside the security barrier.) He has committed to a four-year settlement freeze in the 70 percent of the West Bank where Israel would not extend its law, a prospect that has deeply concerned some settler leaders.

Netanyahu also is the first Israeli leader to agree to a deal that would swap some lands within the 1949 borders with the Palestinians — bordering the northern West Bank and along Israel’s border with Egypt. That’s an astonishing concession however its spun, and one that would roil Israelis in or near those regions.

Yet Netanyahu wants to dive right into accepting the plan. His rival in the March 2 elections, Blue and White party leader Benny Gantz, has praised the plan but has also said it is best considered following the vote, when a government is securely in place and can consider the agreement more carefully. Gantz in a statement said Netanyahu, under indictment for corruption, might not be in the best frame of mind to strike a deal.

“In order for implementation to be possible, Israel must move forward to a strong and stable government, led by an individual who can direct the fullness of his time and energy toward ensuring that country’s security and its future,” Gantz said. “Rather than by a defendant facing serious charges of bribery who would be entirely steeped in his personal and legal interests.

Loser: The Palestinian Authority president was handed the prospect of a state with limited sovereignty and scattershot over the Gaza Strip — which he does not control — and two-thirds of the West Bank, a long climb down from the state he once contemplated in the entirety of the West Bank and the Gaza Strip. It may be his last best chance — something Kushner said again and again in his CNN interview, calling his proposal the “last chance” for a Palestinian state.

If the Palestinians reject this proposal, Kushner told CNN, “they’re going to screw up another opportunity, like they’ve screwed up every other opportunity that they’ve had in their existence.”

Kushner says an incentive for the Palestinians is the economic plan he released last year that called for $50 billion of regional investment in Palestinian areas. Since then, however, few pledges have materialized.

Potential winner: Trump can’t pull off this deal without Abbas, which he has acknowledged.

“President Abbas, I want you to know that if you choose the path to peace, America and many other countries will — we will be there,” Trump said Tuesday. “We will be there to help you in so many different ways.”

In other words, Abbas has leverage. In order to maintain it, he will have to consign the plan to pariah status until changes are made.

He may be off to a good start. Trump and Netanyahu were hoping for a Sunni Arab buy-in as a means of pressuring Abbas. But the Arab states most critical to the plan’s success — Saudi Arabia, Egypt and Jordan — did not send their ambassadors to the ceremony. Instead, three ambassadors from Oman, the United Arab Emirates and Bahrain were there. Each country has longstanding semi-official relations with Israel. Oman and Bahrain are tiny and lacking influence in the broader Arab world.