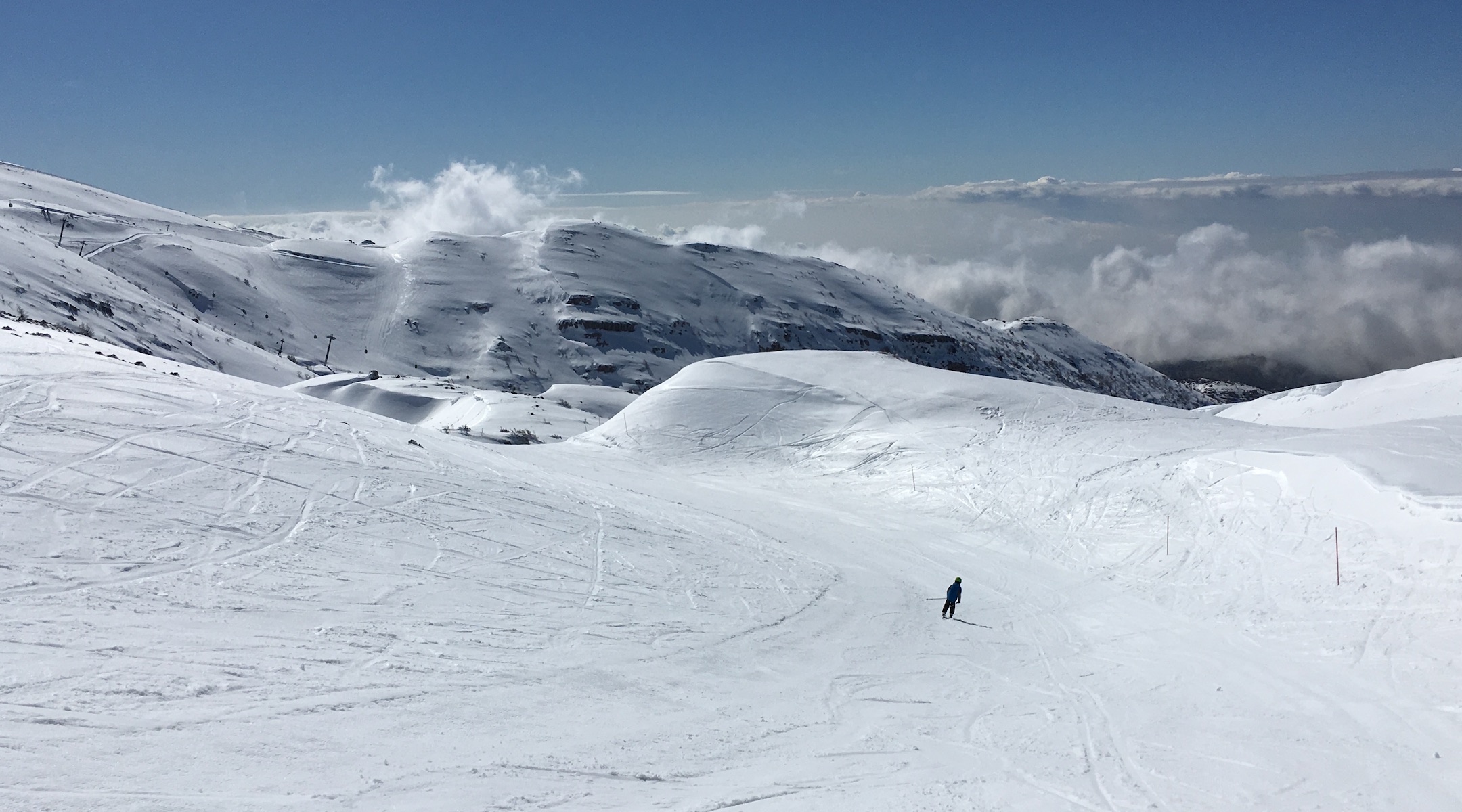 The top of the Hermon ski area, at 6,600-foot elevation, offers expansive views of the valley below. (Uriel Heilman)
Advertisement

MOUNT HERMON, Israel (JTA) – Standing on a peak atop Israel’s highest mountain on a dazzlingly bright February morning, I had just stepped into my skis and begun to descend when I heard someone yelling in my direction.

A soldier clutching an automatic weapon was running after me.

“Hey! You can’t go that way,” he shouted. “That’s a closed military zone.”

Welcome to Israel’s only ski area, wedged into the northernmost corner of the Golan Heights along the Syrian border at an elevation of 6,600 feet.

Soldiers manning the chairlifts are just one of many elements that make Mount Hermon unique. Security guards check bags at the entrance. The ski instructors are Druse villagers from nearby Majdal Shams, a town captured from Syria in the 1967 Six-Day War and where residents still pledge loyalty to Bashar al-Assad. The Hermon’s CEO is a retired one-star general who spent 32 years in the Israel Defense Forces, mostly in the Northern Command, before taking his first snow job.

The mountain only has about a dozen trails. Most visitors come not to ski but just to experience the snow — a rarity in this Mediterranean country. Unlike U.S. resorts, the Hermon doesn’t make artificial snow, so on any given winter day, skiing might not be possible due to insufficient snow cover. Two seasons ago, during an unusually warm winter, the Hermon was open to skiers for just 13 days.

And when the snow does fall, the Hermon does the opposite of what skiers might expect, or hope: It shuts down.

“Israelis are not used to driving on the snow,” explained Micki Inbar, a spokeswoman for the ski area. “As long as we cannot be sure that they can drive safely, we cannot open the resort.”

The only route to the Hermon is a steep, windy road filled with hairpin turns that gains some 5,400 feet in elevation over the course of 15 miles, from sea level in the Galilee’s Hula Valley to the base lodge of the ski area. The white-knuckle drive is intimidating enough in perfect weather. When clouds roll in and visibility drops to near zero — as it did when I visited – it’s so terrifying that even Israel’s notoriously reckless drivers slow to a crawl.

For hard-core skiers, however, the Hermon is well worth the trip.

For one thing, there’s the cool factor. The experience of finding deep powder in Israel, where even for most of the winter there’s not a single snowflake to be found anywhere else in the country, is immensely satisfying. 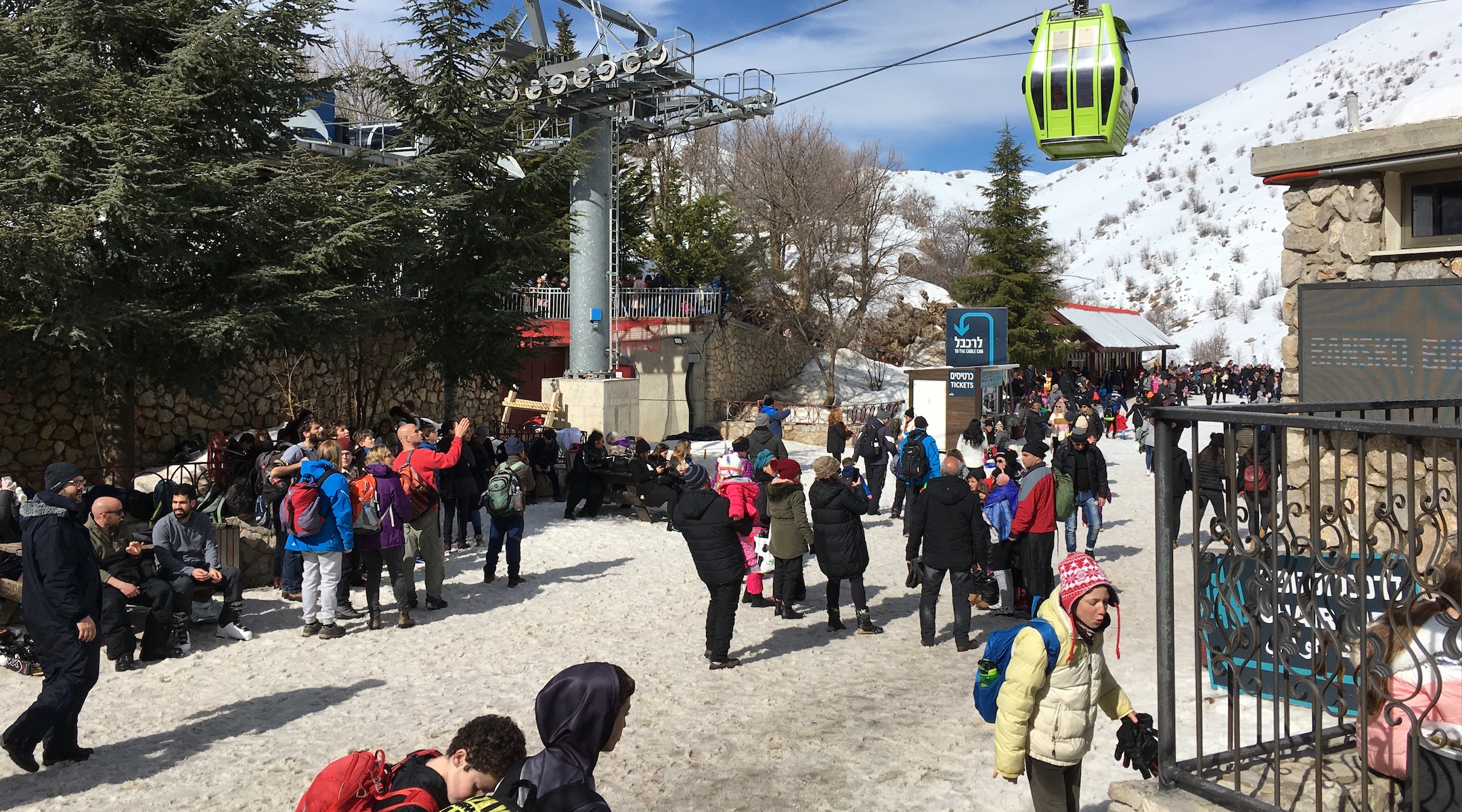 Visitors at the Hermon, Israel’s only ski area. (Uriel Heilman)

For another, the skiing’s actually quite good. The Hermon isn’t huge, but there’s enough terrain to satisfy even expert skiers for a day or two. The ski area has four double chairlifts, a new gondola with neon-green cabins and a bunch of rope tows spread out over 28 miles of trails with a 1,300-foot vertical rise from base to summit. Last year, conditions were such that the ski area was able to open for 53 days during the winter.

The Hermon’s most remarkable feature is its breathtaking views. The Israeli-controlled part of the mountain reaches a height of 7,300 feet, with the ski summit at 6,700 feet. That’s taller than the highest peak in the Northeastern United States and often above the clouds. (The mountain’s highest point is in Syria.) While ski resorts in the Rockies are almost twice as tall, they don’t have a vertical view anywhere near the Hermon’s 6,700 feet.

Rising like a white monster over the verdant valleys of the northern Galilee, this mountain of vital strategic importance to the Israeli military is often referred to as “the eyes of the country.” It’s also less than three hours from Tel Aviv.

Those who come to the Hermon to ski are a mixed bag. Some are experienced skiers who love the Alps but seize opportunities to ski locally when they hear of good snowfall. Many are novices interested in trying out the sport or improving their skills. There are also plenty of recent immigrants or overseas students from colder climes curious to see what the Hermon is all about.

Most of the Hermon’s visitors, however, don’t ski at all. They just come to experience the snow.

If you’re a good enough skier to ascend above the chaos and crowds in the mountain’s beginner areas, you’ll find plenty of virgin snow in the Hermon’s higher reaches. Because much of the skiing is above the tree line, you can traverse your way down in wide open snow fields.

Signs at the resort make clear that skiing off-trail is forbidden. But like any Israeli, I ignored the rules, and with no negative consequences. The best skiing can be found off the trail, where snow lies untracked even days after storms. Just watch out for boulders and tree shrubs, and try not to inadvertently ski into Syria: The border in this area is unmarked.

“It’s not possible to accidentally ski into Syria because of the topography,” Inbar said. “In order to do that, you’d have to climb up the mountain and ski down.”

Of course, hardy skiers all over the world do that to access fresh powder. At the Hermon, it’s not advisable. There is a civil war on in Syria, after all.

While I didn’t hear any mortar fire during my visit to the mountain, I did hear plenty of shrieks of terror – mostly from novice skiers and snowboarders who didn’t seem to have the faintest clue about what to do. One visitor who clearly had given up any attempt to make it down upright slid down the slope on his belly, limbs and poles splayed out like a spatchcocked chicken.

Not far away, a group of alpine soldiers wearing white camouflage snowsuits and black automatic weapons made tentative S-turns behind an instructor, their progress halted when one plowed into another and knocked him to the ground. Israel’s special alpine unit was founded to ensure that Israel can defend this strategic mountain even in extreme situations — like a James Bond-style battle on skis. However, their lack of skiing prowess begs a question for the IDF brass: Is it easier to teach an experienced skier to shoot or one of its soldiers to ski? 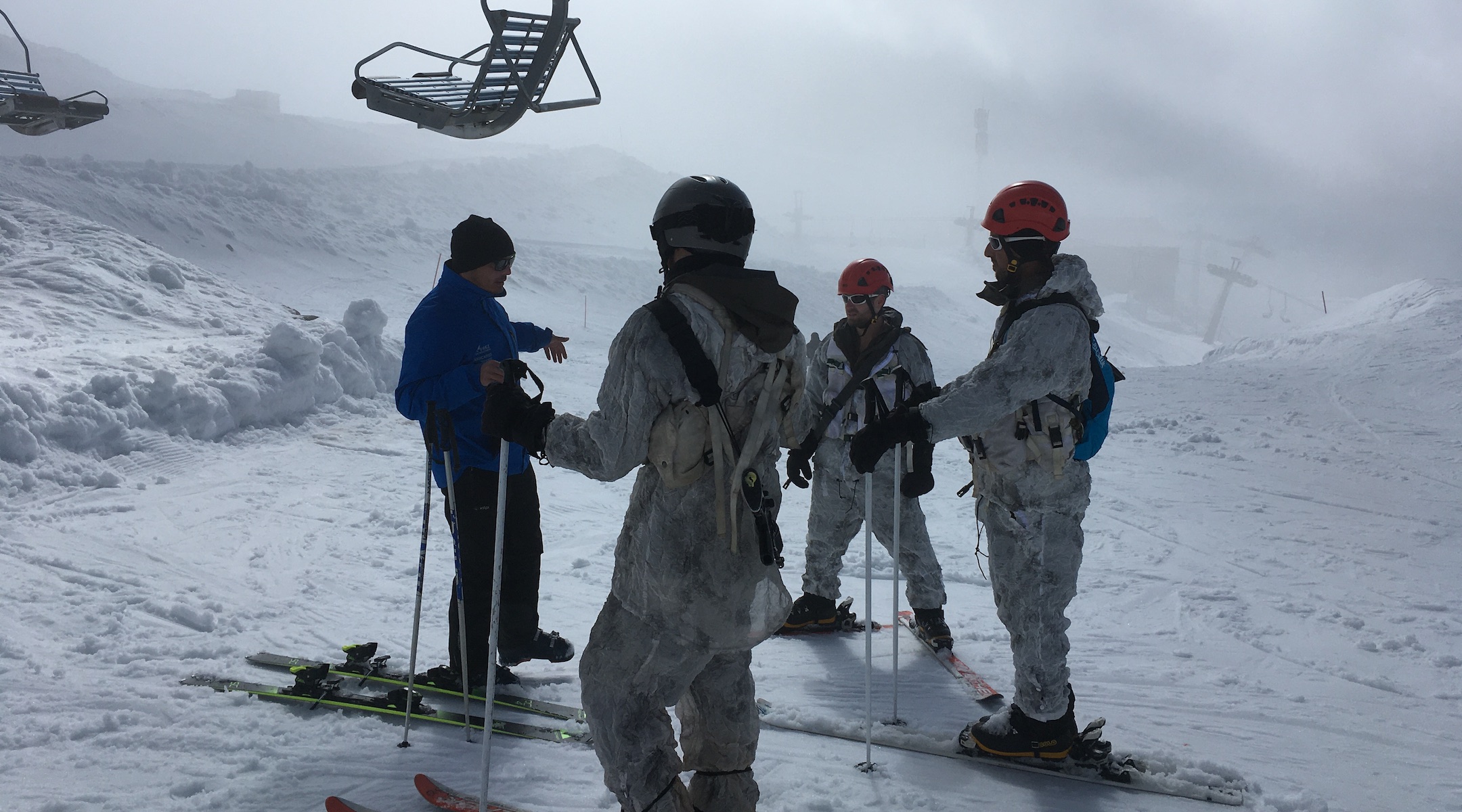 At the base area, barely controlled mayhem reigns, the noise and cacophony of the souk transplanted to the alpine tundra. But everyone seems to enjoy themselves. The sledding hill was so jam-packed when I visited that inflatable bumpers were used to separate the downhill sledders from the uphill climbers. In the learning area, first-timers struggled to keep hold of the rope tow. On the line to the gondola, added last summer, visitors jabbered away in Hebrew, Arabic, French and Russian. There’s also an alpine slide open year-round.

If you’re looking for a slopeside condo for your visit, think again: There’s no hotel. Because the Hermon is a military zone, only soldiers can sleep over. The closest Jewish Israeli town is Neve Ativ, where hotels can run $350 per night. When I searched for affordable area lodging, I thought I’d gotten lucky until I realized that the decently priced B&B I found just five miles away was located in Lebanon. Neve Ativ is also home to the 32 families who own the Hermon, a privately operated corporation.

The Hermon’s CEO, Alon Friedman, has a long wish list for the Hermon. He wants to expand the ski area into new terrain, find ways to make artificial snow despite the insufficiently cold temperatures and significantly increase non-skier visitors, especially during the summer.