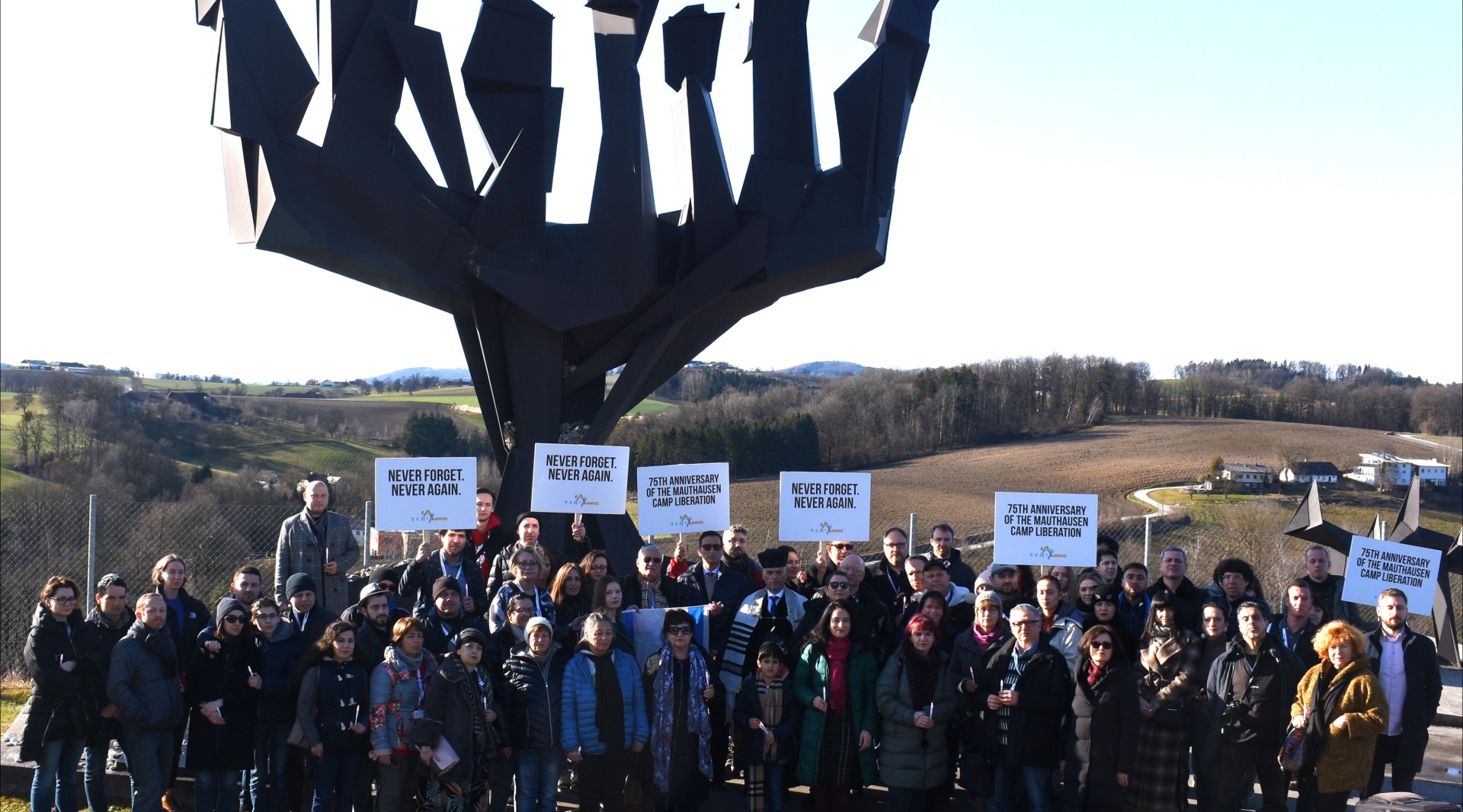 MAUTHAUSEN, Austria (JTA) — Under a bright blue sky, with Austria’s snow-capped Alps in the distance, Racheli Kreisberg set foot for the first time in her life inside Mauthausen — the sprawling Nazi concentration camp that held nearly 200,000 prisoners between 1938 and 1945.

Fewer than half of the inmates sent here survived World War II. One of them was Kreisberg’s grandfather, Simon Wiesenthal — an architect by profession who later would become the world’s most celebrated Nazi hunter.

On Sunday, Kreisberg led a moving ceremony to mark the 75th anniversary of the camp’s 1945 liberation by U.S. forces. The event at Mauthausen — a two-hour drive west of Vienna — capped a weekend of Jewish learning, culture, music and socializing organized by Limmud FSU, a Jewish educational organization that brings together Russian-speaking Jews throughout the globe. This was the second time that the organization, which was founded in 2006, held a Limmud FSU festival in Western Europe, following an event in London in 2017.

Holding aloft signs reading “Never Forget, Never Again,” participants marched silently past the barracks that housed prisoners — Jews as well as non-Jews from 28 countries — and beside solemn memorials erected after the war by the governments of some of those countries, including France, Italy, Spain, Luxembourg and the Soviet Union.

Arriving at a 16-foot high, black stainless-steel menorah erected in memory of the 38,120 Jews who died at Mauthausen, the group lit candles as the chief cantor of Vienna, Shmuel Barzilai, sang “Ani Ma’amin” (I Believe) and chanted prayers for the 6 million victims of the Holocaust.

“In February 1945, my grandfather arrived here, the last station of the death march,” said Kreisberg, 53, who flew in from Israel for the commemoration. “Upon his arrival, he was too weak and ill to work in the stone quarries, so he was sent to the so-called camp hospital, the place to die. But against all odds, he survived, weighing only 35 kilograms” — 77 pounds.

Soldiers of the 11th Armored Division of the Third U.S. Army liberated the camp on May 5, 1945. After the war, Wiesenthal offered to help the Americans identify Nazi perpetrators and their collaborators. Reunited with his wife, Cyla, who had survived forced labor in Germany, Wiesenthal, then 37, moved to the nearby city of Linz and began his life’s work.

“One of the first apartments where he lived, in Linz, was located on the same street as the wife of Adolf Eichmann. This was the beginning of a 15-year-long search for the architect of the Final Solution — the massive, planned attempt to exterminate all the Jews,” Kreisberg said.

“He also contributed significantly to combat Holocaust denial by searching and identifying the policeman who arrested the family of Anne Frank in Amsterdam,” she said, referring to Karl Silberbauer. “In the course of his 96 years of meaningful life, Simon Wiesenthal brought 1,100 Nazis and collaborators to justice.”

Wiesenthal died in 2005. Both the Los Angeles-based Simon Wiesenthal Center and the Vienna Wiesenthal Institute for Holocaust Studies are named for him. 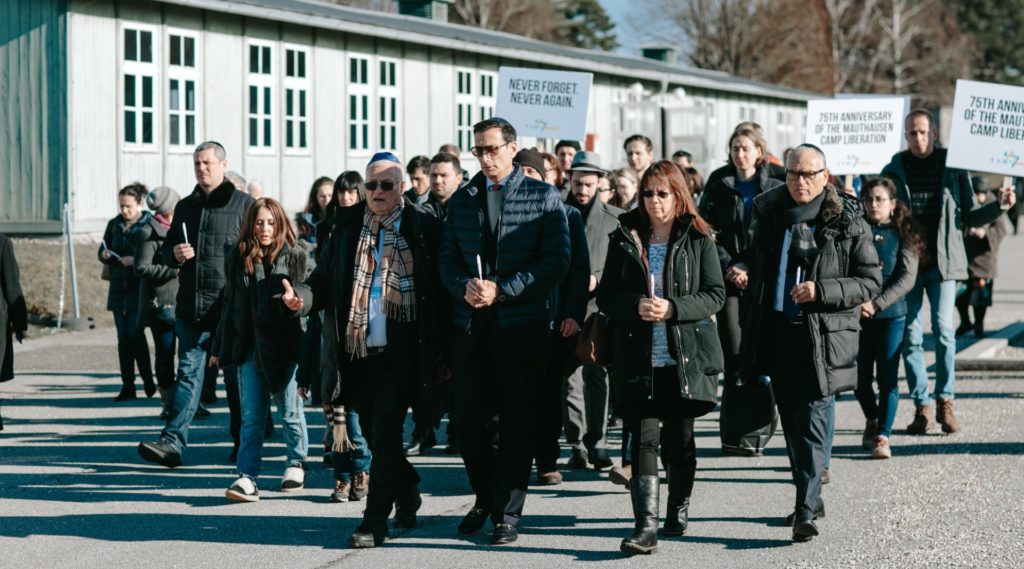 At a ceremony marking the 75th anniversary of Mauthausen’s 1945 liberation by U.S. forces, participants marched silently past the barracks that housed prisoners, March 1, 2020. (Yevhen Zavhorodnii)

“We are here today to honor the memory of Simon Wiesenthal and to mourn the loss of so many innocent victims,” Chaim Chesler, founder of Limmud FSU, said at Sunday’s ceremony. “We at Limmud FSU are proud to commemorate his life’s work after the war in his pursuit of Nazi criminal, and his devotion to exposing them and tracking them down.”

“He was brought to Auschwitz at the beginning of the war. He was only 14,” said Ioffe, who was born in Belarus but lives in Germany, where she’s active in Limmud FSU. “The Nazis made him decide whether to go with his mother or his father. He said he would go with his father; this was also his mother’s choice. He was lucky. If he had stayed in Auschwitz, he would have died.”

This was the second visit to Mauthausen for Ioffe, a 31-year-old scientist; the first was in 2017.

“I didn’t expect to come back to this place, but some people in our group had never visited,” she said. “I’m full of emotions today — sad, of course, but also happy to meet Racheli Kreisberg and proud that some people like our grandfathers survived, and that life goes on.”

New York businessman and philanthropist Matthew Bronfman, the chairman of Limmud FSU, used the occasion to condemn the indifference of world leaders and ordinary people who turn a blind eye toward anti-Semitism in Europe today. 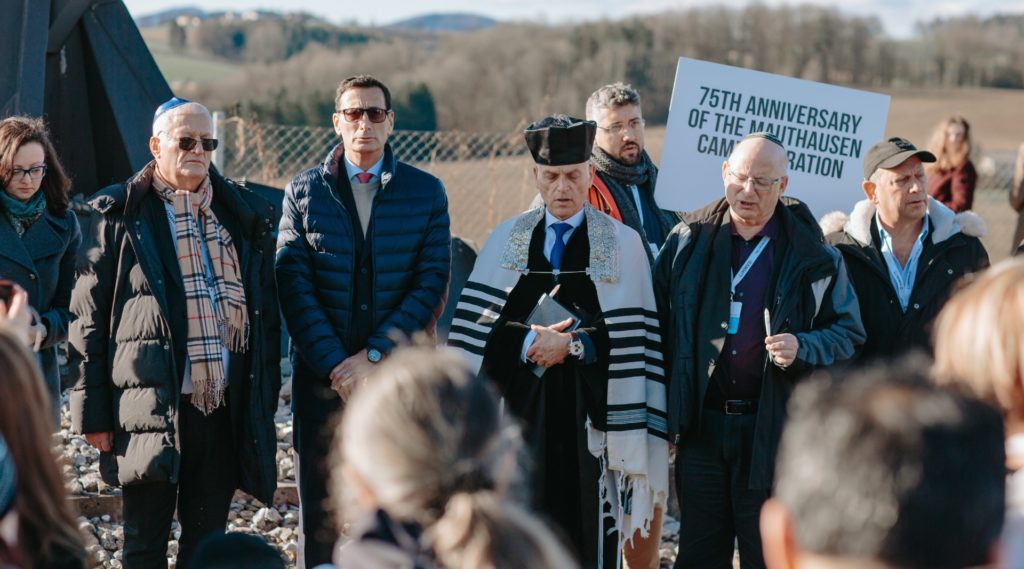 “For evil to flourish, it only requires good men to do nothing,” said Bronfman, quoting the famous adage. “Standing here today, at the outskirts of the lively market town that goes by the same name as this dreadful place, watching over the picturesque villages residing on these beautiful hills, one cannot truly comprehend how so many others chose to stand on the sidelines of history, doing nothing and saying nothing.”

He added, “And so, this is one of the important lessons we can learn: to do everything in our power to educate the future generations. Never stand aside while injustice is taking place in front of you. Always take sides, and always speak up.”

Bronfman ended by quoting another Holocaust survivor, writer and Nobel Prize laureate Elie Wiesel. Joel Rappel, a close friend of Wiesel and the founder of his archive, was among the participants in Sunday’s ceremony.

“‘We must always take sides. Neutrality helps the oppressor, never the victim. Silence encourages the tormentor, never the tormented. The opposite of love is not hate, it’s indifference,’” he said. “Never forget. Never again.”