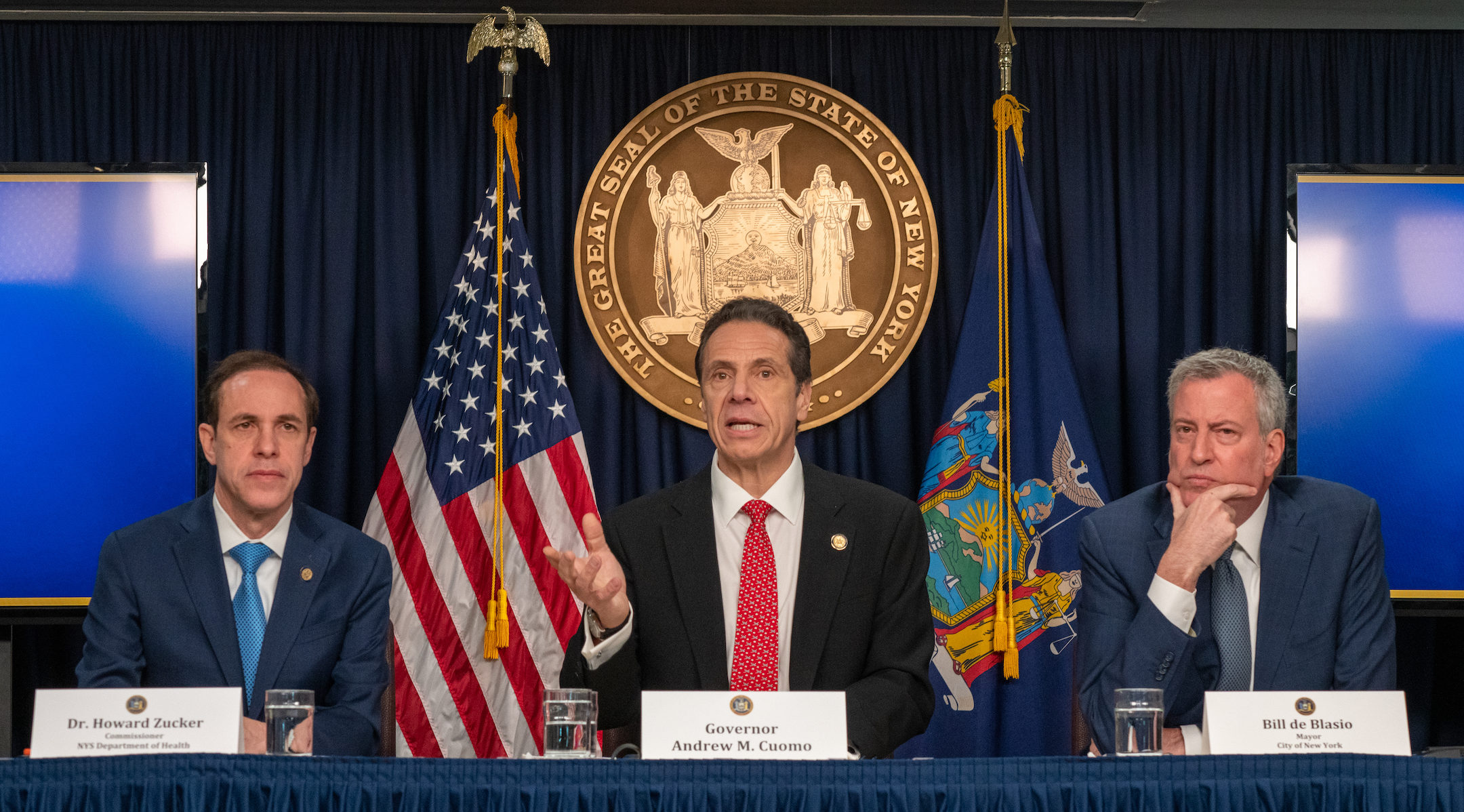 We are no longer updating this story. Find all of our latest coronavirus coverage here.

9 p.m. Three more members of the SAR school community have tested positive for the coronavirus, school officials informed community members Thursday evening. The newly diagnosed individuals include two parents and one high school student. The school, which closed earlier this week until at least March 11, has been holding classes virtually.

1:37 p.m. Gov. Andrew Cuomo urged New Yorkers to remain calm as he announced 11 more cases of the new coronavirus in the state. At a press conference Thursday, he said the condition of the Orthodox attorney from Westchester who was hospitalized with the virus is “improving.”

Eight of the new cases are in Westchester, and are connected to the Westchester man. Two additional ones are in New York City and one is in Nassau County on Long Island. Of the 22 total cases in the state, four are hospitalized.

Cuomo repeatedly likened COVID-19, the disease resulting from the virus, to the flu. He said New Yorkers should expect the numbers of infected people to rise as the state conducts more tests for the disease.

He said that likely upwards of 1,000 people remain in voluntary self-isolation due to “an abundance of caution.”

9:30 a.m The Jewish Federations of North America, an umbrella group for local communal organizations, announces the cancellation of two upcoming group trips — one to the Balkans and Paris, and the other to St. Petersburg, Russia. It is evaluating whether to cancel another upcoming group trip to Israel and the West Bank.

And SAR High School announced it would remain closed through Purim on Tuesday, March 10 and will open the next day. SAR Academy, the lower school, will open on Monday, March 9.

5:20 p.m. Yeshiva University president Ari Berman shared that Yeshiva University will be cancelling all in-person classes and scheduled events at both the Wilf Campus and Midtown location until after Purim. Students are discouraged from congregating in large areas, though the campus batei midrash — study halls for traditional Jewish religious texts — for now will remain open. Dorms and food services will remain open.

Yeshiva University’s annual Red Sarachek Basketball Tournament for Orthodox high schools across the United States and Canada, scheduled for March 12 through 16, has also been postponed.

4:40 p.m. Another family in New Rochelle has tested positive with coronavirus, Governor Cuomo confirmed at a press conference.

The cases are all in a single family from New Rochelle: A 46yo woman, her 45yo husband, and 3 of their children.

The entire family is under self-quarantine.

10:30 a.m. In greater New York City, four Jewish day schools have temporarily closed, while 600 congregants of an Orthodox synagogue and two university students have been required to self-quarantine as a result of the coronavirus.

All classes at the Wilf Campus in Upper Manhattan were canceled for the day, including graduate courses and the boys’ high school.

The YU student who tested positive has not been on campus since Feb. 27, the university told students and staff on Tuesday.

The afflicted father also has at least one child who attends the Modern Orthodox day school SAR Academy in the Riverdale section of the Bronx.

At a news conference Wednesday, New York Gov. Andrew Cuomo shared that the man’s wife, daughter and neighbor had tested positive for the virus as well, and that the son who attends YU had been symptomatic prior to his father’s hospitalization. He provided no details on the son’s condition.

The attorney was one of two reported cases of coronavirus in New York as of Tuesday afternoon.

SAR, Westchester Day School and Westchester Torah Academy have all closed temporarily due to possible coronavirus exposure, and Temple Young Israel in New Rochelle, also in Westchester, is being required to halt its services immediately. The state is requiring self-quarantine for congregants and those who have attended recent events at the synagogue.

In Orthodox communities, men are required by Jewish law to pray with a quorum of at least 10 men three times daily, so synagogues typically offer several daily services during the week in addition to Shabbat and holiday services.