We asked, you answered: JTA readers’ stories of their own political evolution 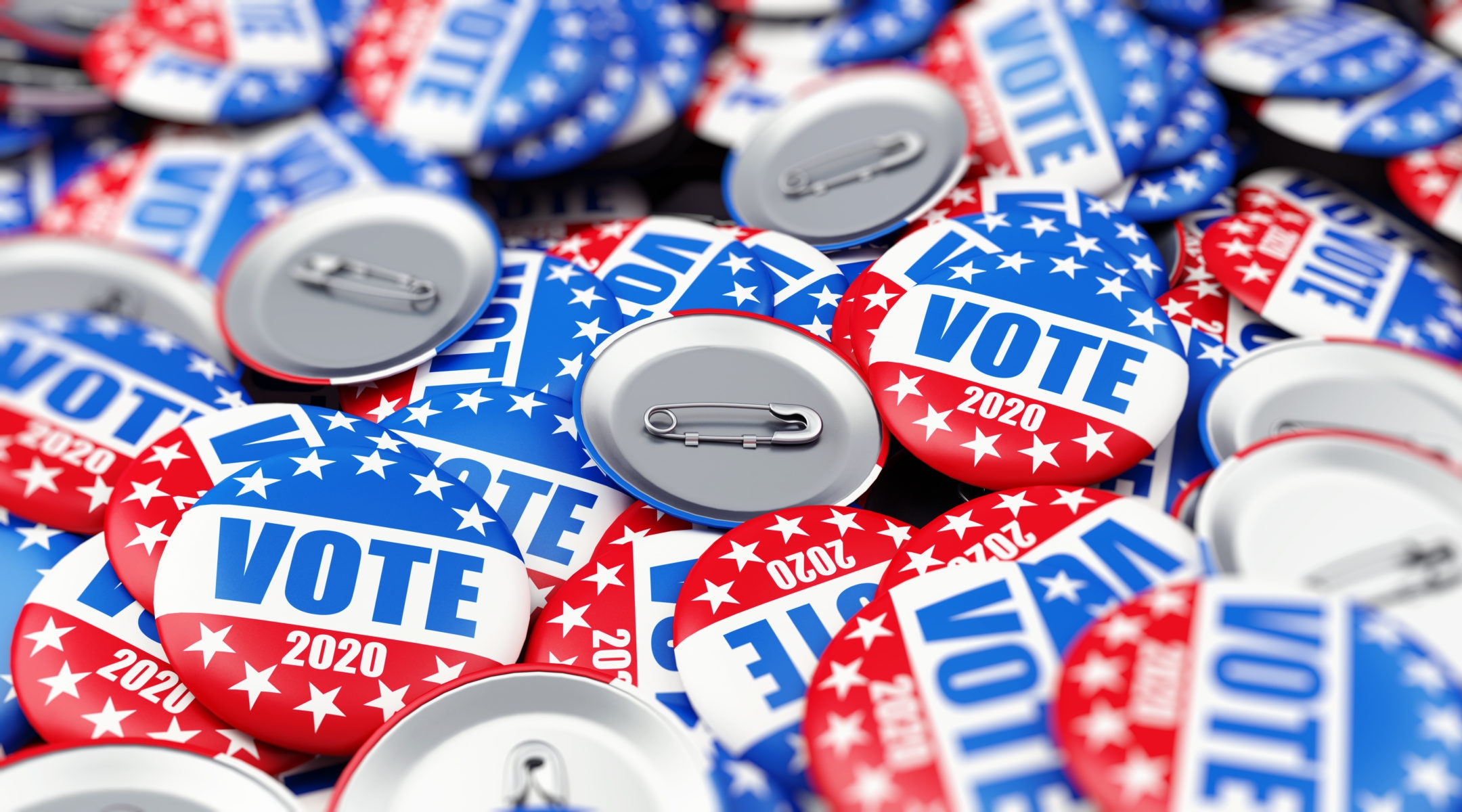 NEW YORK (JTA) — When we published a deep dive last month on how Orthodox Jews became Republicans, we knew our readers would have a lot to say.

Still, we were surprised by the quantity and depth of the responses we received to a survey asking readers to share their own Jewish political evolution stories. Nearly 150 people submitted recollections imbued with emotion, intellectual grappling and personal reckoning.

Their stories reflect the vast diversity of the Jewish world, politically and religiously. We heard from people who saw themselves in the trends we documented, and from others who said their Jewish political evolution ran the other way. Still others told us that being Jewish meant they don’t feel perfectly at home anywhere on the American political spectrum.

In short, the American Jewish political experience is as complicated as the rest of the country’s. Now, as Jews in 14 states head to the polls on Super Tuesday, we’re sharing a selection of the stories you told us.

Responses have been lightly edited for length and clarity.

“Although I am still very concerned with the environment, the poor, education and all of the other ‘liberal’ values, the Democratic Party’s continuing move away from Israel finally made me wake up. For the first time since 1974, I voted Republican in the last election — and with the current crop of people running now, I changed my party listing for this election cycle to Republican. The Democrats have lost me.” — Charles Feinstein, 63, Pennsylvania

“A fervent Democrat who volunteered for the early Project Headstart program while still in school, I have watched as the party which aligned with my social values has been hijacked by left-wing socialists and the politically correct police. I have changed my party affiliation to Republican and have been proud to support the incumbent president as he offers Israel the first real opportunity to raise its head safely among those opposed to Jewish political equality.” — Dorene Richman, 72, New Jersey

“My mentor Rav Noah Weinberg (of blessed memory) always maintained that we should vote for what’s best for America. If Americans are happy, they will naturally support Israel. If they are miserable, they will turn against Israel and Jews. Trump and the Republicans have a message of moral stability and economic responsibility which appeals to the majority of Americans. He and they have my support and the support of the vast majority of my Orthodox community.” — Rabbi Alon Tolwin, 68, Michigan

“I grew up in a Democrat household in which Republicans were considered anti-Semitic. While serving in the IDF while Carter was president in the U.S., I started to open my eyes. The Democratic Party was no longer the Democratic Party of my parents. I was already a conservative with Israeli politics, but seeing the direction of the Democratic Party and the new direction of the Republicans that were much more friendly towards Israel. Opening my eyes, my entire outlook and ideology in both Israel and U.S. policy and politics has become very conservative. My only concern is that the extreme right that seems to be anti-Semitic is often associated with all conservatives.” — Lou Krupkin, 62, New Jersey

“In college at Brandeis in the 1960s, I was a radical leftist. I belonged to SDS, marched on the Pentagon, and despised all Republicans. When I saw that the two leaders of our SDS chapter couldn’t say a decent word to each other, I realized that leftist love for the poor Vietnamese peasants was hypocrisy. It’s easy to love people you don’t know and don’t have to live with. I remained a devoted liberal until, in 1985, I moved to Israel. Seeing the facts on the ground, and how the left-wing media was telling outright lies about events I had actually witnessed, I moved to the right wing. I am an Orthodox Jew (after spending 15 years in an Indian ashram), and I don’t like Trump’s character traits or marital record, but I LOVE what he has done for the State of Israel and Jerusalem. Thanks to his Jewish daughter and Orthodox son-in-law, Trump is the first U.S. president who actually understands what is going on here in Israel.” — Sara Rigler, 72, Jerusalem (votes absentee in California)

Orthodox Jews for whom the trends didn’t apply

“I grew up with politically unaffiliated parents. But as I became much more politically informed and involved, I became disgusted by the racism, sexism and prioritizing of Israel at the expense of America I so often encountered in high school, summer camp, and Yeshiva University. I was infuriated by the entitlement of Israeli relatives and friends who assumed we’d vote in their interests. My voting Democrat now is partially about my own Jewish values, but more so about pushing back against the narrative of blind obedience to the GOP, which enables and encourages the worst social prejudices all too often found in Orthodoxy.” — Sara, early 20s, New York

“I’ve gone from being a firm Democrat to merely being ‘Democratic-leaning’ over the past decade, and I feel like I’m nearly politically homeless. I can’t bring myself to vote for Republicans, particularly in the age of Trump, as their ethic is selfish, nativist, misogynistic and irresponsible. But I perceive the Democratic Party to be increasingly less friendly to Jewish interests. Barack Obama, who was on balance a great president, sometimes didn’t see eye-to-eye with the Jewish community, but usually seemed to try to be attuned to Jewish sensibilities. But now, the Democrats appear to be the party of Bernie Sanders and ‘the Squad,’ who are skeptical of Israel at best, occasionally lapse into (or wink at) outright anti-Semitism, and take their Judaic cues from a minority of far-left Jewish groups. The progressive movement wants Jews to sacrifice the substance of their Jewishness for other political goals. It’s dispiriting.” — Adam Glantz, 45-54, Virginia

“I grew up in Europe and attended schools in Europe and Israel. My parents are American. They always had Israel in mind when discussing American elections, so when I moved to the U.S. at age 20 I automatically supported Bush and wrote a little-read blog supporting him, decrying the ‘Islamisation of Europe’ and so on. The change began when I started watching Jon Stewart’s show. I knew he was a comedian and satirist, but his analysis was biting and showed real news in a different light. It became apparent to me that there were no WMDs in Iraq and not all Muslims were out to get us. He opened my eyes to the fact that Hannity, Limbaugh and Savage, among others, got famous by instilling fear and uncertainty in their listeners which increased divisiveness and xenophobia. Many of their listeners were in the Chabad community I am part of — they all had talk radio on in their cars. I voted for Obama in 2008.”  — E.H., 35-44, New York

“It has mostly *not* changed, but my community has changed around me. I’m still a left-of-center, moderate Democrat (I would support Biden, Bloomberg or Klobuchar). Overall, I supported Obama, but was distressed with many of his policies toward Israel. With Trump, it’s the opposite: I cannot tolerate anything about him, but he has done some good things regarding Israel. But I don’t think that matters too much, in part, because his climate change non-agenda is going to destroy the world in any event. This is one of the main reasons I can’t understand my fellow Orthodox Jews who love Trump. Among others are his abhorrent immigration policies and constant dividing people.” — Howard (Hillel) Wallick, 62, New York

“I was born in 1983 and I was raised in a New York Orthodox community where most people voted Republican in national elections (local elections were a different story). I internalized most of these messages, though I thought of myself as an ‘independent’ with more liberal tendencies, and was registered as such for years. Yet in 2007, when I was 24 years old, George Bush vetoed the expansion of CHIP, a health insurance program for poor children. That was it for me. I realized that compassionate conservative is basically an oxymoron and supporting Israel is not as important as being a humane citizen. While it took me a few more years to formally switch my registration, I only have voted Democrat since.” — Matty Lichtenstein, 36, Florida

Non-Orthodox Jews mostly vote Democratic. But their stories are complicated, too.

“I am 75 years old and a lifelong Democrat. My first political memory is supporting Kennedy over Nixon even though I was too young to vote then. I feel my politics haven’t changed but rather that today’s Democratic Party has no place for me. Finally, when the Democratic Party found itself unable to censure Ilhan Omar’s repeated anti-Semitic outbursts, among other examples, I re-registered as an independent. I didn’t vote for Trump last time but I might now, depending on the Democratic nominee.” — Stephen Schwarz, 75, New York City (Reform)

“I was a Democrat until 2012, when I became an Independent, partly in response to noticing a growing acceptance of anti-Semitism on the left and a lack of will to confront the problem among Democratic political types. I wanted to signal that I would not accept Corbynization or be taken for granted.” — Ilana Hollenberg, 55-64, Massachusetts (Reform)

“The safety and well-being of Israel Inspires my political outlook. In the past I was more concerned with liberal Democrats and our policies. I am still a liberal, progressive Democrat. But I really do not like being vilified myself and seeing Israel vilified by people who also call themselves progressive Democrats. There are two candidates in the Democratic primaries that I like. But if they don’t win, I will vote for Trump, who has a very good record on Israel.” — Shira Hopkins, 65+, North Carolina (Reform)

“I had grown up in a rather right-wing, Orthodox Jewish environment, with a mix of Ashkenazim, Sephardim and Mizrachim. Naturally my ideas reflected the waters in which I swam. There had always been cognitive dissonance between the liberal impulses I had and the illiberal political stances I regurgitated, but it wasn’t brought to a head until 2014. In early 2014, I made Aliyah, and was drafted into the IDF later that summer. From the get-go I was confronted with the fallaciousness of the right-wing views I had about Israel and Arabs, and that confrontation with the self only continued to other areas, as though setting off a series of falling dominoes. I had abandoned nationalism and socially conservative thought, though I still considered myself a Republican and a right-winger simply because of my prior conditioning.

That all changed in 2016 during the GOP primary and eventual election of Trump. I was horrified, and I was pushed much further leftwards, largely by default. I would not stand with Nazis, white supremacists, or bigots of any kind. Not only was this the case for myself, but for my formerly arch-conservative family. Now we will only vote Democratic and our views on so many issues have changed after having seen their real-life effect both here in America and over in Israel, where we witnessed and experienced violence from Israeli nationalists.”  — Michael, 25-34, Florida (Secular)