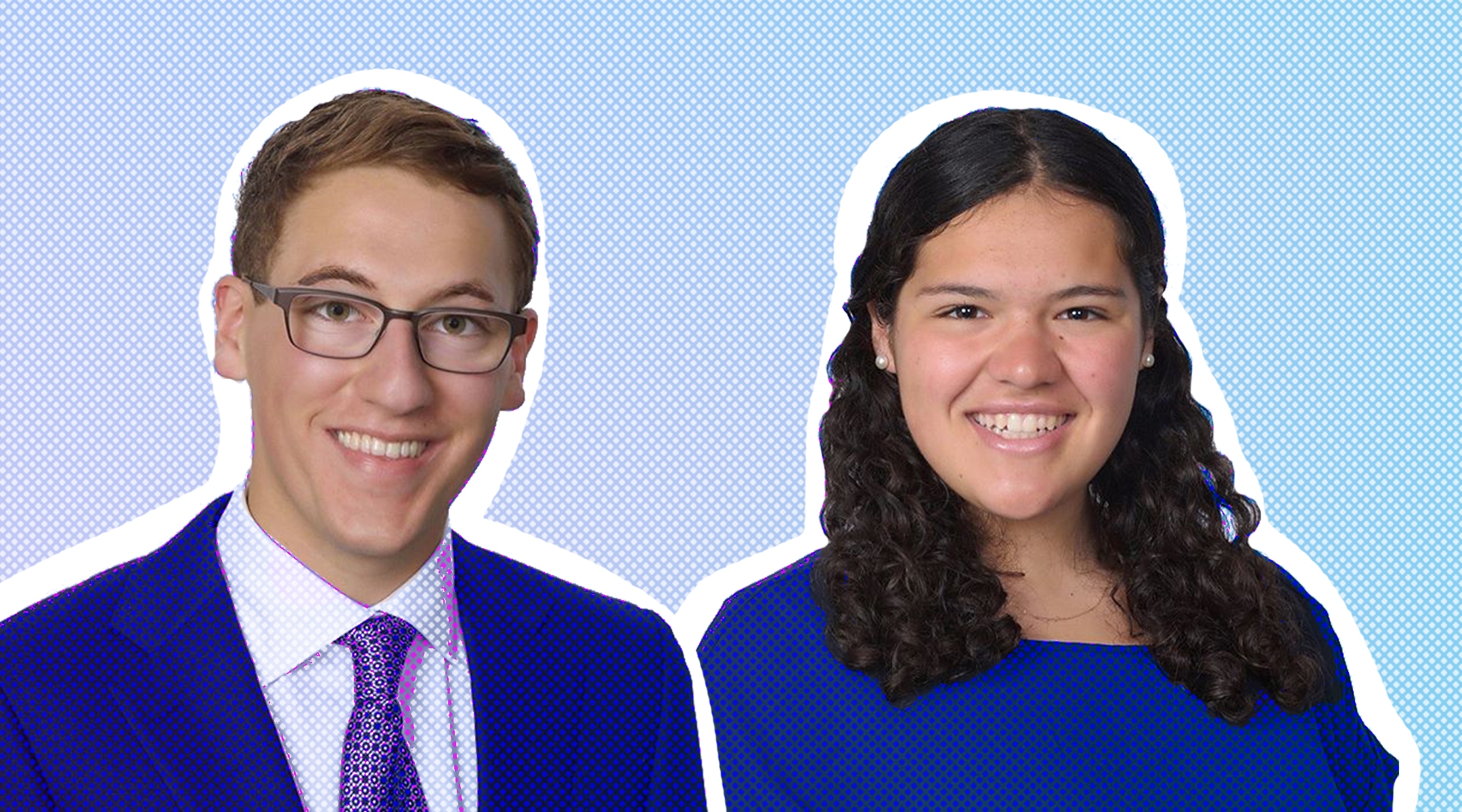 Los Angeles native Elyse Forman is helping mentor girls in science, while Solomon Olshin of Oregon is spearheading a project to help people transitioning out of homelessness. (Diller Foundation/JTA)
Advertisement

Growing up in Los Angeles, Elyse Forman always tried to take the highest-level science courses she could, like A.P. physics and chemistry.

Forman often found she was the only female in those classes.

“You can’t help but feel that you don’t belong when you’re not like everyone else in the class, when people don’t think that you have the right answers to questions, when they look at you weirdly if you participate,” the 18-year-old said.

What Forman didn’t realize is that the issue is also a national concern.

While women comprise nearly 60 percent of U.S. college graduates, according to the National Center for Education Statistics, they earn only about 35 percent of the undergraduate degrees in the STEM subjects: science, technology, engineering and mathematics.

The reason for the gap?

“Stereotype threat,” according to one prominent researcher.

“A female student taking a math test experiences an extra cognitive and emotional burden of worry related to the stereotype that women are not good at math,” Catherine Hill, a former vice president for research at the American Association of University Women, wrote in a recent report for the association.

Once Forman became aware of the larger problem, she decided she wanted to do something to about it. The summer before 11th grade, she launched Girls in STEM, a weekly afterschool program in which students from her high school visited third- through fifth-grade girls at low-income schools in an effort to spur their interest in science and technology. Forman said her goal was to build a “kehillah” — a supportive community — for these girls and the mentors.

“Luckily I had amazing female mentors who helped me out with this and encouraged me,” Forman said. “But so many girls don’t have that, and so I created this program in order to bridge the gender gap.”

Forman began with an eight-week program at two predominantly African-American and Hispanic elementary schools. Eight mentors worked with 20-30 students at each school.

“When you see a girl who will not talk at all on the first day of class and by the end is raising her hand and is so excited,” Forman said, “that gives me goosebumps.”

Forman is now a freshman at Brown University, and she is working on developing a similar program with local elementary schools in Providence, Rhode Island. Meanwhile, other students at her high school have kept Forman’s initiative running there.

In 2019, Forman was awarded a Diller Teen Tikkun Olam Award for her efforts. The prize is given annually to a select group of Jewish teenagers who demonstrate outstanding leadership in the Jewish value of tikkun olam, repairing the world, and comes with $36,000 to help further their initiative or pay for their education.

Diller also organizes a Shabbat retreat for all the winners.

“The Diller experience was transformative for me because it allowed me to connect with so many other teens who wanted to make a deep impact in the world the same way that I do,” Forman said. “The award’s emphasis on tikkun olam helped me better understand that it is our job to repair the world before we move on to anything else.”

Another Diller award winner was Solomon Olshin of Portland, Oregon, who spearheaded a project to help people transitioning out of homelessness.

“I had the opportunity to develop some really close friendships with people from all different backgrounds — socioeconomically, ethnically — all related to the Jewish community,” Olshin said of his experience at the Shabbat retreat. “Before Diller, I hadn’t really realized why I was doing these projects, and that really codified and solidified in my mind that a big part of my drive was coming from my experience as an American Jew.”

Olshin, whose bar mitzvah project consisted of organizing people to prepare soups and deliver them regularly to those living in homeless shelters or on the streets, has been interested in homelessness for some time.

As a high school sophomore, Olshin accompanied his father to a community of tiny houses aimed at helping recently homeless people. Part of a larger movement of micro-houses, the tiny homes — typically about 8 by 12 feet and with a price tag of about $2,000 — have been adopted by some municipalities as a low-cost alternative to the traditional homeless shelter system and a way to help people avoid the stress that comes with the uncertainty of sleeping on the streets.

The tiny houses were “a way to bring back a sense of dignity and basic level of human amenities to people who were really struggling,” Olshin said.

Part of a program at his high school focused on using technology to address social and environmental needs. Olshin and some friends spent months devising a solar-powered electrical system to provide a basic level of power, light and heat to residents of the houses. Calling it a JuiceBox, they reached out to local companies to obtain discounted parts and raised about $75,000 from contests like the Lexus Eco Challenge and companies like eBay.

In the three years since the teens manufactured 100 JuiceBox systems, as well as an off-grid solar-powered shower (a ShowerPod) and laundry facilities (a WashPod), the nonprofit organization Olshin launched to support the work, Shine, has helped five communities in Portland containing 20-50 houses.

“I have been working for a long time on this project,” Olshin said. “It’s been an amazing journey.”

Now a freshman at Pomona College in Claremont, California, Olshin is working on a new iteration of the JuiceBox with about 10 times more power but only twice the cost, for about $1,000 each.

He also created a club at his school to work on the project and recently won a $50,000 grant from the U.S. Department of Energy. The club plans to broaden the mission to create “environmentally sustainable, cost-effective” products that won’t just help people transition out of homelessness but also could be used in disaster recovery.

One of the most important consequences of the projects, Olshin said, is that people learn about homeless Americans.

“It helps them understand what these communities are and what they need to be successful,” Olshin said.