To stop the coronavirus, New Jersey rabbis decide to shut down their Jewish community 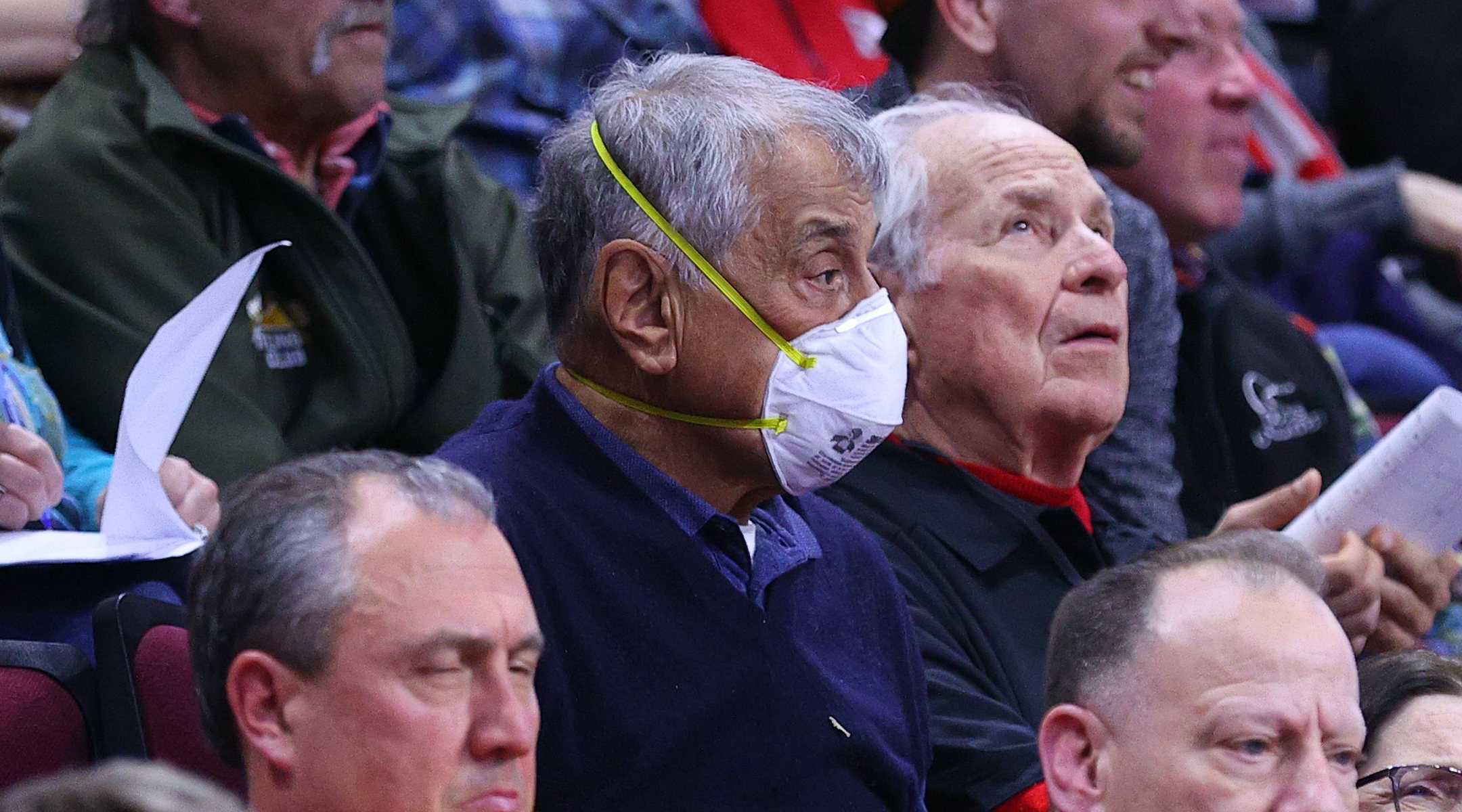 A fan wears a mask to protect against the coronavirus during the Big 10 wrestling championships at the Rutgers Athletic Center in Piscataway, N.J., March 7, 2020. (Rich Graessle/Icon Sportswire via Getty Images)
Advertisement

(JTA) — Larry Rothwachs, a rabbi in Teaneck, New Jersey, walked into the meeting Wednesday night between local Jewish leaders and health officials with one set of ideas about how his community should respond to the coronavirus.

He walked out later that evening certain of another one: that drastically curtailing Jewish traditions and rules is essential to stem the spread of the deadly disease.

“I don’t think everybody was on the same page coming in. I was not on the page I am at right now,” Rothwachs, the spiritual leader of Beth Aaron Synagogue, told the Jewish Telegraphic Agency. “By the time that we left, I do think there was an overwhelming consensus.”

The Rabbinical Council of Bergen County — which consists of rabbis representing 28 local Orthodox synagogues and one Jewish nursing home across the heavily Jewish suburban area — spelled out that consensus in a letter early Thursday to local Jews that issued one stunning decree after another.

All synagogues would shut down. No prayer gatherings would take place, even in people’s homes. No Shabbat meals should be shared. Burials would be kept to small groups of family members, and no one should gather to comfort mourners.

“I do not recall anything of this nature taking place,” said Jonathan Sarna, a professor of American Jewish history at Brandeis University. “This kind of organized statement by a central body, telling every Orthodox synagogue to shut down, that I do not recall seeing.”

The rabbinical council’s decision reflects the growing urgency to contain the spread of the virus, which so far has killed thousands of people around the world and on Thursday claimed its first victim in New Jersey.

Earlier this week, many congregations scaled down or canceled Purim celebrations, but synagogues were still discussing making relatively small-scale changes such as switching from buffets to served food. Now, with policy changes aimed at curbing the epidemic growing more sweeping by the minute, the conversation has turned to whether to close entirely, and when.

In Bergen County, one of several nodes of a cluster of documented coronavirus cases among Jews in the New York City area, the rabbis at Wednesday’s meeting were convinced by what they learned from local government representatives, the Teaneck Department of Health and physicians from three local hospitals.

The council’s letter made clear that the decision had not come easily for the Orthodox Jewish leaders, whose communities are structured in some ways around Jewish laws that require, for example, at least 10 people to say certain prayers, such as the one for mourners. Curtailing those practices means that local Jews will not be able to fulfill some religious requirements.

“It is with a very heavy heart that we are suspending so many of the most crucial routines of our daily lives and lifecycle moments,” the council wrote in its Thursday letter. “We do this only because of the compelling nature of our circumstance and the decisive medical testimonies that are consistent with CDC recommendations.”

In a statement released Thursday afternoon, the council’s president, Rabbi Kenneth Schiowitz, said the decision to bring local communal Jewish activity to a halt “was not taken lightly.”

“We have one goal, to slow the spread of the virus and to save lives,” he said. “Preserving life is a paramount value in Judaism and that value is our guide at this point.”

The decision is drawing praise from near and far. Tablet Magazine, an online journal about the Jewish world, said in an editorial that the rabbis’ decision illustrated “what communal responsibility looks like.”

And Teaneck Mayor Mohammed Hameeduddin said he hoped to see more actions such as the one taken by the rabbinical group.

“More and more data is coming out — they call it flattening the curve — the more that we can quarantine and keep people from spreading the virus is our best chance right now of containing it,” Hameeduddin told JTA. “And I think that as every day goes on where we are going on more and more presumptive positives, it’s time to take measures to close as many gatherings as possible.”

But for some in the community, the closure is coming too late to bring much comfort. Bryce Gruber lives in Manhattan but four of her five children were until recently students at Yeshivat He’Atid, an Orthodox day school in Teaneck.

Gruber, who recently decamped with her family to their house in the Catskills in an effort to avoid the coronavirus, said she had been contacting school administrators daily for a month to encourage them to close down. The school announced its closure Wednesday.

“I am grateful that it’s happening and I just wish it happened when there was still time to save lives,” Gruber said. “There’s already a dead guy in [Bergen County] and I keep wondering, did that guy really have to die?”

Meanwhile, Rothwachs said that he and other rabbis were trying their best to urge necessary precautions without adding to communal panic.

“We are trying our best to be reassuring and to remind everybody that the sun will shine again, and this too shall pass,” he said. “But right now the clear message that we are getting from the local medical community is that they cannot do this without us and that we must help them slow things down.”

Ben Sales contributed to this report.