As the coronavirus epidemic looms, American Jews brace for a Shabbat like no other 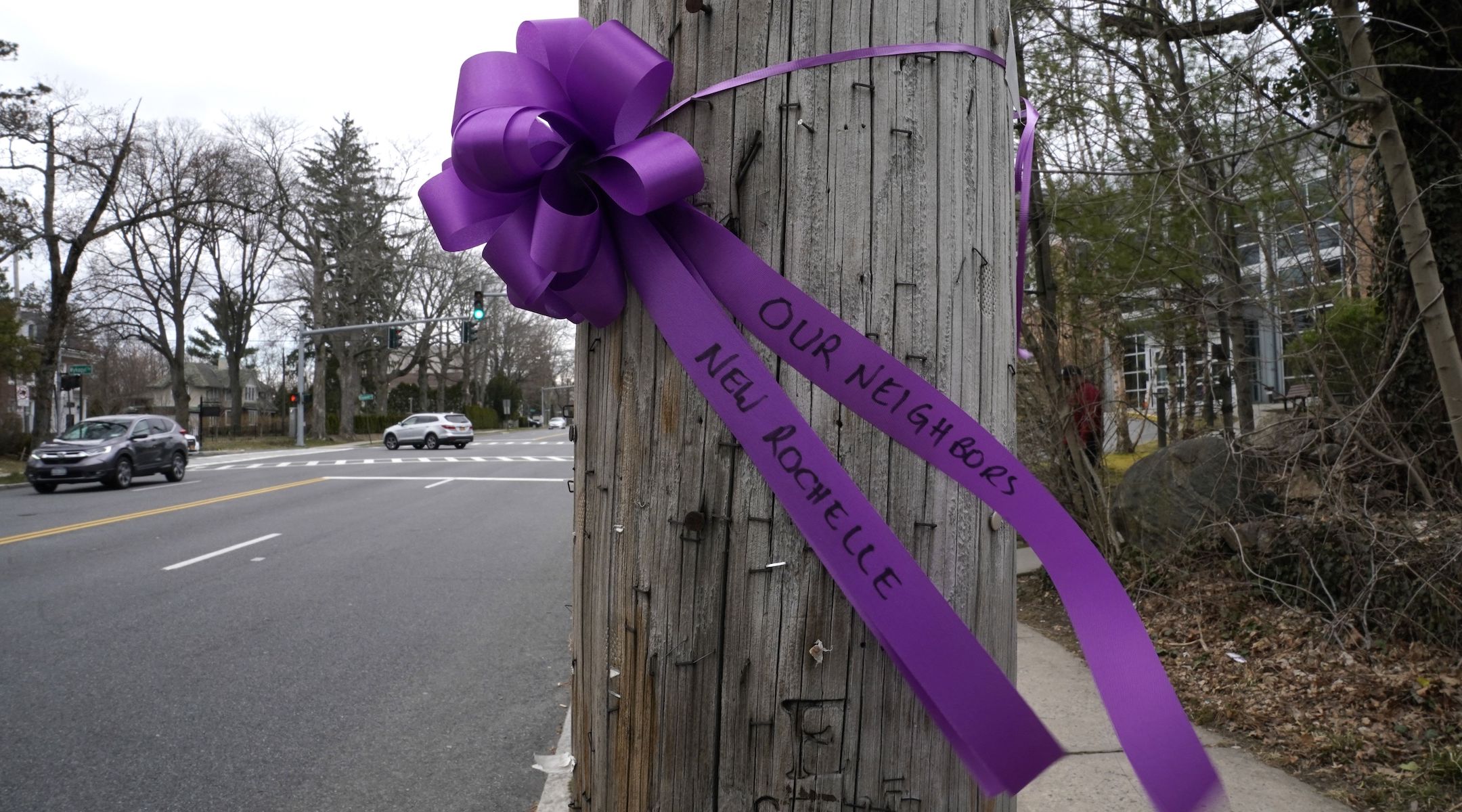 A ribbon expressing support is tied to a pole outside the Young Israel of New Rochelle synagogue in New York's Westchester County. The synagogue was quarantined after a member tested positive for the coronavirus, March 10, 2020. (Timothy A. Clary/AFP via Getty Images)
Advertisement

NEW YORK (JTA) — As of Thursday, Alex Matthews felt confident that the synagogue he leads in Newburyport, Massachusetts, would be able to hold services as scheduled this Shabbat.

Even as growing numbers of Jewish communities began shutting down schools and synagogues and, when possible, moving operations online, Congregation Ahavas Achim sent an email to its membership announcing its intention to hold prayers as planned on Saturday morning.

But as the day unfolded Thursday, cancellation emails came flooding in from his colleagues elsewhere. By late Friday morning, the synagogue had reversed course, joining a growing consensus that the most religiously appropriate way to respond to the coronavirus epidemic is to cancel all public synagogue activities.

“If we would have had Shabbat services tomorrow morning, we would have gotten 10 to 15 people and I would likely be the only one in the room not in an elevated risk group,” Matthews told the Jewish Telegraphic Agency on Friday afternoon. “As much as I want to continue with life as normal and provide a spiritual outlet for people, I think the reality on the ground needs to be one of utmost caution.”

That approach has taken root in an an ever-widening circle of Jewish communities as the Jewish world braces for a Shabbat unlike any other. From New York to Chicago to Dallas and beyond, a cascade of communities began cancelling synagogue services and other public gatherings as the Jewish Sabbath drew near.

Like many synagogues, Ohev Shalom was hopeful as recently as Thursday that it could still hold services as planned this Shabbat, even as it canceled other events deemed less central to religious life. Their one concession to the virus was moving Saturday morning services an hour earlier to communicate that this was not a time for socialization. The community would gather to perform an essential ritual of religious life and then disperse.

But as the weekend drew near, and after consulting with local officials, the synagogue decided even that was not a risk they could take.

“We take very seriously both prayer from a religious perspective but also really ensuring that there’s community available, especially for folks who live alone or really rely on the shul not just for the religious space but for the social communal space as well,” Friedman said. “So to make the decision that we’re shutting doors when we never make that decision, it’s very difficult. It’s not something we take lightly.” 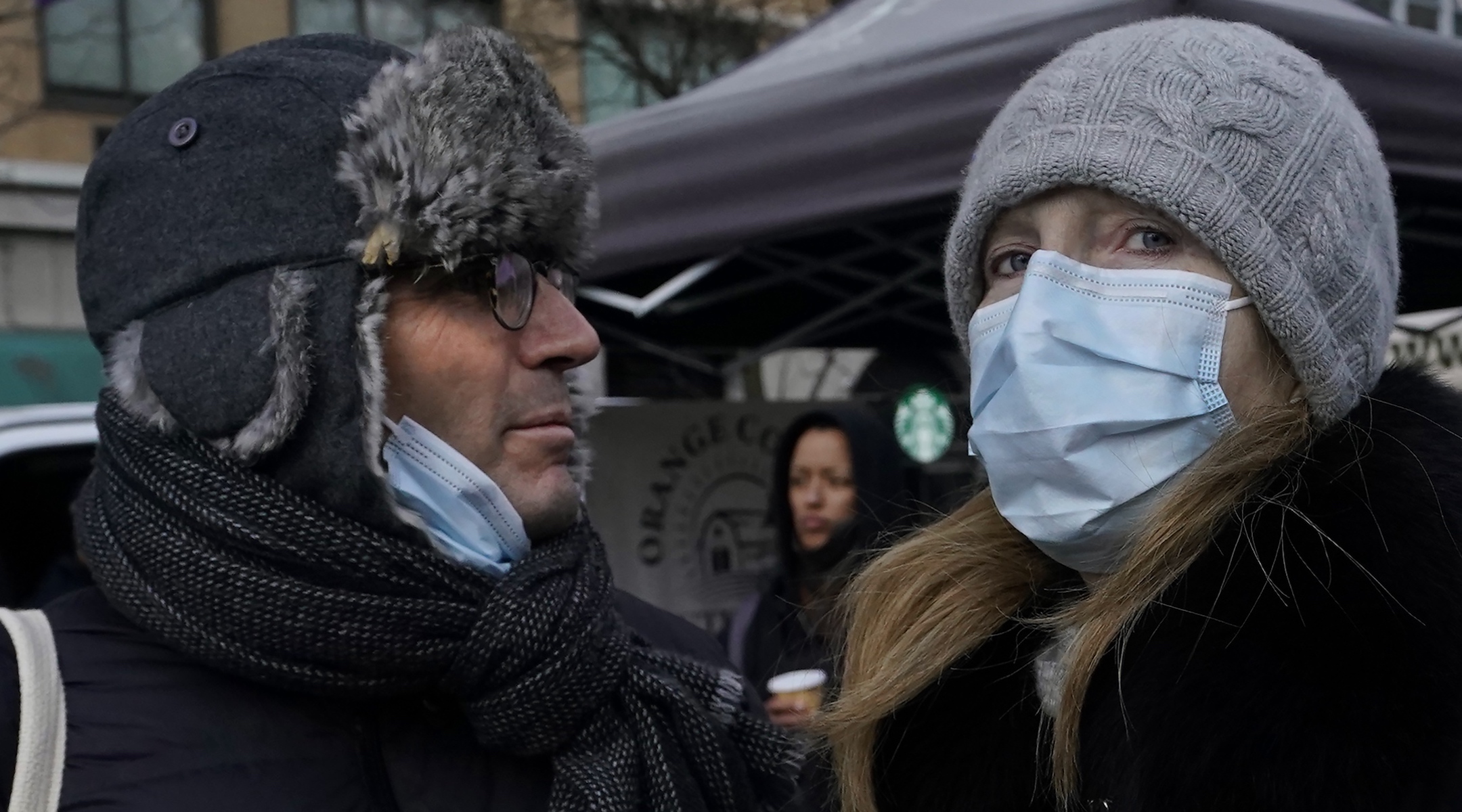 People wearing masks to protect from the coronavirus in New York’s Union Square, Feb. 28, 2020. (Timothy A. Clary/AFP via Getty Images)

Concerned that synagogues were letting that reticence impede efforts to protect communal health, Rabbi Robert Harris, a professor at the Jewish Theological Seminary, posted an urgent appeal on Facebook Thursday. Invoking the Jewish principle of pikuach nefesh, the idea that the imperative of protecting human life overrides all other religious considerations, Harris urged rabbis of all denominations to issue a temporary decree permitting the streaming of religious services.

“I was concerned the day before yesterday,” Harris told JTA. ”My understanding was that certain rabbis and synagogues were considering keeping their congregations open and I was alarmed at that because I thought that the reasons that they were hesitating were not in keeping with the primacy of pikuach nefesh, of preserving human life over other considerations which are ritual, meaning the observance of Shabbat.”

Some of the American Jewish communities most deeply affected by the virus remain in the greater New York City area, where Jewish individuals were among the first confirmed cases of the disease and some schools and synagogues have already been shuttered for a week.

In northern New Jersey, the Rabbinical Council of Bergen County adopted some of the most sweeping measures to contain the spread of the disease on Thursday when it ordered all synagogues to be shut down and forbade Shabbat gatherings in people’s homes — a mainstay of religious life for countless Jews in the area.

But communities across the country are taking similar steps. At the Young Israel of West Hartford, in central Connecticut, all synagogue classes were moved online and the daily prayer service was moved from the basement to the larger sanctuary upstairs to allow for more distance between worshippers. In Skokie, Illinois, coronavirus cases confirmed Friday morning caused synagogue activities that remained on the schedule to be called off. A statewide closure of houses of worship in Kentucky meant no Jewish communities would convene there.

“I think it’s on everyone’s mind,” said Tuvia Brander, the rabbi of Young Israel. “I think we’re all trying to take this very seriously and do that in a way that’s responsible and driven by knowledge and information from medical professionals, local health and government leaders.”

At the Skylake Synagogue in North Miami Beach, services are going ahead as scheduled this Shabbat, but nothing else — no post-service kiddush, no meals, no social events. Congregants are being urged to bring their own prayer books, to keep ample distance from one another, and to avoid kissing the Torah, as is traditional. Three weddings in the community have been canceled.

“We’re reassessing the situation all the time,” said Rabbi Ariel Yeshurun. “Right now we are not in the same reality that the folks up there in New York, up north, are experiencing, but if it does develop and if it does get to it, and the situation is very fluid right now, we are constantly holding meetings and conference calls and we will reassess.”

One synagogue that held a particularly fraught meeting this week was Congregation Beit Simchat Torah in Manhattan, which faced an acute dilemma — Naomi Springer-Galst was due to celebrate her bat-mitzvah at the synagogue on Saturday morning.

On Thursday, the LGBTQ-friendly synagogue announced that it would still hold services, but asked only close family and friends to attend in person. Everyone else was invited to follow along on a Facebook livestream.

“Our synagogue has been through a plague before — 40% of our congregation in the AIDS crisis,” Kleinbaum said. “I know what it takes to survive as a community through terrible loss, and resiliency and joy and spirituality is center to it. I know what my job is and I feel a deep sense of faith — not that everything is going to be OK, because I know how horrific the world could be, but a deep sense of faith that people can find great wisdom and learn deep things and reveal God’s presence even in these terrible times.”