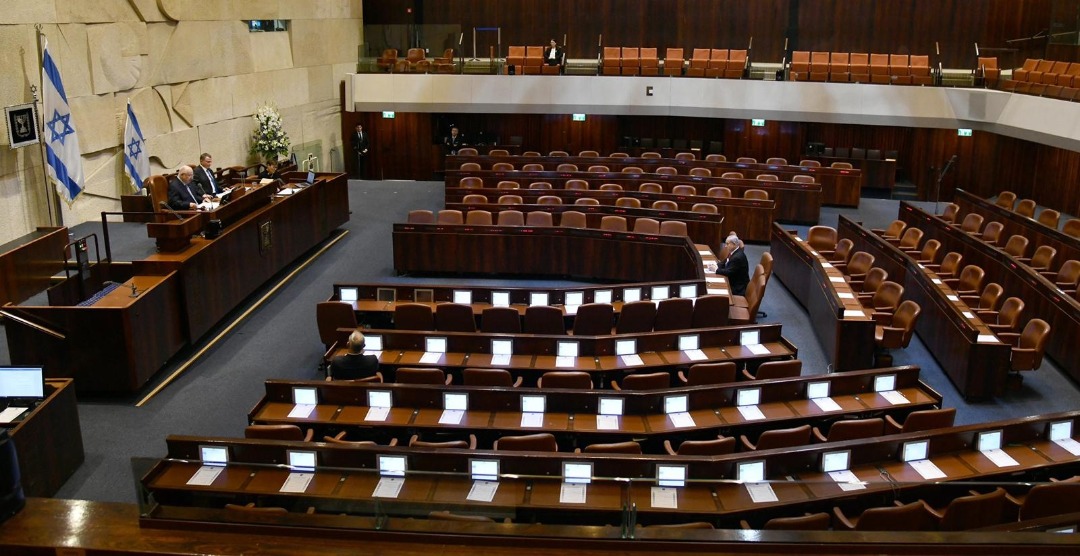 Israeli President Reuven Rivlin, flanked by then-Speaker Yuli Edelstein, speaks to a nearly empty Knesset chamber, where only Prime Minister Benjamin Netanyahu and Blue and White head Benny Gantz are seated due to limits to protect against the coronavirus during the swearing-in ceremony, March 16, 2020. (Haim Zach/GPO)
Advertisement

JERUSALEM (JTA) — Knesset Speaker Yuli Edelstein has adjourned the Israeli parliament until Monday, citing the need for talks on a unity government, in a move his critics are calling undemocratic.

Edelstein made the announcement on Wednesday after his Likud party and its chief rival, Blue and White, were unable to reach a compromise on the formation of Knesset committees. The committees are necessary to run Knesset activities.

Blue and White, whose head, Benny Gantz, has been tasked with forming a new government following elections earlier this month, wants to use one of those committees to replace Edelstein as speaker. Edelstein, who has served in the post since 2013, refused to hold a vote on Monday that would have named his successor.

Gantz said in a statement that Blue and White plans to petition the Supreme Court to weigh in on the matter.

“No crisis, whatever its scope, may be exploited as a means to trample upon values of national decorum and responsibility and to undermine the will of the voting public,” Gantz said. “Likud lacks a majority in the Knesset — so it has gone ahead and closed it. We won’t allow that.”

At issue is the Arrangements Committee, which oversees the formation and operation of Knesset. The committee is usually formed through the agreement of the Knesset’s parties.

Likud has said that the Arrangements Committee and the committees that it forms cannot have more than 10 members due to Health Ministry coronavirus restrictions, and that neither the right nor left should have a majority.

President Reuven Rivlin called Edelstein and urged him to reopen the Knesset.

“A Knesset that is out of action harms the ability of the State of Israel to function well and responsibly in an emergency,” Rivlin told Edelstein, according to a statement from the President’s Office. “We must not let this crisis, as serious as it is, harm our democratic system.”

Edelstein told Rivlin that he was working to resolve the dispute and called on Likud and Blue and White to reach an immediate understanding about the establishment of Knesset committees.

“The gaps between the sides are not great,” Edelstein said, “and Israeli citizens deserve that their elected representatives work for them and oversee the work of the government. There is no reason to drag this out.”

Netanyahu told Channel 12 news on Wednesday night that he would safeguard democracy in Israel. The prime minister, who has led a caretaker government for about a year, said that while he is “managing the battle against the coronavirus, some only want to overthrow a prime minister who is on guard.”

“This is the time to demonstrate national responsibility,” Netanyahu said. “We can and must form a government.”