‘Painful and deep’: Jewish nonprofits face dire economic prospects during and after coronavirus 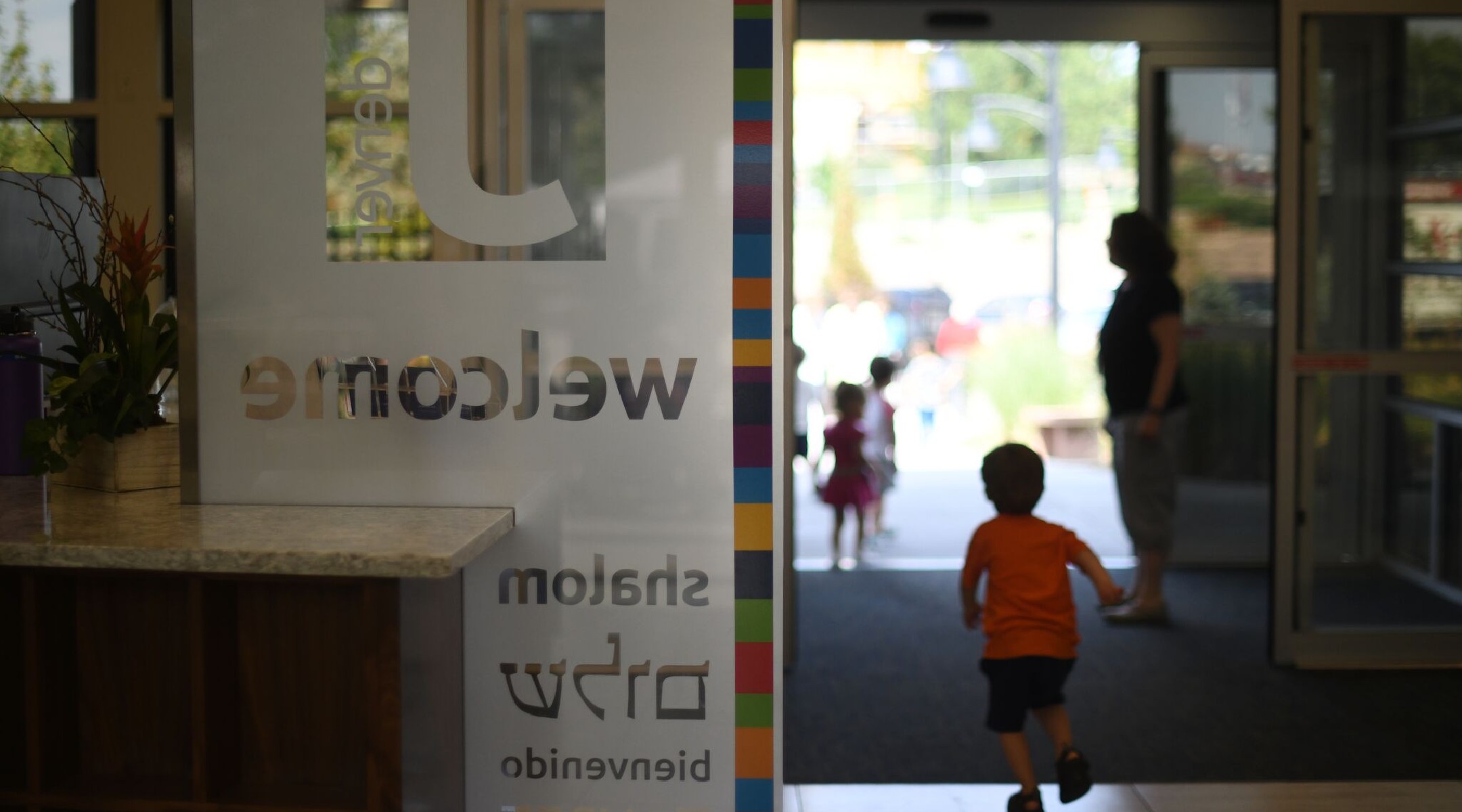 The main entrance of the Staenberg-Loup Jewish Community Center in Denver, July 27, 2018. At the time, the center had staved off financial worries thanks to a newly formed nonprofit that bought its property and infused it with cash to wipe out $14.3 million in debt. (Hyoung Chang/The Denver Post via Getty Images)
Advertisement

Because of the coronavirus crisis, a lot of them are going to lose their jobs.

“The cuts are going to be painful and deep,” said Doron Krakow, CEO of the JCC Association of North America.

“They are going to go into what I would call a hunker-down mode, which means that they’ll be subject to the kind of staff reductions that we are reading about affecting other industries.”

When the crisis ends, Krakow said, “The institutions themselves will be smaller, lesser versions of themselves operationally.”

In other words: It’s going to be bad.

That’s the message leaders across the Jewish organizational world are sending as the scope of the coronavirus-induced financial crisis becomes clearer. In addition to having health concerns surrounding COVID-19, Jewish nonprofits are anticipating layoffs, downsizing and closures during the economic downturn that will most likely deepen over the course of the virus scare.

And even as Jewish philanthropic leaders work to shore up short-term funding, the longer-term prospects for Jewish organizations, as for so many others, appear increasingly bleak.

“If you go to a zero-revenue model for an undetermined amount of months, even the strongest of institutions is going to be challenged,” said Eric Fingerhut, CEO of the Jewish Federations of North America, the umbrella organization for a $3 billion Jewish philanthropic network that employs some 10,000 people.

JCCs across the country are closed for social distancing. As 80% of their revenue comes from fees that clients pay for services, they are making almost no money. Thus, Krakow said, people like personal trainers, preschool teachers and — depending on the time frame — camp counselors are going to be laid off.

Krakow said the other 20% of JCC income comes largely from donors and foundations. As these funders see their stock portfolios dip and endowments shrink, they may donate less to institutions that need money now more than ever.

Jewish cultural institutions are hurting, too. The Tenement Museum, which tells the stories of Jewish and other immigrants on Manhattan’s Lower East Side, shrunk last week from a staff of 68 full-time and 70 part-time employees to a core group of just five that are still receiving full-time pay. Everyone else has either been laid off, had their hours cut or is not receiving salary.

The museum had 282,000 visitors in the last fiscal year. Now it’s closed until at least March 31 — and likely far longer. 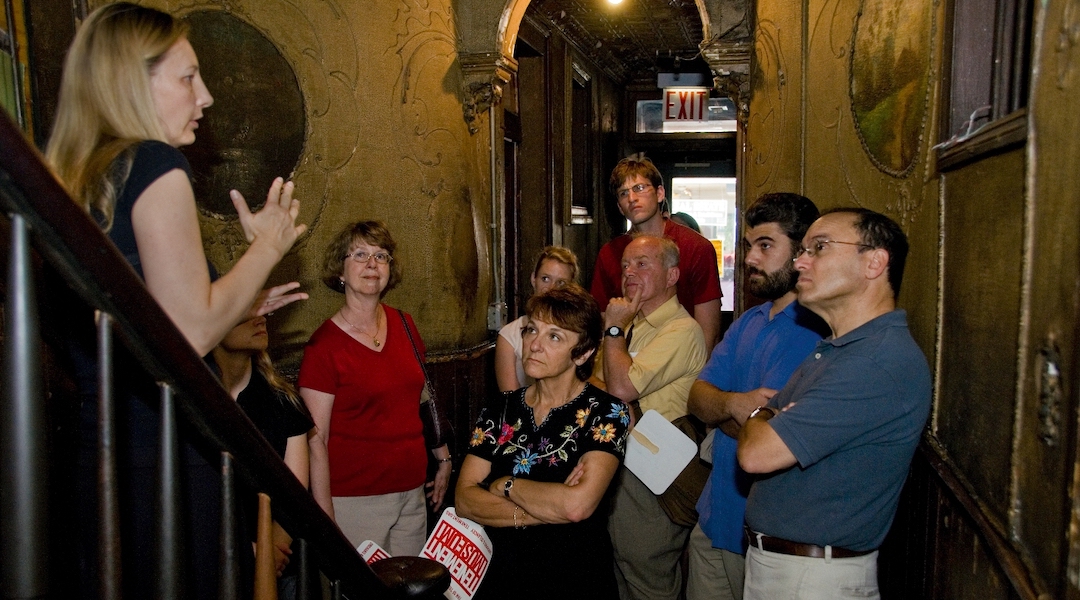 A group takes a tour of the Tenement Museum, which tells the stories of Jewish and other immigrants to New York, in 2008. The museum has closed temporarily and shedded most of its staff. (Kiko Niwa)

Its president, Morris Vogel, is working full-time with no pay. But he says he draws optimism from the stories of immigrants who survived the 1918 flu epidemic, as well as an 1892 quarantine of residents on the Lower East Side.

“They took enormous risks, they displayed extraordinary bravery,” he said. “We can’t fail in our obligation to keep their stories alive. In doing so we find hope to which we can lay claim in moments that are as unknowable to us as the Lower East Side was to folks who came from the Polish shtetl.”

The Jewish Funders Network, which convenes large donors and foundations, has called on funders to increase or maintain their giving — something that CEO Andres Spokoiny said did not always happen after the 2008 financial crisis. The network got 18 foundations to commit publicly to paying out grants for conferences or programs that have been canceled. But Spokoiny said uncertainty about what lies ahead makes long-term planning difficult.

Layoffs by JCCs and other Jewish organizations could spark a vicious cycle that deprives other Jewish groups of fees from those people, he said.

“When somebody has no money, they can’t pay for synagogue membership or JCC membership or day school tuition,” he said. “Crises have a domino effect.”

But philanthropies, particularly ones with large cash reserves, also have an obligation to use whatever money they have to help people impacted by the crisis, said Lila Corwin Berman, an expert in American Jewish philanthropy. During the Great Depression, she said, Jewish nonprofits pulled out all the stops — even at the risk of going broke — to help their constituents.

“I’m worried that this is going to make philanthropic organizations feel like they need to be really tight-fisted when I actually think it’s the opposite,” said Berman, an American Jewish history professor at Temple University. “It is for moments like this that that money must be directed toward the public quickly.”

In the face of lost service fees and a potential decline in donations, Jewish nonprofits are joining others in looking to the federal government for help. A letter signed by dozens of nonprofits across the country, including Jewish groups groups like the Jewish Federations of North America, JCC Association and Orthodox Union Advocacy Center, requests that $60 billion in government stimulus funds be set aside to shore up the country’s nonprofit sector. A bill that would provide some of that stimulus funding is now stalled in the Senate.

The nonprofits are asking as well for increased access to another set of emergency loans and requesting that taxpayers be allowed to deduct a larger share of their philanthropic donations from their taxable income.

“America’s charities are frontline responders providing food, shelter, medical services and other critical services to those in need in their communities,” the letter reads. “Without dramatic and immediate financial and programmatic backstop from government, America’s charitable nonprofits and the people we serve face a precipitous decline in mission services at a time when our efforts are needed like never before by the most vulnerable in our communities.”

Even as they face down an uncertain future themselves, many Jewish organizations are also trying to respond to the crisis in real time. The Tenement Museum is providing its curricula on immigrants free to the New York City Department of Education, which has switched to online learning. The Jewish Funders Network conference, which begins Monday, has been moved online, and most of its sessions deal in some way with the coronavirus crisis.

The Jewish Federations of North America is sending fundraising tips to local federations, as well as security guidelines for shuttered institutions. Local JCCs are providing online programming for kids, delivering meals to homebound seniors and providing child care for the kids of medical professionals.

“Once you close all these institutions and move everything online, people adapt to this new way of operating, we think there will be some fundamental changes … in how institutions deliver services,” Fingerhut said. “We hope and intend to help when the world reopens.”