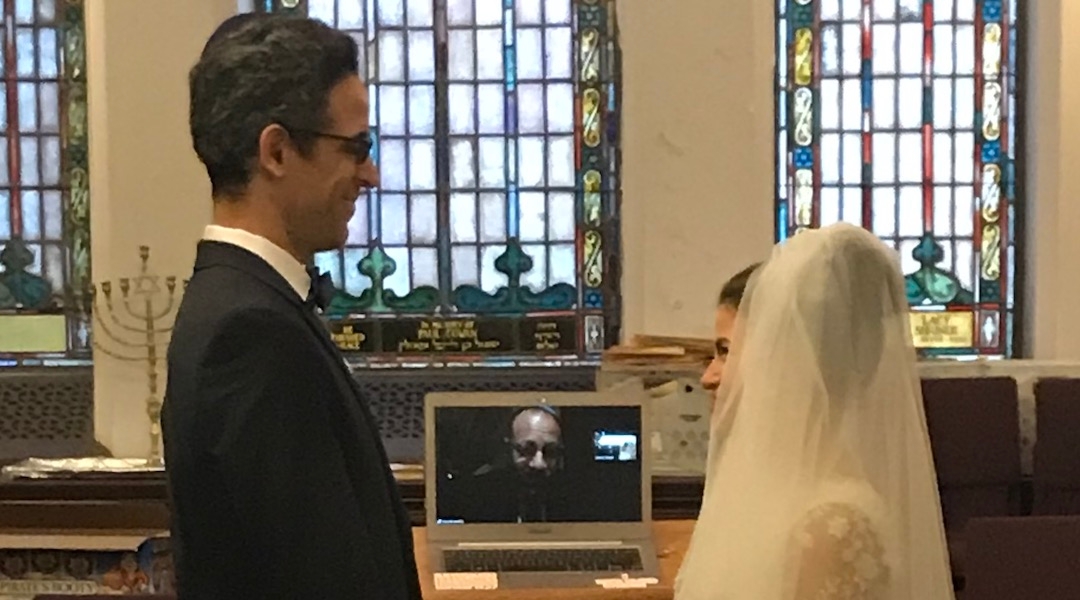 (JTA) — Before everything changed, Jalna Silverstein and Asael Papour were planning a wedding much like many other Jewish nuptials on the Upper West Side of Manhattan.

They had a band and caterer lined up, a ceremony planned for the synagogue where Silverstein grew up and all the little details mapped out, from the napkins to the chair coverings to the types of utensils.

In February, as the coronavirus pandemic became more urgent in news headlines, the couple felt the first faint stirrings of concern. An elderly friend of the groom’s family, citing his elevated risk for the disease, informed them he couldn’t make it.

Still, there were very few cases in New York, and the cancellation seemed more like a speed bump than a barrier.

As March arrived, however, things began to look much bleaker.

“People with families and high-risk people started to show concern and ask us, are we still on for the wedding? And what’s the plan”? Papour told the Jewish Telegraphic Agency.

So they put out some feelers to their guest list: Were people still planning to attend? Should they persevere or pull the plug?

“Nobody knew what to tell us,” Papour said.

As with so many things in the age of coronavirus, things moved slowly at first — and then very quickly. On March 11, the United States announced a 30-day ban on travel from Europe. Papour’s family in Israel and Germany would not be able to get there.

“At that point things had escalated here, too,” Silverstein said. “To my mother’s dismay, after hard planning and utter disappointment, I had to break it to my mom that I don’t think this is going to happen.”

At least not as originally planned. They canceled the band and the caterer and bumped up the date a week, hoping to stay ahead of an expected ban on public gatherings. But they were determined the wedding was going to happen in some form.

That form wound up being online. A small group would gather in Silverstein’s synagogue — immediate family, a handful of close friends and a rabbi — and everyone else could watch a livestream. It seemed, amid the swirling chaos all around them, the wedding would still happen.

Then on Friday afternoon, with two days to go to the now online-only ceremony, the rabbi called.

“He sounds awful,” Papour said. “It sounds like he can’t breathe.”

At a time when even a light cough can inspire mortal fear, the couple decided to wait and check in after Shabbat. But when the rabbi called on Saturday night, the news was bad: He felt worse.

He had an idea, though: If the guests could participate in the ceremony over videoconference, why couldn’t the officiant, too?

So, on Sunday afternoon, Silverstein and Papour — she in a white gown, he in a black suit — stood in front of a camera in the chapel at Ansche Chesed on West 100th Street, the disembodied head of Rabbi Jeremy Kalmanofsky staring back at them from a laptop screen perched on a rostrum.

Friends tuning in online got decked out in tuxedos and other wedding finery (“I’m going to do my hair for the first time in three weeks,” one told Silverstein). The handful of guests in the room with the newlyweds kept a respectful distance in keeping with social distancing regulations.

Hours later, the governor issued a statewide lockdown order that banned nonessential gatherings of any size. And Kalmanofsky’s coronavirus test came back negative.

“It’s been a fun turn of events,” Papour said. “Luckily we’re both mutable enough to go with the flow. We really didn’t have a choice.”