From prayers to puppets: A one-stop shop for Jewish livestreams aims to outlast the pandemic 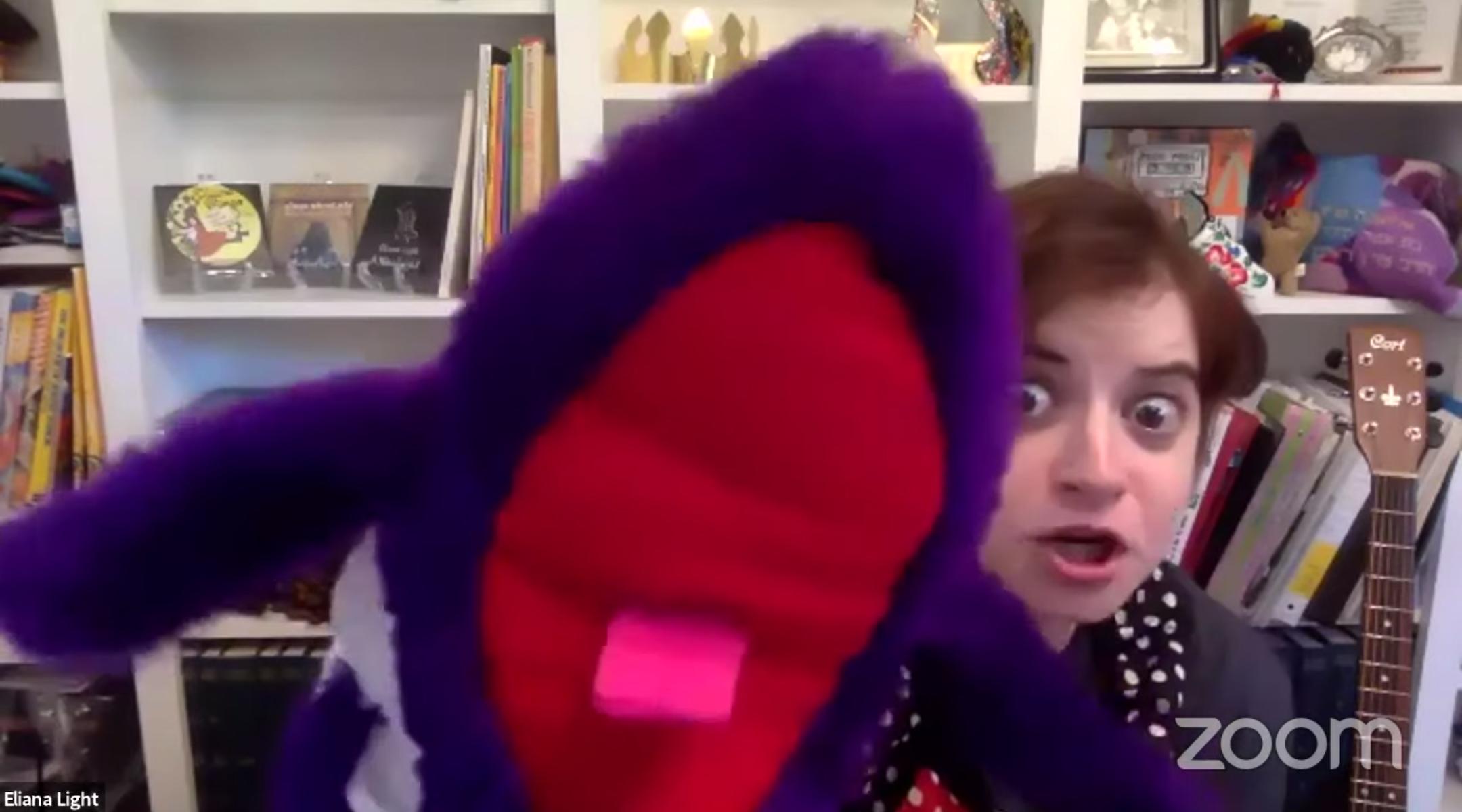 "Eliana Light... And Friends!" is a Jewish children's show that airs weekly on jewishLIVE. (Screenshot from YouTube)
Advertisement

(JTA) — On Monday, there’s a Jewish space that hosts two Torah classes and the taping of a podcast.

On Wednesday, the space offers a Jewish TV show for kids and a discussion of Jewish history.

On Friday night and again on Saturday morning, it hosts several prayer services simultaneously — some experimental, some more musical, some more standard Conservative or Reform.

Beyond hosting these events, the space also provides access to yoga, arts programs or classes like one titled “The Concubine in the Refrigerator: Objectifying Women in Comics and Scripture.”

It is, of course, not a physical space because no one is gathering in physical spaces now. It’s a website called jewishLIVE that has become a one-stop shop for Jewish livestreaming since its founding six weeks ago — right in time for the stay-at-home and social distancing orders that swept the country because of the coronavirus pandemic.

JewishLive is not the only platform to be taking Jewish spiritual and entertainment experiences online for the moment. But its founders hope the site will not only fill a need for Jewish community and content now — but also help create a new paradigm for Jewish involvement if and when things return to a semblance of normal.

“If we have Jewish life right now, it’s going to be digital,” co-founder Lex Rofeberg said. “This new moment unlocks or accelerates a lot of changes that were already underway and shines a light on a lot of things we need that are new.”

JewishLIVE streams its events concurrently on Zoom and Facebook. Since it launched in mid-March, the site has hosted 230 events — about five to seven a day — that have garnered more than 5,000 unique viewers. And it’s got a stable of 15 weekly events. One of the more popular, with a couple hundred viewers an episode, is the Jewish Women’s Archive Quarantine Book Club on Thursdays. Others get as few as a dozen.

The site was founded by the two hosts and an avid listener of the podcast Judaism Unbound, which conducts interviews with Jewish authors, artists, teachers and activists who are generally independent of mainstream Jewish institutions.

Rofeberg and Dan Libenson host the podcast, but the genesis of the livestreaming idea came from a listener, Apryl Stern, an active member of the Bay Area Jewish community. Stern compared her vision for jewishLIVE to the fitness company Peloton, which offers exercise equipment and personalized home workouts to clients via video.

“They curate experiences,” Stern said of Peloton. “They started with the cycle and branched out into all these different modes. That’s what I want for jewishLIVE. I want experiences that are high quality, curated, from people who are offering something of value.”

Stern came up with the idea two years ago but it sputtered until the pandemic, when, Libenson said, “in the span of two days, every live, in-person Jewish event of any size was going to be canceled for an extended period of time.” The site launched six weeks ago, on a Friday, and carried livestreams of independent Jewish congregations in San Francisco, Los Angeles and New York City. Stern watched all three.

“I’m sitting in my living room and I’m watching and I’m thinking, this is exactly what I wanted all along,” she said.

JewishLIVE events are hardly the only ones happening online right now. Nearly every synagogue in the country is offering versions of its services online, and Jewish nonprofits have been scheduling special events just as quickly as they can line up presenters. My Jewish Learning, like JTA published by 70 Faces Media, offers dozens of learning opportunities online each week, from group Torah study classes to a daily Kaddish minyan.

For now, Rofeberg hopes to cast a wide tent in what the site broadcasts, but wants it to provide a spotlight for the small organizations or independent thinkers he and Libenson host on their podcast. Many of the current jewishLIVE programs feature past guests. And the site divides programs into virtual “stages:” There’s a Kids’ Stage, a Music Stage, a Soul Stage and so on.

“If people are in a moment where they feel isolated, our vision is that we’ll have sections of our website that will feel relevant to them,” Rofeberg said. Livestreaming, he said, is “an equal playing field, and it’s a playing field where small organizations can on some level have an impact.”

Content on the site takes a range of forms. The Quarantine Book Club, which hosts authors, looks like a regular Zoom discussion. A class in psalms by Rabbi Shai Held spends a lot of time on a screenshare, with pivots to a gallery view of all participants.

“Eliana Light … and Friends!,” presented as a children’s TV show by the Jewish musician, is more physically active. Light, who began innovating online early in the coronavirus crisis, jumps up and down with her guitar, dances and does kid-friendly aerobics, all to song.

A recent episode, airing before the start of Passover, featured Light in an apron for baking matzah, pretending along with a hand puppet named Sheepie to be a slave to Pharaoh. A couple dozen viewers watch each weekly episode.

“Even if days are difficult, preparing for the show, smiling into the camera, it has really given me even moments of joy,” Light told the Jewish Telegraphic Agency, adding that performing without an audience is hard because “when you’re singing into the void, you’re creating all the energy yourself, which is exhausting.”

The founders say the livestreaming has generally gone smoothly, minus the occasional anti-Semitic Zoom bomb (one intruder changed his background to a picture of Hitler before he was kicked off). But it’s still a relatively barebones operation. jewishLIVE does not pay its content creators — Libenson hopes to change that — and runs on a budget of $2,000 to $3,000 per month.

And it still has a DIY feel. The start of Light’s pre-Passover episode was Rofeberg making her the host of the Zoom call before she took over and began strumming her theme song.

The founders hope to see the platform remain and grow after the pandemic passes. Rofeberg said it provides expanded access to Jewish content for people with disabilities, who may not be able to experience all in-person Jewish events. And Libenson values how jewishLIVE allows people outside of large cities to access innovative Jewish prayer services happening in places like New York City or Chicago, where he lives.

“After the virus is over, a lot of people will want to go back to the institutions and experiences they had before,” he said. “We believe that a lot of people are going to want to stay, so what jewishLIVE is going to become is the hub or the JCC for those people.”