How Berlin’s Jewish creative class is adapting to the pandemic 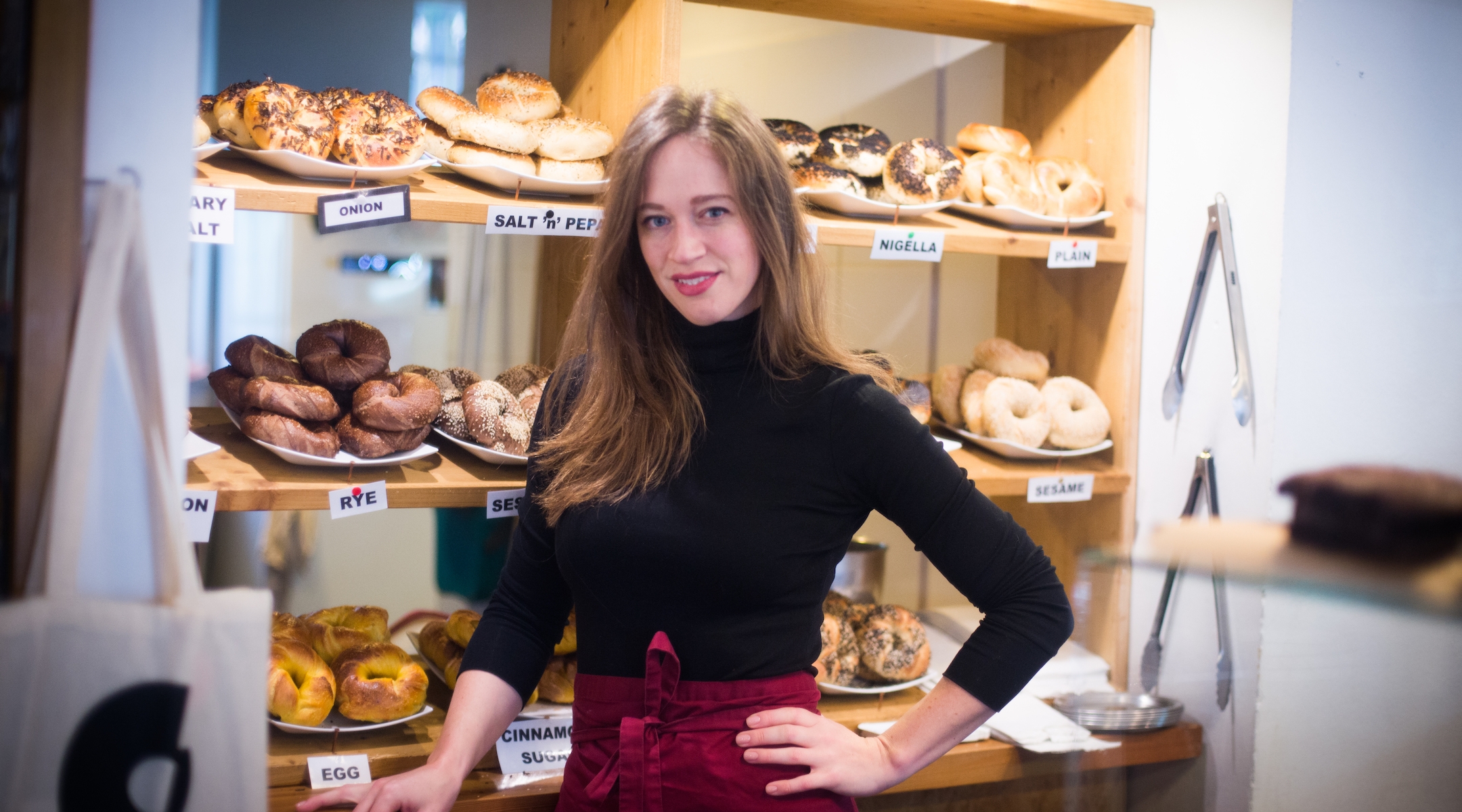 Laurel Kratochvila is a Boston native who launched Fine Bagels in 2013 to carry on Jewish culinary traditions in Berlin. (Shendl Copitman)
Advertisement

BERLIN (JTA) — This capital city hasn’t been locked down to the same extent as cities in France or Italy, or even different regions of Germany, like Bavaria. But the same harsh general restrictions on daily life apply.

Restaurants have been closed with exceptions made for takeout and delivery. Schools have been shut down, as have religious institutions to the public, and live performances are canceled.

Nevertheless, citizens of Berlin, known as of one of the world’s epicenters of creative life, have adapted in fittingly creative fashion. Jewish life — from the spiritual to the culinary — is changing rapidly, but also thriving in certain ways.

Laurel Kratochvila is a Boston native who launched Fine Bagels in 2013 to carry on Jewish culinary traditions here.

“I would call it a very modern Jewish bakery and cafe,” she said. “We definitely fly a little under the radar, but if you know what we’re doing, you understand bagels, rugelach, all of that.”

Fine Bagels sits in Berlin’s drabby yet chic Friedrichshain neighborhood right off of the M10 tram. Inside, visitors take their coffee and bagel surrounded by a small library’s worth of books, including a selection about the city and Jewish cookbooks.

When the pandemic struck and restrictions hit businesses hard, Kratochvila told her husband and business partner Roman that they had to find a way to do delivery.

They created a special Corona Deliveries! page with a selection of their usual bagels, books and pastries, and despite the yeast shortage, planned to sell their Shabbat challah offered only on Thursdays and Fridays. The transition has been surprisingly smooth.

“It’s funny how quickly we’ve been able to settle into a routine,” she said. “It feels like we’ve been functioning this way forever.”

The response from customers?

Kratochvila calls it “unbelievable,” saying “we’re actually busier than we’ve ever been, just in terms of working 12-hour days every day.”

They deliver directly to customers’ doorsteps, and buyers can ask for a dropoff outside their home without human contact, as long as they’ve paid by PayPal beforehand.

“We’re making less money, obviously, but I’m totally happy because we still have work for our staff as a result and we’re going to survive this crisis,” Kratochvila said.

His Liberal synagogue — what would pass as Reform in the U.S. — was quick to react to the closure of religious institutions by moving services online with livestreaming on Facebook. 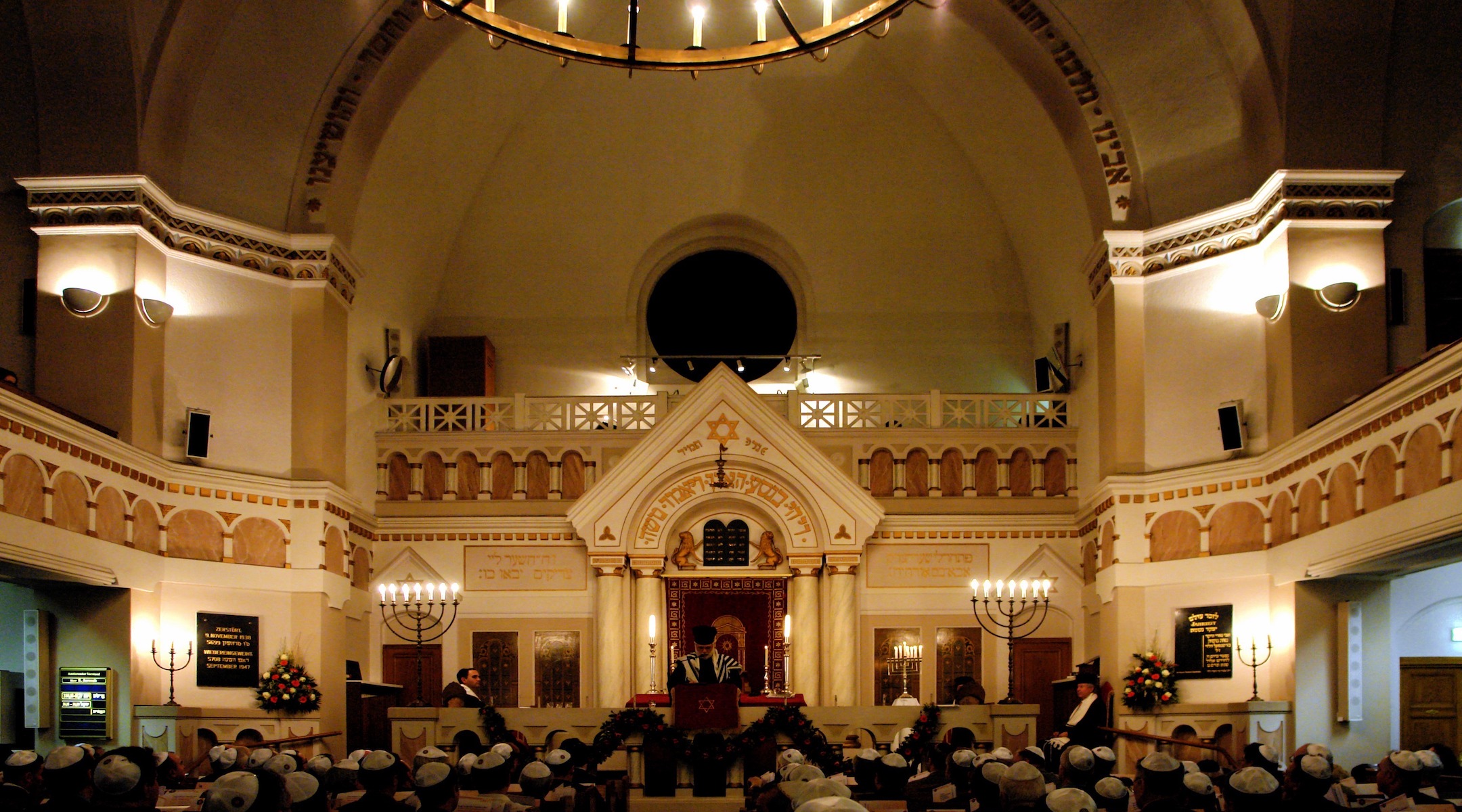 A view inside the Pestalozzistrasse Synagogue in 2007. The Liberal congregation early in the pandemic moved to livestreaming services. (Bladt/ullstein bild via Getty Images)

“Every response has been positive,” he said, adding that members have appreciated the opportunity to stay connected. “I must say there’s been a lot of creativity that wasn’t there before. … It’s nice to meet people, but we’ve seen that you can reach people and there’s a new level of accessibility.”

Rabbi Rebecca Blady came to Berlin with her husband, Rabbi Jeremy Borovitz, about four years ago to launch a popup project that would become Base Berlin — a pluralistic Jewish space for young adults to learn and connect with each other. They paused all events in their physical home on March 13.

“It was a very difficult decision because we’re an organization that places a lot of value on gathering and the tremendous human experience that is gathering,” she said. “And we’re not able to do that physically right now, so we are challenging ourselves to continue the work of building spiritual community without that aspect of gathering in person.”

Like Sievers, the couple have transitioned much of their work online, offering classes, meditation sessions and a virtual Havdalah prayer to close the Sabbath. A silver lining to the situation: Participation is up.

Blady thinks that the ability to join from home has made it easier for introverts to more confidently join in the activities. In addition, she believes people from outside of Berlin, who wouldn’t normally have a chance to attend a Base event, are tuning in.

“I would say, on average, the numbers are higher,” Blady said. “I think people are definitely looking for community. I think there’s a big sense of loneliness that already existed before the pandemic.”

A kosher supermarket takes a hit

“It’s been very difficult,” she said while resting at home.

Silber’s business, situated in an area with other Orthodox Jewish shops and synagogues, relies heavily on imports from Israel, which have been delayed. In normal times, Lampari distributes those imports to hotels, restaurants, communities and organizations throughout Germany.

Lampari has taken a definite financial hit during the crisis. But the new reality has allowed the store to better focus on the needs of individual customers and arrange deliveries.

“Our employees are really putting in a lot of effort,” Silber said. “Not many would do what my employees are doing. They risk their health to make sure people get their groceries. It’s not about the money now. It’s about human life.”

For a klezmer musician, an “endless Shabbos”

Daniel Kahn, a Yiddish-speaking klezmer musician and songwriter from Detroit, sees the potential for an even greater seismic shift in society.

“It’s like an endless Shabbos,” he quipped. “But with electricity.” 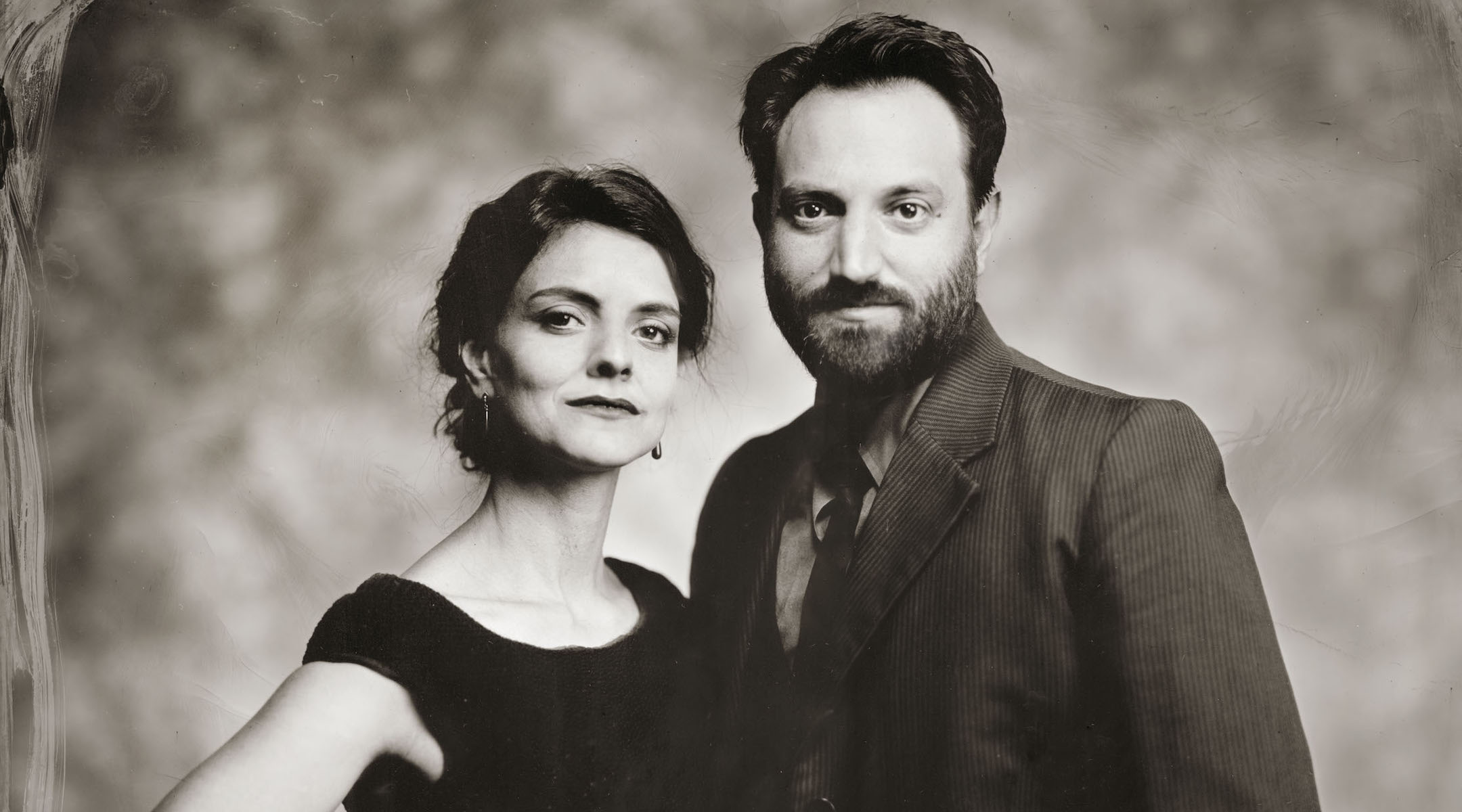 In sincerity Kahn, who plays accordion and guitar, suggested that the world needed this pause.

“This idea that commerce falls away, the market falls away and you’re left with yourself and hopefully your loved ones, your closest loved ones,” he said. “You’re left clinging dearly onto the basic connections that we can have with each other.”

Kahn came to Berlin in 2005, where he later met his wife, Yeva Lapsker, a dancer and translator.

“Berlin is sort of the center point between East and West,” he said, where artists from different backgrounds have the opportunity to collaborate. “It’s a transit point and it’s a collecting point and it’s a place of refuge.”

Kahn rattled off a list of canceled klezmer workshops, concerts and festivals that he and his wife would have attended.

“Normally we’re traveling all the time, you know, like on tour and going to festivals,” he said. “It’s just been a complete standstill and everything is now completely uncertain.”

That said, Kahn also has been able to move some of his work online. He was set to perform at an international, interfaith unity concert and had plans to participate in a Yiddish Passover Seder. Later in the month, he’ll headline a solo online performance for the Folksbiene Theater in New York and then do another at home here.

“I’m not at all focused on how to monetize that stuff,” he said. “I don’t see it as any kind of a functional replacement for physical performance.”

Lapsker thinks people will soon tire of all the online offering and Zoom conferences, if they haven’t already.

“I think it is a Band-Aid,” she said, “but it actually makes us just remember what we’re really missing.”

A queer cabaret tries to keep the momentum going

Nobody had plans to cancel their Passover Seders earlier this month, only to adjust them. Some even ended up participating in more than one.

But none were quite like the queer-themed Seder held by the collaborators behind the cabaret group Jews! Jews! Jews! — Lolita Va Voom, a burlesque dancer, and Nana Schewitz, a 96-year-old Jewish grandmother in drag played by a 25-year-old transplant from Florida.

Lolita is a tour guide by day and started Jews! Jews! Jews! after growing frustrated with her guests, who only seemed interested in seeing Jews as victims of the Holocaust. Nana echoed the sentiment. 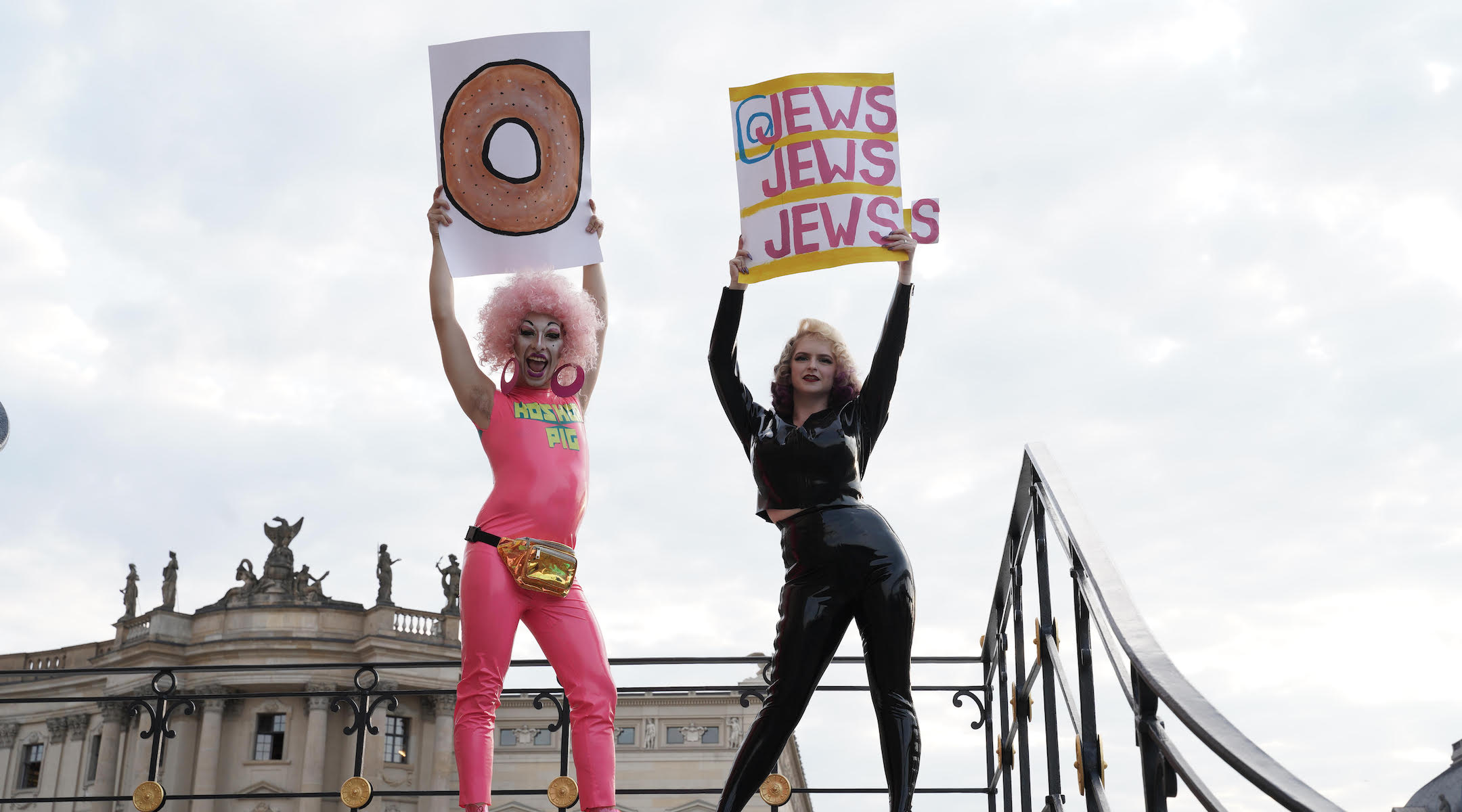 “People immediately want to apologize for their grandparents,” Nana said.

So Lolita strove to show off another side of Jewish life in Berlin.

“Berlin has such a rich and interesting Jewish history,” she said. “I wanted to do something to represent subversive Jewish art here in Berlin and show people that there are living, breathing, creating Jews here in Berlin and we’re not just some mythical fantasy or only Israeli or Orthodox.”

They planned a queer Seder for the stage, but it had to be moved online, too. Nana called the Seder — complete with a homemade Haggadah — a combination of traditional and “very silly, very queer” elements, with Nana in full drag as her character and Lolita performing burlesque.

They were encouraged that a few dozen participated in the Seder, and while they can’t perform their usual show in person these days, they have done so online a few times.

“That’s what excites me about Judaism,” Nana said. “It’s exactly what you make of it, and we were able to create and foster Judaism into what we want it to be and what we needed it to be.”