For Jewish teens struggling in the coronavirus era, Jewish groups extend a lifeline 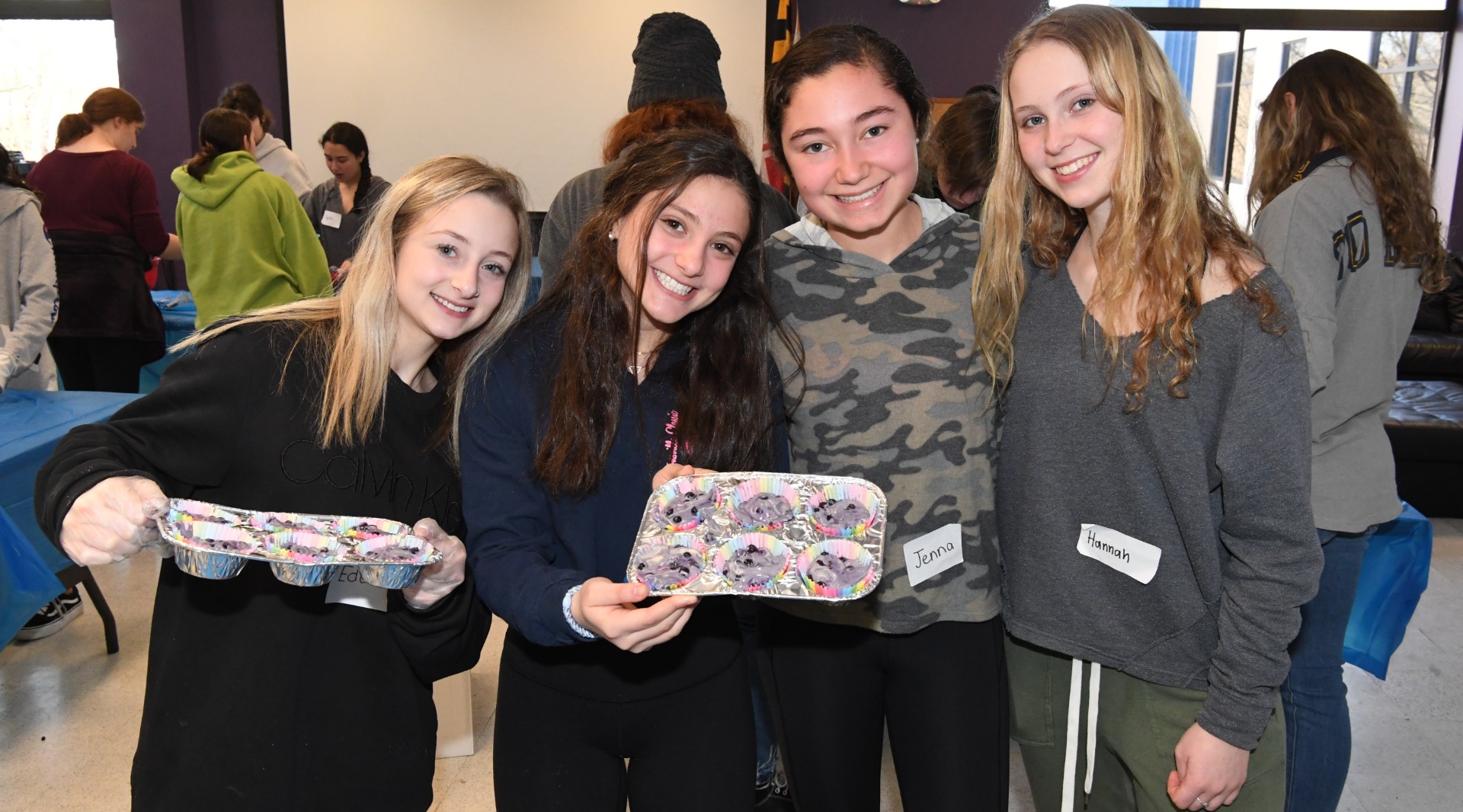 With teenagers unable to participate in in-person get-togethers, like this pre-pandemic event organized by 4Front Baltimore, a Jewish teen engagement initiative, Jewish groups are making extra efforts to reach out and engage with Jewish teens. (Courtesy of JCC Baltimore)
Advertisement

Makayla Wigder, a high school senior from Houston, had been looking forward to the prom, graduation and one last summer with her friends before leaving for college.

Then came the coronavirus pandemic. Now those plans appear highly unlikely to materialize.

“It’s just devastating,” Wigder lamented. “Graduation is something we’ve worked toward for the past 12 years. Finishing without a sense of closure is just really disappointing.”

With much of America under lockdown, the struggles of the sick, the elderly and those tasked with helping them are front and center. But even those with seemingly less urgent needs — such as teens, many of whom struggle with anxiety or depression in ordinary times — are also at greater risk of struggle during this epidemic, experts say.

“It was hard to be a teenager even before all of this, but COVID-19 is amplifying the most painful parts about adolescence,” said Sara Allen, executive director of Jewish Teen Education & Engagement Funder Collaborative, a partnership between local federations and the Jim Joseph Foundation.

Allen is planning a webinar in May to coincide with Mental Health Awareness Month for a network of 800 Jewish professionals who work with teens.

Many teens are feeling a real sense of grief at the loss of the traditional rituals that close out high school, Allen said, but they don’t necessarily recognize the emotion as such.

“They feel they were robbed. But it doesn’t trigger as grief, so that makes it harder for them to move through the stages,” she said. “We’re trying to help them with the language, and perhaps some kind of Jewish ritual over this loss, so they can feel a sense of agency over it.”

At Jewish federations across the country, adults who work on teen programs are recasting what they do to reach out to teens and make sure they’re OK, help them build resilience and cope with the coronavirus crisis, and even engage them in projects to help the wider community during these extraordinary times.

In Texas, Katelyn Bleiweiss, the mental health programs coordinator at Jewish Family Service of Greater Houston, a federation partner, recently led a Zoom workshop with some 40 teens to talk about resilience. It was adapted to the pandemic from a suicide prevention program, Sources of Strength, that Jewish Family Service brought to the Jewish community in Texas.

“We talked about the strengths that we had before COVID-19 — like cooking or playing with your dog or playing soccer, and how can we modify these things for the present reality?” Bleiweiss said.

For example, if a soccer player can’t play with her team, she can still practice her technique at home, Bleiwiss said, focusing on a skill or something they enjoyed before can help reduce anxiety now. 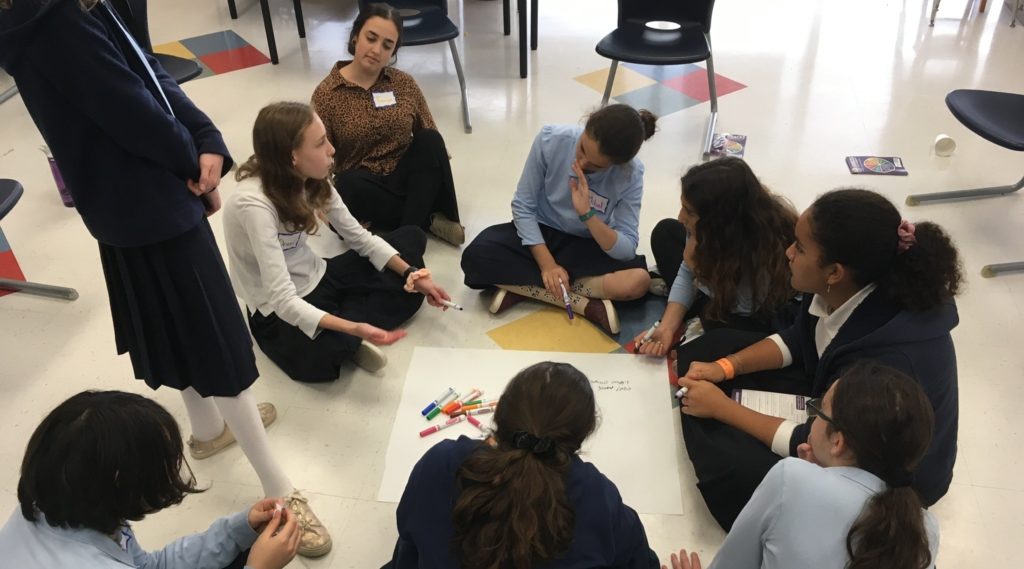 In normal times, the Jewish Family Service of Greater Houston holds in-person resilience workshops for Jewish teens. Since the outbreak of the COVID-19 pandemic, they have been happening over Zoom. (Courtesy of JFS Houston)

“The primary focus is finding strength in your life by looking at true norms,” she said. “While there are a lot of negative stories in the media about the coronavirus, the majority of the population are healthy and most who get it actually recover, especially among young people. Resiliency to it is the true norm.”

Many Jewish community professionals who work with teens say that the crucial element of their work now isn’t so much the content of one particular program or another but connecting with teens during this time of social isolation.

Marna Meyer runs the Teen Israel Ambassador program through the Jewish Federation of Greater Houston. In ordinary circumstances, the program helps teens prepare for college and learn tools for college activism around Israel. But right now, she said, simply connecting with each other socially has become the highest priority.

“They’re feeling lonely and isolated,” said Meyer, a therapist by training. “All the phone calls, texting and Zooming isn’t the same as being with each other.”

“We’ve been really conscientious in looking for red flags,” said Rabbi Dena Shaffer, executive director of 4Front, a program run by The Associated: Jewish Federation of Baltimore, which serves as a gathering place for Baltimore’s Jewish teens to explore their Jewish identities and the issues that matter to them.

Shaffer and Meyer both said if they notice teens dropping off from programming, they make an extra effort to reach out to them. 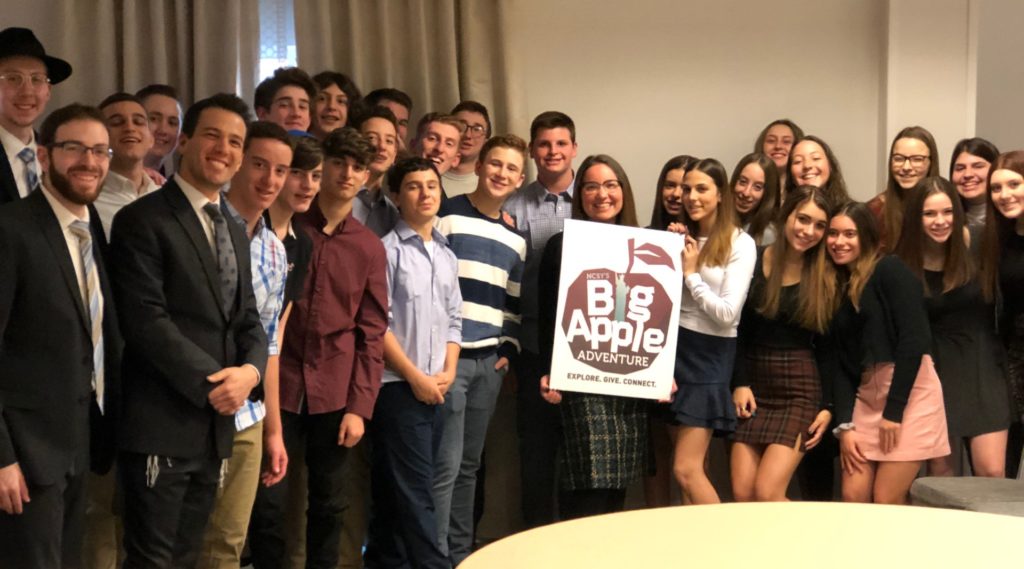 The Big Apple Adventure is a trip to New York for teens from the Midwest Region of the National Conference of Synagogue Youth. The last such trip was in February 2020, right before the outbreak of the COVID-19 pandemic. (Courtesy of the Jewish United Fund of Metropolitan Chicago)

Some teens have had a difficult time adjusting to living their lives almost completely online, said Margie Bogdanow, a Boston-based consultant who works as wellness coordinator for the Jewish Teen Education & Engagement Funder Collaborative.

The trauma of this experience should not be understated, Bogdanow warned.

“This is a trauma for everybody and a trauma for the teens,” she said. “Often when people are in a trauma, they don’t express it in that moment. You see it much later.”

At the same time, many of those who work with teens say they’ve been impressed with how quickly Jewish teens have adapted to this new reality.

Across the country, teens who are part of Diller Teen Fellows, an international program with 32 global communities, including one in Chicago, created a series of “fellow spotlights” where they present or lead an online conversation on a topic they are passionate about and engage their peers in discussion.

In Chicago, an April 30 event honoring 18 teens in a Jewish leadership program called 18 Under 18 was canceled. But the teens took their Jewish leadership initiatives online, or continued already existing remote collaborations, including projects on Holocaust education in public schools, the diversity of Jewish experiences and religious pluralism.

“We have some amazing leaders who are trying to figure out ways to give back, even if they can’t do so in person,” said Sarina Gerson, assistant vice president for community outreach and engagement at the Jewish United Fund of Chicago. “Many teens want to continue their involvement in volunteer projects and social action, even if it has to happen in their own homes. They’re looking for an outlet to channel their energy in productive ways.”

Gerson said the teens she works with who have leadership qualities see the pandemic as an opportunity to make a difference in the community.